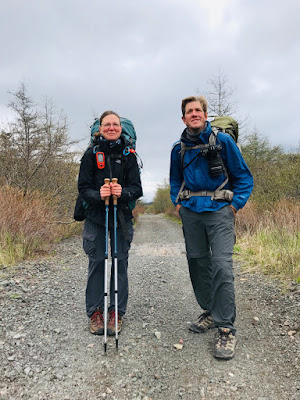 Sonya Richmond and her hiking partner, Sean Morton, are trekking across Canada on the Great Trail for the next three years.
- Daniel Baylis Photo
Sonya Richmond has quit her job, sold her house and other possessions, donned a 20-kilogram backpack and is hiking for birds.
The trek is going to take awhile.


For the next three years, she and her hiking partner, Sean Morton, will be walking the Great Trail from Cape Spear, N.L. where they started on June 1, to Victoria, B.C. and then north from Fort Saskatchewan, Alta. to their final destination, Tuktoyaktuk, N.W.T.

“Every day we see something new. It sounds cheesy, but every day is a ‘wow’ day,” said Richmond from Port Hastings, Cape Breton. The next day they cross the Canso Causeway to mainland Nova Scotia.

At 24,000 kilometres, the Great Trail – formerly known as the Trans Canada Trail – is the world’s longest pathway. Only one person, Dan Meise, has officially walked the length of the trail. A few others, including Garden Bay filmmaker Dianne Whelan, are also making the effort, but this is the first time any group has made the attempt for a cause, according to Richmond.

Richmond and Morton’s mission is to promote youth engagement in nature, especially through birding.

Richmond, who has a PhD from University of Toronto’s Faculty of Forestry, took leave as an ornithologist and GIS analyst for Bird Studies Canada, where she has been working on Provincial Bird Atlases.

“We were finding in our own life, we had desk jobs and were on the computer a lot and were getting sucked into this digital world, more and more and more, and a family member became addicted to video games and was struggling to get any kind of balance in his life,” said Richmond, when describing what inspired the pair.

As they have hiked they’ve found the desire to escape digital landscapes for real life ones runs deep. “So many people relate to that same problem,” Richmond said. “That’s something that really resonates with people … the need to find a balance.”

Since June the pair have hiked 1,100 kilometres to cross Newfoundland and are now traversing Nova Scotia. Their primary partner in the hike is Bird Studies Canada, a leading Canadian conservation non-profit. They are also partnering with other provincial non-profits, and are funded through a grant and sponsorships.

They plan to get the word out and reach out to youth to connect them with nature in whatever ways they can, including presenting at schools and at National Parks. They’ll have plenty of opportunities as they move through about 15,000 communities over the stretch of the hike.

Data collection is another mission. They’re making a list of all the birds they see, which they hope will be useful for researchers and other stakeholders. Highlights so far are colonies of Atlantic puffins at Witless Bay Ecological Reserve, colonies of tens of thousands of northern gannets in Newfoundland, and a few bald eagles.

There is plenty of bird diversity in Canada, Richmond said. “All you have to do is go outside and look.”

And that’s exactly what they’re hoping to inspire youth to do, but with the added twist of welcoming a balanced approach to using technology. “We are encouraging kids to get into citizen science,” Richmond said. That could mean showing them free mobile applications they can use to identify birds. “They’re out in nature, they’re looking at it, they’re engaging with it but they’re also using their phones as a tool as opposed to just scrolling through it and looking at YouTube and Facebook.”
It’s too soon to say when exactly the pair will make it out west. First they have to contend with winter – they plan to break for January and February – but they do expect to trek the Sunshine Coast portion of the trail.

Richmond’s parents live in Davis Bay and she has been visiting the Coast for the past 15 summers. Hikes up Soames Hill outside of Gibsons were part of her training regime, and they purchased supplies and guidebooks from local businesses.

The trip is also making Sechelt home for another reason – their house was sold to help fund the trek. “We were based in Ontario [but] my home address is in Sechelt because we don’t have our house anymore.”