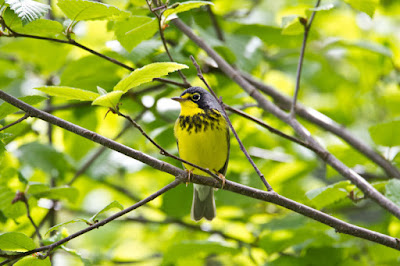 I started birding by accident, intent on spending a year identifying the trees of Eastern Canada and instead falling in love with their feathered residents. In the space of a couple weeks I went from a lifetime of apathy toward birds to an abiding obsession, departing my home most mornings and every evening with camera in hand, hoping to add a few more species to my list. Sparrows, warblers, vireos, woodpeckers, finches, hawks, harriers, ducks and many more, all within walking distance of my humble country homestead. Of all the flora and fauna making up Maritime ecology, none are as diverse, accessible and objectively beautiful as the birds, and most of us have absolutely no idea how fun it can be tracking them down.

In case you can’t imagine such a thrill, consider Pokémon, the international television and gaming phenomena which has inspired millions of people to “catch” as many fictional creatures as possible, sometimes literally by going outside and looking for them through their smartphones using the app Pokémon GO. Birding is no different, speaking to a deep desire in the human heart to find something rare and beautiful by way of skill and endurance.

Another fair comparison is hunting, depending on one’s instincts, patience and stealth to achieve the best possible angle on another living thing. Even if birding ends with photos rather than fatalities, the emotional surges are much the same. Birding even has a relationship to sports. Several times now I’ve birded competitively, trying to tag as many species as possible in a limited window of time, literally sprinting through thick coastal forests and thorny bush in pursuit feeding kestrels, another rare mark against my opponents. I once spent the better part of an hour chasing the song of my first Canada warbler and when I finally found it, perched on a branch perhaps a metre in front of me, my heart stopped and my hands shook.

Birding is a powerful thing which I’ve had the privilege of introducing to others, even to young men without a natural bone in their bodies, falling under its spell with a few eventful outings. While birding is often considered the domain of retirees, it’s in fact not for the faint of heart, having taken me into the extremely hot and extremely cold, into heavy rain and oppressive dryness, to coastlines, ancient forests, midwestern prairies, mountaintops and remote islands across the country. But birding is not merely an excuse for exercise or a promising hobby. More and more it’s being harnessed to save the planet.

Research at Ontario’s Trent University has demonstrated time and again that our willingness to defend the natural world is directly proportional to our relationship with it. The more time we spend outdoors, the more species and ecosystems we can identify and and navigate, the more we form connections and memories with natural setting, the more we are fundamentally concerned with its protection and survival. This isn’t hard to believe, but now the data has borne it out, revealing the pandemic disconnection which is allowing us to destroy our home, hand in hand with the solution. This growing revelation about our so-called “nature relatedness” has inspired international conservation organizations to re-establish the public’s connection with nature, and birding has become a favoured tool. Having experienced its might myself, I think they’re on the right track, if only we can encourage the skeptical masses to give it a try.

In an effort to do exactly this, Dr. Sonya Richmond and her partner Sean Morton took the inspiring step of selling their house in southwestern Ontario, donating the majority of their things, quitting their jobs and walking the entirety of The Great Trail, which stretches from Cape Spear, NL, to Victoria, BC, and north from Edmonton, AB to Tuktoyaktuk among the NWT, birding all the way. The journey will take them four years with breaks during untenable weather, and it’s their intention to make regular stops along the way, encouraging people by way of presentations and guided hikes to take birding seriously. They’re also taking this opportunity to impress upon people the dire state of our native birds, what can be done locally and nationally, and the apps people can harness to improve their birding and participate in citizen science, namely iNaturalist and eBird.

In total they will walk 24,000 km, spending most nights in tents. It’s an extraordinary undertaking which is, at this very moment, playing out in New Brunswick. I managed to track these outstanding individuals down in Charlottetown, PEI, a twist of fate putting us in the same city on the same day. They were fresh from Nova Scotia, where they’d deviated from The Great Trail to see the Cape Breton Highlands and Annapolis Valley, both of which rife with birds. By the time I sat down with them, they’d identified some 129 species.

“The trail brings something new every day,” Sonya told me. “It sounds kinda cheesy, but it’s true.”
We live such organized lives, shuttled from one familiar point to another by way of car, shielded from the unexpected and missing the routine oddities an adventure like this would guarantee. Theirs is a beautiful undertaking, and so far the highlight was a great horned owl which stayed with them on the trail for sometime, a beautiful bird I’ve only seen once and for a split second.

Of particular concern for Sonya is the Boreal Forest, the world’s last great wilderness which stretches across Canada and contributes to the makeup of Maritimes woodlands. It’s known as the bird nursery of North America since that’s where they nest, and we’re tearing it down to make toilet paper. The recent news that there are 3 billion fewer birds in North America now than in 1970 brings the Boreal’s plight into sharp focus. Sonya is sharing these disheartening crises on the trail as well, and encouraging everything from bird friendly yards to donations toward bird conservation.

I’m a very amateur birder, eager to spend spare afternoons in search of something wonderful overhead, while Sonya has harboured a love of birds for sometime, previously working with Bird Studies Canada and now birding full time in their defence. It will never cease to amaze me the hold birds have over the people who dare to look, recruiting us as guardians with flashy feathers and a pretty song. Given the steepness of their decline, it’s time we all paid attention, and it starts with a spare hour and a set of binoculars.

Zack Metcalfe is a freelance journalist, columnist and author active across the Maritimes
Shown above is a Canada warbler in Ontario’s Algonquin Provincial Park. Zack Metcalfe photo