While trekking Sean likes to talk, or rather lecture about the ‘arc of every great adventure’.  From Odysseus, to Dante, to Huck Finn, to Fodo Baggins and Harry Potter every great adventure – or so he claims – takes a seemingly average individual, propels them through harrowing experiences, provides temptations along the route, and makes them face heartbreaking truths about themselves - all of which challenge the resolve of the protagonist.   Ultimately every character, in order to get to their goal, must also – either literally or metaphorically, go to hell.  En route each quest must come to the brink of ruin and overcome that moment to continue on.   It is only by being challenged in every way and overcoming these obstacles that the explorer can redeem themselves and achieve their goal.

Well this week we have been challenged.

As might have become evident over the past couple of years of hiking and our blogs, Sean has the unenviable task of either being in the wrong place at the wrong time or having to learn the hard way.  So this streak continues this week.

You will notice that we have not posted our regular blog entries since leaving Sudbury and aside from the usual reasons for us not getting material up, these past few days have posed a number of profound challenges – ranging from long stretches of trekking on the Trans Canada Highway, to moments of profound temptation in form of offered rides which would take us past the roadways, to serendipitous acts of kindness and generosity which have kept us going - to near tragedy on the roadway a couple of days ago.

Two days ago Sean was fortunate enough to avoid serious injury while we trekked along one of the road sections of The Great Trail in Northern Ontario.  As we noted in our usual (but as of now unpublished) blog, while venturing down one of the countless dusty gravel roads a pickup truck filled with waste and debris - uncovered and unstrapped down - raced by us.  While the driver was kind enough to give us room as he drove by, either the motion of his vehicle, a chance gust of wind or merely fate sent a piece of wood flying out of the back end catching Sean on the shoulder and putting him on his back in the ditch.  At the time I was a dozen feet away and stunned that so much had happened so quickly. I raced up to him to find him already standing back up but cursing up a storm. I couldn't figure out what was wrong and then realized that while he was not hurt that his lens and camera had taken the brunt of the impact.  His lens cap was shattered and the crack in the lens itself was immediately evident.  The body to his camera was cracked, and even the mental camera clip and shoulder strap on his backpack were cut through with the impact.

He hoped for the best - having already put both pieces of equipment through a lot on his own - but our hopes were dashed when he went to take the next image.   The crack in the lens leaves a streak of light at the top and whatever is wrong in the body is leaving the black bar.  It was immediately clear that his main camera and lens were done for. 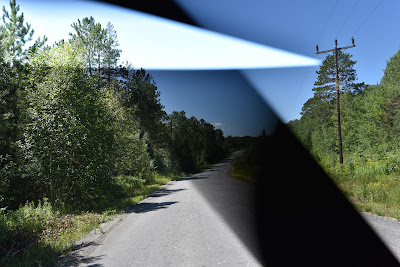 Given the circumstances and the luck of no one getting hurt I don’t feel that we can really complain, but it is costly problem that we lack the funds or time to deal with.   Just as Sean’s frustration at his being unable to avoid the impact is energy wasted which we also have no time to deal with. Regardless we resolved to try to find a solution as soon as we arrived into town.

Today, working with my cell phone camera – but disgruntled at all the miss opportunities we continued and arrived into the town of Espanola Ontario with the hopes of finding a replacement, arrange for a quick repair, or just take a break after this set back.

Now, to better understand what happened next I have to explain some things.

Several years ago, working as a University Teaching and Research Assistant he was asked to substitute for a colleague in another department – Visual Arts.  This of course was and is not Sean’s field, his competing focuses being American History, Canadian Print Culture, and Literature.  Regardless, he has given classes in photography, taught photographic editing in the past and so felt confident that he could handle a few hours of instruction.

For those who know Sean, or who have taken one of his tutorials this comments would come as no surprise.  He is a firm believer of talent and the experiences gained from just getting outside and taking pictures far outweigh the importance of equipment and technology.  For him, many photographers focus too much on the newest, biggest, and most advanced cameras rather than perfecting their craft.  He likes to remind people that Ansel Adams and Dorothea Lang had cameras that by today’s standards are primitive yet they produced amazing works of art and representations of our world.  They used their cameras as tools towards telling a timeless story.  Their images aren’t pixel sharp but what they convey has shaped how we look at nature and our society.  Sean’s perspective is the result of years of meeting too many people who have spent thousands and sometimes tens of thousands of dollars on cameras only to be confused as to why they aren’t taking ‘great pictures’.  Sean, in his politically incorrect way, likes to say ‘today a talented kid with a cell phone could easily produce a better image than a professional with a 5000.00 dollar digital camera’ because it is ‘about capturing the spirit of a moment not about crystal clarity.’  Because of this perspective, I have watched him get mad at photography competitions when judges declare that one image must be better than the other because of the camera or equipment used.  Over the years we have both seen amazing images produced by young talented individuals get ignored by professionals because they don’t have ‘the right gear’.

For Sean photography is about creating pictures in different ways, learning, and seeing what anyone could do next with how they capture a moment or our world – and that you can do with anything from a paint brush, to a cell phone, to a DSLR.  It is not about the technology.  However, because this type of comment flies in the face of what so many in the camera industry, in photography clubs, and online forums promote and believe, unsurprisingly, Sean’s comments have met with a huge amount of negative criticism over the years.

Today as we trekked into Espanola to ship off his Nikon D750 and search for a camera store – true to the form of Sean’s life – he ran straight into a lady from the class he guest taught years ago.

She was surprised to see him again, was excited to hear about our trek across Canada and the possibilities for getting youth reconnected to nature and of course for the types of pictures that could be taken.  As the conversation went on – Sean feeling mad and sorry for himself (and his camera) – lost his patience and told her that we had to get going to the post office because of what happened to his Nikon.  Then without prompting, he told her everything.  The story and pain poured out of him, as did his fear that the entire possibilities of photographing the country was done because of the costs and delays now involved.  To this intelligent young lady’s credit, she listened patiently and when Sean was done….she laughed.

No she did not laugh at him, but instead she laughed at the situation.  Her response surprised both of us, and hurt Sean.  He had thought that a fellow photographer would be the most sympathetic and understanding of his feelings.  Instead all she said was “Well, you are fine and my guess is that everything is going to be ok.  You know why?  You have a cell phone on you.  I guess it is time for you to see what matters most in what you do.  Is it the technology or is it you?”  Without waiting for an answer she walked past Sean, pausing to whisper to him with one last comment “time for your test teacher….”.


His answer took a few moments in coming.  His face bounced between anger, disbelieve and frustration.  Then he stood up, looked up at me and said, ‘you know, she’s right, it’s time to get back on the trail.  We’ll figure this out somehow, but for now this is ok.’  He held out his hand and I gave him back my dated cell phone that he has long made fun of.

And so, for the next few weeks, until a replacement camera somehow arrives, Sean is putting his money where his mouth is.  It’s time to see if he has any talent left, or find out if he ever had any talent, or if it was all the working of a beautiful and horribly expensive machine that he carried around.  Until Sault Ste. Marie our trek and blogs – which we now refer to as Canada:  A View from The Trail – will be presented through the lens of a Cell Phone.

This will be a huge challenge for Sean who is his own worst critic and expects each picture to be perfect before it is sent out.

In a few days when we have time to catch up we will be posting all of our blogs from our wanderings in the city of Sudbury to the completion of our local Camino, to our time in the quiet community of Whitefish, to our arrival into Nairn Centre, venture into Espanola, and our day walking to Massey and Chutes Provincial Park.  They are all written and waiting to be uploaded they simply require a few images to be added to each!


Thank you for your patience.