It was a cool sunny morning when we headed out of Espanola. As we crossed the wide, deep Spanish River there was a lot of water flowing over the dam at the Domtar plant. The pulp and paper mill was in full operation, its smoke stacks pumping out plumes of faintly yellowish steam that filled the river valley. The golfers at the riverside course seemed used to the smell, which to be fair was far less pungent than the emissions from pulp and paper mills we've been down wind of in BC. 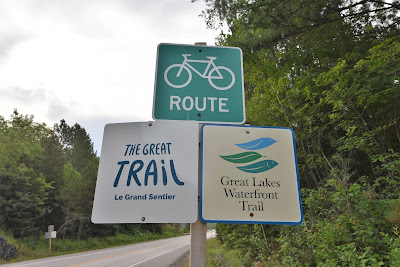 As we walked into the edge of town we passed the welcome sign and a monument outlining the history of the company town. It was interesting to see the old photos from the 1900's. The dam on the river was the same, but the huge mill complex had not yet been built. 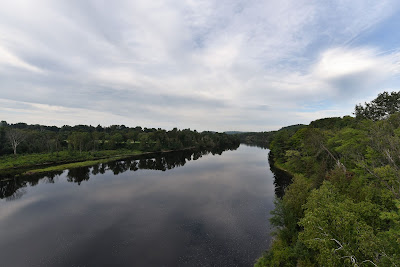 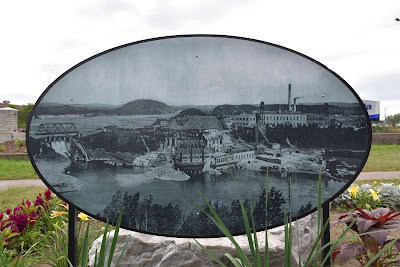 As we walked through town we passed a colourful mosaic celebrating the history and culture of the town. It was one of the Canada 150 mosaic murals that were created by the members of communities across Canada to celebrate the 150th birthday of our country. This one depicted a river driver along with a railway theme. 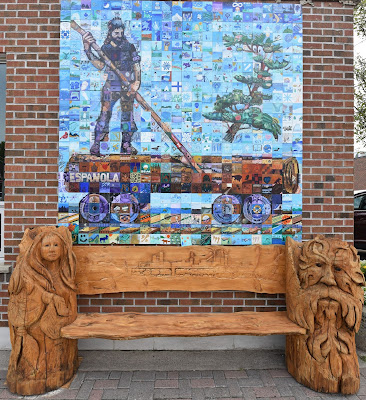 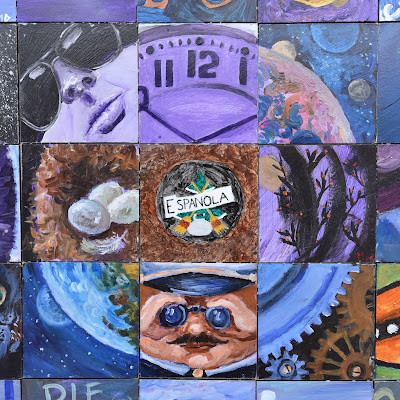 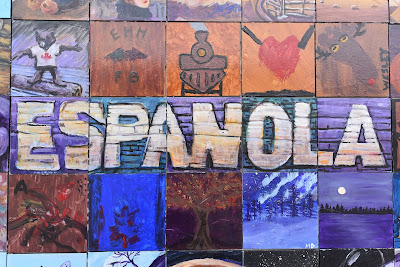 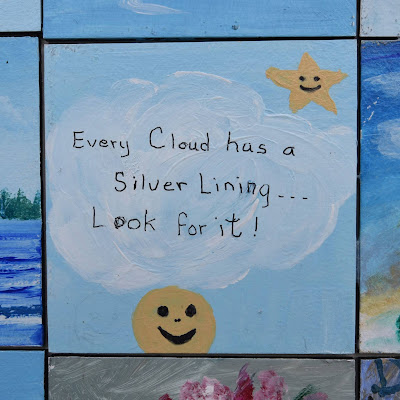 We walked through a quiet neighborhood and then onto Lee Valley Rd, which was a mostly paved, two lane road that we followed all the way to Massey. For the first 7 km we walked between white pine plantations. Occassionally we would pass a small cottage or home, but it was mostly quiet forest. We could still detect the smell of the pulp and paper mill for those first 7 km. 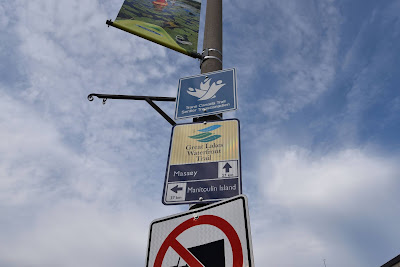 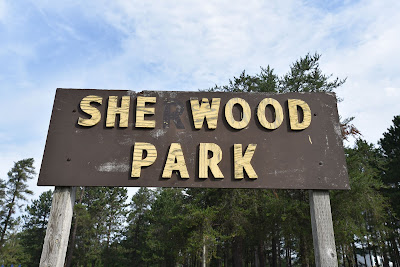 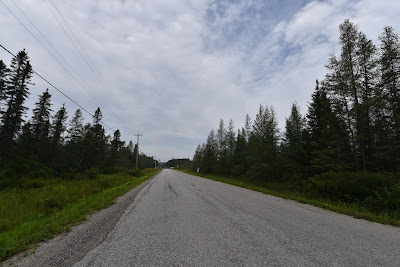 As we progressed we found ourselves surrounded by spruce bogs. The tall thin spruce trees jutted up out of a meadow of grasses, wildflowers, and low scrubby vegetation. Behind this riot of colour the dark shapes of the trees, forested ridges and rocky outcroppings rose up in the distance.   It felt good to be back in the amazing Boreal landscape that we've been missing since leaving Newfoundland. 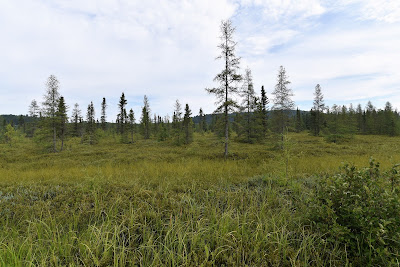 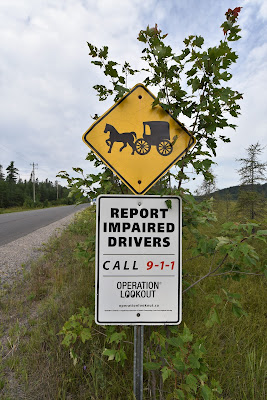 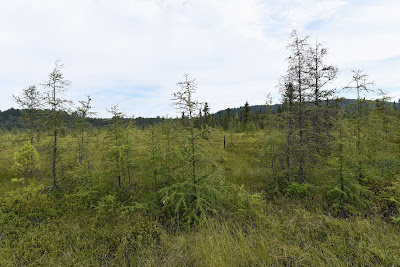 Over the course of the day we passed many bogs, mixed forests, and areas of open farmland. Hay fields were nestled among the dark hills and ridges. In some of these patches the round bales of hay were nestled in fields of bright yellow and purple wildflowers. In others, the recently harvested grass or grain left fields of gold. Wooden fence lines and picturesque wooden barns completed the pastoral landscape. 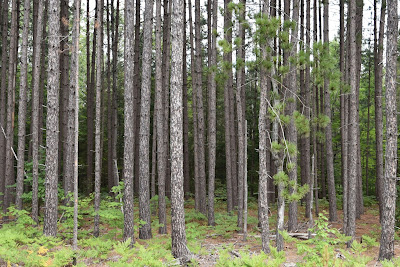 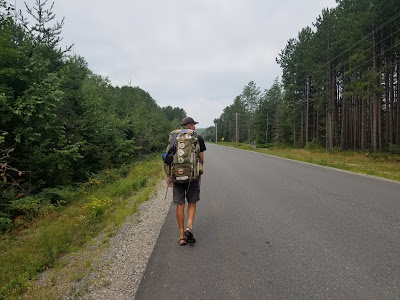 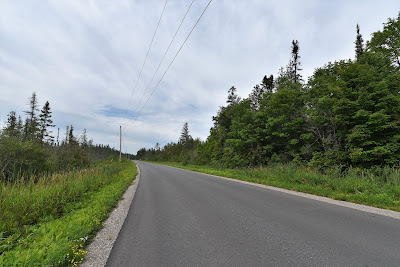 Around 15 km into our hike a cyclist who had passed us earlier stopped to chat on his way home. He said he cycled this road all the time, and was surprised that the trail would follow such a busy thoroughfare. Compared to highway 17 it was a treat, but the sound of the entire day was a car either approaching or receding into the distance. Sometimes lines of six or seven cars would pass us. Over the course of the day we began to wonder how, when the landscape essentially had two vehicles and us in it, we so frequently would all pass each other at the same point? 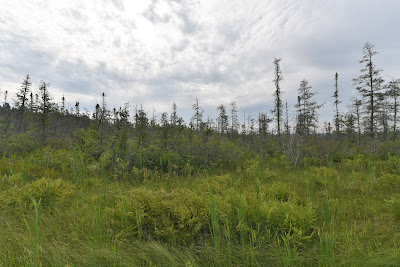 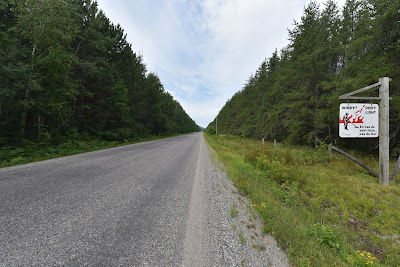 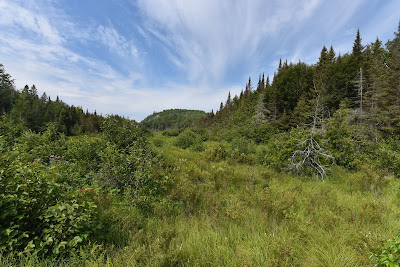 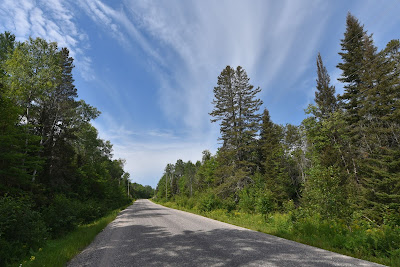 Towards the afternoon we began to pass billboards with quotations from the bible. We also began to pass road signs with horses and buggies, and we realized we were in Mennonite country. Apparently as land prices began to soar in southern Ontario, and as space became limited, Mennonite families began to move up north and reestablish farms on land cleared by settlers. Although farmland in this region is ultimately limited by the landscape, their children will be able to afford farms of their own up here. The meat, eggs, and fresh produce grown on the farms in this area are sold in Sudbury and at the Massey Farmer's Market. 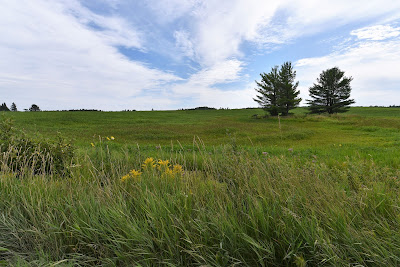 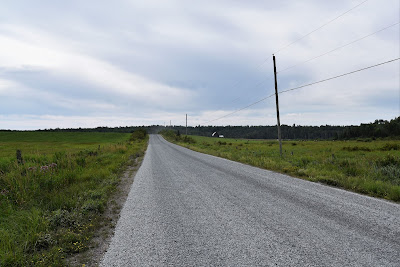 It was a largely pleasant but uneventful hike today. It was a hot, humid afternoon, dominated by the sounds of grasshoppers and crickets. We heard a flock of Sandhill Cranes in a nearby field. Groups of Canada Geese rested among the tall grass of horse and cow pastures. Occassionally a Turkey Vulture would circle overhead, making use of the updrafts from the hills. White-throated Sparrows sang in the forests periodically, and we spotted an American Tree Sparrow in a white pine at the edge of the road. Otherwise it was pretty quiet. 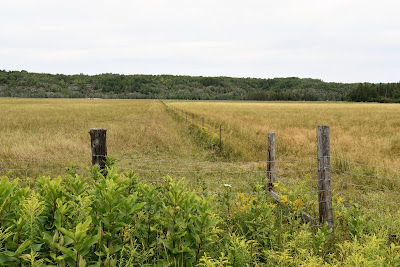 As we approached the town of Massey we saw a sign welcoming visitors to the Sagamok Anishnawbek First Nation. This First Nation, which is also known as the Many Rivers Joining Human Beings is a First Nations Band government. Sagamok's languages and culture are Anishnawbek and come from the Ojibwe, Odawa, and Pottawatomi bands. The Sagamok reserve has approximately 1400 members. In the early years of Canada's development the French from Fort La Cloche relied on the strategic location of the Sagamok to trade with the Anishnaabe people. 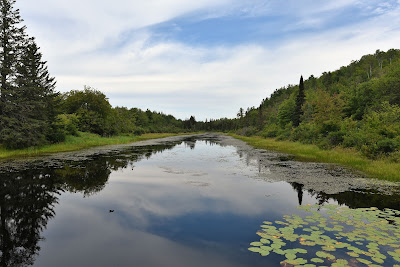 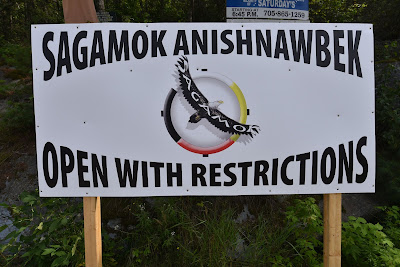 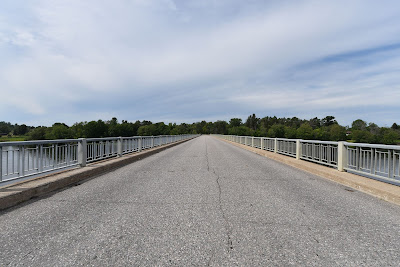 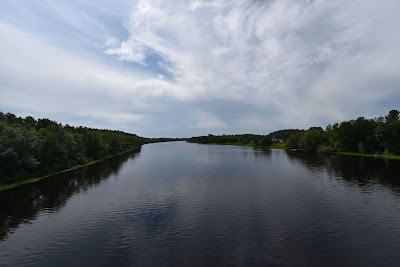 We crossed the Aux Sables River into the small community of Massey around 3:30 pm. We had hoped to camp at Chutes Provincial Park tonight, but unfortunately all the campsites are full. We explored the small town, which boasts a grocery store, a museum, several restaurants, and historical plaques throughout. There seems to be huge support for birds here - there is a lot of bird art around town, the garbage cans all have birds and bird houses painted on them, and the Home Hardware has a huge display of bird feeders and birdseed in its front window. What great spirit! 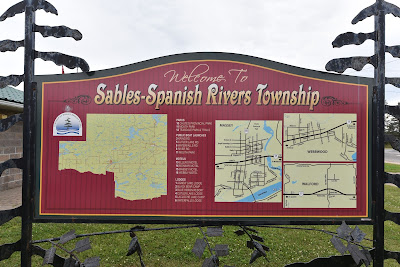 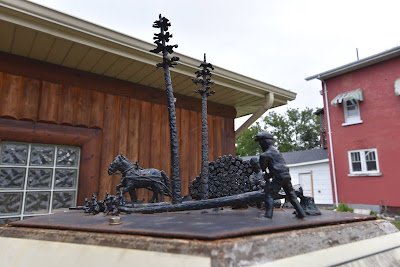