Manitoba features over 460 hiking, cycling, and cross-country skiing trails, and we were thrilled to kick off Season 3 of our #hike4birds across Canada on the beautiful Crow Wing Trail.  This 193 km long route is part of the 27,000 km long Trans Canada Trail, and it has been designated by the Canadian Company of Pilgrims as the Chemin St. Paul, a Canadian Camino. 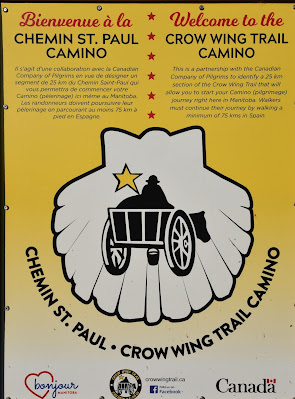 The historic Crow Wing Trail connects Winnipeg to Emerson, a small community on the Canada-US Border, passing through Saint Adolphe, Niverville, Otterburne, St. Pierre-Jolys, Saint Malo, Senkiw, the Roseau River First Nation,  and Ridgeville along the way.  It mostly follows the path taken by the Red River Ox-Cart Trail, which was used in the mid-1800's.  The route was pioneered by the Métis trader Peter Garrioch in 1844, when he and his crew cut a path straight north from Crow Wing, Minnesota to the Red River settlement.  He was attempting to avoid capture by Dakota patrollers and get back to the Red River Settlement before winter fell.

Today the Crow Wing Trail is a well-marked multi-use pathway that connects ten communities using country roads, community parks, bush and pasture trails, dikes, and road allowances.  Interpretive signs are located at points of interest along the trail, and many of the communities it passes through offer a variety of amenities, including overnight accommodations. We thru-hiked the trail during five days in July, beginning in St. Norbert, and making overnight stops in Niverville, St. Pierre-Jolys, St. Malo Provincial Park, and a small greenspace near Ridgeville before ending in Emerson. 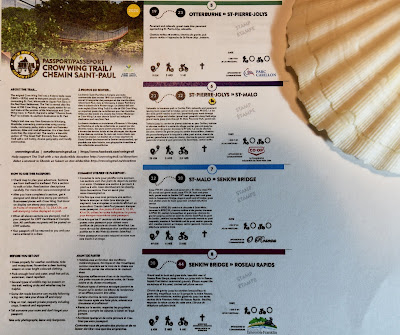 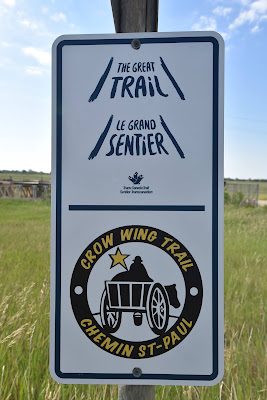 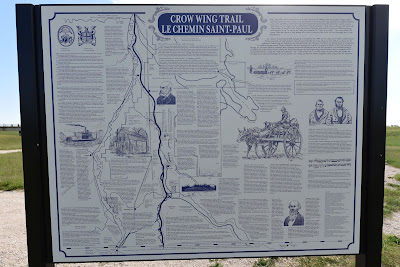 The trail is rich in history, with historical markers, cairns, cemeteries, and remnants of pioneer activity located along its length.  From the St. Norbert Heritage Park and National Historic Civil Engineering Site for the Red River Floodway located near the northern terminus of the trail, to the Pioneer Museum in St Pierre-Jolys, and the historic Fort Dufferin in Emerson, hikers and cyclists are afforded many opportunities to learn about early pioneer history on the prairies.

Among the highlights for us was visiting the Mennonite Memorial Landing Site at the junction of the Rat and Red Rivers.  At this spot a cairn marks the place where the first group of Mennonite settlers landed on August 1, 1874.   The Mennonites originated in 1500's in Switzerland, but moved to the Netherlands and then Russia in search of religious freedom.  In the 1800's the Canadian government was actively recruiting experienced farmers to help settle Western Canada, and many Mennonites answered the call. 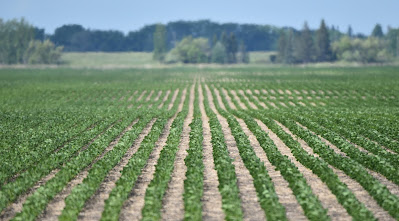 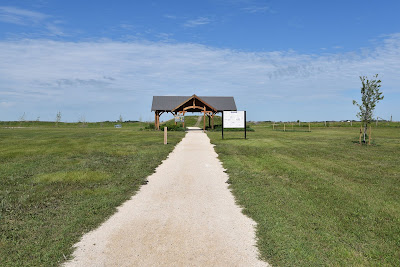 Another highlight was crossing the narrow and precarious feeling Senkiw Swinging Bridge over the Roseau River. From 1906 to 1947 local children, many of whom were of Ukrainian descent, used to cross the river at this point using a hand operated cable basket to reach their one-room schoolhouse.  The first swing bridge replaced the cable basket but felt into disrepair in the 1960's.  The modern version of the Swinging Bridge, which is a now a popular place to visit and have a picnic on the banks of the river for locals and tourists alike, was built in 2005 as part of Trans Canada Trail. 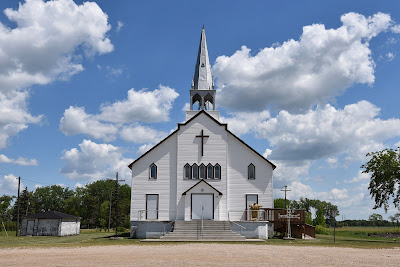 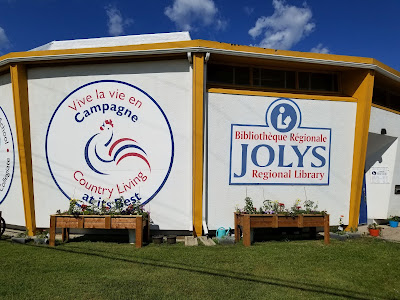 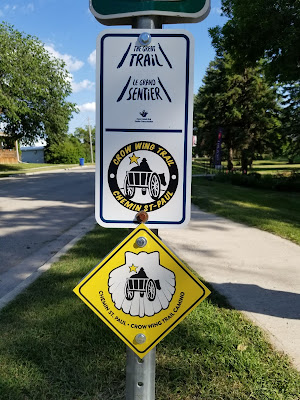 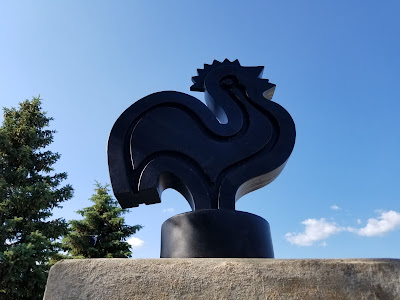 Another historical highlight was visiting the Our Lady of Lourdes Grotto and Shrine in St. Malo.  At the top of the riverbank stands a simple white and blue Roman Catholic chapel.  A forested stairway leads down the steep river embankment, and at the bottom is a grove of trees with rows of wooden benches placed among them.  Half way up the hill is a stone grotto with a statue of the Madonna standing below a crucifix.  The site was constructed in 1896, and is modeled after the grotto in Lourdes, France, where the blessed Virgin Mary is said to have made an appearance in 1858.  It was an incredibly peaceful, cool, shady, and calming place, and it is noted as an important place on the Chemin St. Paul. 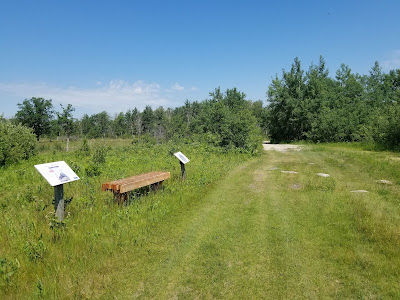 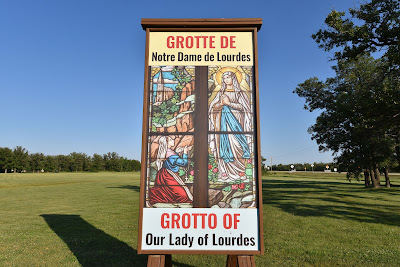 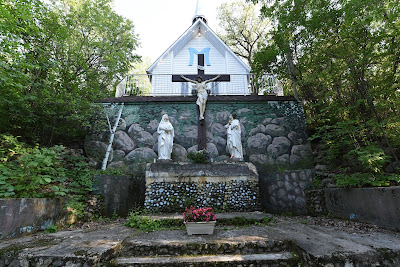 In the tradition of the world-renown Camino de Santiago in Spain, pilgrims along the Chemin St. Paul can collect stamps from businesses and enterprises along the route and submit their filled passports as proof of completion at the end of their Camino.  The Canadian Company of Pilgrims also suggests that pilgrims can walk a 25 km stretch of the Chemin St. Paul from St. Pierre-Jolys to St. Malo, and then walk another 75 km in Spain to obtain their Compostella in Santiago, which is awarded to anyone who walks at least 100km to reach the holy site in Spain.  This is a creative and unique way to being the Camino in Spain alive in your own country.

In addition to rich historical sites, the Crow Wing Trail also provides ample opportunities for experiencing the natural beauty and incredible wildlife of the prairies.  In July, the fields we walked among formed a patchwork of dark green soy leaves, lemon yellow canola blossoms, and light green wheat that swayed gently in the breeze.  Soft pink roses and sweet smelling wildflowers lined the gravel roads.  Most mornings we spotted White-tailed Deer bounding across the fields as the sun rose in a huge red disc above the horizon, and one afternoon we spotted a black bear and her two young cubs frolicking on the road ahead of us. 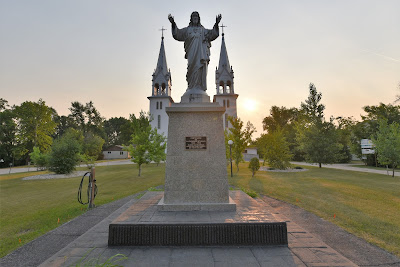 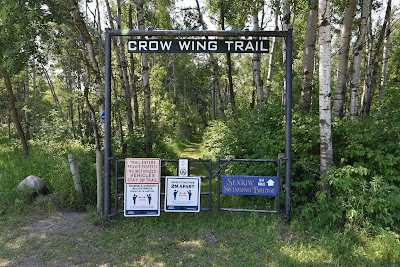 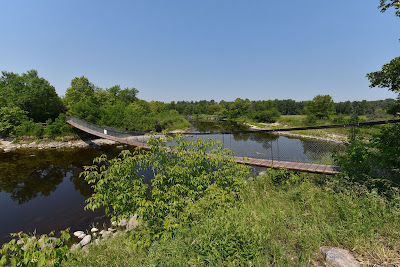 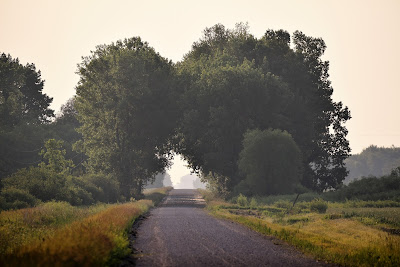 Clay-coloured, Vesper, and Savannah Sparrows, Western Meadowlarks, Bobolinks, Horned Larks, and other prairie birds were abundant.  Small patches of trees and wetlands hosted Red-headed Woodpeckers, Yellow-headed Blackbirds, and Black-billed Magpies.  We spotted Killdeer, Pectoral, White-rumped, and Least Sandpipers, Greater Yellowlegs, and flocks of Franklin's Gulls in municipal ponds along the way.  St. Adolphe was designated the Chimney Swift capital of Manitoba, due to the population of these endangered birds living in the chimneys of its historical buildings.  For visitors like us, who don't live in the prairies, this trail is a fantastic way to see and learn about prairie birds! 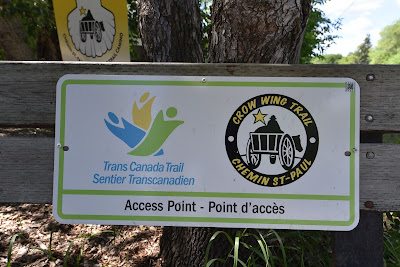 We thoroughly enjoyed walking the Crow Wing Trail, and with the exception of a short stretch of unmown grassy berm along the Canada-US border coming in to Emerson, it was easy to navigate and suitable for hikers and mountain bike cyclists.  Much of the trail is highly exposed, with very few opportunities to take shelter, so it is important to dress appropriately for the weather.  For us this meant carrying sun umbrellas, wearing sunscreen, and carrying a lot of water to stay safe in the summer's heat.  Sticky mud could be an issue in some sections in wet weather, and in winter warm clothing would be a must.  The Crow Wing Trail is the longest section of Trans Canada Trail in Manitoba, and we would highly recommend checking it out!

To read more about our adventures along the Crow Wing Trail and other parts of the Trans Canada Trail in Manitoba, please check our blog!