A new morning brought about yet another sign that the seasons are changing. 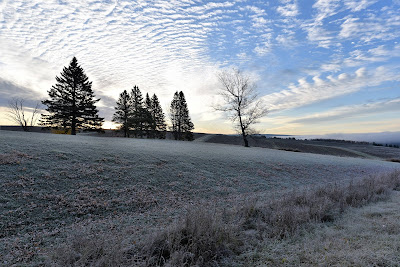 The rising sun turned the sky a brilliant pink, and revealed a valley full of mist. As we watched, the mist turned to gold and the trees, houses, and fields began appearing in patches between the shafts of light. Straight above us the clear blue sky was patterned with fluffy white clouds like fleece.
Underneath it all, the leaves, grasses, and late autumn flowers were coated in a thick layer of frost. As the seasons change they bring stunning beauty with them! 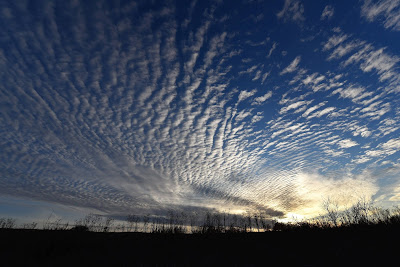 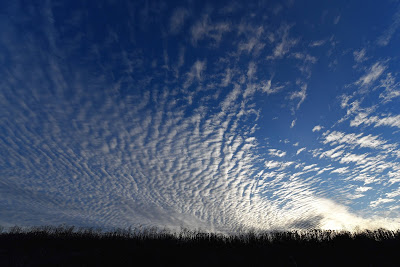 The path once again took us along the banks of the river. As the mist began to lift the trees on the opposite bank took on a mysterious and magical look. 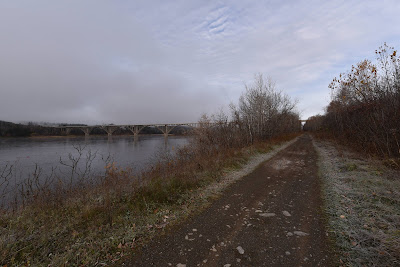 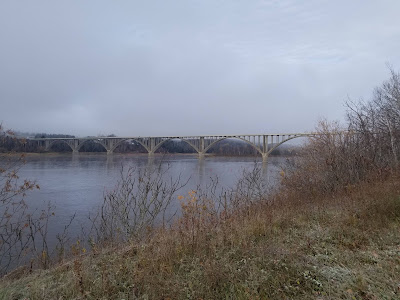 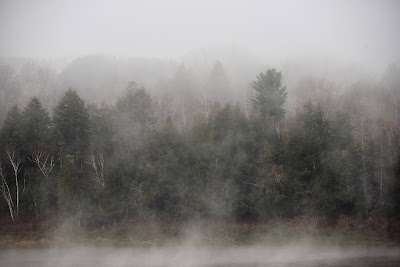 We were very pleased to find that the beautiful riverside trail of yesterday extended all the way to Bristol. It snaked back and forth across the road, and was generally an absolute pleasure to walk. 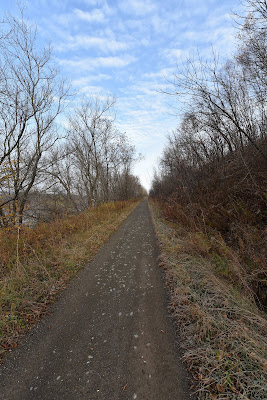 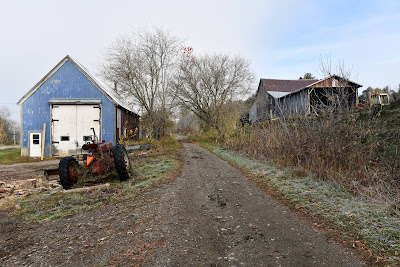 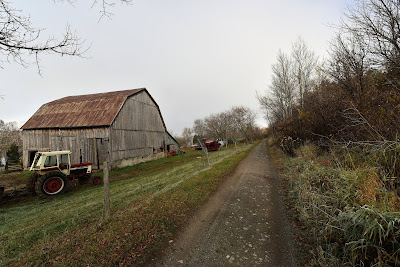 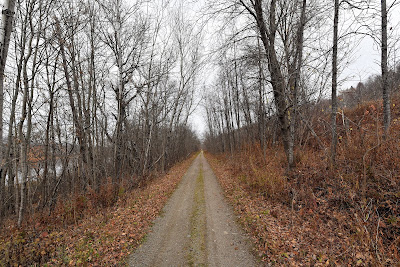 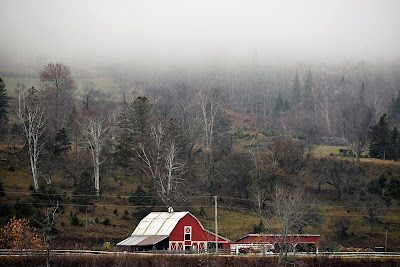 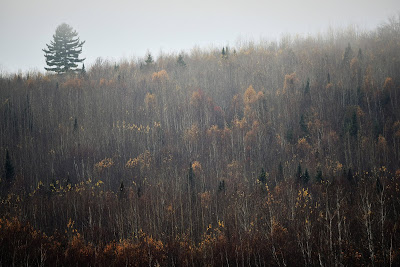 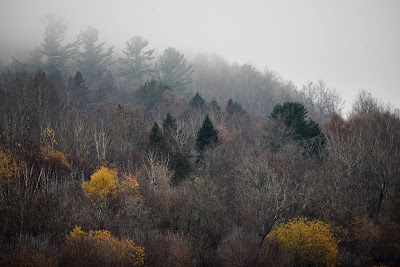 One of the highlights came near the town of Stickney, when we discovered a very interesting and cool Halloween display on the side of the trail! This kind of creativity and enthusiasm gives us hope for the future. 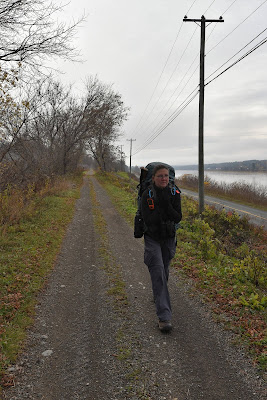 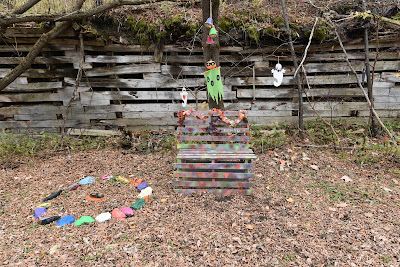 We did encounter a bit of mystery along the way as well. It took the form of a tall metal cone with a screen mesh top. I thought this structure might have been a kiln of some kind (for drying lumber?) but a search of online images suggests this is unlikely. 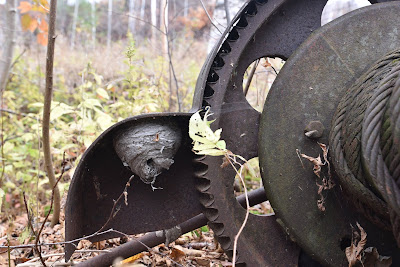 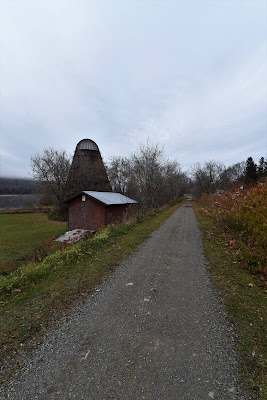 There was an old, large, and very powerful winch on the side of the trail near the mystery structure, but we were left stumped as to it's original purpose. Today is served as a roost for Rock Doves and American Crows.


It was another day of bird activity as well. There was an almost continuous stream of Ring-billed Gulls flying down the river in the same direction as us. We were also accompanied by the iconic sound that signals the shift from autumn to winter in many parts of North America - the honking of large v's of Canada Geese flying by overhead. They seemed to be heading in different directions. Presumably some were on their way to better feeding grounds in the area, while others were heading farther south for the winter. It felt like everything in nature was on the move. 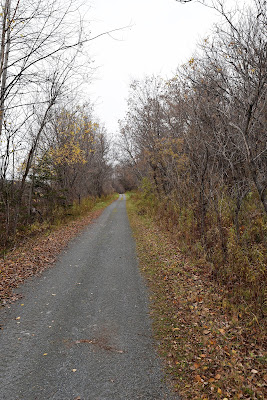 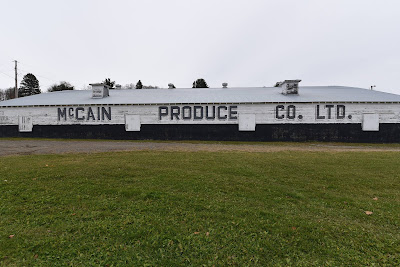 When we reached the riverside community of Florenceville-Bristol we discovered it is 'The French Fry Capital of Canada.' It is home to the corporate headquarters of McCain Foods, the largest producer of french fries in the world. It is also home to a large potato grower, as well as the New Brunswick Potato Museum (Potato World). Sadly the museum was closed when we passed through.The end of tourism season has begun to bring a number of disappointments to our world including the closure of many local museums, historic sites, and shops. 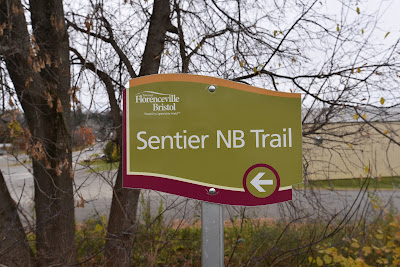 Florencevillle was originally known as Buttermilk Creek, but was renamed in 1855 to honour Florence Nightingale, the famous Crimean War nurse. Before European settlement the area was called Shiktehawk, which translates roughly as 'where he killed him.' This name derived from a battle that occured here between the Mi'kmaq and Maliseet peoples. This was an important spot for Aboriginal peoples, because the Big Shiktehawk and Little Shiktehawk rivers converge here, and they marked the beginning of a trade route across what is now New Brunswick. 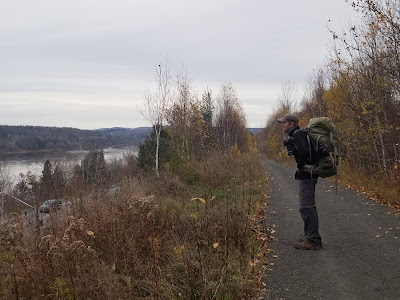 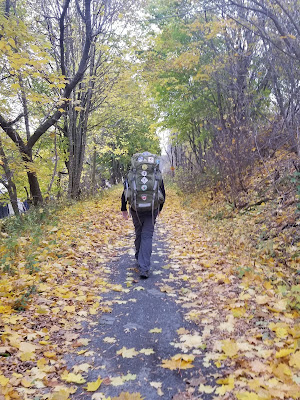 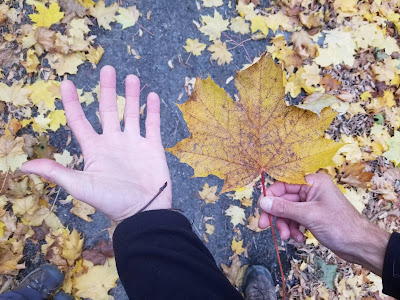 We stopped for a coffee at Tim Hortons, and were engaged in conversation with an interesting gentleman. He told us he was a leather smith, a former ship's cook and then captain, as well as a survivalist. He described his hunting tools and methods, as well as the wildlife he has spotted in the region. He mentioned there are mountain lions in New Brunswick, specifically in this region. This makes another elusive mammal to add to our list of creatures we would love to have the privilege of observing in the wild.

We end the day with little doubt that winter is knocking on the door. The temperatures are now hovering around zero at night, and the days are cool. With just over 160 km left before we reach the Quebec border, there is snow forecast for tomorrow. We will take it day by day, but the end of this year's trek is now clearly in sight.