Last night was clear and cold, and it brought a beautiful, sunny morning. As we walked out of Woodstock, the St. John River was still and smooth as a mirror, reflecting almost perfectly the treed hills, bridges, and houses along its banks. 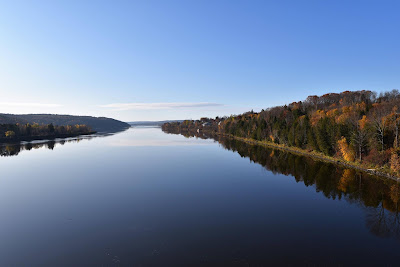 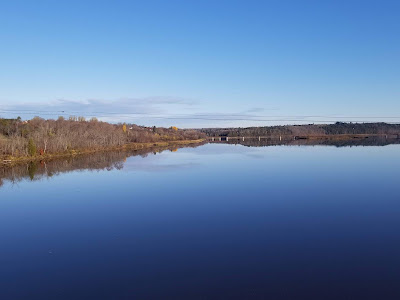 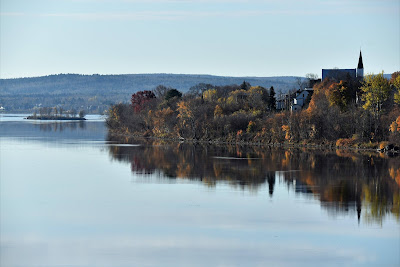 The walk between Woodstock and Hartland was only about 25 km, and it consisted of a lovely crushed stone dust track beside the river. We walked between the river and forested hills which were dotted with the occasional house. 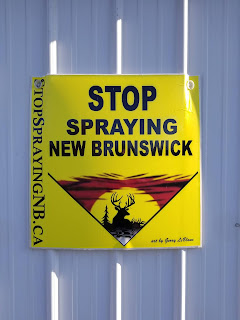 It was beautiful and very peaceful, and we thoroughly enjoyed walking off the road for a bit.

We were also fortunate to see quite a bit of bird activity on the river. There were many small groups of Mallards paddling along the shore, some of which took flight as we passed by. A Great Blue Heron flew low over the water, its reflection perfectly mirroring its every movement. A group of four Common Goldeneyes floated out in the middle of the water. A large group of Canada Geese rested on the edge of a small island. 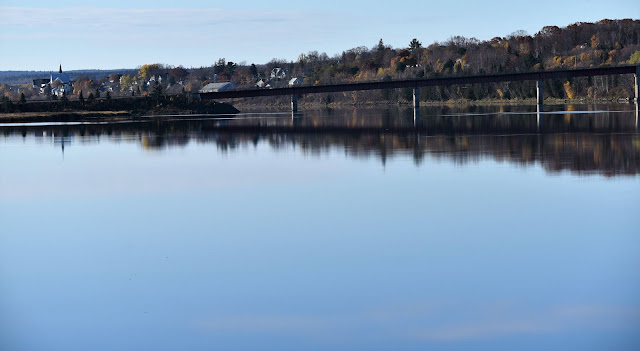 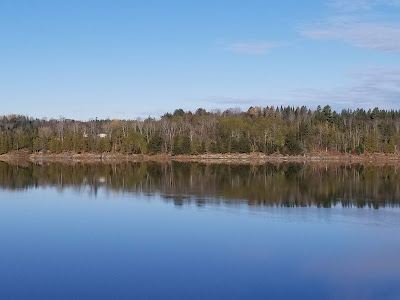 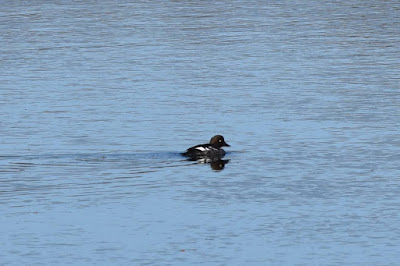 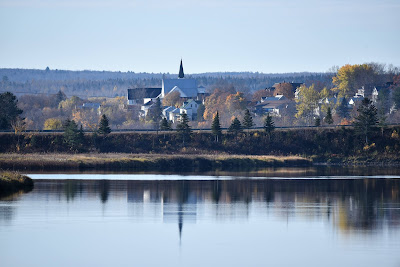 Curiously, even though it was a beautiful day and we were out on a lovely trail, we only met one other pedestrian. We were passed by four ATVs and one dirt bike, although happily they all slowed down and gave us a friendly wave as they passed. We were also reminded it is hunting season by hearing shots in the surrounding woods, as well as a couple duck calls. 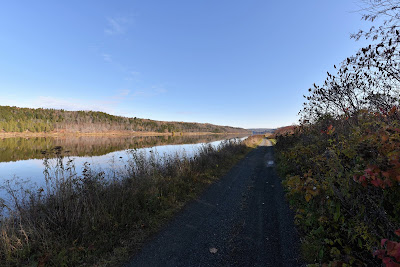 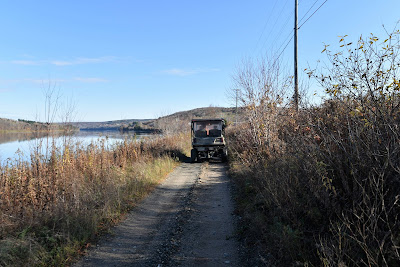 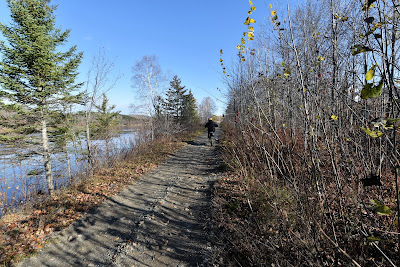 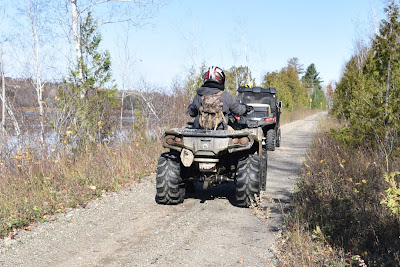 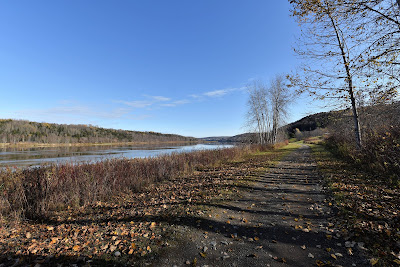 All in all we took it slow today, and enjoyed several breaks on the river bank. 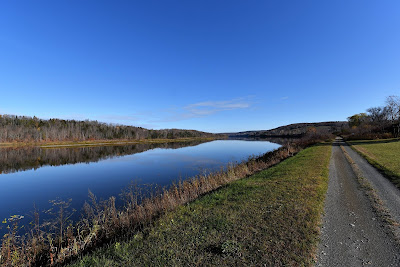 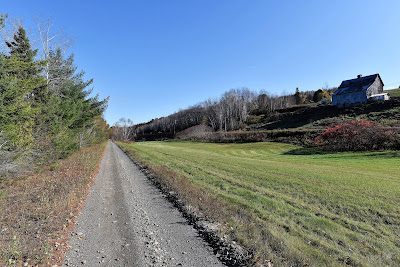 We were up late last night dealing with ongoing critiques and criticisms from various individuals and online groups. We spent much of the day wondering how society got to a place where the reaction to differing viewpoints is not discussion, but rather name calling, personal attacks, attempts to discredit the other voice, and demands that the other position be removed from consideration. The world isn't simple or easy, and it is full of people and groups with their own opinions, goals, agendas, and experiences. The world would be a better place if we could be more open to alternative viewpoints, and focused on building and sharing our own stories alongside those of other people, rather than trying to rip apart everyone that seemingly disagrees with us. In particular the online world is challenging because life and all of its complexities require more than 10 words to explain and explore or a few pictures to navigate through it.  There is always common ground, but we have to be willing to stand on it together rather than finding and focusing on the single outlying example or point of difference. The consequences of the online attacks of yesterday haven't been trivial for us - we have had a large number of disparaging comments emailed to us, lost a great deal, and lost a number of avenues for outreach - as a result we've once again been left at a loss to understand human nature.  It seems now, more than ever one person's 'opinion' whether founded or imagined has the disproportionate ability to reach so many and to change the course of people's lives.  As a result of all of this, though we were surrounded by beauty today, we nonetheless found ourselves tired, distracted, and somewhat discouraged.  As John Milton once wrote, "The mind is its own place, and in itself can make a heaven of hell, a hell of heaven..”  Today we trekked through the fall beauty of New Brunswick but our minds were stuck in the frustrations of the digital world. 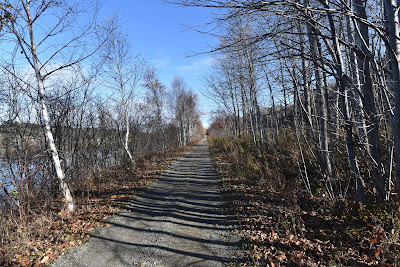 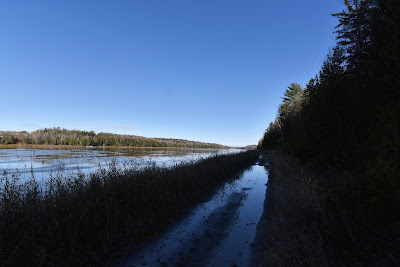 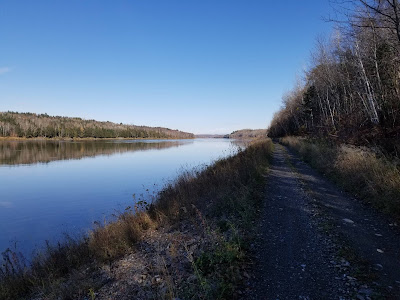 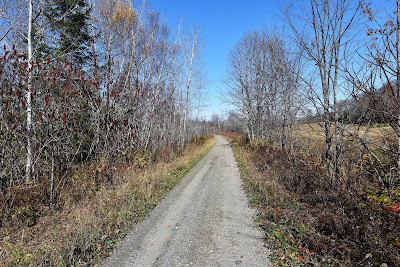 Whether because of us talking, me being stuck in my head reflecting on recent developments, or being tired and clumsy I stumbled on the shore of the St. John River.  The result of which was me falling face forward into a large pile of thistles and burrs.  A firm reminder from nature and the trail that it was time to focus on the moment and enjoy the day. 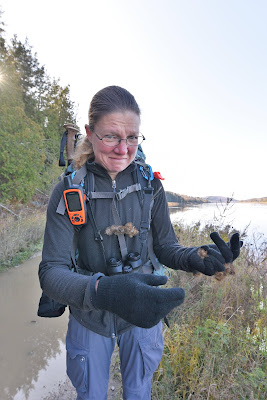 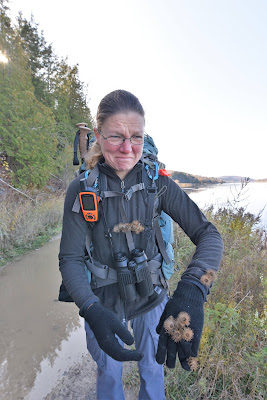 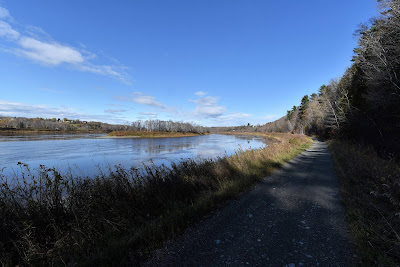 With that thought in mind we ventured onward enjoying the afternoon much more. 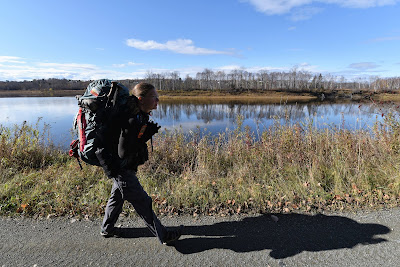 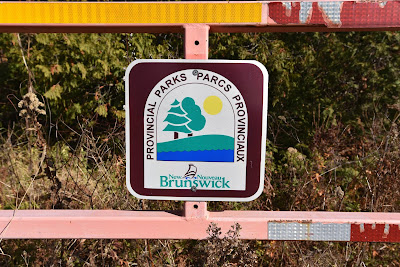 Hartland is a small riverside community that is home to the world's longest covered bridge. We got our first glimpse of it, as well as a much larger, arched bridge beyond it as we approached. Together they looked quite impressive!

Covered bridges were first built in North America during the beginning of the 19th century, when builders began using wooden trusses to span large distances.  To do this they incorporated iron rods into the bridge.  The covered bridge in Hartland is more than a century old, it spans 390.75 m, and it was designated a National Historic Site in 1980. 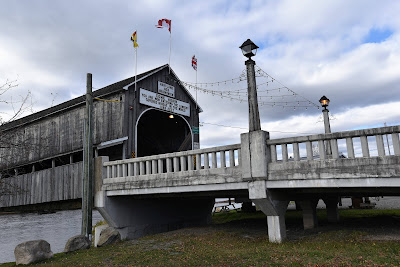 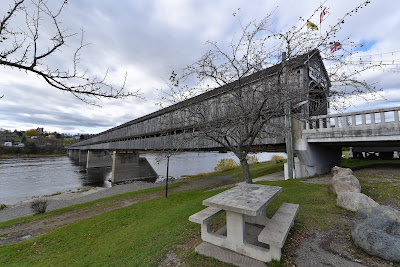 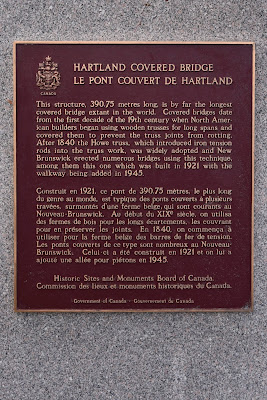 Although many of the small businesses and shops along the main street in Hartland closed, during the summer months this community offers opportunities to canoe and kayak the river, take a tour of the Covered Bridge Potato Chip Company, or visit its International Garden, which houses 50 species of trees and shrubs from around the world. 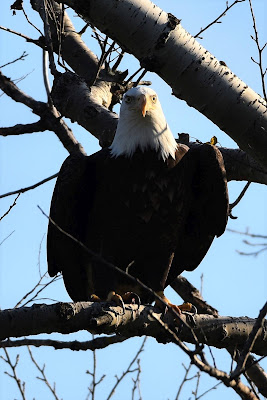 As we crossed a small pedestrian bridge leading to a park along the riverbank we saw a Bald Eagle perched high atop a tree. As Sean was photographing the majestic looking bird it launched itself into the air, making a wide circle before continuing silently down the river and out of sight. Eagles are symbolic of many things in different cultures. We decided to take this one as an omen of good things to come. 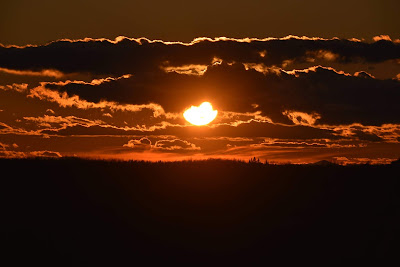 As two amazing trail angels recently shared with us 'There are good things down the trail, just don't stop walking."  Today as the negative emails and messages continued, we did just that, we kept walking.