Last night was cool and rainy, but we were very happy to discover that none of the predicted snow arrived. Although it was overcast, it was actually quite a nice temperature for hiking today. 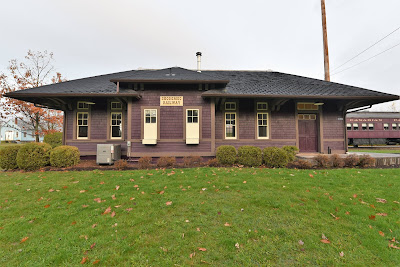 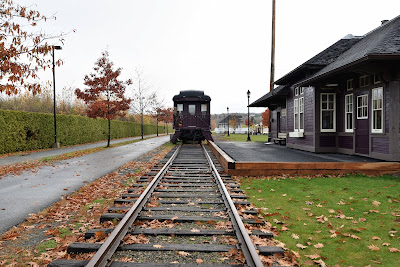 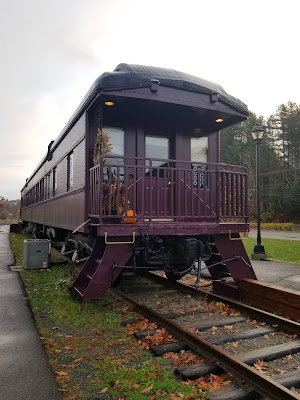 As we walked through the middle of Bristol, we passed the restored Shogomoc Railway Station, with its three newly restored 1930's CP Railway carriages out front. Although it wasn't open, there is now a fine dining restaurant in one of the railway carriages, where customers can sit in private booths while enjoying fresh, local cuisine. The other two carriages can be rented as a B&B. 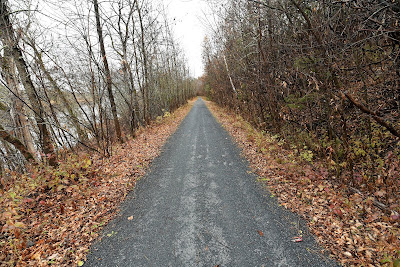 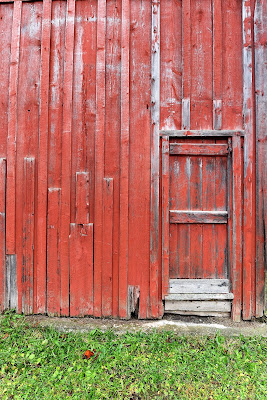 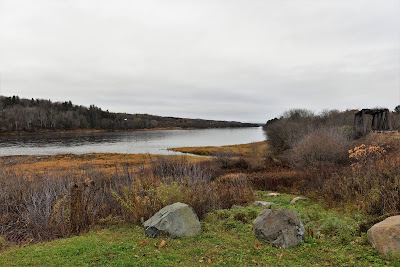 There was a nice landscaped walk out of town along the river. After we crossed a beautiful trestle bridge we found ourselves back on the treed gravel track along the the river.

We passed through the very small riverside community of Bath. Perhaps it is because we are heading into winter, and the summer tourist season is long done, but it seemed like most of the businesses and stores were boarded up and closed. 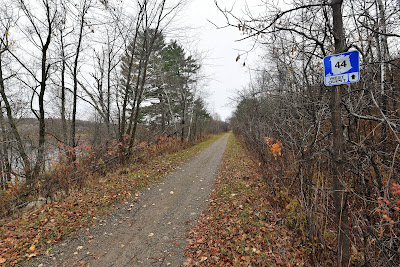 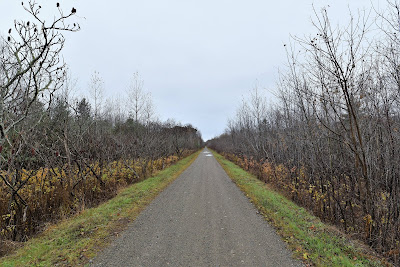 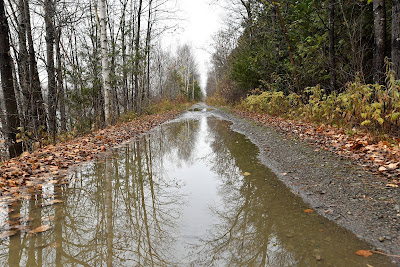 A few kilometers later we came to the Beechwood Generating Station. The trail passed quite close to the shore and the giant dam, and we could feel the vibrations in the ground and in our bones from the powerful water being held back. The powerhouse opened in 1955, and has a capacity of 113 megawatts. 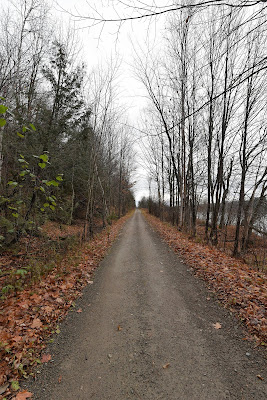 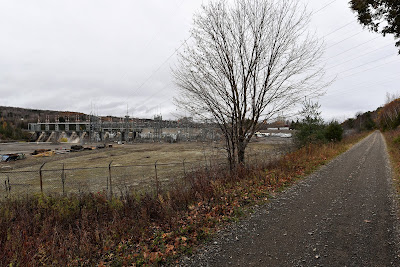 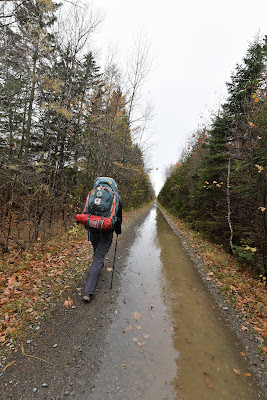 As we progressed along the riverside trail the surrounding landscape became progressively hillier throughout the course of the day. One of the highlights for us was coming across a pocket of high bird activity. There was a group of about 15 American Robins splashing about in a puddle on the trail. Above them a small flock of Cedar Waxwings foraged on bright red mountain ash berries. Black-capped Chickadees and American Goldfinches busily and noisily flitted back and forth among the conifers nearby. The energy and activity were almost contagious. 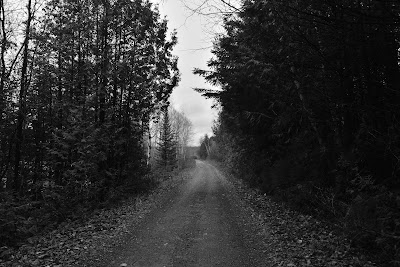 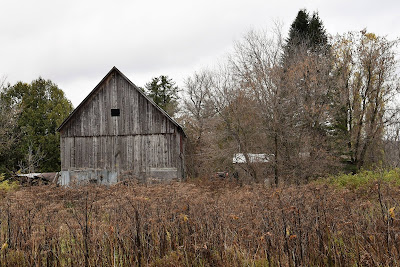 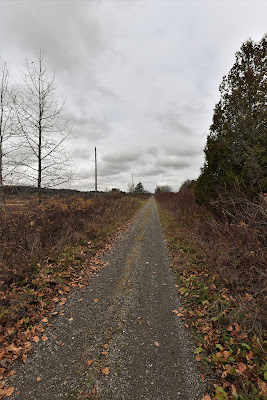 As we walked past multiple small communities along the river we were struck by the disparity that seems to exist between the more prosperous cities like Fredericton, and the more rural areas. Many of the houses and yards we passed were in need of repair and TLC, and some were abandoned. At one time the trail must have been an active railway that brought economic prosperity to these areas. That does not seem to be the case anymore. 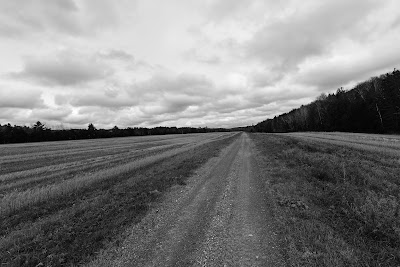 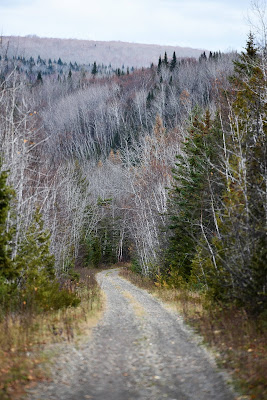 We also saw the telltale signs of a battle between ATV groups and other trail users along this stretch. There were huge concrete blocks barricading the trail entrances, as well as metal gates. Many of the locks on the gates had been cut, while other gates had simply been ripped out of the ground. Some of the concrete blocks had been dragged aside, and in other spots the ATVs had driven around the barriers, ripping up the ground on either side of the trail. It brought to mind the question we've been asking ourselves since Nova Scotia - is it possible for hikers, bicyclists, and snowmobilers to share a trail with ATVs, or are the goals and requirements of ATV users simply too different? 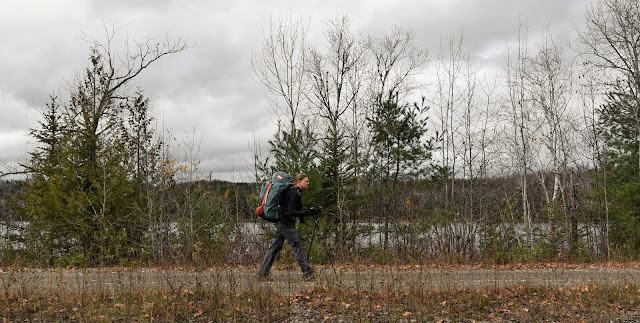 Our goal for tonight was the amalgamated community of Perth-Andover.  As we entered the small village we learned that its slogan is "where people and trails meet."  Three trails converge in this spot: the International Appalachian Trail, the Great Trail, and one of the Sentier NB trails.  Theoretically then it must be possible to walk from this point on a trail to all of Canada's coasts, to the state of Georgia, and across New Brunswick.  That is pretty cool! 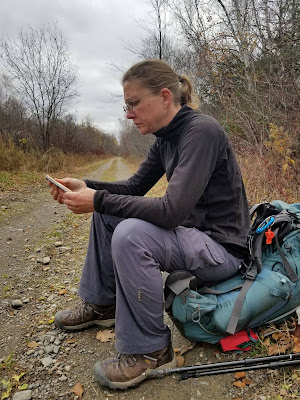 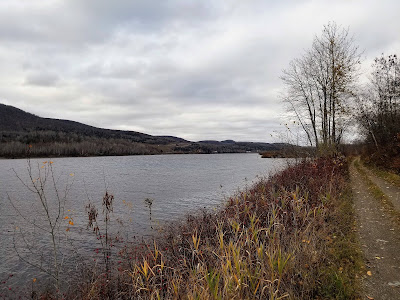 When we arrived on the outskirts of Perth-Andover we had walked 39 km. We were tired, hungry, and not too keen on spending another night outside, listening to the hunters at work in the forest around us. We decided to use some of our emergency funds to stay in a B&B at the edge of town. The place advertised that it had a restaurant, and we were looking forward to being clean, warm, and having a hot meal to help prepare us for tomorrow's 42 km walk. When we checked in we discovered the restaurant is actually closed, as are the other options in town.  Curiously it seems that most businesses are open Wed - Fri  only in this town. We haven't resupplied yet, so we will just have to be hungry for tonight. Sometimes things just don't work out the way you hope they will, but we are trying to remember the very many things we have to be grateful for - top among them being that we are warm, dry, safe, and have the company of a lovely cat for the night. 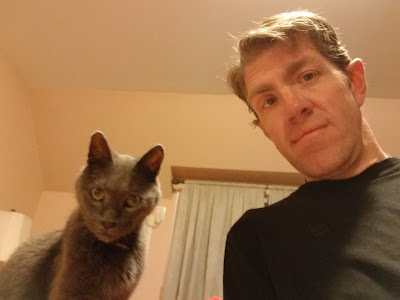