Yesterday brought 70 mm of rain and high winds, which continued well into last night. There were power outages across the city, and lots of leaves, twigs, and small branches were blown down in the storm. We were glad of our decision to sit out the storm, recover a little, and catch up on the blog.  At the moment, for a number of reasons, we are both continually tired and sore.

Although the rain stopped just before "dawn", it was still dark, overcast, and spitting gently when we set out into the suburbs of Saint John. At least it was a warm fall day. 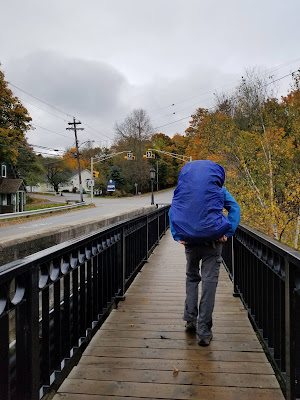 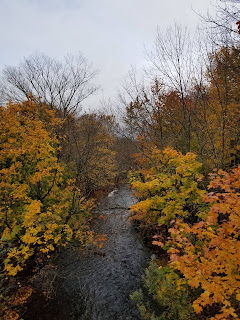 The first part of our walk took us through an affluent neighbourhood, down tree lined streets. There was a lot of traffic as people commuted to work and kids headed out to school. We were glad of the sidewalk!

Eventually the trail bought us to the shore of the Kennebecassis River. Even on this overcast morning the fall colours blanketing the rolling hills on the far shore were vibrant. A few Ring-billed Gulls played in the wind above the slate grey waters. A Double-crested Cormorant fished below. We could see summer camps, boat docks, and cottages across the lake, reminding us of the warmth and light of summertime. 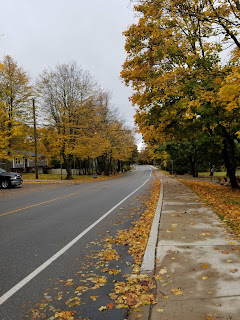 A high point of our walk along Rothesay Rd was when a man pulled over, got out of his car, and came to talk to us. He had heard our CBC interview and expressed his support for our goal of promoting the conservation of birds. It turned out he was a life long birder, and he shared yet another story of how he used to see many different species and individuals at his bird feeder, but now sees only a few species, and far fewer birds. He wondered what his daughter, and his grandchildren will see in the years to come. 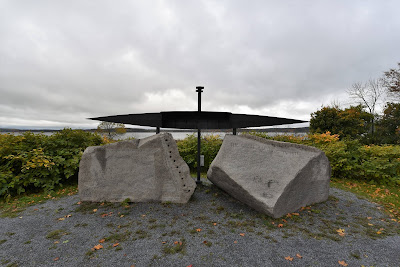 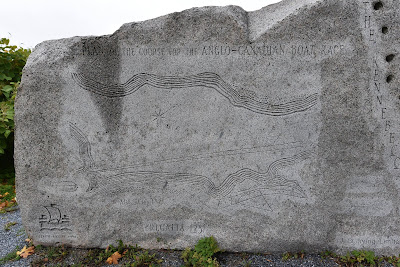 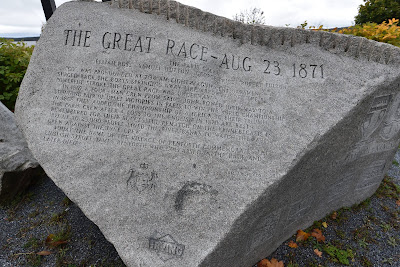 When the trail left the river we entered an industrial park. Approaching cities on foot is often unaesthetic. You walk through many kilometers of businesses that are meant to maintain cars or houses, offering products like auto glass, mufflers, trailers, furnaces, flooring, or boats. Our modern lives require these services, but you don't realize that there is often a 10 km donut of these types of places around cities. They offer few opportunities to stop or take bathroom breaks. 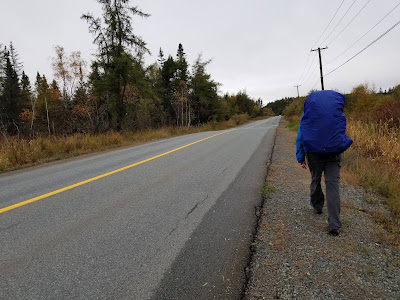 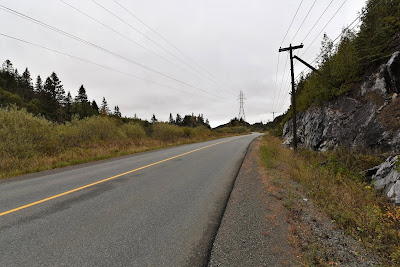 Just as we were beginning to mope and feel sorry for ourselves we ducked off the road and entered Rockwood Park. This large, forested area is one of Canada's largest urban parks, and it is considered one of St. John's hidden jems. 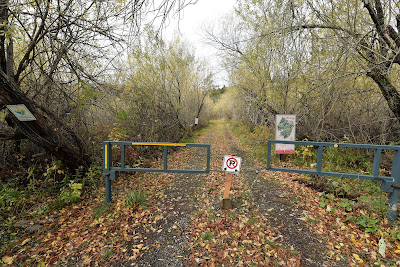 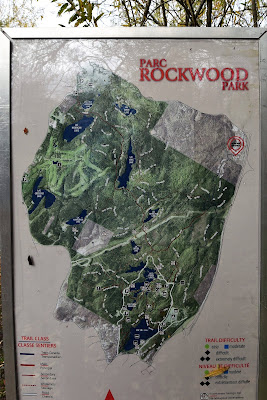 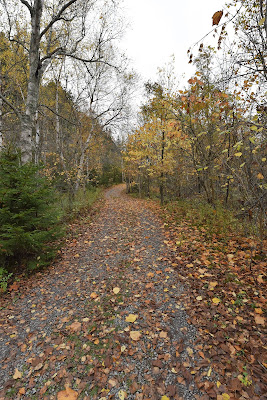 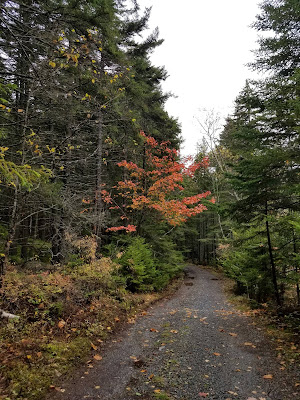 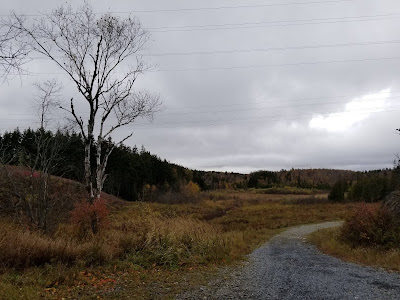 It offers fantastic opportunities for biking, hiking, bird watching, and geocaching along 50 km of trails, as well as camping, rock climbing, kayaking, canoeing, swimming, fishing, ice skating, and golfing. It is also part of the Stonehammer Geopark, so we could enjoy seeing some interesting geological features as we hiked. The trails were wide, well maintained and signed, with a crushed stone dust base, and they were a pleasure to walk! 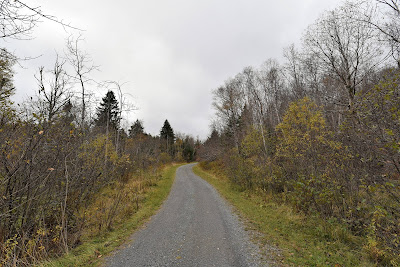 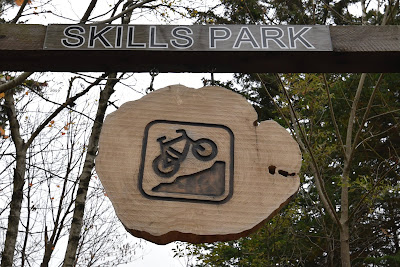 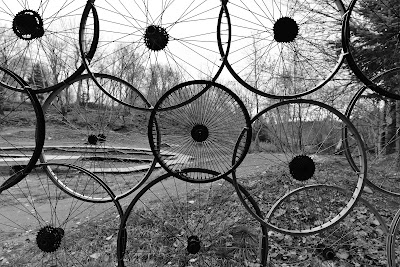 After skirting Lily Lake we walked past the Lily Lake Pavilion. This building has a long history, going back to the late 1800's. Lily Lake was used as a reservoir at one time, and later became a popular place for ice skating, among other things. In 1926 native speed skater Charles Gorman won the Speed Skating Championship on the lake, which is a point of great pride locally. 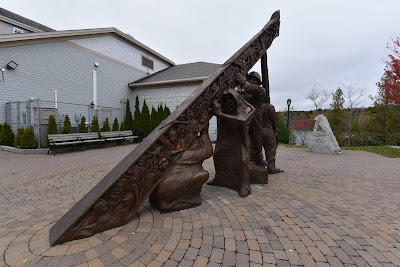 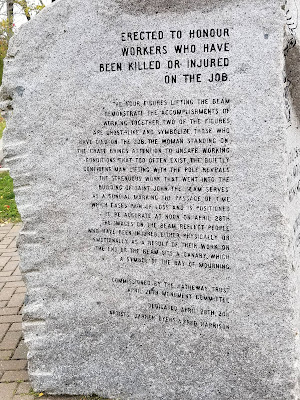 As we were examining the Frank and Ella Labour Exhibit out front of the Lily Lake Pavilion, and the Day of Mourning Monument, which honours workers who have died on the job, we were approached again. This time Les and Vickie very kindly offered to treat us to lunch at Lily's, the lakeside restaurant inside the pavilion. 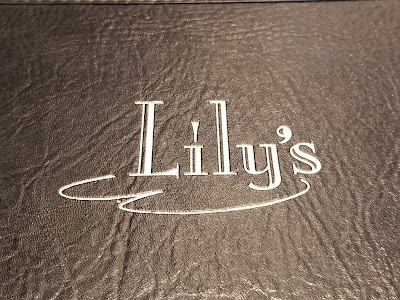 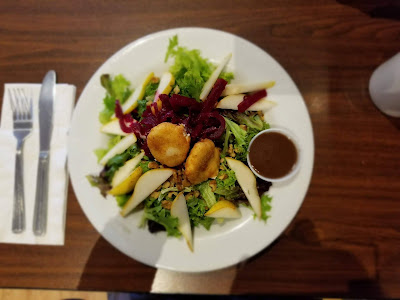 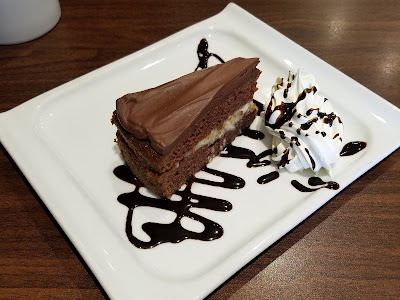 We enjoyed a fantastic lunch of beet and goat cheese salad with German chocolate cake for dessert! This classy, cozy, lakeside restaurant is located in the Lily Lake Pavilion, and it is operated by a registered charity, so 100% of the profits are returned to the community. Not only that, but the menu features fresh, local ingredients. Buying local produce is a great way to help birds, and Lily's offers the opportunity to dine while watching flocks of migratory ducks and Canada Geese out on the lake, and admiring the fall colours. We would like to send out a huge thank you to Les and Vickie for offering us this fantastic meal and experience! 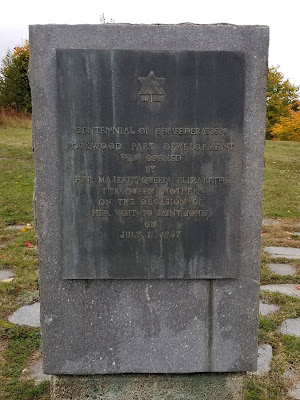 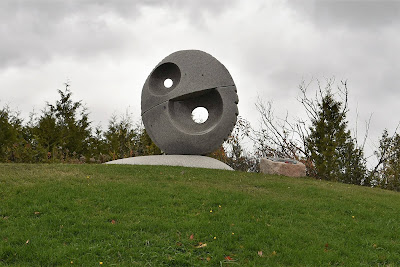 After leaving Rockwood Park the trail took us past downtown St. John, out along the harbourfront. We largely walked underneath the highway along a landscaped waterfront trail. There were various sculptures and artwork along the trail, and the designers had used the curves of the roads and ramps above to create an interesting space below. We also enjoyed a nice view of the city across to harbour. 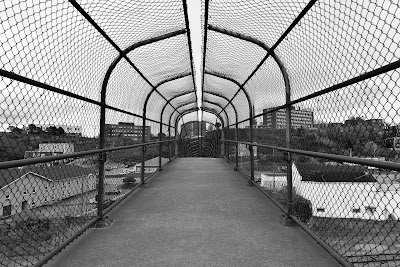 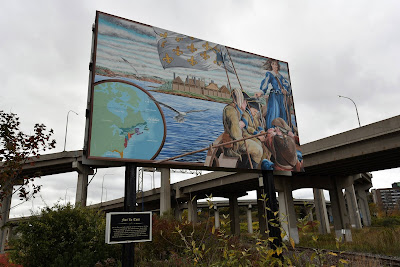 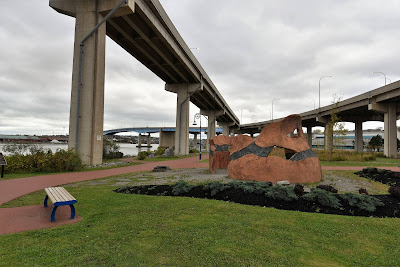 We dropped our bags off, and then continued along the trail. By the time we headed out again it was around 4:30 PM. After leaving the harbour, the Great Trail took us past the Reversing Falls, which is one of Saint John's tourist attractions and major landmarks. The Reversing Falls are located at a spot where the Saint John River goes over an underwater ridge, and meets the tides of the Bay of Fundy. 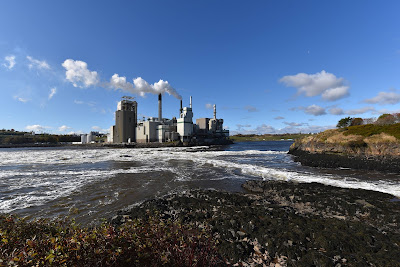 When the tide is low the river flows towards the ocean, through a series of tidal pools. When the tide comes in it stops the flow of the river, creating a period of stillness. As the tide continues to rise it reverses the flow of the river, creating rapids as it rushes upstream. Although this natural phenomenon is very impressive, we felt the romance of the location was somewhat diminished by the presence and strong stench of the Irving pulp and paper mill right at the falls.

While crossing the bridge over the rapids we were stunned to notice the number of signs and posted stickers encouraging people not to commit suicide and offering a listening voice if one was in need.  It was a stark reminder that it is often in places of natural beauty people come to end their lives.  We took perhaps 20 minutes crossing the bridge reading the various signs and postings offering help and were amazed at how heartfelt and caring so many people in the region are in striving to help those with mental health issues. 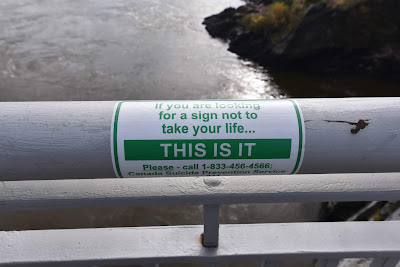 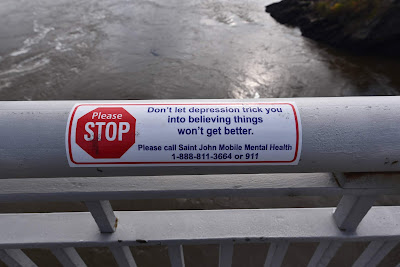 I would pass on their message, that the world is in fact beautiful, filled with marvels and possibilities.  If anyone ever feels the need to take extreme actions because of their circumstances then we would implore you to reach out to those in your families, or your community who are there to help.

By the time we passed the falls the light was beginning to fade. We still had another 21 km to hike to reach Grand Bay-Westfield. The last stretch we walked roads through a suburban area. Much of it we walked in the dark, with a cool stiff breeze against us and headlights in our faces. Perhaps it was a mistake to push through, because we were doing nothing more than making our miles. We weren't enjoying it, or connecting with nature, or seeing the communities. We were road walking through the suburbs to complete this section of the trail.

To take a step back and explain a bit, the Great Trail goes to Grand Bay-Westfield and then becomes a water trail for 100 km or so. It is possible to walk the highway through a military base beside the upcoming water section, but we were warned that the area is flooded from the recent storm, and we are advised that the highway is dangerous to trek along and that it is dangerous to stop or camp next the base who have fenced off much of the coming region to within feet of the roadway. So, after a great deal of deliberation we will be taking a bus around the water section, and picking up the trail again in Oromocto. The bus leaves from downtown St. John, and there is nowhere to camp or stay in Grand Bay-Westfield. So, we pushed through to finish this section of trail, and then returned to Saint John. As I write this at 1:00 AM, after walking a painful 38 km, I think we will spend tomorrow exploring Saint John, and then continue our #hike4birds the next day.