The Fundy Footpath is an approximately 41 km long trail that runs from Goose River on the western edge of Fundy National Park, New Brunswick to the Big Salmon River Interpretive Center about 20 km outside of St. Martins, New Brunswick, Canada. 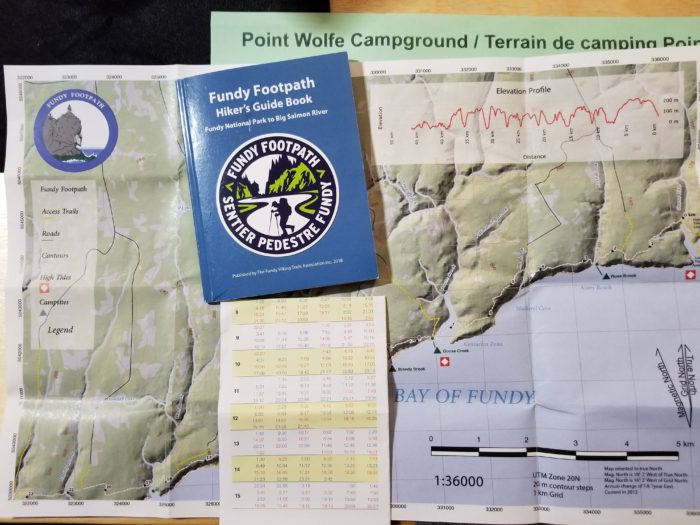 It has been rated as one of North America's and Canada's top hikes, and it is a serious undertaking. The trail takes hikers through the longest continuous section of coastal wilderness south of Quebec. It offers the chance to visit pristine beaches, stunning river deltas, towering cliffs that provide panoramic views of the Atlantic Ocean, majestic waterfalls, and magical, moss-covered forests.
Although it is only around 41 km long, most people take four days to complete it due to the ruggedness of the terrain. With repeated ascents and descents of 300 m (984 ft), this footpath has a total elevation gain of 3048 m (10,000 ft). 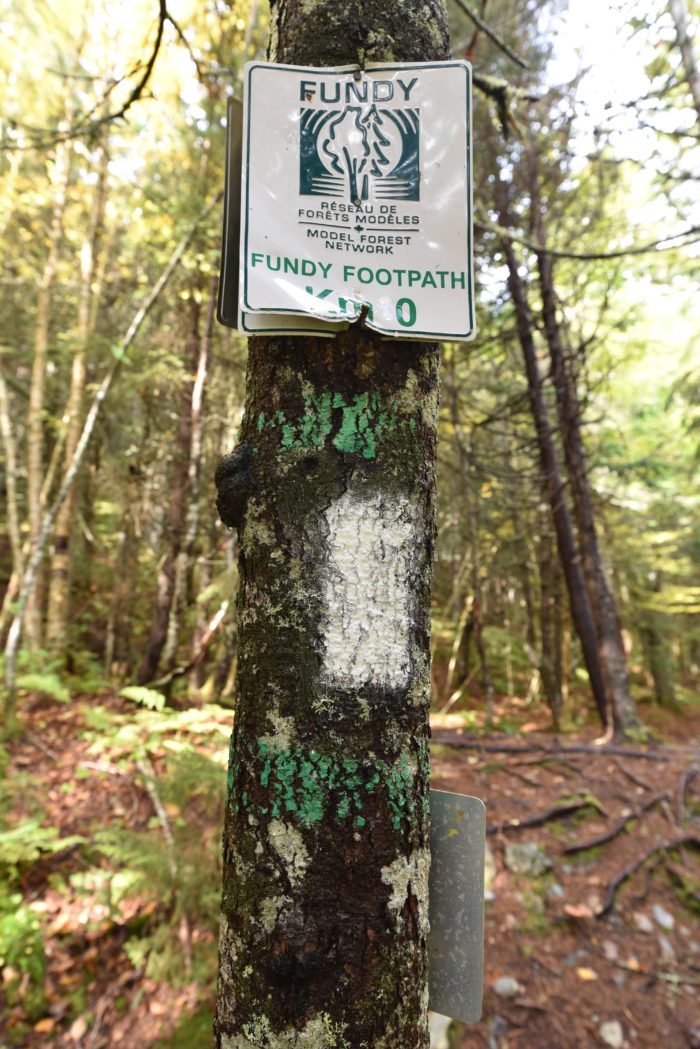 This trail is not for the faint of heart. The path wastes no time in taking hikers from sea level straight up to the highest point on every ridge, often making the steepest ascent/descent possible. The trail also prides itself on taking hikers along the extreme edges of cliffs on narrow, at times partially eroded, overhung, and sagging ledges. Ultra-light hikers, trail runners, and those who enjoy the adrenaline rush of a strenuous and challenging hike should find this trail a rewarding experience. 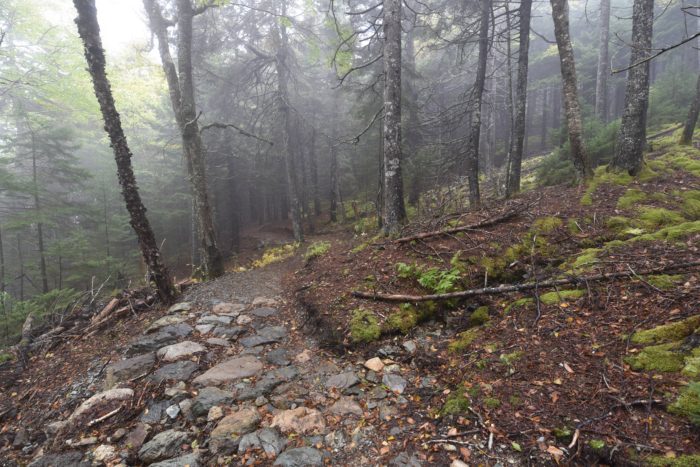 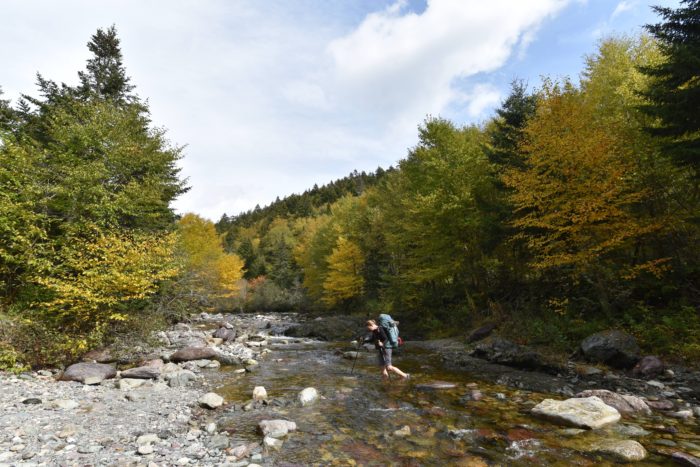 The Fundy Footpath mostly runs through a forested landscape, and it crosses may freshwater streams, brooks, and rivers. When we hiked it in October finding freshwater was no problem, although it was recommended that we filter, boil, or treat it.

There were established campsites with privies and bear-proof boxes for food every 10 km or so. There were also several primitive campsites along the way, as well as camping opportunities above the high tide mark on some of the beaches. The Bay of Fundy is home to the world's highest tides. It is important to know when high and low tide is, not only for safe camping, but also because there are four river crossings that can only be made at low tide. 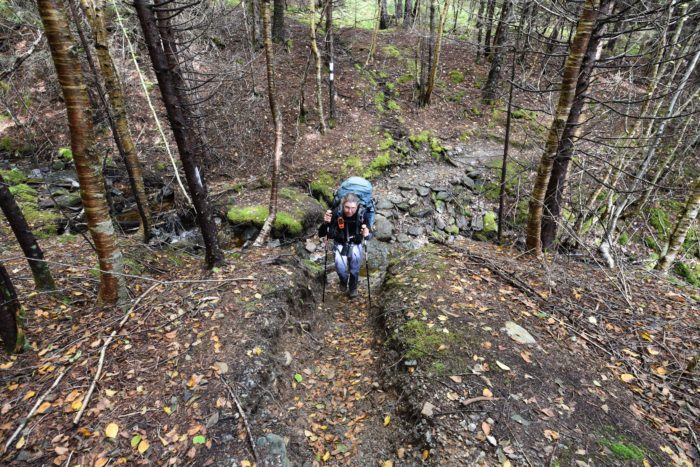 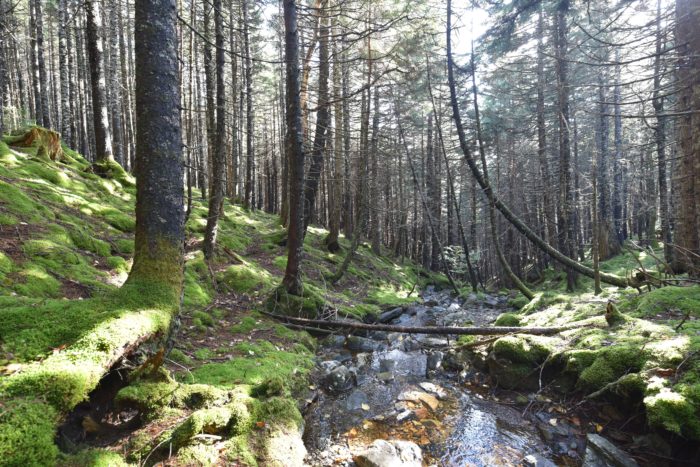 The footpath itself is marked with white blazes, partially following the tradition of the Appalachian Trail. One blaze indicates the path continues straight ahead, whereas two blazes indicate a turn. Unlike the Appalachian trail, the double blazes are stacked directly on top of each other, so they don't provide any clues as to which direction to turn. Generally the blazes were relatively easy to follow, but in the alder stands faded blazes blended in with the patches of lichen, and on the extremely steep ascents the next blaze was sometimes about 20 ft above us, making it difficult to see. 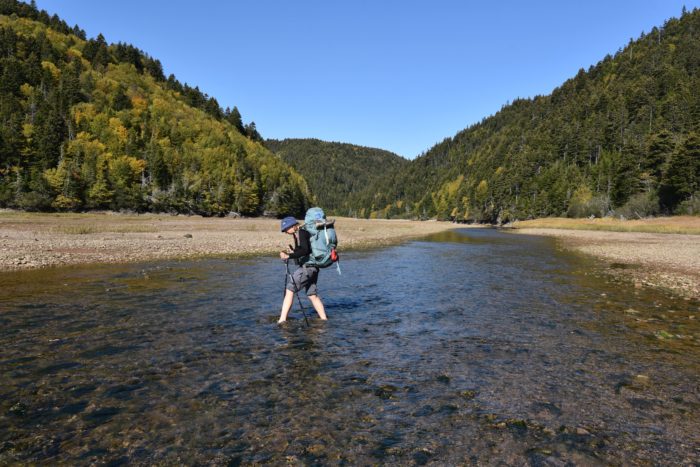 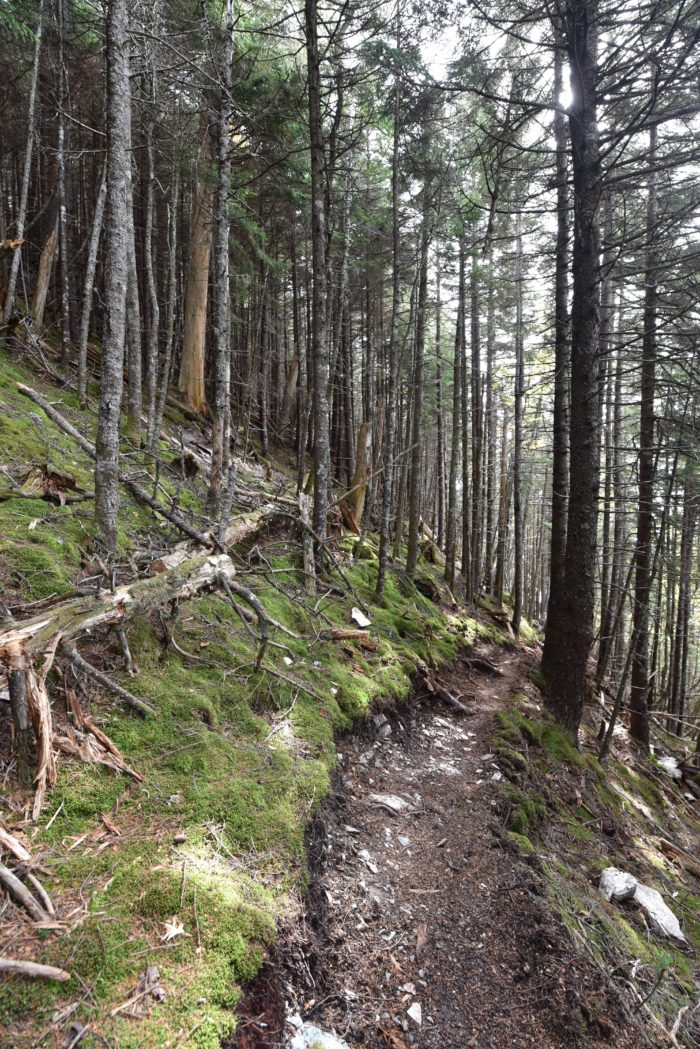 There is a paper guide and map available for the Fundy Footpath, but in our opinion these resources could use some updating. Distance was measured as surface distance east of Little Salmon River, but as flat distance west of it, and it was reset to zero at Little Salmon River in the trail guide. The elevation chart on the map is unlabelled, begins at Point Wolfe Campground (not the zero kilometer marker of the Fundy Footpath), and it appears to end 10 km shy of the western terminus. There are two reroutes that add 2-3 km of trail that are not included in the distances or elevation chart yet. Finally, the guide describes the 10 km at the western end of the trail as a relatively flat, gravel track with minor ups and downs. It is a rocky, bolder strewn, rooty footpath that makes almost continual ascents and descents. It is tiring and time consuming to cover, especially if you have already completed 2 or more of the larger ascents/descents on the same day. 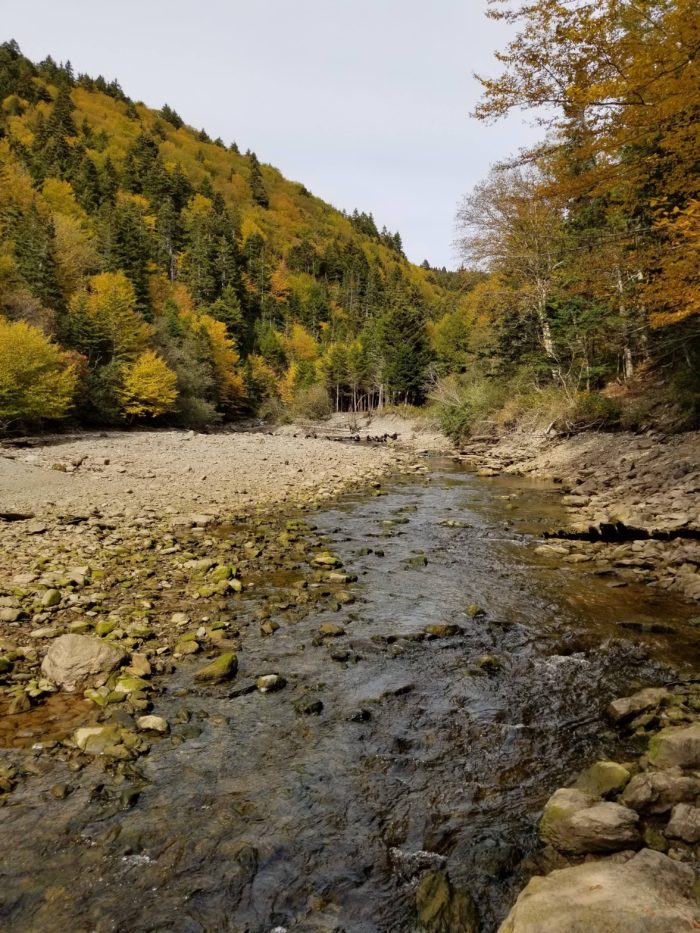 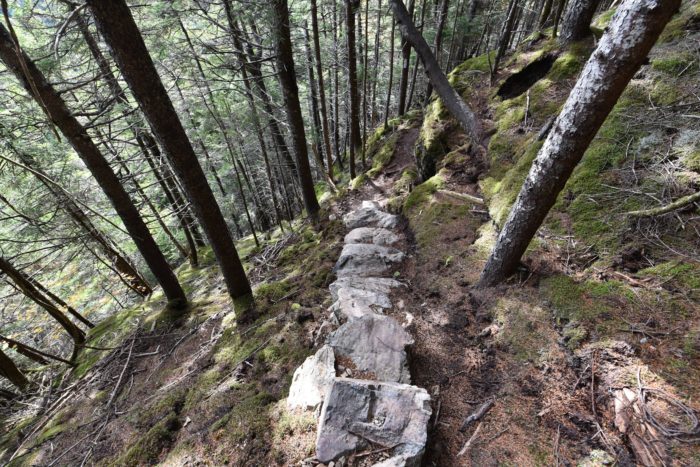 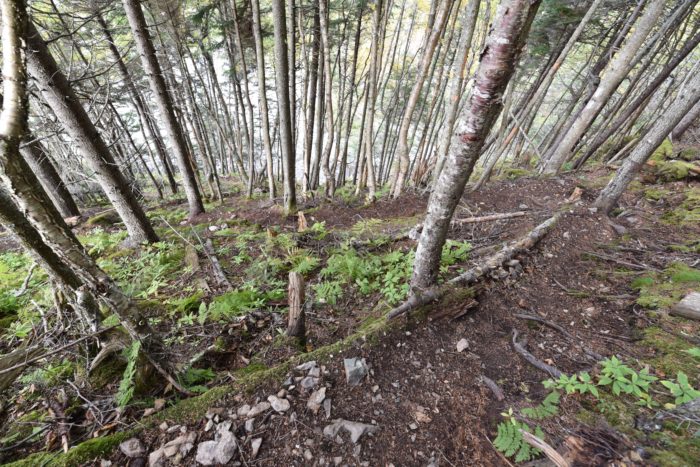 We ended up using a combination of the All Tails App for the elevation chart (make sure to download the map for offline use before starting, as cell service is patchy), the Great Trail App to measure distances (only works when cell service is available), and the printed map/guide for the locations of the campsites and tidal river crossings. 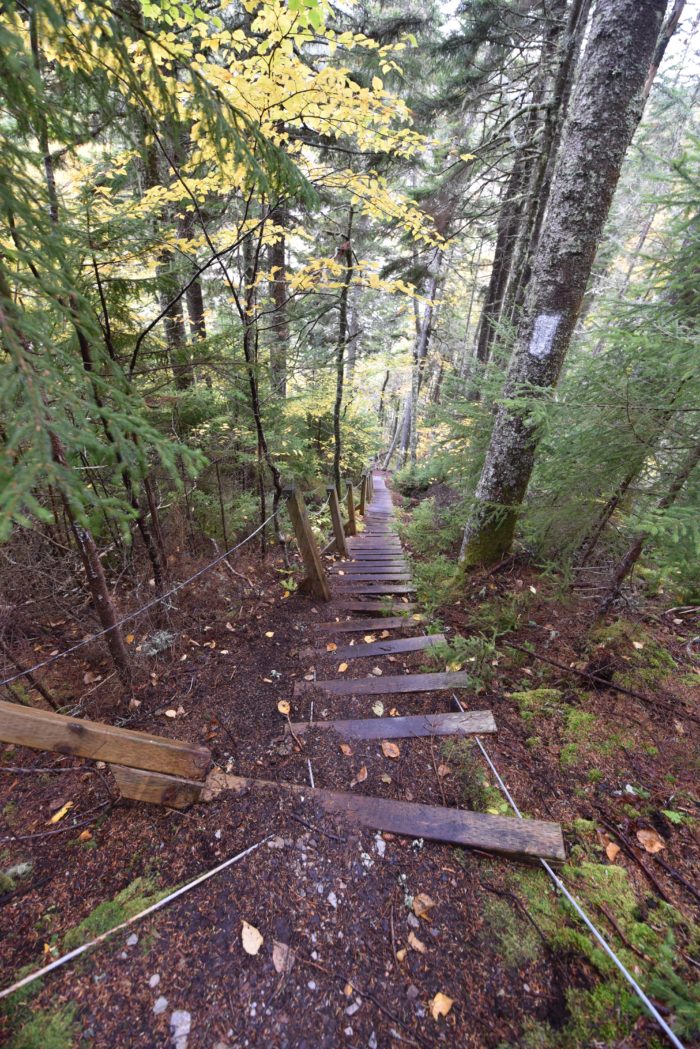 On our first day we hiked from Point Wolfe Campground in Fundy National Park to the Primrose Campsite, about 1.7 km into the Fundy Footpath. The first 11 km were along the new Goose River trail in the National Park. Although there were a lot of small ups and downs designed to make this trail interesting for mountain bikes, it was essentially a wide, crushed stone dust trail that was relatively easy to navigate. It wound through beautiful coniferous forest, crossed several small streams, and took us past a few small waterfalls. 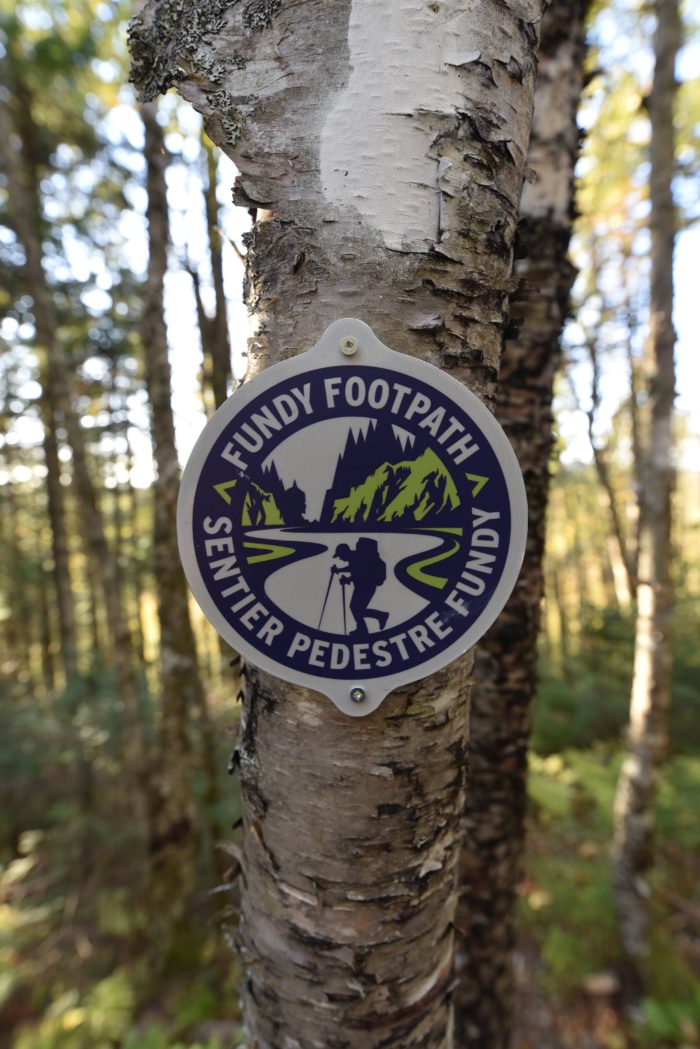 When we reached Goose River there was another 1.7 km of trail that took us around the first tidal river crossing. This connector was essentially an extension of the Goose River trail. We then waded across Goose River, and began a very steep ascent up to Primrose. We could easily have made it to the Rose Brook Campsite, which is located at Azors Beach, but we liked the magical, mossy glade and decided to stop since we had to wait until late afternoon for low tide to cross Goose Creek the next day anyway. 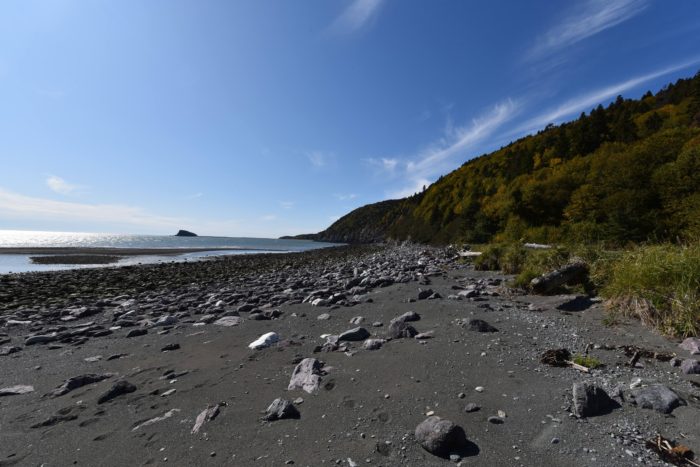 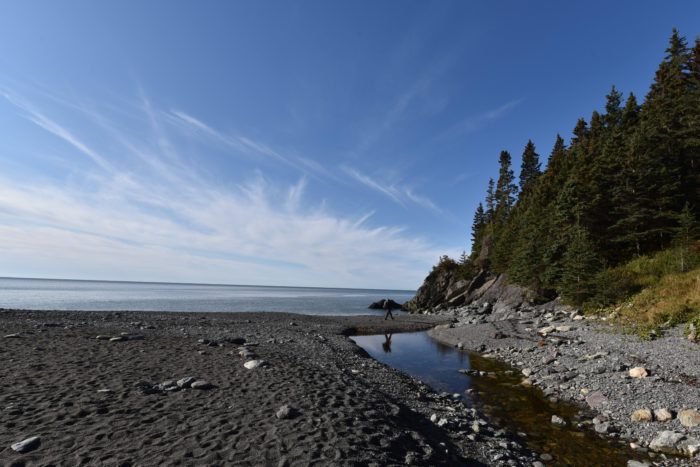 On our second day we hiked from Primrose Campsite to the Quiddy River Campsite, covering 11 km. We forded two rivers, climbed many steep switchbacked hills, visited pristine beaches, and walked through enchanted forests. Our legs protested, but the beauty of this wild, remote, and rugged landscape was stunning. 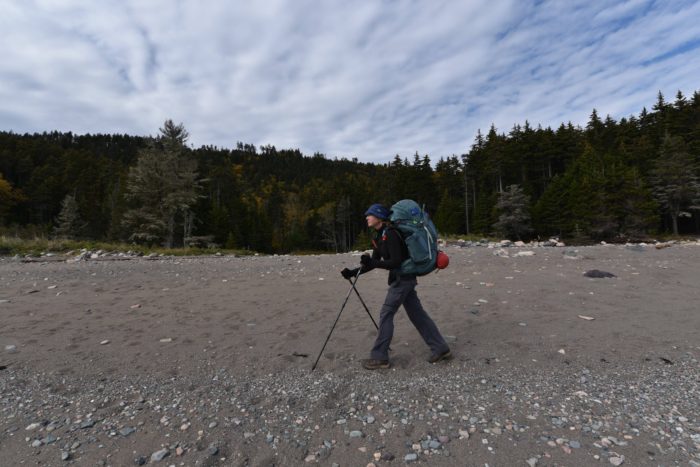 Our third day we hiked from Quiddy River to Little Salmon River. One of the highlights was visiting the beach at Telegraph Brook, which had some beautiful and interesting geology. Another treat was enjoying the newly maintained switchbacks at Wolfe Brook! The ascent and descent were enjoyable to navigate thanks to all the hard work of the trail crews. A huge thank you to them! After that we entered a section of rerouted trail which I think was designed with mountain goats in mind! We ended the day with the longest descent on this trail - over 300 m straight down into Little Salmon River. It was a very long day, filled with both challenges and great beauty! 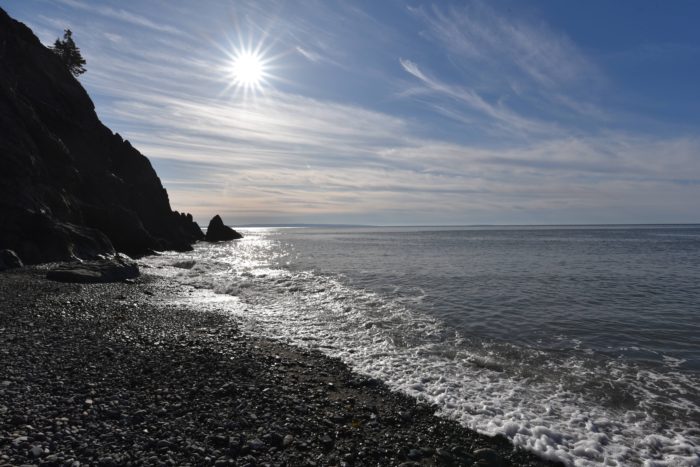 Our final day we hiked from Little Salmon River to Big Salmon River. It felt like there was a change in pace. The switchbacks were replaced with cable assisted ladders that went straight up the hills, and in between the path was a little bit wider and easier to navigate. Another tough but beautiful day on the trail! 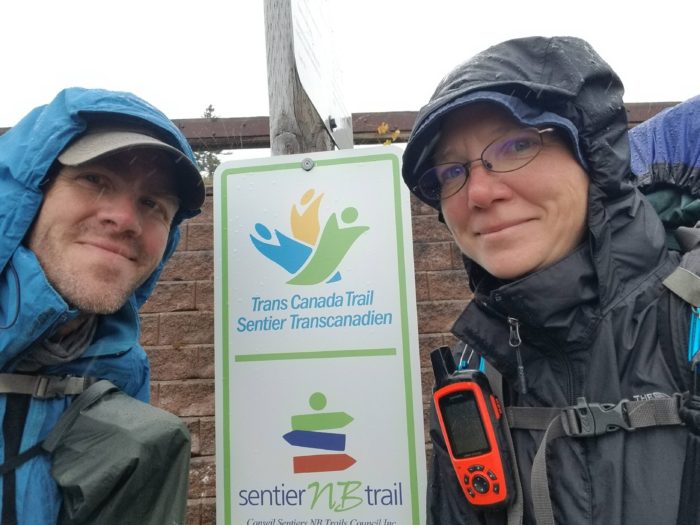 One thing to note for thru-hikers is that the trail ends at the Interpretation Center, but this is still 19 km outside of the town of St. Martins, and you are not supposed to camp in the first 10 km of that stretch. All told, there are 83 km between the town of Alma in the east, and the town of St. Martins in the west, which are the closest resupply points for thru-hikers. For people entering the Fundy Footpath at Point Wolfe Campground, Fundy National Park and exiting at the Salmon River Interpretation Center, there are 53 km of trail between the parking lots. 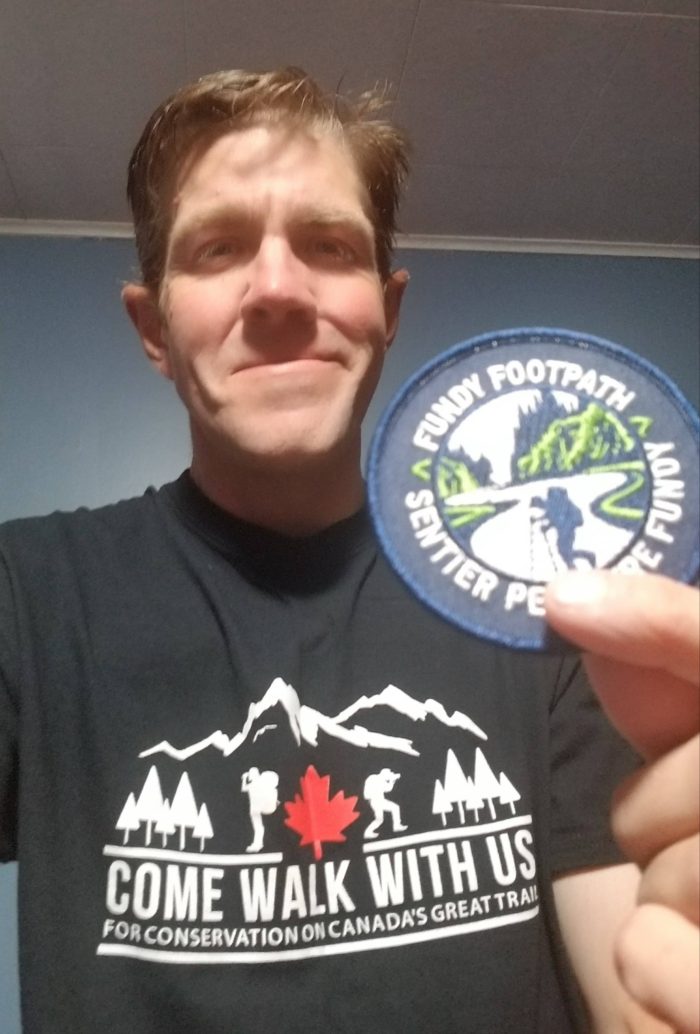