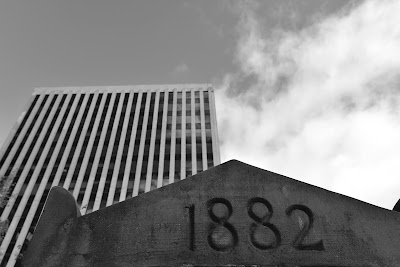 We began by walking the waterfront outside Market Square. The waterfront features two small replica lighthouses, a large bronze statue of a Canada's favourite mammal: the moose, the Hooper Clock, and a row of restaurants with outdoor patios that must come alive on warm summer evenings. 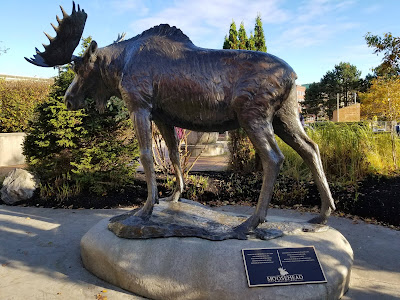 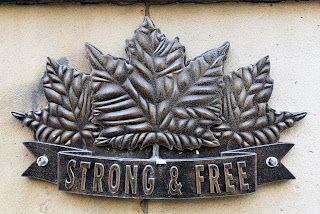 As we headed up the hill through Uptown Saint John we were impressed with the number art galleries, as well as street art around the town. Part of this artistic expression was featured in an art installation called Salmon Run, which consisted of 21 brightly coloured salmon located around town. Each fish was decorated by a different artist. 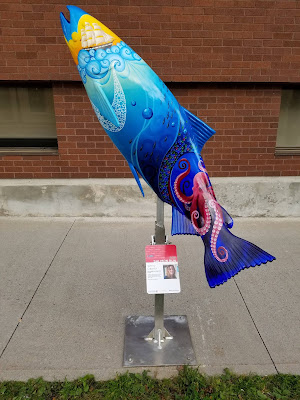 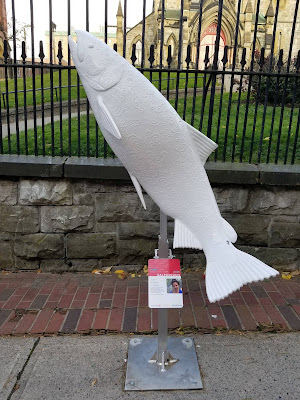 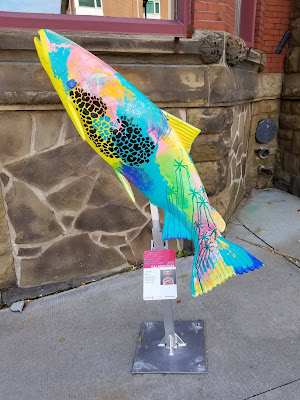 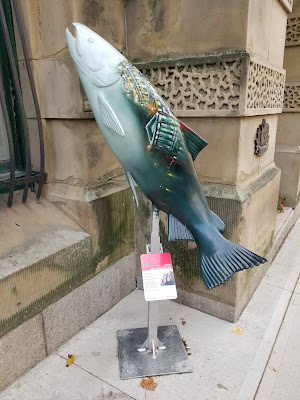 Eventually we came to the Loyalist House, which is a strong reminder of the Loyalist heritage of Saint John. This Georgian Mansion is one of the few buildings to survive the Great Fire of 1877. It was built in 1817 for the family of David Daniel Meritt, an American Loyalist who came from New York to escape repercussion for his loyalty to the British crown, and it remained in the Merritt family for six generations. 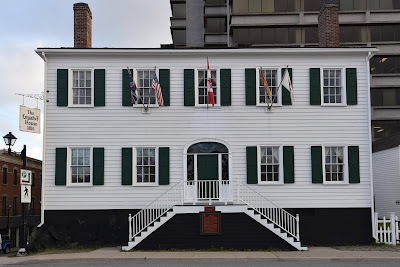 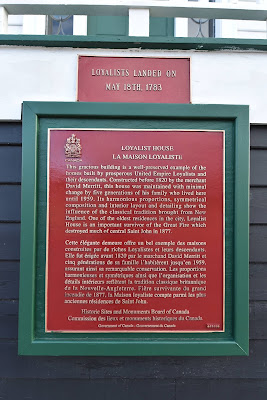 As we continued our wanderings we discovered the Three Sisters Lamp, another iconic landmark of Saint John. Historically, these three red gas lamps were visible from three miles out at sea, and when sea captains lined them up visually with the steeple to the Holy Trinity Church they were afforded safe passage into the Saint John Harbour. No one is sure exactly how The Three Sisters acquired their name. 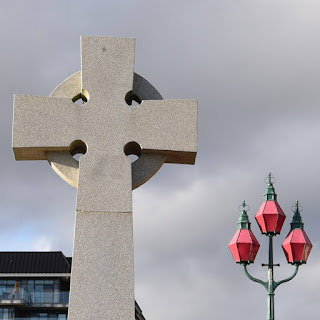 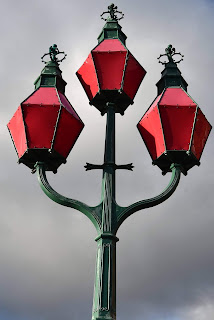 From this vantage point we could see Partridge Island, which served as a quarantine location for millions of early 19th century European immigrants seeking a life in the New World. This facility predates the better-known Ellis Isle off New York by nearly a century.

Established by the Saint John Royal Charter of 1785, the island began as a military outpost and navigational aid station for sailors and traders. During the Napoleonic Wars it was used as a quarantine station for immigrants, and the during the potato famine of the 1840s so many Irish immigrants passed through that the island was nicknamed the "Emerald Isle." I had no idea that New Brunswick had it's own version of Ellis Isle. 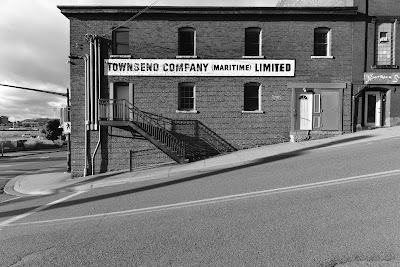 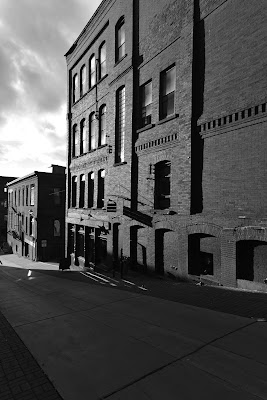 In the afternoon we wandered back through the brown brick city, stopping for a delicious fresh falafel at the colourful Saint John City Market. This is a National Historic Site, being the oldest farmer's market in Canada that is still operational. 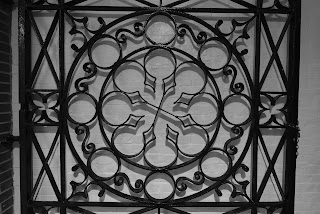 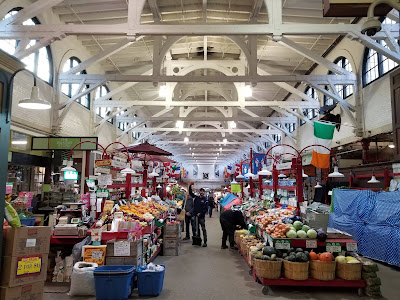 Afterwards we paid a visit to the New Brunswick Museum, located near Market Square. This museum offers an exhibit on New Brunswick's history, explaining its lumbering, military, and ship building heritage. It also has a interesting geological exhibit which illustrates the world's evolution through rock samples and examples of the fossil record. 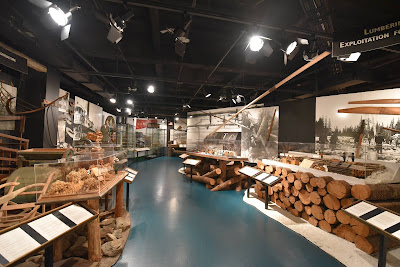 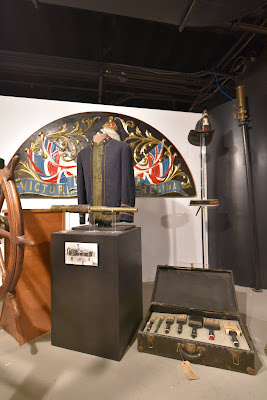 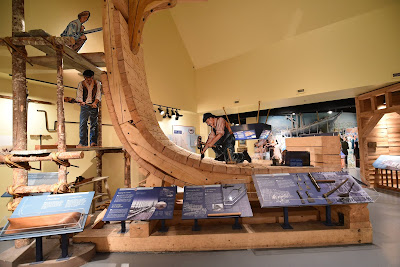 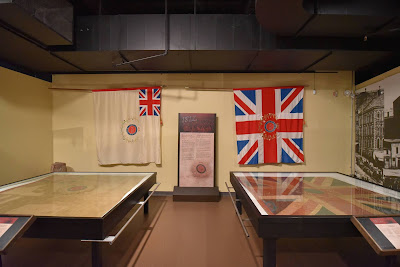 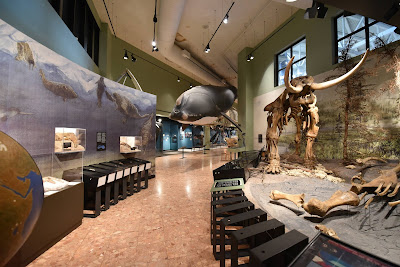 We had fun exploring the exhibits on space travel, hair, and whale anatomy, and looking at the photography of Thaddeus Holownia. 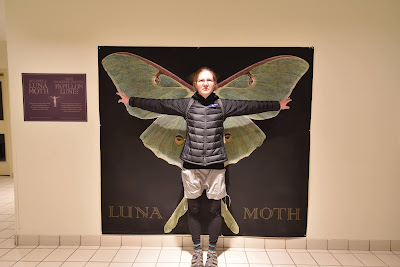 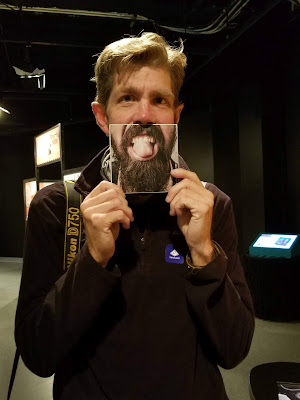 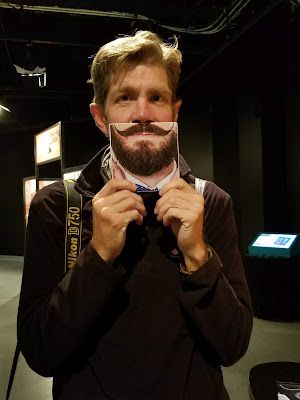 Of course, the highlight was an entire room featuring the birds of New Brunswick! This display featured 116 stuffed birds, representing the 370 bird species that have been reported in the province. We were surprised and pleased to find so much of the museum dedicated to natural history, and birds in particular. 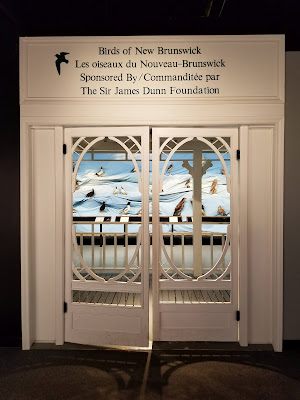 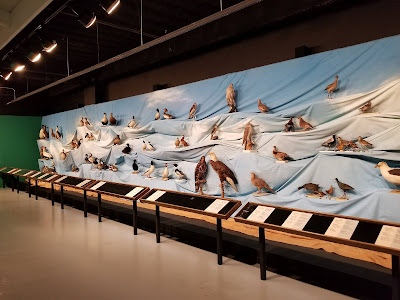 One of the places we had hoped to visit while in Saint John was the Irving Nature Park. This 243 hectare (600 acre) park encompasses six different ecosystems, and allows visitors to see and learn about forest, salt marsh, and beach habitats. It has eight different trails and boardwalks, as well as a lookout tower and an observation platform for viewing birds in the salt marsh. It is free to visit, and a great place to go birding, with over 197 species having been reported on eBird. Sadly, when we arrived in Saint John, according to the tourism office it was closed due to the number of trees downed in the storm. When it reopened in the afternoon the wind was still very strong and rather cold, making the weather unfavourable for seeing birds. 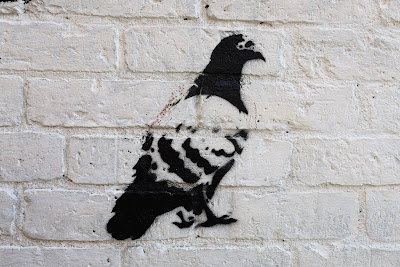 It was a long day of exploring, and when we stopped for a bite to eat we had intended to make it an early night in preparation for another long hike tomorrow. However, we were happy to discover there was live music! The band was very talented, and played songs from our university days - Tom Petty, Sting, and Van Morrison among others. We ended up spending an enjoyable evening, and staying up far past out bedtimes.