Hiking for a Cause and What that Means: Logo Design

The latest in our series of postings on what hiking for a cause does to your trail preparations.

In recent weeks we have had a few questions about our logo design, and so we thought we would share the process of designing a campaign logo, as well as how and why we set out our design.

In October of 2018 (a lifetime ago now) we settled on the final draft of our campaign logo.  By the time we had drafted, agreed upon, completed, and then printed our logo, we had spent several months considering our options and drying different ideas, images, and designs.  The process was, to say the least exhausting…..

Think of logos you know, not just the ones you are familiar with, but the ones you instinctively and immediately recognize.  The golden arches of McDonalds, Starbucks, Apple Computers, Amazon, Nike, Target, IBM, Penguin Books, Lego, BMW, John Deer,  Air Canada, Canada Post, World Wild Life Fund, Amnesty International…even digital organizations such as...Instagram, Twitter, Android, Facebook – where in each case the logo has become culturally iconic.  Each of these companies’ logos or decals evokes a sense of their product, their quality, and their ideals.  In fact, in each of these examples, the logos have been so well designed and popularized, that they no longer even require that the name of the store or brand to be included for them to be known.

So having reviewed popular logos and their designs, we considered what the over arching goal of a corporate or campaign logo should include.  From our research it seems that the best logos must:

(1)    Be simple, attractive, and memorable, or inversely not too busy or complex.

(2)    Be balanced in term of shapes, imagery, design, and colours.

(3)    Rely on the image more than text and typography – or incorporate the text if possible.

(4)    Reflect the mission, ideals and goals of the endeavor.

(5)    Make the organization and campaign look professional and organized.

(6)    Make the campaign have a recognizable and distinct and distinct image – in person and on social media.  Is it easy to remember?  Is it re-tweetable?  Is it distinct or are the elements overused by other similar brands?

(7)    Utilize colours and design effectively, after all there are conscious and subconscious cues which colours have on the mind.  Such logos also need to be designed to account for how a colour logo would look after being reproduced in black and white.  Does the design still work in this instance?

(8)    Stand out on different colour backgrounds for differing websites, T-Shirts, decals and products.

(9)    Be immediately recognizable and foster a connection between an undertaking and those who follow it.

(10)Finally, reflect the undertaking we were about to embark out on!  In other words it had to include Hiking and the Outdoors!

As you can imagine, it is extremely hard to achieve all of this in one design.  In fact after the first month of reworking and reimaging I soon had the greatest respect for graphic designers and what they do everyday.

Perhaps our greatest challenge came in that neither of us is really a designer or artist.  While, admittedly I do have an artistic background from my time at the Toronto Waldorf School and Sean has spent a great deal of time as a professional photographer neither of those experiences really helped us much for this challenge.  In addition to our general lack of skill we also both naturally had different interests and ideas.

Overall however the central problem in designing the logo was how to highlight the hike, our message and  have it reflect both of our interests – birding on one hand, and photography on the other – amid a trek which would cross the entirety of Canada?  Beyond these issues we had to decide what iconic Canadian elements should we include?  How could we represent the trail?  How could we to highlight our birding? Nature? Exploration?  … in short it was a lot to include, and ultimately some of these things just never found their way into the final design.

Some of our early drafts and debates tried to include birds, binoculars, hiking poles, the mountains of British Columbia, the grasslands of the Prairies, the Boreal forest of Ontario and Quebec, and the lighthouses of the East Coast.  We debated whether the Trans Canada Logo or the Great Trail icon should be incorporated.  We considered whether the path itself should be overlaid onto the design. Ultimately however, a lot of our ideas went by the wayside as either not workable or not appealing – and with them so too did many of the concerns about what should or could be included in the design. 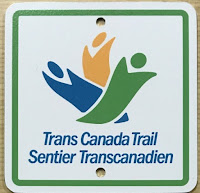 Soon we settled on a list of things we definitely wanted on the logo.  First and foremost we began with the notion that the Canadian Maple Leaf – a bright beautiful red maple leaf - had to be front and centre – that was a must!  Then we decided that we had to represent the scope of Canada’s wilderness.  Finally we agreed that each of our interests must be reflected – hence the silhouettes of the two hikers – one with binoculars, and one with a camera.

As we got closer to our final decision, we simplified each aspect of the design further by removing some of the details, and colours – except for the red Maple Leaf.  In the end we went with the classical contrast between the black, white, and red colours and included our name – Come Walk With Us – and our web address : www.comewalkwithus.online . 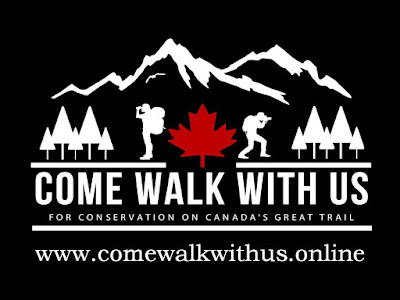 Ultimately, the entire process – like almost every step of our planning and preparations – took far longer than we anticipated.  This meant delays in announcing our design, delays in getting it to the shirt printer, and patch maker and ultimately a huge delay in launching our website.

In the end however, we are very excited by the final design for the first year of our trek!

See you on the trail…