'Come Walk With Us' Over the Winter Months

Since leaving the Great Trail last November, 'Come Walk With Us' has been keeping busy.  When we stepped off the trail we paid a surprise visit to family in BC, before beginning a house-sitting gig in London, Ontario for the winter.  I was extremely lucky to resume full-time work as a GIS analyst at Birds Canada a few days after returning to southwestern Ontario.  Although at that point I felt like a few weeks R&R would have been nice, the renewed cash flow was necessary and much appreciated.  In addition to the full time job, Sean and I have both been working hard editing images from 2019 and on preparing for our second season on the Great Trail. 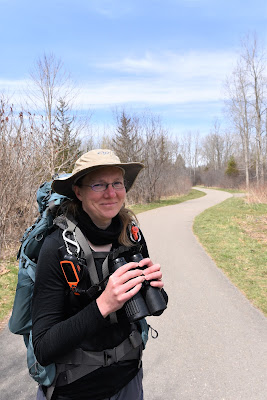 Re-entry into 'normal' life took some getting used to.  Indoor heating and the sound of appliances constantly running were unfamiliar.  Indeed it took some time to get used to living and sleeping indoors again.  The need to remember keys, and to think about what we might need while 'out' also took some getting used to again.  Turns out, some things are easier when everything you have is on your back.  The number of options for food, clothing, and entertainment were also a little overwhelming at first, and lead us to wonder why we have so much stuff.  Without a car we only had to partially adjust to the pace of mechanized life again, but re-immersion in the world of doing statistics, analysis, mapping and computer work full time was perhaps the biggest challenge of all.  However, our months off the trail did give our bodies a chance to rest and recuperate a little, and gave us time to prepare for our next season on the trail.

At the end of February we gave two talks on 'Exploring Canada from the Great Trail' at the Toronto Outdoor Adventure Show.  A week later we gave two presentations at the Vancouver Outdoor Adventure Show.  We were thrilled to meet and hear the stories of several people who have been following our hike from the beginning, and we were humbled to learn that in both cities some of our readers had travelled quite some distance to hear our presentation. 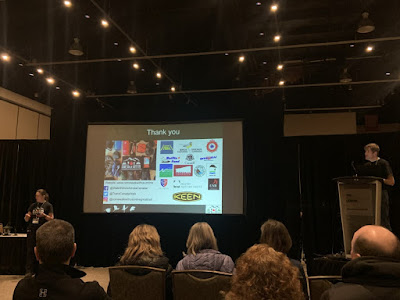 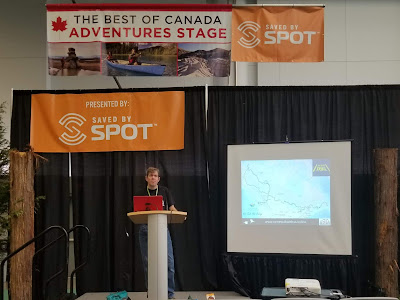 While staying in Vancouver for the OAS we had a chance to do some birding in Stanley Park, which is located in the English Bay, Burrard Inlet & Howe Sound IBA.  We walked along the seawall, through some of the majestic West coast rainforest in the interior, and around the Lost Lagoon.   We'd left Ontario in a blizzard, so we particularly enjoyed the array spring wildflowers that were blooming throughout the park.  We were also excited to see large flocks of Wood Ducks hanging out at the Lost Lagoon and several other junctures within the park.  In one area they were behaving like Mallards, being fed by people!  We'd never been so close to so many of these brightly coloured ducks, and we were particularly impressed with the iridescent colours of the females. 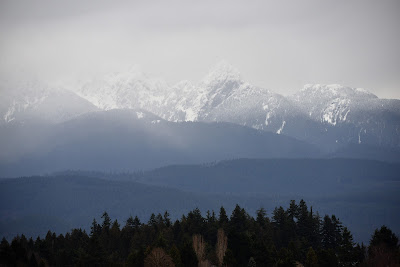 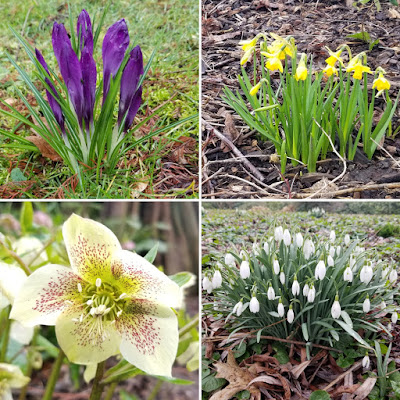 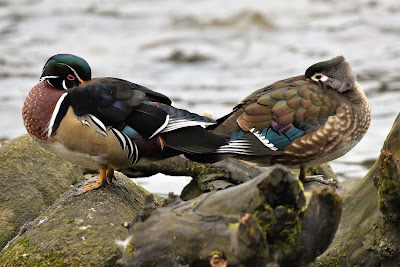 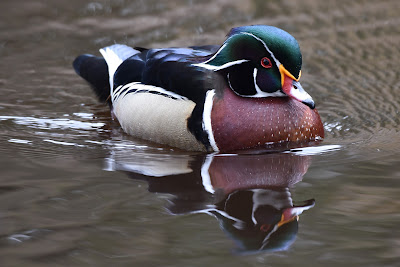 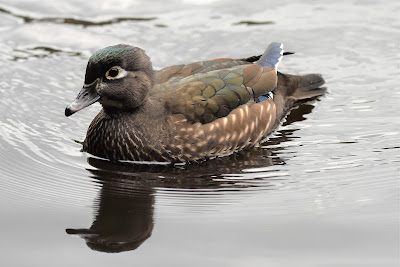 On our walks we also got a close up view of a Great Blue Heron, quite a few Common Mergansers, Hooded Mergansers, American Coots, Barrow's Goldeneyes, Spotted Towhees and loads of Song Sparrows, to name just a few of the many birds we enjoyed. 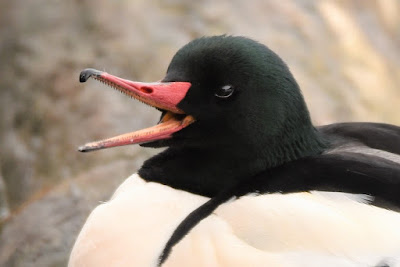 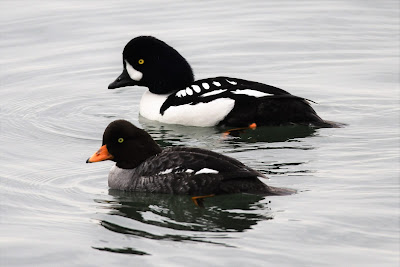 During the first week of March we gave a whopping five presentations at five Fraser Valley Regional Libraries, with the support of the fantastic staff at the BC office of Birds Canada and FVRL.  During a whirlwind five days we were able to reach out to members of the public in Tsawwassen, Pitt Meadows, Port Coquitlam, Abbotsford, and White Rock, encouraging them to reconnect with nature through birding and Citizen Science.  During our library talks we were thrilled to promote 'birding backpacks' that are being offered by the FVRL.  These backpacks include good quality binoculars, which the FVRL staff will help patrons learn to use before they head out, a bird identification guide, and some basic information on how to record and submit your observations of birds.  The packs can be signed out of the library like a book, and the program has been so popular with kids and beginner birders that there is a waiting list! This was a fantastic opportunity for us, and it was great to once again meet long-term followers (thanks Ralph for a lovely evening at the pub!), as well as new birders. 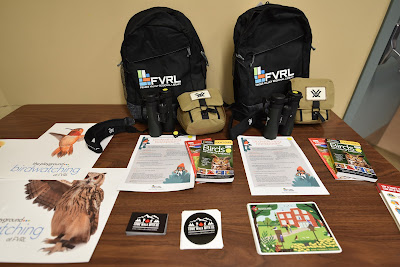 Many of the talks we gave in the Greater Vancouver Area were in communities that fell within, or were very close to the Fraser River Estuary Important Bird Area, and we were thrilled to be able to do some birding in this IBA as well.  The Fraser River Estuary is a large complex of interconnected marine, estuarine, freshwater, and agricultural habitats that together form one of the richest and most important ecosystems for migrating and wintering water birds in Canada. It is a major stopover for birds on the Pacific Flyway, hosting up to 5 million migrating birds from 20 countries and 3 continents each spring and fall. 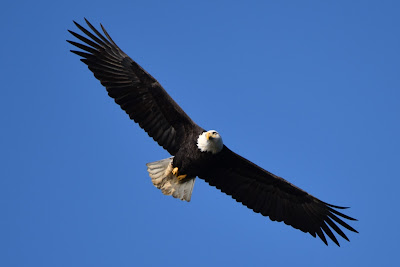 During our talks we also had a chance to meet up with members of the Burke Mountain Naturalists club, who generously gave us a fascinating tour of the Blakeburn Lagoons Park in Port Coquitlam.  In the 1920's the site was a cattle ranch, and later it was an industrial settlement pond, but today it has been rehabilitated into a well designed ecological park.  Over 137 species of birds have been observed in the 11 ha park, and it boasts many features to support bats, insects, and other wildlife.  During our short hike we saw a Cooper's Hawk that seemed to be showing off for us, a Bald Eagle, a mixed flock of Canada and Cackling Geese, Mallards, Northern Shovelers, Buffleheads, Pied-billed Grebes, Green-winged Teals, a Redhead, and several Anna's Hummingbirds. One of the most interesting things was watching the interactions between the American Wigeons and American Coots.  Coots are highly accomplished diving ducks, capable of feeding on aquatic vegetation from the bottom of ponds.  American Wigeons are dabbling ducks that also feed on aquatic vegetation, but are unable to dive.  Each American Coot on the lagoon was being pursued by 1-2 American Wigeons, and each time the Coot would dive and then re-emerge, a Wigeon would try to steal its food! 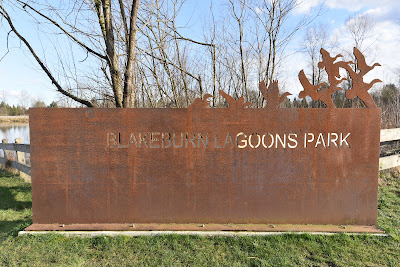 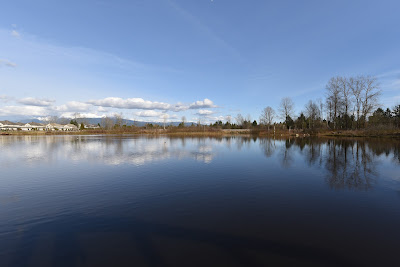 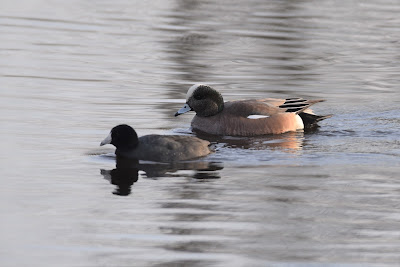 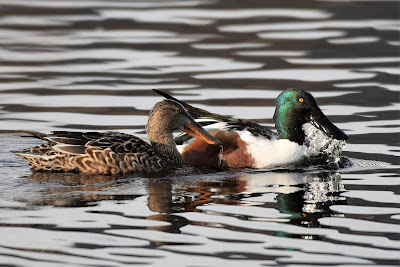 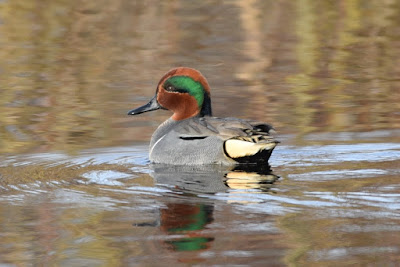 Another highlight was visiting the 'Longest Pier in Canada' in White Rock.  This 500 m long pier was full of people out enjoying the sunny morning, and it provided a great opportunity to watch and photograph a flock of Surf Scoters.  We could see them dive to the sandy bottom of the ocean, the males turning the black soles of their red feet to the sky as they dove.  We were particularly impressed with their evasive manoeuvres, which involved suddenly sinking straight downwards when approached by a Herring Gull intent on stealing their food. 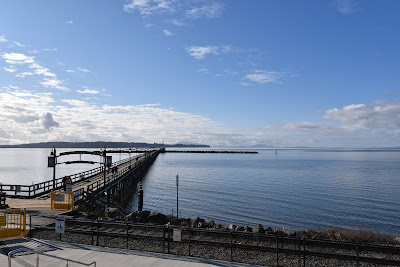 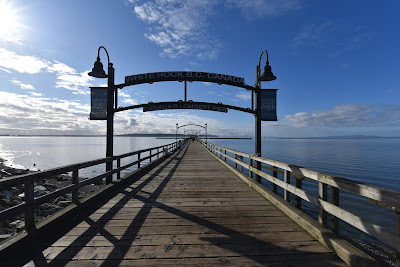 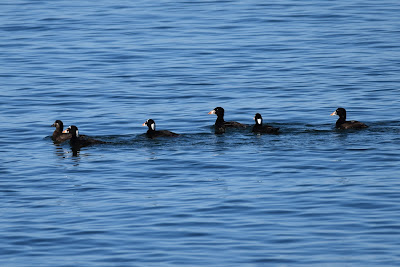 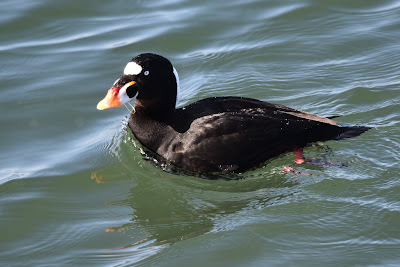 A few days after we returned from British Columbia, the world became a different place as social distancing came into effect, and we all entered lockdown in an unprecedented effort to stop the global spread of the novel corona virus, COVID 19.  Along with the 'stay at home' orders came the cancellation of events and gatherings all over the world. We had six talks scheduled for March and April, including at the Explorer's Club of Canada, Google's Canadian HQ, a Brownie Troop, a Scout Troop and several naturalists clubs throughout the province.  Although some of our talks have been postponed for the foreseeable future, we were able to adapt and offer online content fairly quickly.  As a result, we had the privilege of doing a YouTube presentation hosted by Exploring by the Seat of Your Pants for The Explorer's Club of Canada, and online presentations for Nature Vancouver and Ontario Nature.  In the coming two weeks we have six more talks scheduled.  We've also been working on developing video editing skills by creating two short videos on Connecting to Nature Thru Citizen Science and Connecting to Nature Thru Feeder Birds. 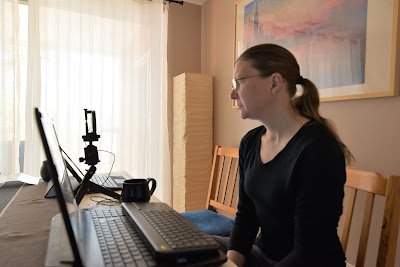 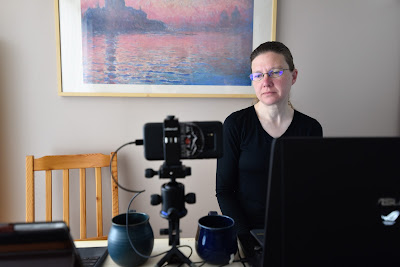 In the coming weeks we are due to give virtual presentations for Nature Kids Nature Alberta in celebration of World Migratory Bird Day on May 9th, the Nature Network of Ontario, Nature Guelph, NatureKids BC, Nipissing Naturalists and the Bruce Trail Organization.  Beyond these we have been working for the past few months with Ontario Nature's Magazine and their summer issue should feature our walk as one of it's stories.

We are also hoping to complete and publish our blog for hiking Ontario's Bruce Trail which we section hiked from 2014 until 2018.

It has been a productive winter for 'Come Walk With Us' but being back on the Great Trail will seem like welcome change of pace.  We will be posting on how our hiking plans for 2020 have changed owing to Covid 19 in the coming days.

Stay safe and looking forward to seeing you all (at a socially responsible distance) on the trail soon! 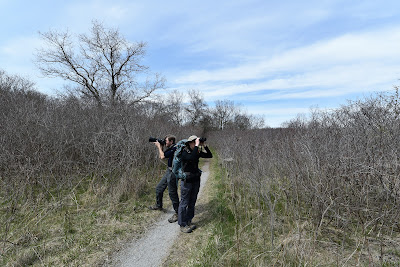