A Blustery Day : Beyond Stead to Brokenhead

Last night several heavy rain showers blew through, bringing high winds with them. We were very happy with our sheltered campsite which kept us away from the worst of it. When we crawled out of the tent into the damp and chilly morning we were happy to see the clouds breaking up as they raced across the sky.  Despite the predictions of the weather network it did not appear that we were in for 5-10mm of rain this morning!  Small blessings are the best (especially early in the morning). 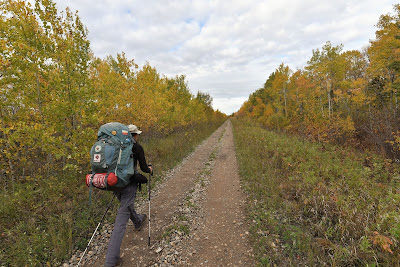 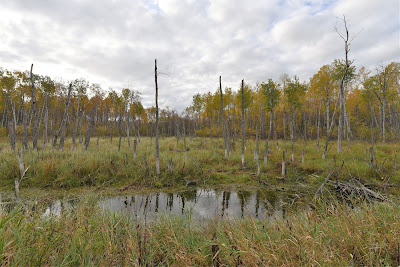 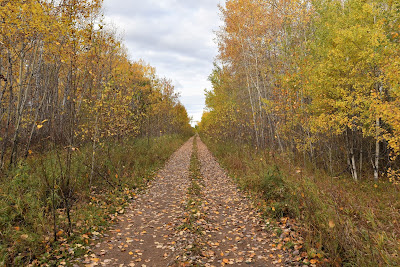 Haven eaten our Raisin Bagels and enjoyed our tea for breakfast we packed up and continued down the trail. We spent the morning continuing down the ATV track, surrounded by forests and marshes. Bright yellow aspen leaves fell around us like rain as the wind picked up throughout the day. The trail was covered with yellow, orange and green leaves, and last night's rain clung to many of them in small silver droplets. 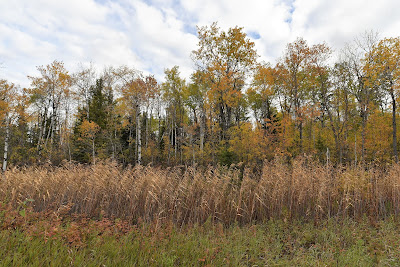 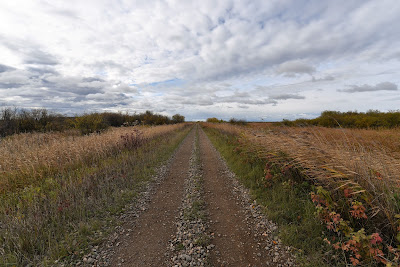 As the morning grew more blustery we crossed several dirt tracks, before entering Beaconia. After passing a few homes we found ourselves on the edge of a huge, wide open cattail marsh. Shrubs and bushes on either side of the trail obstructed our view, but we could hear the roar of a large body of water some time before we saw it. 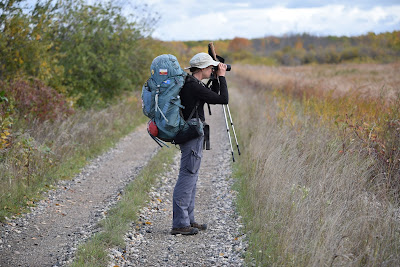 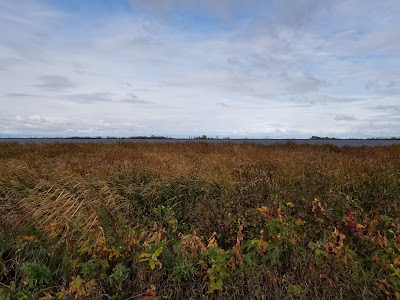 Suddenly we emerged from the tunnel of trees and were slammed by the wind, just as we saw the white-capped waves of Beaconia Lake, which is a small body of water located at the southern end of Lake Winnipeg. This 24,514 square kilometer lake is the sixth largest freshwater lake entirely within Canada, and the eleventh largest freshwater lake in the world. Although it has a very large surface area, it is relatively shallow, with an average depth of only 12 m. Lake Winnipeg's east side has pristine Boreal forests and rivers, remote sandy beaches, limestone cliffs, and bat caves that have recently earned it the UNESCO World Heritage designation. 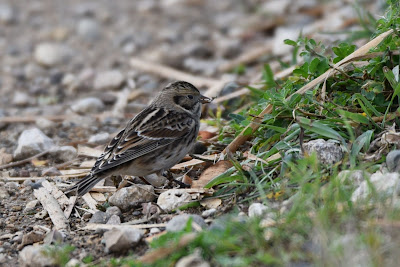 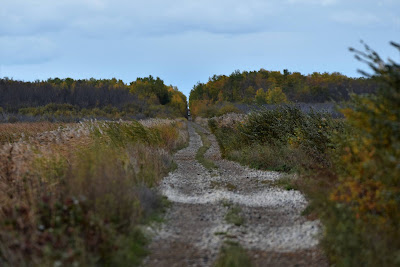 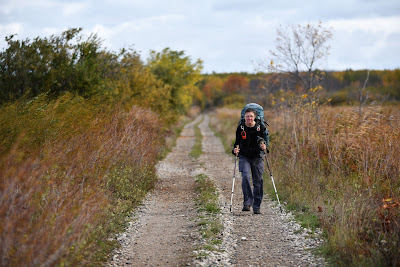 As we walked along the raised ATV track, with Beaconia Lake on one side and a huge cattail marsh on the other, it was easy to see how this habitat is normally a birderwatcher's paradise. Unfortunately the wind was blowing so hard it was difficult to stay upright in the stronger gusts, and the birds were faring little better. Small birds would launch themselves up above the reeds, immediately get blown sideways, and tumble down into the reeds again, disappearing from sight before identification was possible. The definite highlight was seeing an American Bittern take flight from the trail edge and disappear into the reeds. A small group of Wood Ducks was able to hold their own just offshore, as well as a pair of American Crows. A lone Herring Gull played in the whipping wind, but not much else was visible for long. 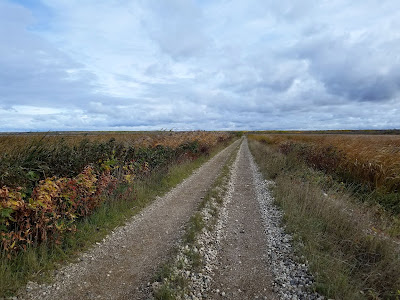 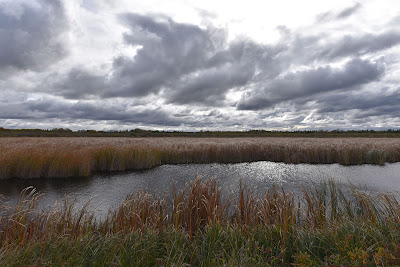 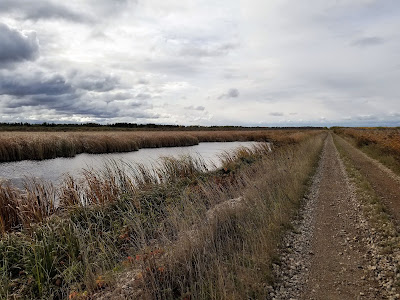 This area has a number of sandy beaches, and is a popular destination for swimmers during the summer months. It is also a fantastic place to go birding, with over 220 species of birds having been observed at Patricia Beach Provincial Park, which is on a sandbar that almost separates Lake Winnipeg from Lake Beaconia. 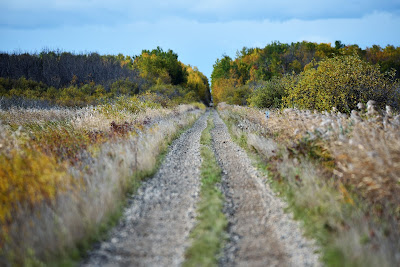 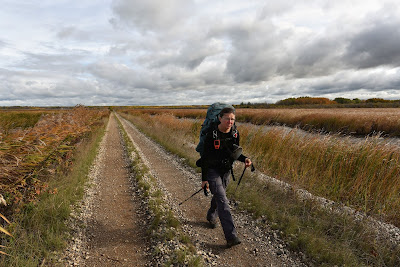 As soon as we made it into the trees on the far edge of the lake we were sheltered from the worst of the wind again. From there it was a relatively short walk down the track to the Brokenhead Reserve No. 4. The reserve gets its unusual name from the Brokenhead River, which was named in honour of an Anishinabee legend. The story goes that when the Indigenous People first arrived in the area they camped at the mouth of the river. As it was getting dark they saw a huge head rising out of the water, with horns and long hair. To them it resembled a giant bull buffalo, and a brave warrior pulled out his bow and arrow. His shot was so hard that the great head split in two and sunk beneath the waters of the river, never to be seen again. From then on the river was called Pas-ka-ta-bay Cee-pee, or the River of the Broken Head. 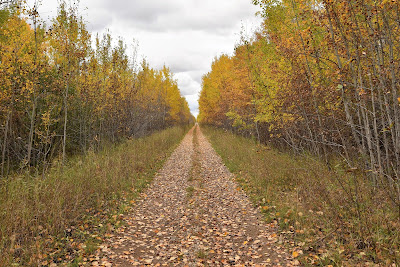 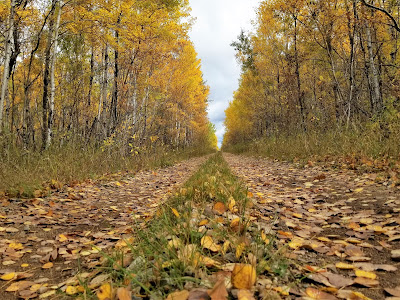 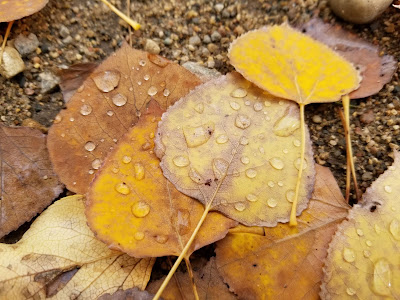 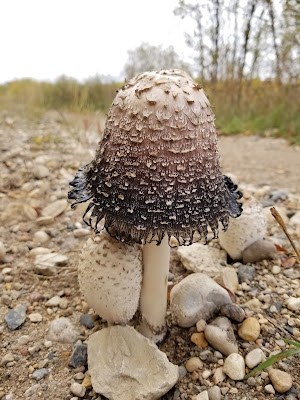 Although the community of Brokenhead, which also seems to be called Scanterbury, was only 14 km from where we camped last night, we were frozen and soaked by the time we reached it. Improbably, we found the South Beach Casino and Resort located in the community, which looked like something that belonged in 1960's Florida. However, it offered very inexpensive hotel rooms, and we decided to take one. It has rained heavily all afternoon and the wind is whipping the water sideways. With the loss of waterproofing in our tent and still struggling with sore bodies we feel that taking indoor was definitely a good decision. 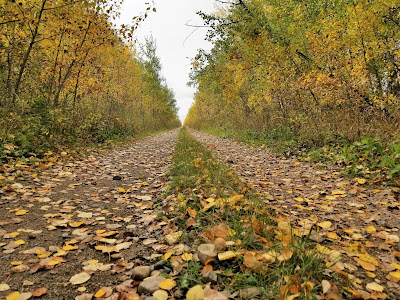 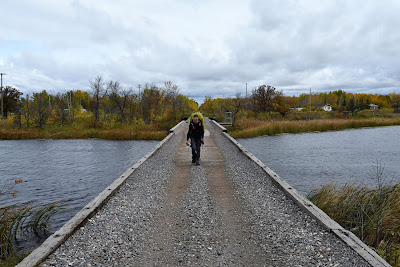 This hike has included many firsts for us, and 'visiting' a casino is certainly one of them. We lack the funds to gamble, and wouldn't do so even if we could, but getting a glimpse into this world has certainly been interesting. 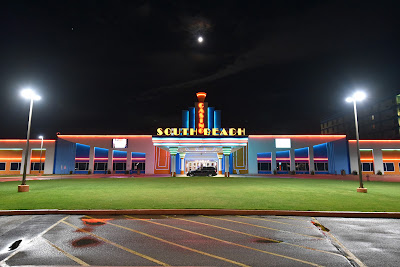 Even more improbably, we met someone here who remembers her aunt hosting Mel Vogel as she passed through last winter! Odd conversations in odd places lead to wonderful discoveries.