TVO's The Agenda : Hiking Canada’s Great Trail in the name of Citizen Science

Before the New Year we had the wonderful chance to talk with the gracious Mary Baxter of TVO's The Agenda!  During the interview we were fortunate to be able to share some of our tales from the trail, talk about nature and the need to keep youth connected to the outdoors,  discuss some of the challenges we have encountered as well as highlighting the wonderful support we have received.   It was a great opportunity to share our story and introduce more people to the joys of Citizen Science and Birding here in Canada!

Hiking Canada’s Great Trail in the name of Citizen Science

TVO.org speaks with bird ecologist Sonya Richmond about why she and her partner quit their jobs, sold their house — and set out to explore the world’s longest recreational trail 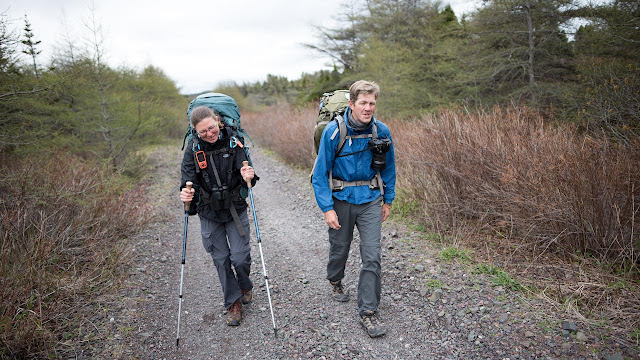 LONDON — In 2019, Sonya Richmond and her partner quit their jobs, sold their Simcoe home, and gave away their belongings — including their three cats — to hike the Great Trail. At 24,000 kilometres, the trans-Canada recreational trail is the world’s longest.

"We were starting to feel like the digital world was taking over our lives,” says Richmond, a bird ecologist. Her partner, Sean Morton, is a photographer and writer.

“We were spending all day sitting at computers, and then in the evenings, we were watching TV and checking Facebook and email and Instagram.”

They’d already tried walking tours in Europe. But they wanted, she says, to “walk across our own country and to try to inspire other people to connect with nature.”

Proceeds from the sale of their home are financing the hike (they also raise funds through donations and an online store). Spring, summer, and fall, they walk about 25 to 35 kilometres a day — a distance equivalent to a hike from downtown Toronto to downtown Mississauga — then post their finds and thoughts online. They crossed the Maritimes in 2019 and this year hiked through Ontario and the western portion of Manitoba. If they complete the trail’s three main legs, they will become the first duo — and only the fourth and fifth people — to have done so, Richmond says. They hope to complete the trek by the fall of 2022. “We’re hoping to get to British Columbia by next Christmas,” she says. “And then we’ll head north the year after that.”

TVO.org recently caught up with Richmond in London, where she and Morton will be staying until their hike resumes in spring. 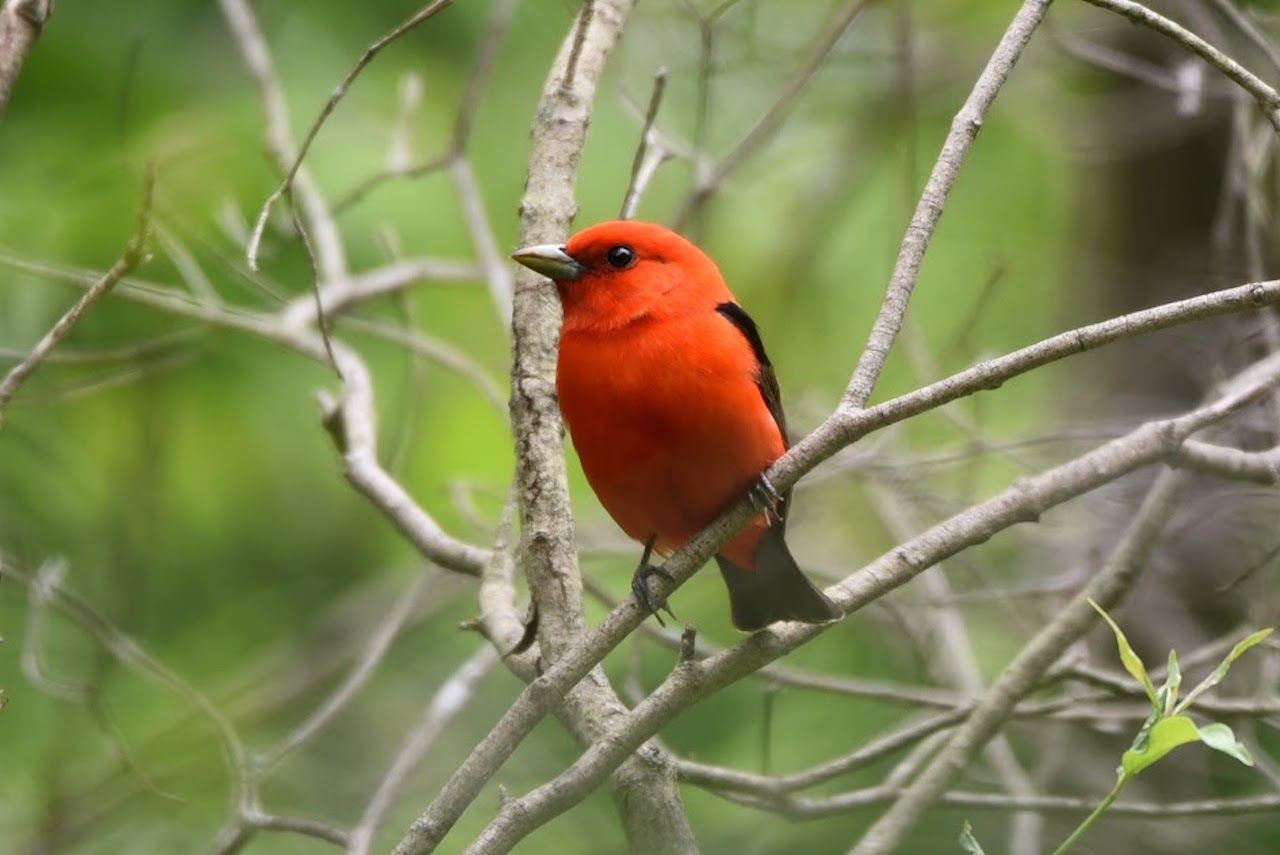 A scarlet tanager on the Cataraqui Trail, near Portland. (Sean Morton)

TVO.org: How do you prepare for a trek like this?

Sonya Richmond: We started by looking at the Great Trail website and figuring out which portions we were actually going to hike, because some of it is water — meant to be canoed or kayaked or done in a watercraft. We’re just doing the parts that we can walk.

We tried to get as much information as we could from guidebooks. We looked at people’s blogs.

We tested our gear out. The year before we set out on our cross-country hike [in 2018], we did the East Coast trail in Newfoundland.

We started hiking on June 1, 2019, in Cape Spear, Newfoundland. That’s the easternmost point in North America. We got as far as Rivière-du-Loup in our first year, and then we took the winter off. Then this year, COVID-19 hit. Quebec was still closed when we started. So we began hiking this year in Ottawa, and we got as far as Winnipeg this year [before returning to London for the winter]. 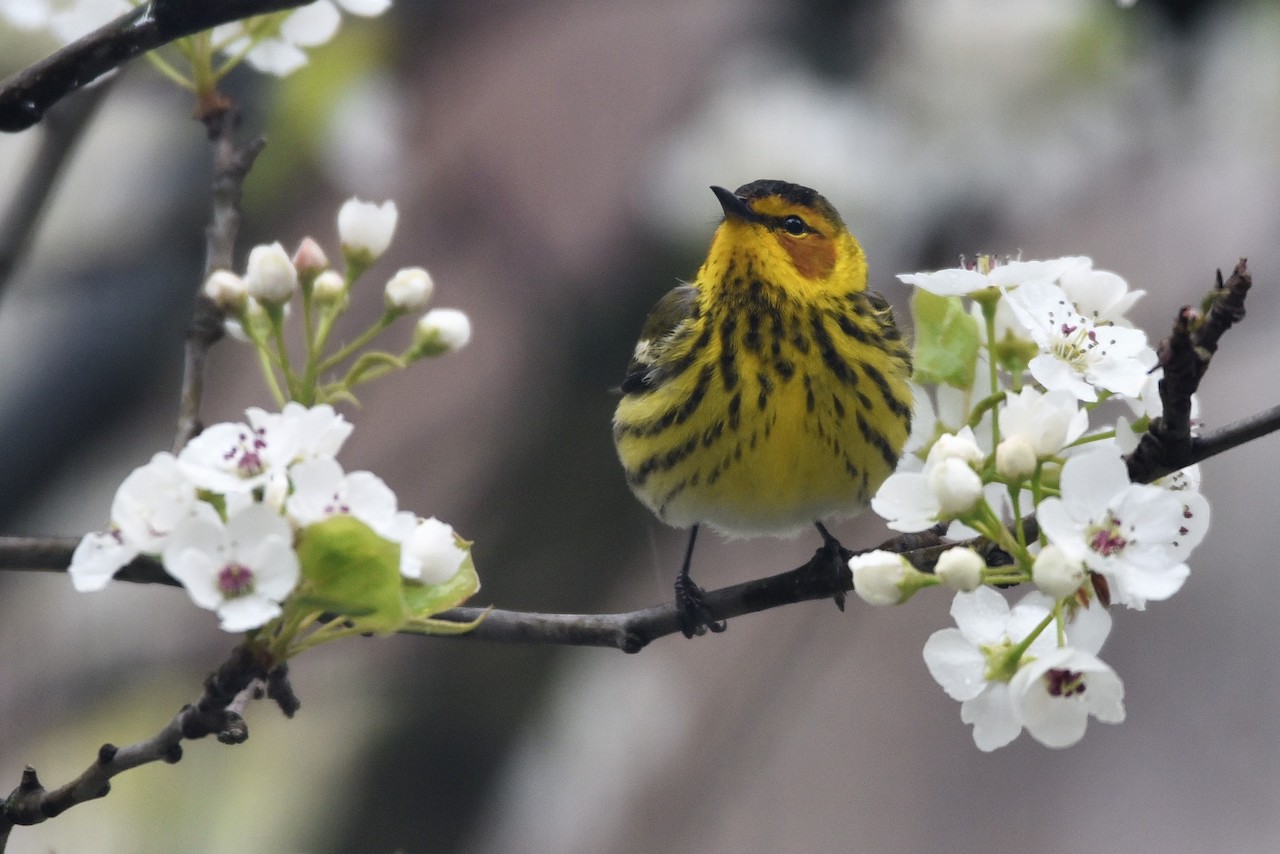 The Cape May warbler can be spotted in southwestern Ontario in early spring. (Sean Morton)

TVO.org: What were some of the trails that you took across Ontario?

Richmond: Ontario has over 2,500 kilometers of walking trails that are part of this trail. One of our favorites was the Cataraqui Trail just outside Ottawa. It went through alvar [habitat] — limestone plain country. There were a lot of marshes, so it was full of birds and turtles and wildlife. It was just gorgeous.

Another favourite was the Casque Isles Trail, which is up on the north shore of Lake Superior. It’s just gorgeous shield up there. It’s also a wilderness trail. We camped along it.

TVO.org: What has been the main challenge?

Richmond: If you’re on a trail like this, to enjoy it, you have to learn to accept and not to expect — which sounds simple, but sometimes it’s not. If you think of your daily life, you pretty much know generally what your day is going to look like, barring some kind of disaster. If it’s planned out, you have a routine, and it just sort of goes.

But if it doesn’t work out, something else almost always does come along. Often it’s the kindness of strangers, just random acts of kindness that they’ve done — people unexpectedly bringing us water, bringing us food, offering us a place to stay. You just have to trust that it’ll be okay. 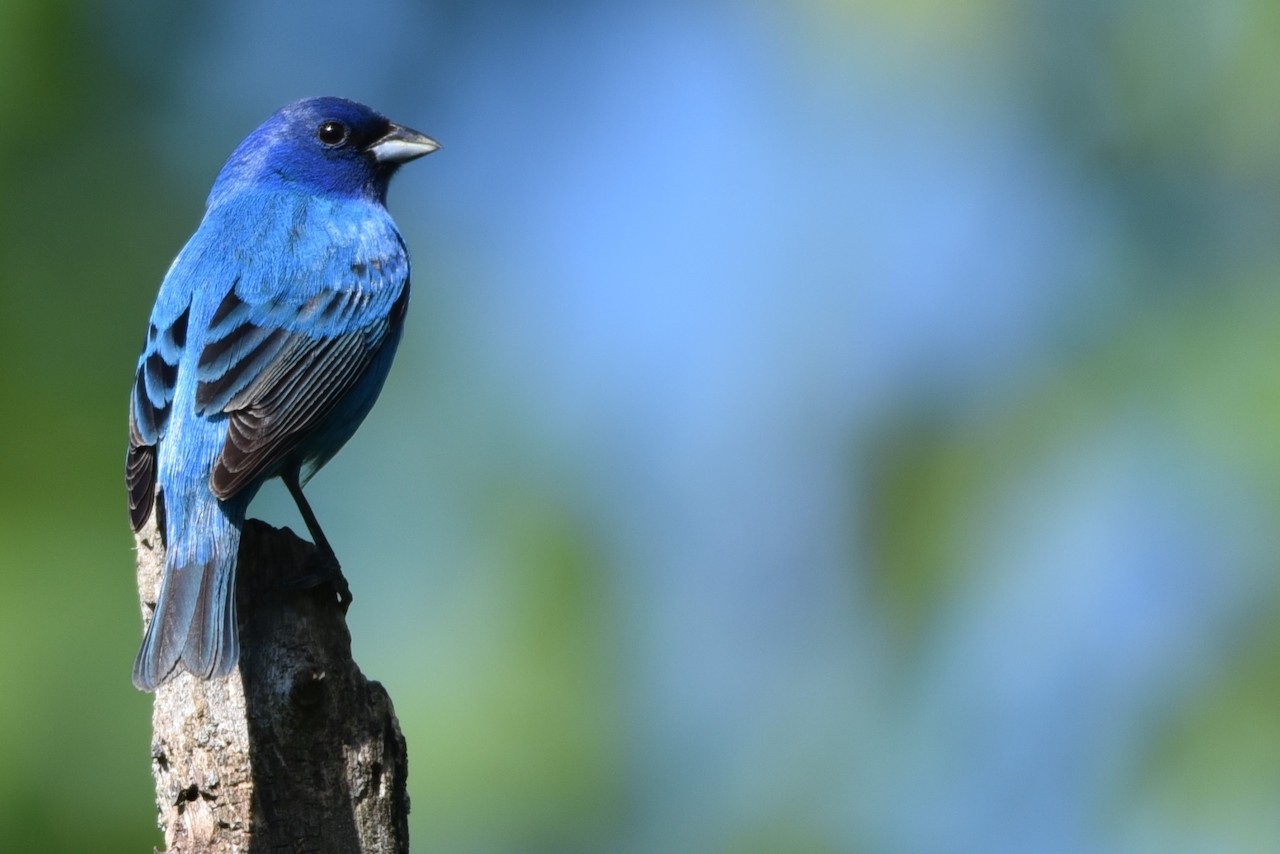 TVO.org: What have you noticed about the wildlife?

Richmond: We actually saw a lot of red foxes and porcupines — the porcupine has become my favorite animal.

One of the scarier things that we’ve not so much seen ourselves but have heard from people we’ve talked to [involves] the most frequent question we’re asked: Where have all the birds gone?

People have these stories of living in the same house for 40 years and putting out a bird feeder, and they say 40 years ago, they’d fill the feeder up at seven in the morning, and by noon it would just be dead empty. Now, they’ll put out a feeder, and they say it’ll take two to three days sometimes to empty out the same feeder.

Last year, a report published in the journal Science that said one in four birds in North America has disappeared since 1970. It was one thing to read that in a scientific paper and another to hear people who had actually experienced fewer and fewer birds.

Hearing these stories strengthens our sense that we need people to develop this connection to nature to notice what’s going on and to hopefully be inspired to do something, to help it. 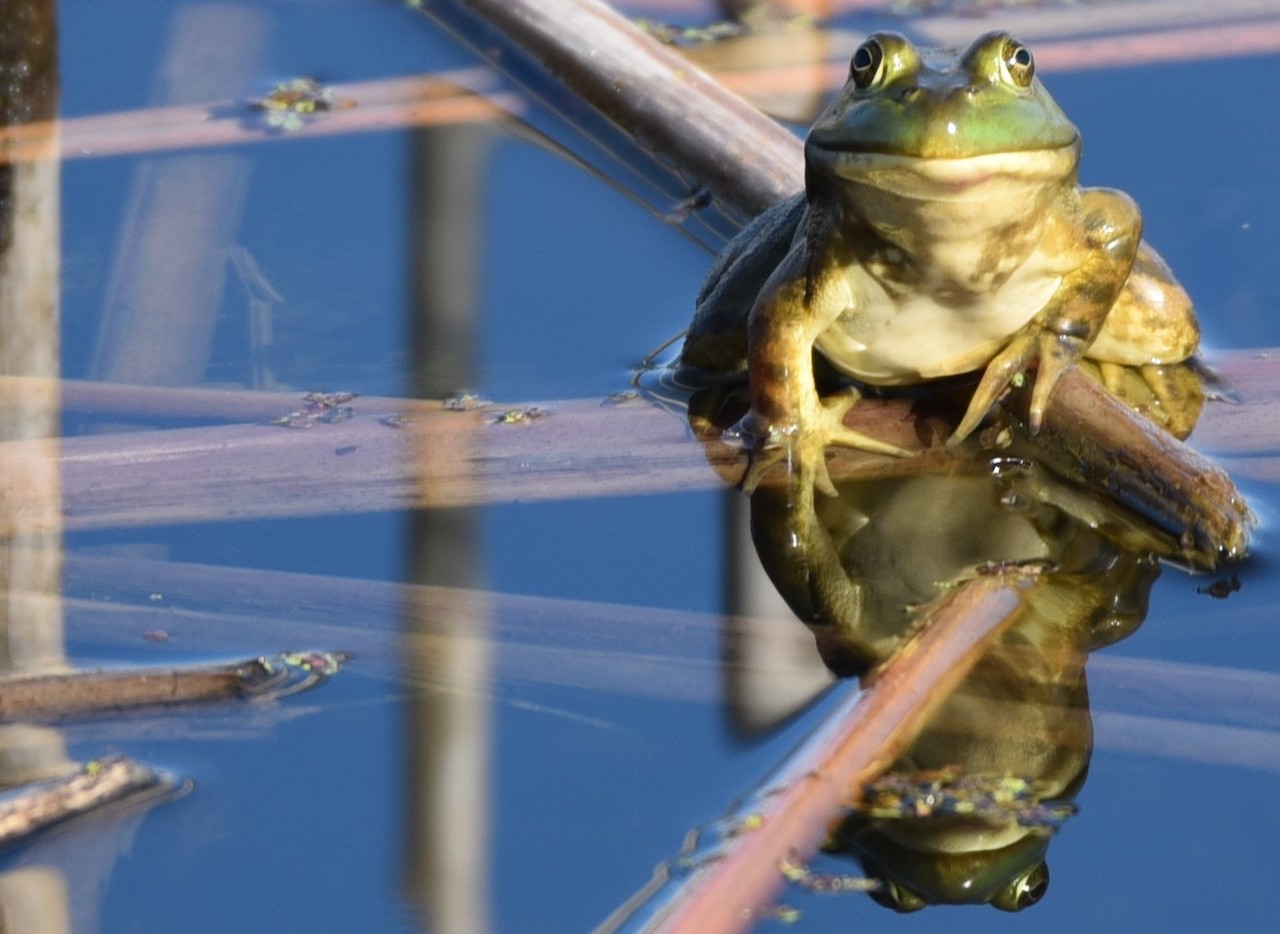 An American bullfrog at the Wye Marsh along the Tay Shore Trail, near Midland. (Sean Morton)

TVO.org: When you talk to people, what has been the response?

Richmond: We are doing a lot of outreach. We’re doing presentations; we’re doing interviews. In almost every talk, people come up and share stories with us of trying to get their kids interested in nature, trying to get them outside. It’s a huge struggle. The online world is incredibly appealing.

Richmond: A citizen scientist is anyone who goes out into nature and observes something like a wildflower or a bird or a plant and then submits their observation to an online monitoring group. You can do it if you’re five years old, if you’re 95, if you’re an expert, if you’re an amateur — it doesn’t matter.

Increasingly, wildlife managers and scientists use data collected by citizen science to monitor our wildlife populations. It’s incredibly important to have this data, and there are free apps available on your phone where you can take a picture of something and then upload your photo. One of the apps, iNaturalist, is almost like a treasure hunt. As you start to collect different plants or animals or trees, you start earning badges, and you can join various challenges.

Richmond: The people, especially this [past] year. We expected with the pandemic that we would be pretty isolated. We took extra supplies; we took these precautions so that we wouldn’t be interacting with communities as we went, just to keep everybody safe. But people still reached out even this year to host us and provide us with water in completely physically distanced and safe ways.