After a decade of trailblazing and inspiring his fellow Canadians, today Dana Meise completes his trek to visit all three of Canada's oceans along the Trans Canada Trail, now known as the Great Trail.  After starting his hike in 2008 in Newfoundland Dana has since hiked west to Victoria British Columbia and now has completed his trek north and arrived in Tuktoyaktuck Northwest Territories.

Over the years Dana has overcome a number of obstacles, but while doing so has inspired countless Canadians to hike the nation's trails, get outdoors and to explore the geography, history and culture of the country!  Congratulations of your magnificent achievement and at completing your Great Hike! 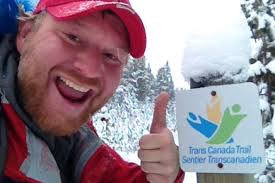