Today we had some much needed and appreciated respite from the heat, but the trade-off was that it rained ... a lot!

We enjoyed one final day of slack-packing by taking the GO train back to Oakville, and walking the 3 km down to the Waterfront Trail without all our gear. When we reached Oakville the morning sun was peaking out, already turning the world into a sauna. We made our way through the construction on the fashionable main street, with its fancy bistros, pastry shops,  and tastefully done flower boxes. Along the way we stopped for a cold drink at Starbucks and ended up sharing our story with the barista, who seemed curious, enthusiastic, and a little dazed by the magnitude of the undertaking. 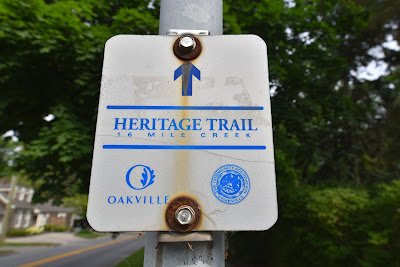 We crossed the bridge over 16 Mile Creek, getting a nice view of the Harbour, which was filled with sailboats, and the small lighthouse in the bay. From there we continued hiking west on the sidewalk running along Lakeshore Blvd. which is part of both the Waterfront Trail and the Great Trail. 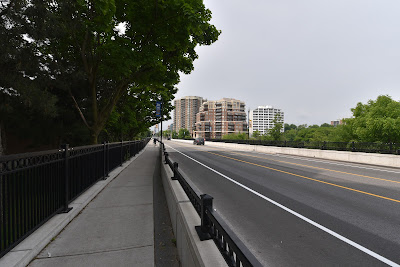 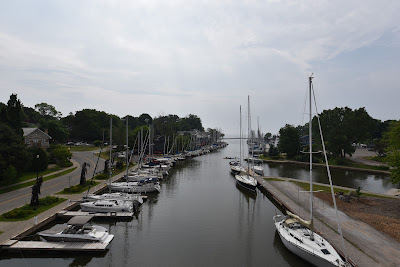 As far as road walking goes, today's stretch was the very best kind. The sidewalk was shaded by huge, tall trees, there was a grassy verge between us and the traffic, and the street was bordered on either side by well-landscaped mansions. We passed properties with gatehouses larger than some of the apartments we've lived in, and others with pool pavilions bigger than our previous house. Appleby College, which is an independent high school for the offspring of the wealthy, boasted eight tennis courts, a swimming pool, stables, and grounds complete with their own walking trails. We've spent a lot of time considering other ways of experiencing life lately, and all this wealth and opulence gave us pause to consider yet another set of experiences that are not our own. 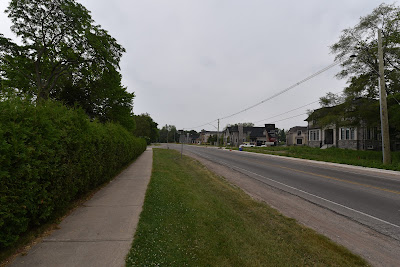 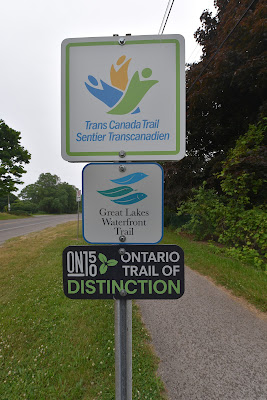 We passed far fewer lakefront parks today than we did yesterday, but there were a few. Coronation Park was the first one we passed. This large greenspace offered a covered picnic shelter, small beach, beach volleyball courts, and a (still closed) playground. We were happy to see quite a few people out enjoying the greenspace, even though a gentle rain had begun to fall. 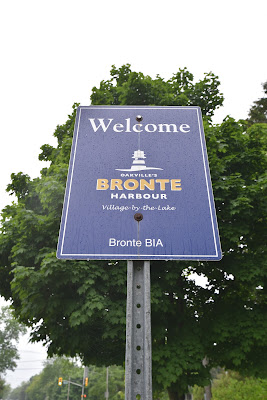 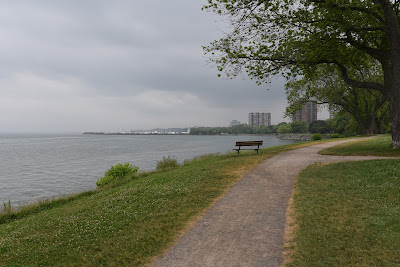 As we approached Bronte the trail diverted down to the waterfront as a nice flat walking path through Water's Edge Park. The lake was a light grey, reflecting the storm clouds above, and the horizon was soft and obscured by the rain. A few Ring-billed and Herring Gulls floated offshore, and a solitary Common Tern patrolled the shoreline for fish. 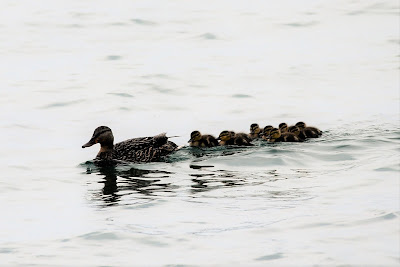 A row of townhouses faced the shore beside the path, many of which had beautifully landscaped gardens. Several of the yards boasted colourful and creative rock art collections. 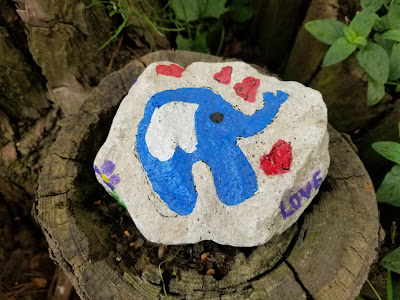 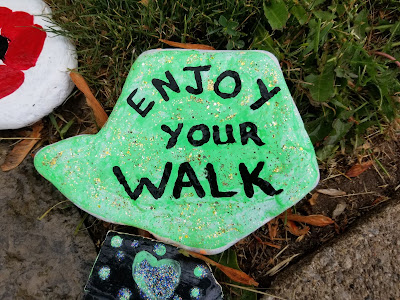 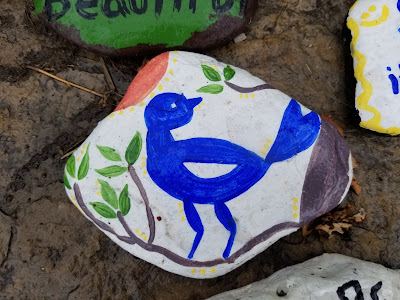 As we walked towards the downtown we stopped to watch a family of Mallards and two Mute Swans swimming in the lake. A very friendly Indian lady saw us watching the birds and showed us photos she'd taken of five cygnets in Port Credit. As we continued on an Asian Canadian mother and her two boys stopped to ask what we were doing. The boys had lots of detailed questions about camping and hiking, and seemed very curious about everything. It was wonderful to see so much interest in birding, nature, and the outdoors. 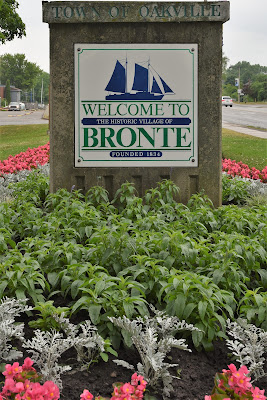 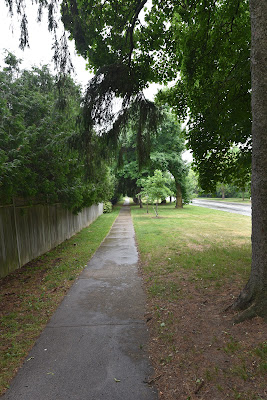 When we reached Bronte we found another very posh downtown street, and another charming little harbour full of sailboats from the Bronte Yacht Club. There were also a few people out in kayaks. Just as we crossed out of town it began to rain again, gently at first and then much harder.

We stopped under a tree at the edge of town to see if the rain would let up, but it persisted. We moved from the dense maple we'd been sheltering under to a conifer when the maple canopy began to 'leak'. I am always amazed that trees with needles provide more shelter than deciduous leaves - it seems backwards to me. When the rain didn't decrease we decided to continue on. At least it was warm out.

When we reached Lakeside Village we decided to stop for a coffee at Tim Hortons, more to take a break under the awning and shelter from the deluge than anything else. As we sheltered, one of the employees from Tim Hortons came out on break and asked about our hike. We chatted for a bit and she told us that she moved to Lakeside because of the nature, that she sees Wild Turkeys, White-tailed Deer, and rabbits in her backyard all the time.

It was a pleasant but extremely wet walk from Bronte to Burlington. The trail followed Lakeshore Blvd with the exception of a small diversion into Shell Park. This large greenspace, which straddled both sides of the street, provided habitat for songbirds. Earth footpaths threaded through forested areas along the lake. Unfortunately, it was raining too hard to do much birding. 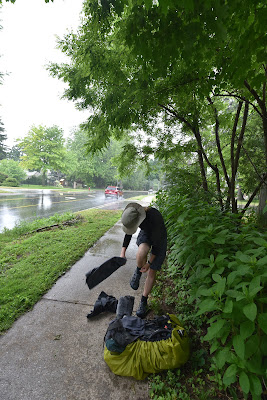 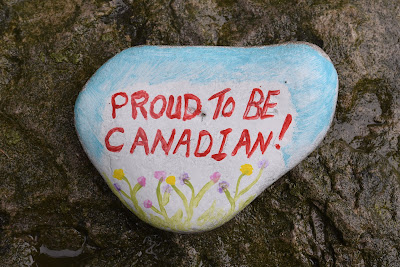 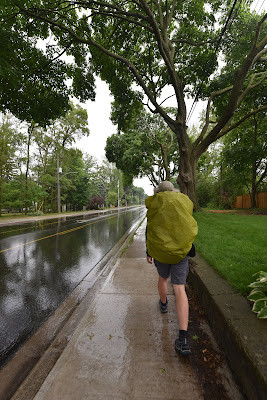 Just as we were approaching the outskirts of Burlington, a car stopped in a driveway just ahead of us and a man jumped out. His name was Steve and he said he'd seen us back at Coronation Park and wanted to 'be a little Canadian' and make sure we were okay and not lost or anything. He said he was a hiker himself, and when we told him about our trek he said it is a dream of his to cycle across Canada. These random acts of kindness and generosity by strangers always leave us humbled, grateful, and feeling like our faith in humanity is being restored. 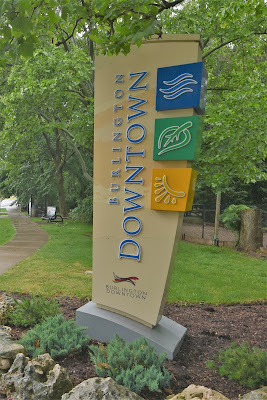 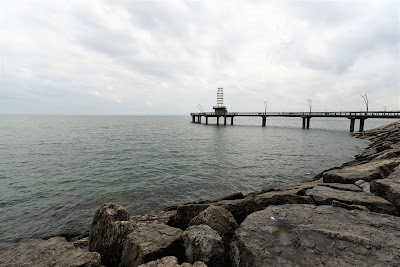 When we reached downtown Burlington the rain finally let up a little. We walked out onto the Brant Street Pier. A lone Canvasback was paddling in the choppy waters. A myriad of Cliff Swallows were skimming the water for insects to bring to nestlings on the underside of the pier. A Caspian Tern swooped and dove for fish. Using binoculars we watched as a huge and steady stream of Double-crested Cormorants flew to and from the flint that nests by the bridge. 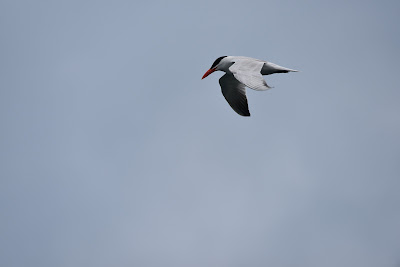 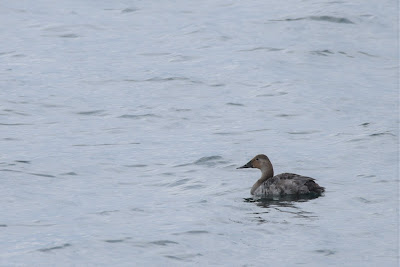 From the Pier we walked up Brant St. to the Burlington MEC store. The physically distanced line-up stretched around the outside of the building, even in the rain. We were surprised but encouraged by this, as we hope MEC is able to survive these troubled times. A new pair of hiking socks for Sean was worth the wait. After this important purchase we headed back to the GO train and back to the hotel to dry off. Tomorrow we will continue west from Burlington with our gear. 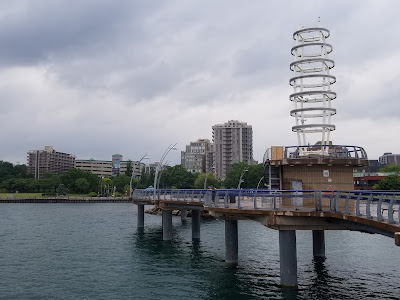