‘This isn’t the TCT you are looking for’ : North Battleford to Meota and onward to….Vawn

Today was another long day on the Trans Canada Trail, but it brought a few interesting changes.  The walk out of North Battleford followed a beautiful paved bike path alongside Territorial Rd for a few kilometers, which had beautiful shade trees and benches along its length.  After that we followed the usual gravel road north and then part of the highway to Hamlin, which is 14 km north of North Battleford.  In Hamlin we passed another historic plaque for a school, and then walked by a busy depot with a row of modern grain elevators lined up along the railway tracks.  A stream of trucks was driving into the depot, dropping off loads of grain, and a long string of railway cars was parked alongside, ready to receive the bounty.  Thankfully this part of the morning’s trek was uneventful! 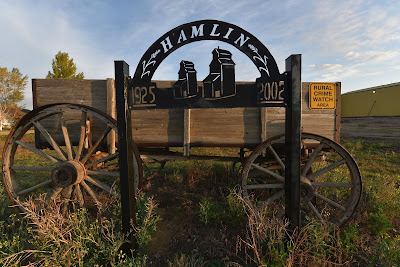 As we turned north again, heading towards Meota, we began to see the first of many large, industrial plants sitting out in the harvested fields.  Indeed throughout much of the day the agricultural fields that we have traced for the past 3 months throughout Manitoba and Saskatchewan would slowly give way to more and more Industrial sites.  We later learned that the processing facilities are operated by Serafina Energy Ltd., which is a Canadian, private, intermediate heavy oil company.  It produces approximately 25,000 barrels per day of thermal heavy oil at Steam Assisted Gravity Drainage facilities near Meota and Edam.  In addition to the facilities, we started to see cleared square patches of earth with small oil dereks in the center located out in many of the fields.  As we passed by the massive processing complexes a strong, unpleasant smell carried on the wind that made us feel slightly queasy. 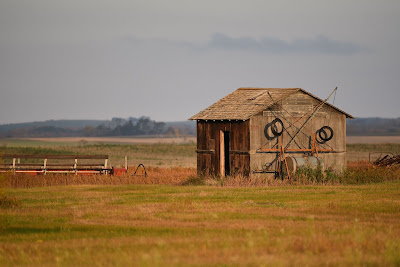 We made our way north under a very bright blue sky, on a hot sunny morning. Many beautiful, romantic looking, abandoned wooden buildings stood at the edges of fields now mostly turned a rich dark brown, bleached blond, or faded green.  Some of the trees already had bare branches, while the leaves on others have turned a darker, burnt orange, coppery brown, or faded yellow.  The colours still burned incredibly bright under the blue sky, but it feels like autumn is beginning to gracefully slip away. 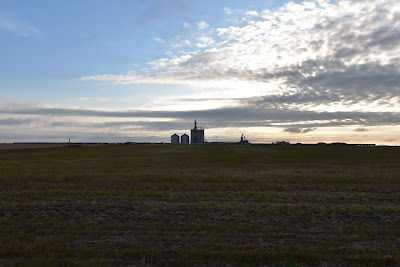 It was also another day full of Snow Geese.  At one point we spotted a large group of several thousand Snow Geese resting in a harvested field of grain and looking a lot like a snow drift.  A smaller group of Canada Geese, led by a single white Snow Goose, approached from the east, and as they drew level the Snow Geese rose up out of the field in a swirling vortex of wings and squeaky honks.  The group seemed to move as one, looking like the Luck Dragon from the Never Ending Story, as it undulated and shimmered in the air. After several passes around the field the birds calmed down, returning to the field to rest. 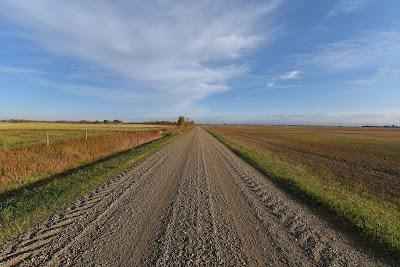 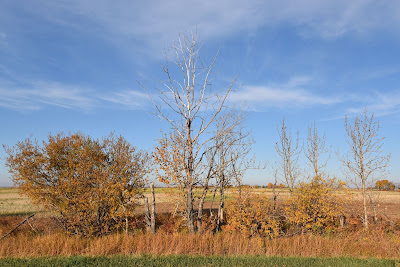 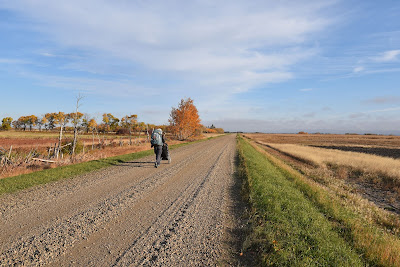 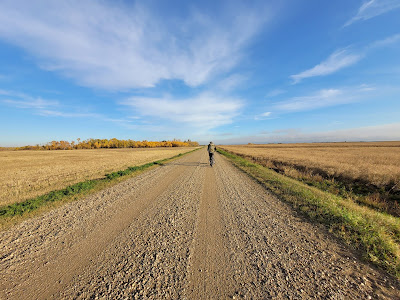 For a short distance we followed a lovely dirt track that paralleled the abandoned railway.  For those few beautiful kilometers we were reminded of what it felt like to hike a trail intended for walking.  We thoroughly enjoyed being free of the choking dust from passing cars and trucks and having to plough through the deep, soft, sand and gravel.  It was a few short kilometers of purely enjoying the fall colours, the bird songs, and quiet openness of the landscape. 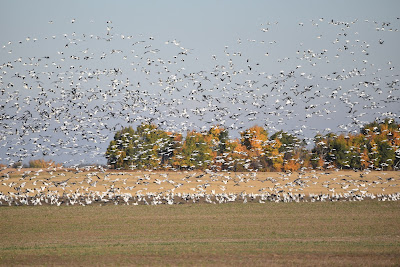 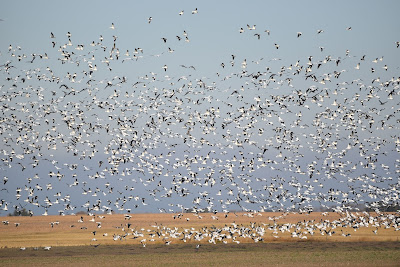 All too soon we were back on a gravel grid road, and sharing it with oil field traffic.  There are times when we feel like the Matrix is playing tricks on us, and as we attempted to cross a one lane concrete bridge of the style used in the Qu'Appelle Valley, we converged with two other vehicles.  It seems so unlikely that in a landscape so open, vast, and empty, the four people who are within a 10 km radius all arrive at a single narrow bridge simultaneously.  Yet that is exactly what kept happening repeatedly today. 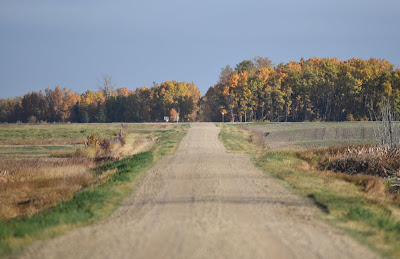 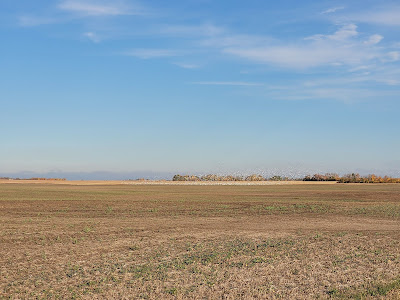 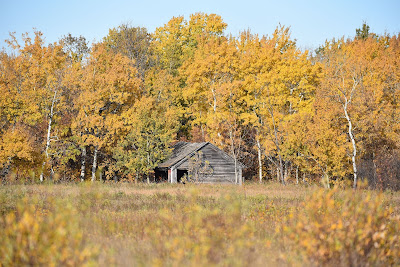 Shortly afterwards we came to the trail branch that led off to Meota, which is a small village on the shores of Jackfish Lake.  It's name is derived from a Cree phrase meaning 'good place to camp' or 'it is good here.'  We had originally had reservations to stay in the campground in Meota, but like several other places in this region, the Meota Regional Park closed early this year, apparently due to the fourth wave of covid.  As a result we arrived into this quaint community to discover that our reservations had been cancelled with no advance notification.  So no viable lodgings possible after 40 km of trekking we had little option but to continue onwards, hoping to find somewhere else to camp. 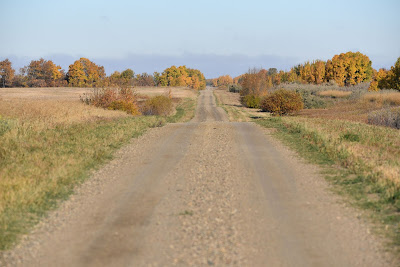 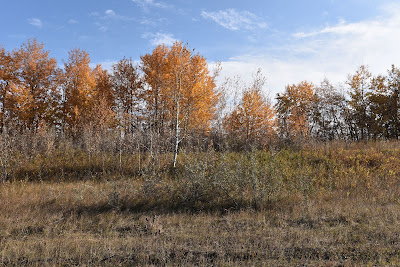 We returned to the TCT and headed west finding ourselves in a mix of flat, open fields and cow pastures.  As the afternoon progressed it occurred to me that herds of cows have distinct personalities.  Some of them come galloping across their enclosures at full speed in a ground-shaking wave to stand at the fence and look at us. Others are more shy, and one or two will trot away from us, eventually convincing the whole group that it's safer to stay well back.  Some herds just stop and stand stock still, each and every cow staring at us, some with half consumed grass hanging from their mouths.  Still others are quiet as we approach them, but then start mooing back and forth like gossiping old biddies, clearly discussing the strange sight before them. 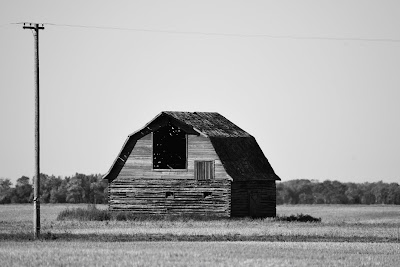 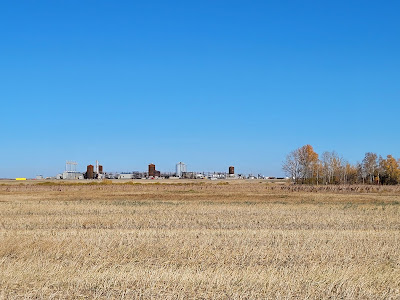 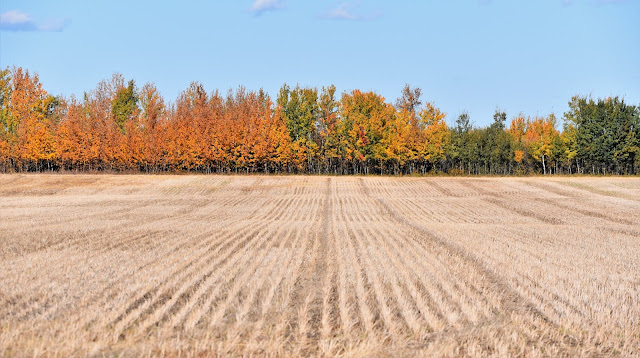 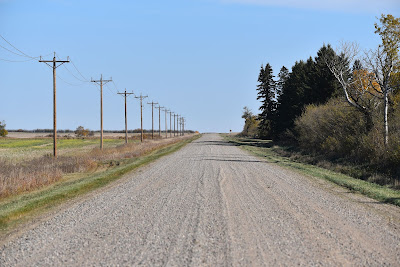 As we trekked onward from Meota we had initially set our sights on camping in a large tract of forest that showed up on the satellite image, but when we approached it we discovered it too housed a large herd of cows.  Once again, we found ourselves on a rather busy gravel road, hemmed in on both sides by fenced off pastures, with nowhere to camp but in the ditch at the side of the road. 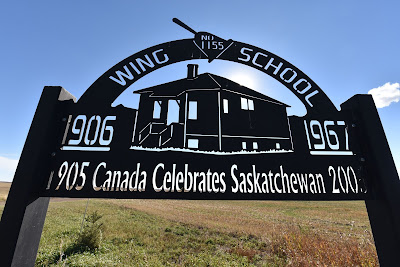 Over the course of the day several drivers stopped to ask if we were lost, where we were headed, and what we were doing.  On three separate occasions when we said we were walking the Trans Canada Trail, the drivers bluntly informed us that we were “off track” as it was on the abandoned rail line, which apparently follows the highway, and is an actual trail.  This is the first place in the prairies where the locals didn't know exactly where the Trans Canada Trail route was, and the fact that three of them suggested it should be on an existing rail trail made us wonder why indeed we were ploughing through more gravel if a trail actually exists here? 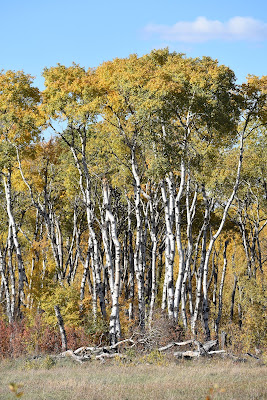 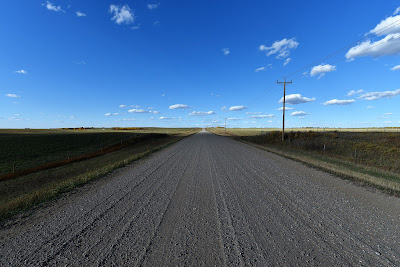 Part way through the afternoon we passed a sign for the Paynton Ferry, which we learned is part of the historic Paynton Trail.  Perhaps this is what the locals were referring to here?  The ferry began operations in 1907, crossing the river 6 miles north of Paynton, and serving as an important link on the Paynton Trail.  This throughway was used by settlers, First Nations Peoples, mail, freight, and produce wagons and it followed the path of least resistance, skirting around steep hills, deep gullies, wetlands, and sloughs.  As the railway made its way through Edam, Mervin, and Turtleford the trail lost most of its value as a commercial route. However, with the establishment of the Edam West oil patch in the 1970's and 80's the route came back to life, with the roads along the 'path of least resistance' being upgraded and re-established to service the oil filed traffic. 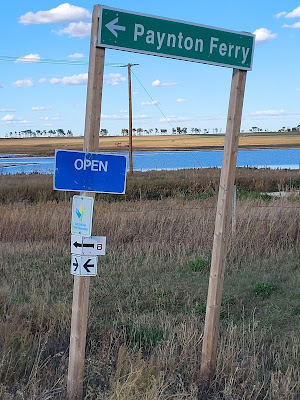 As the sun began to set and to really heat up an already hot afternoon, we were passed by a lot of very large farm machinery.  I was particularly impressed by a young teenage girl who was driving a huge tractor that was pulling an enormous metal bin behind it.  She was singing away to music as she passed us on the road, and a little while later we saw her driving in a field beside a second machine that was harvesting corn and dropping it into her truck.  The two vehicles moved in perfect synchronization, even turning corners without losing any of the harvested corn or really slowing down. 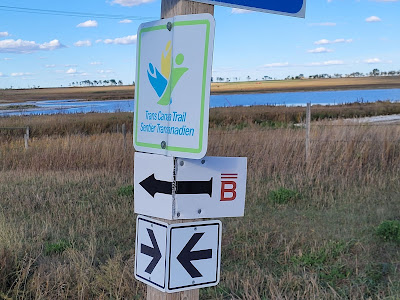 We were reminded of a comment made by Tom, who helped us around the waterway on the way to Saskatoon.  He said he appreciates farmers for their skills - that they are engineers, mechanics, carpenters, electricians, and plumbers, and they have the ability to fix or build anything.  Apparently their skills are developed at a young age, and include pulling off some impressive driving maneuvers during harvest.

As the afternoon wore on, and we began to approach the 55 km mark, we still couldn't find any appealing spots to camp.  Perhaps it is a sign that we are simply tired now, but instead of continuing to walk until dark, which would have put us over 65 km, we decided to divert off the trail to Vawn.  We stayed for the night in a small room in the Vawn Hotel, which had a shared bathroom down the hall and reminded us very much of the albergues in Europe.  Downstairs in the hotel bar and restaurant Sean had one of the best hamburgers he can remember, which likely came from fresh grass-fed local cattle. Many of the folks in the bar had seen us walking on the roads and came over for a chat as we all watched the baseball game on TV.   Here again we were asked about our hike, encouraged on, but also bluntly informed that the Trans Canada Trail was in fact on the local rail rail 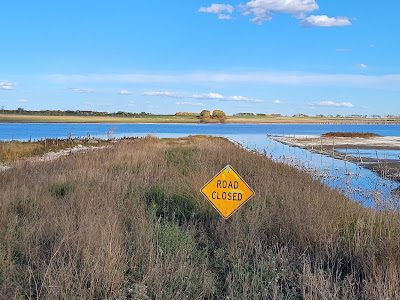 and not on the concessions.  And so, another long day on the trail with good weather, friendly people, and beautiful scenery came to a close. 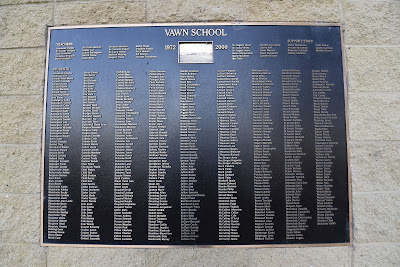