Since announcing our intention to trek along Canada’s Great Trail, a pathway some 24,000 km in length we have had a few questions what it is and how it compares to others trails throughout the world.  Maybe you've just finished the Triple Crown. Possibly you've completed the Camino Frances. Or perhaps you've sampled trails from around the world, and are looking for your next big adventure. If you're a long-distance hiker and you find yourself pining away at home and asking 'What's Next?' we think the Great Trail is definitely worth considering.

The Great Trail (formerly the Trans Canada Trail) is a system of greenways, waterways, and roadways that stretches across Canada from the Atlantic, to the Pacific, to the Arctic oceans. It will take you past rugged coastlines and lighthouses, beautiful boreal forest, wide open prairies, the Rocky Mountains, lush coastal rainforests, and the Arctic Circle. You will also visit over 15,000 communities, all the provincial capitals, as well as some of the nation’s largest cities including Montreal, Toronto, and Vancouver. And maybe best of all, you'll be able to brag that you've walked the longest trail in the world something which to date only 2 people have done! 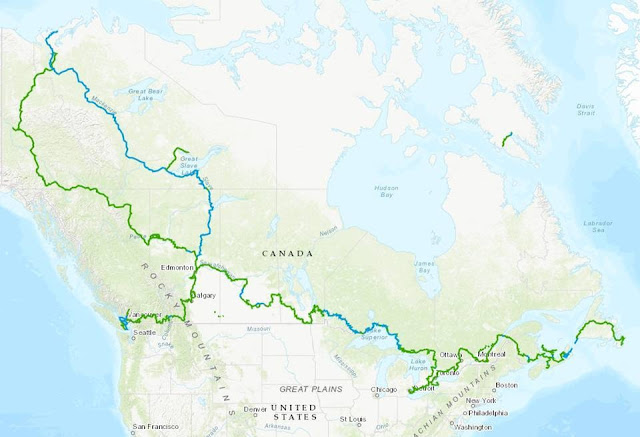 Just how long is the longest trail in the world?

The trail is a network of greenways and waterways, meaning some portions are designed to be paddled. Thru-hikers must either arrange intermittent access to a canoe, or find alternate routes around the water sections, one of which is over 1,000 km long. Around 30% of the trail currently exists on roadways or highways, not all of which have well-established shoulders. Finally, the trail cannot be completed on foot within three seasons, which adds a level of complexity to planning, preparing, and surviving.

And some juicy opportunities

If you think you're up for the challenge, you could well put yourself in the record books. The Great Trail was officially completed in 2017 for the Canada's 150th birthday. Dana Meise became the first person to officially complete the entire trail (excluding waterways) when he reached Tuktoyaktuk, NT in November 2018. Sarah (Rose) Jackson was the first woman to complete the east-west portion of the Great Trail in 2017, taking 1 day less than two years to complete it. There are two incredible ladies currently out there on the trail: Mel Vogel has been solo-hiking continuously since 2017, and Diane Whelan is making a trail documentary of her hike (check out the trailer she recently released!). To our knowledge no else has officially completed the entire trail, leaving many records to be set, broken, and attempted.

Sean and I aren't heading out to break any records, but we are hiking for a cause. Our next post will explain why we're inviting people to 'Come Walk With Us' by following our blog, and how we're hoping to inspire people to connect with nature through birding as we hike across Canada.