The Fourth Times the Charm : A return to La Belle Province....Quebec 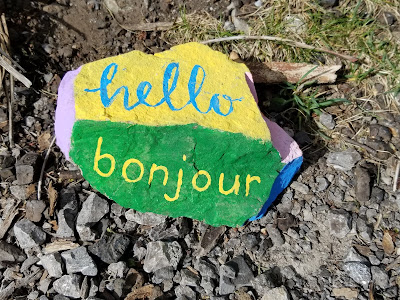 It was still pitch black when we headed to the VIA Rail station in London early this morning. As always, we were warmly greeted by the friendly VIA Rail staff, who proceeded to weigh our backpacks.  Although the results were rather depressing, with my bag weighing in at 52.3 lbs and Sean's at 59.8 lbs - before any food or water has been added to them - this small does of reality put only a slight damper on the morning.

By the time the pale yellow disc of the sun peeked through the heavy cloud cover, sending down delicate shafts of golden light, we were passing Port Credit, on the shores of Lake Ontario.  The trees were still adorned with the bright yellows, oranges, and reds of autumn, which contrasted with the stormy grey waters of the lake.

As the train raced through the countryside on its way towards Toronto, the bright red coat of a fox in a nearby meadow was set ablaze by the early morning light.  For two concessions, a white-tailed deer kept pace with the train,  bounding across light green fields and leaping over a small stream as though testing its youth and vigor against that of the train.  A coyote stood listening at the edge of a small wood, and flocks of Wild Turkeys were foraging and flirting among the heavy stubble of the year's corn crops.  Watching small brown rabbits nibbling on the dew soaked grass, and pairs of ducks paddling placidly in the large puddles that filled the low-lying areas, we could feel the energy and hope of the outdoors. 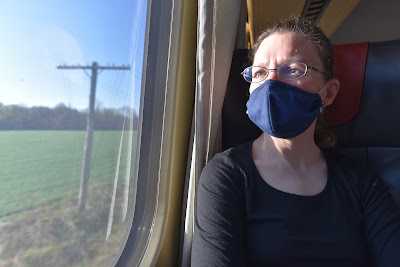 As we approached Toronto the clean elegant lines of the steel towers stood tall against the dark storm clouds, and although the weather was still warm and humid, few people seemed to be out enjoying the waterfront trails. Unlike earlier this year when we arrived in Union Station, this morning we found it alive with commuters, and the double line for our train to Ottawa stretched well back into the station.  Although being in faster paced and more densely populated cities has been a bit of culture shock after spending so many months in the wide open spaces of the prairies, it feels good to see the world finding ways to move forward again through the latest wave of the pandemic. 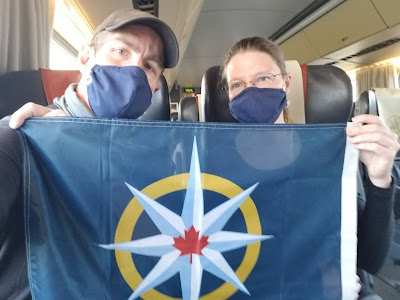 A few short minutes after pulling into Union Station we emerged again on a train bound for Ottawa.  As the train traced the shore of Lake Ontario we watched people cycling, jogging, and walking along the Waterfront Trail, which is also part of the Trans Canada Trail.  It felt strange to backtrack along a route we walked a year ago, and to pass by many familiar places, including the Rouge National Park and Ajax. Throughout the region the streets again had people on them, the sidewalks were teaming with individuals busily rushing about, and the local golf courses were extraordinarily full. 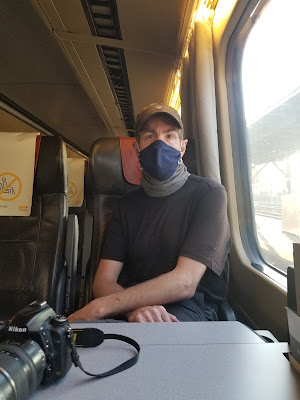 The afternoon passed quickly as the train took us effortlessly (on our part) through the beautiful autumn landscape.  As we approached Ottawa we began to recognize more places we hiked through last year- including Smiths Falls.  It gave us time to reflect on the different way we experience landscapes depending on how fast we travel through them.
At the train station in Ottawa we spent a few minutes standing up and stretching our legs, and we were delighted to find an open shop selling snacks, although they turned out to be prohibitively expensive.  This was a bit of a disappointment, because we will arrive in Quebec City after most restaurants have closed for the night.

As we headed out of Ottawa the day was already turning to evening.  The train passed through marshes and fields and we caught glimpses of both limestone and shield sticking up out of the ground.  A Great Blue Heron took flight as the train passed, and huge flocks of Canada Geese were grazing in many of the harvested fields.  A Red-tailed Hawk soared through the evening sky.

It was with mixed feelings that we sped towards the Quebec border.  This will be our fourth attempt to hike across this province, and we are hoping this time will be lucky.  In 2019 we were stopped by winter.  In 2020 Quebec closed its borders in response to the emergence of the global pandemic, and Ontario was locked down.  In the spring of 2021 we left following our first round of hotel Quartine as renewed travel restrictions were set in at the outset of the third wave of the Covid 19 pandemic.  As we make our fourth attempt, we face the shorter days of autumn, a forecast filled with copious amounts rain, bodies already fighting off exhaustion which are still loosing weight, as well as a challenging section of trail through the Laurentian Mountains, which we feel woefully unprepared for after the flat gravel roads of the prairies. On the other hand, autumn in Quebec is spectacular, and we're looking forward to enjoying established trails, beautiful scenery, and delicious food, which gives us reason to be hopeful.  We'll keep our fingers crossed as we once again enter the race against winter. 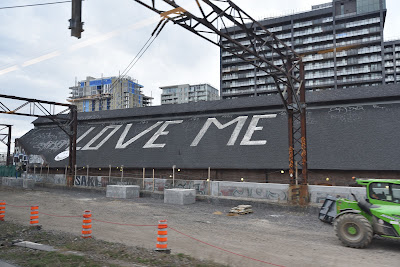 Heading in to Montreal, the cityscape was backlight by a beautiful pink sunset.  Owing to a brief delay here we took the opportunity to again stretch in the station.  Here we delighted, not only to stand up, buy to also find an open shop selling delicious tomatoes, cheese, and basil sandwiches on olive bread to enjoy for dinner.   While waiting for our train we were amazed by the beautiful murals in the station depicting the North, South, East and West regions of the Canada.  Excited Sean took out his camera and began taking pictures of them.  Surprisingly he was quickly approached, cornered and physically searched by several station security guards who professionally informed that photography in the station was illegal without expression permission of the station owner.  Apparently neither VIA rail nor the government own the station and so written permission is required and a hefty fee is due for all pictures taken. 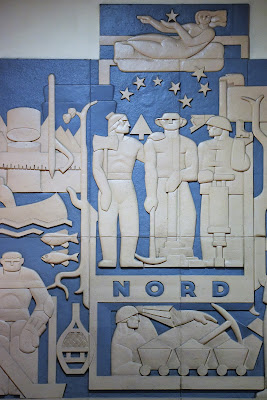 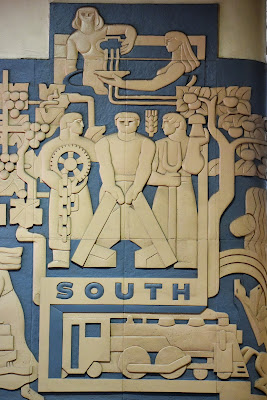 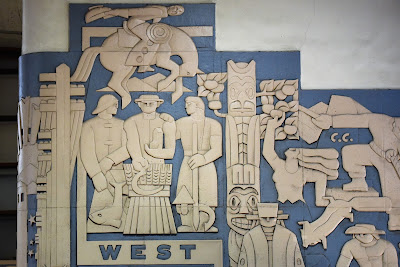 Stunned he apologized for the oversight and offered to delete the 3 pictures that he had taken – at which point the guard noticed the RCGS Expedition patch on our backpacks and asked what we were doing. What resulted was a wonderful conversation on our trek and about getting youth outdoors.  When the guards realized why the portrayals of each region in Canada would had meaning for us, and would be used for the blog they grasciously allowed us to keep the images and said adieu. We are both so thankful for the understanding of the security staff at Gare du Montreal!

When the train left half an hour later the light was fading and the lights of the city were being lit.  The train crossed the fast-flowing river, and headed back out into the country, passing beside the steep and towering cliffs of the Gault Nature Reserve and giving us a beautiful view of the city.

Heading out of Montreal the cityscape was backlit by a beautiful pink sunset.  The train crossed the fast-flowing river, and headed back out into the country, passing beside the steep and towering cliffs of the Gault Nature Reserve.  As we skirted around the empty feeling airport a herd of eight White-tailed Deer lifted their heads from grazing to watch us pass. A Red-tailed Hawk circled above a nearby field, and a Great Blue Heron powered slowly past on its huge wings, reminding us how much nature inhabits our cities. 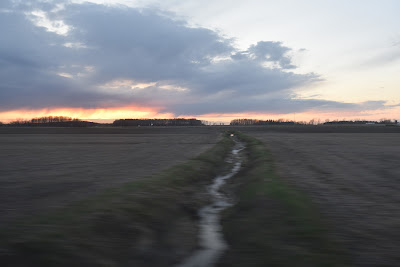 As we made our way through the dark countryside a sliver of a crescent moon appeared briefly in the sky, providing a sense of direction as we flew through the pitch darkness.  Occasionally the lights of a lone house or a small village would break up the inky blackness, or the lights of a solitary transport truck would whizz by on the highway. 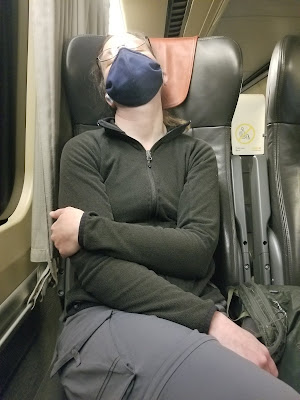 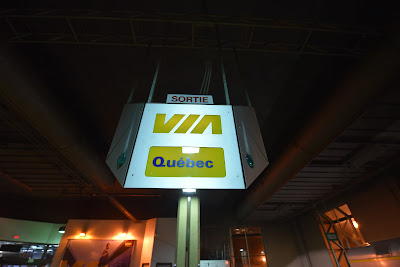 Eventually the darkness gave way to a sea of lights on the outskirts of Quebec City, and suddenly we realized the train was quite high up. We could see the river beside us, and then a blanket of neighborhoods stretching out to the horizon far below.  In the distance we could see the brightly lit parliament buildings perched high atop a hill.  We enjoyed the romance of seeing the cityscape at night, but almost regretted not being able to see more of the landscape. 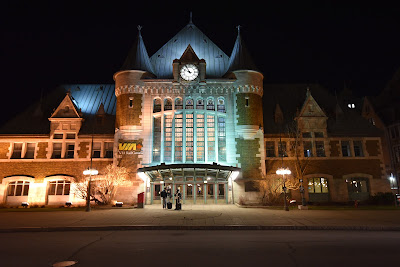 After a 15 hour journey we reached the beautiful old brick train station in Quebec City.  We hurried up the steep and winding streets towards our accommodations in the Old City, hoping to find something to eat along the way.  All the lights in the shops were on, and we felt as though we had arrived in a European town.   It was a photographer's dream come true, but sadly we couldn't linger. 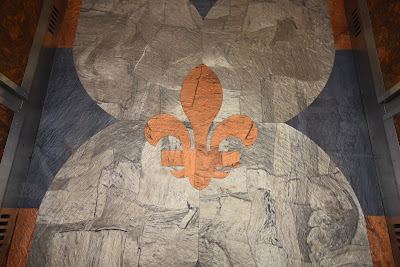 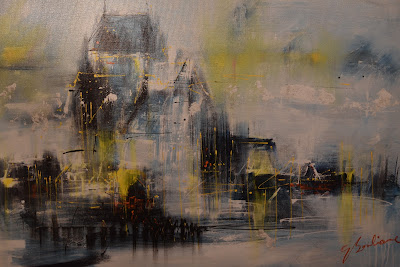 We arrived at a lovely little hotel near Chateau Frontenac and were warmly welcomed in.   It was a wonderful end to a long day.  Hopefully it is also a good beginning to a long and exciting adventure.

Here is to hoping the fourth time is the charm….
Posted by Sonya and Sean at 10:43 AM