As we hike across the country to encourage people to connect to nature through birding, one of our top pieces of advice for anyone interested in learning their birds is to go out with a local expert. Unless you are unusually unlucky, chances are you will learn a lot, have a blast, and make a connection with someone new. Today we decided to take our own advice and go on a guided tour of St. Mary's Ecological Reserve and Important Bird Area with local guide and birding expert Jared Clark from Bird the Rock. This turned out to be a fantastic decision!

We awoke to a light drizzle in St. John's this morning, and after a quick breakfast were picked by Jared. The drive to Cape St. Mary's takes about 2.5 hours, and provides some beautiful views. As we left St. John's the highway took us through a stretch of Boreal forest dominated by white and black spruce, balsam first, and tamarack and dotted with small lakes. We passed Hawk Hills, the highest point on the Avalon Peninsula at 310 m. We also saw areas scraped clean by glaciers, which left behind fields of erratic, scanned upland bogs for signs of birds or caribou, enjoyed panoramic views out over Harricott Bay, and of course marvelled at the eastern hyper-oceanic barrens where Cape St Mary's is located.

We stopped around half way to the reserve for a short break and walk along the Salmon River near St. Catherine 's.   After crossing a picaresque concrete bridge, we took a short stroll down a forested gravel path which gave us some fantastic views of Boreal songbirds. 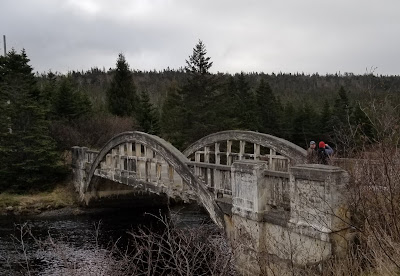 Apparently spring is nearly a month late here this year, and many of the warblers haven't yet returned, but we were nonetheless able to see a Ruby-crowned Kinglet, a Golden-crowned Kinglet, Black-capped Chickadees, Dark-eyed Juncos, an American Robin, and a Common Raven. We also heard a Yellow-rumped Warbler, White-throated Sparrow, Northern Flicker, and a Northern Waterthrush at relatively close range.

Among the highlights was a pair of Boreal Chickadees that hung out in plain view for a while on their way to feed their young. Boreal Chickadees are residents of the Boreal forest, and are highly dependent on black spruce for nesting sites. Preserving Canada's Boreal forest from coast to coast is very important for the continued survival of this endearing species and many others.

Another highlight was several Wilson Snipe that flew by overhead. Their uncoordinated looking flight pattern is a joy to watch, and it was accompanied by a distinctive whinnying sound that Jared informed us was made by their tail feathers! Unlike the Common Snipe, these birds have a double set of long tail feathers, giving them a distinctive sound.

Just before we reached the ecological reserve, the landscape drastically changed. The Eastern hyper-oceanic barrens ecosystem in this region is an extreme oceanic zone, with rolling hills and few trees apart from balsam fir krummholtz. It is open, grassy, rugged, stark, and very beautiful.

When we reached Cape St. Mary's we headed down to the cliffs right away.

Bird Rock is a sea stack in the IBA that is home to a large portion of the nesting sea birds at the site.   The reserve is home to 15,000 breeding pairs of Northern Gannets, one of the most elegant, slick, and beautiful seabirds out there, in my opinion. The sight of the colony, which is the third largest in North America, the most easily accessible, and the most southern, was truly amazing!! Some Gannets were already on eggs, some were still nest building, and a few were mating.

We also enjoyed watching thousands of Black-legged Kitiwakes collecting grass and moss from the cliff-tops and returning it to their mates and nest sites in crevices on the shear cliff faces.

There were also thousands of Common Murre on the cliffs and in the water below, as well as a few members of the most southern group of Thick-billed Murres. We also saw Great Cormorants, Double-crested Cormorants, a group of Black Guillemots, and a couple Razorbill Auks. Without Jared's expertise at locating the less prevalent species among the busy masses this experience would definitely not have been as rich for us.

At the top of the cliffs we were also fortunate enough to see a few Savannah Sparrows and a Horned Lark, and to watch the aerial mating display of a American Pipit as he fluttered up into the air before disappearing over the cliff edge.

As we were enjoying a delicious picnic lunch in the visitor's center, we had a few extra treats. A yearling Red Fox walked past outside the window, pausing to give us all a good view. Shortly afterwards, a Short-eared Owl flew past!! We are really excited to see owls as we cross the country, so this was a fantastic way to kick off our hike.

On the drive back we were lucky enough to see a Canada Jay, a Greater Yellow-legs, couple Barn Swallows, a Bald Eagle, a Common Loon, and a moose from the van.

All in all it was a fantastic day! We would highly recommend a visit to Cape St. Mary's, or a Bird the Rock tour of Newfoundland's birding locations to anyone coming to visit to Newfoundland!