We said goodbye to our temporary home at the Guest House on the Mount and headed to London International Airport to catch our 7:15 am flight to Toronto and beyond. It was with mixed feelings that we headed out - about 1/3 excitement, 1/3 terror, and 1/3 exhaustion. It has been a long road, a huge learning curve, and a LOT of work getting to this point, and it is hard to believe the moment has finally come to take off.  We are so very thankful to all those who have helped us along the way and been part of this journey. 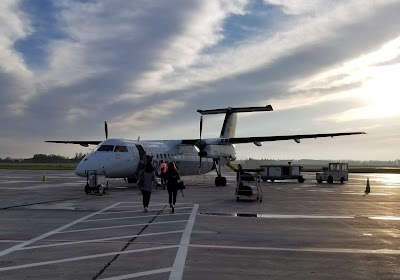 Four hours later we left the London airport on a different plane, after the staff at Air Canada kindly helped us reschedule our flights. I had a seat in row 11, whereas Sean found himself sitting in row 13 on an aircraft with only 12 rows. For anyone who doesn't know him, this is typical of Sean's luck. After being admonished for going to the back of the aircraft when row 13 was a jump seat before row 1, everything was sorted and we got underway.  We are happy to report that the flight from Toronto to St. John's was uneventful. 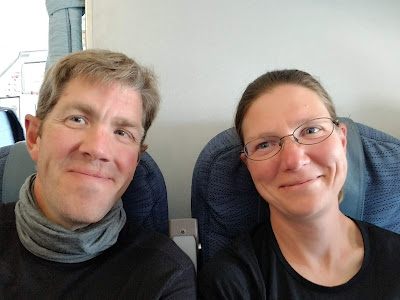 When we reached St. John's around 6:00 PM we were delighted to see a complete absence of snow on the island below us, and equally excited to see several icebergs floating offshore!! These were the first icebergs I've seen in person. It was sunny and warm as we caught a taxi to MUN, where we will be staying until we begin our hike on June 1st.

After checking in we decided to walk downtown to stretch our legs after the flight. We were stunned by a rather sudden drop in temperature, but nevertheless enjoyed our walk down to the harbourfront. We enjoy the colourful jellybean houses, the plentiful and creative streetart, and the many cafes, pubs, and shops featuring local crafts. Unfortunately we didn't pay attention to the fact that today is Sunday, so many things were closed, but we enjoyed the walk nonetheless.  It feels like coming home, at the same time as setting off on a great adventure.  I couldn't ask for more.