Today arrived shrouded in a blanket of mist, giving the city of St John's and the surrounding hills an air of magic and mystery. We headed out after a nice breakfast of coffee, fruit, and toast to see if we could find a replacement for Sean's waterproof pack cover. We were happy to discover that the Outfitters Adventure Experience store in downtown St John had what we needed, as well as pretty much everything else a hiker or camper could need.

After taking care of that relatively minor bit of business we wandered slowly over to the Quidi Vidi Important Bird Area. Quidi Vidi Lake is a long, thin lake that is fed by two fresh water rivers and empties into the ocean. It provides an important resting area for gulls during the fall, winter, and spring when the lake is frozen. The site supports globally significant populations of Herring Gull, Greater Black-backed Gull, Iceland Gull, Glaucous Gull, and Common Black-headed Gull, as well as many other species. 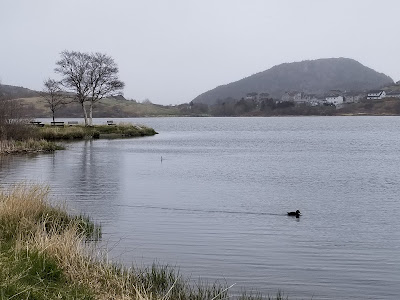 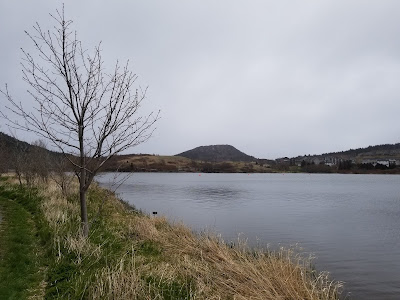 As we walked around the lake we were excited to see three duck species (Mallards, American Black Ducks, and Domestic Mallards), a large flock of gulls, including Ring-billed Gulls, Herring Gulls, and Greater Black-backed Gulls, and a Double-crested Cormorant with an amazing orange beak and lores. One of the highlights of our walk through the IBA was watching an osprey fly low over the water with a large fish it had just caught. The fish was still struggling, sending sprays of water through the air as the osprey gained altitude and was joined by its mate. 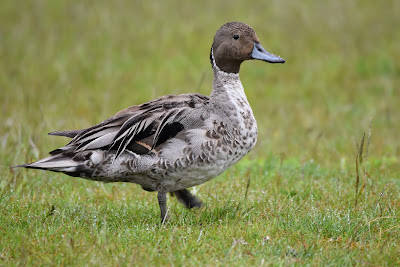 In addition to the gulls and ducks we also observed a number of songbirds, including an American Robin, a Red-winged Blackbird, a small group of Dark-eyed Juncos, and a couple European Starlings. We were also delighted to hear the familiar "Oh sweet Canada, Canada, Canada" call of the White-throated Sparrow. This is one of the iconic species of Canada's Boreal forest, who is a familiar winter visitor to backyards across the country, and whose sweet, clear, whistle reminds many of us of cottages or camping trips in the peaceful, remote, wilderness of the north.

Although we were reminded of remote Boreal forests, Quidi Vidi Lake lies within the city limits of St John's, and is surrounded by a beautiful park, complete with birding platforms, grassy areas, picnic tables and benches, a wide gravel trail used as a jogging path, and a boardwalk. This IBA is very much part of the community, and each time we've visited we've seen many locals out walking with children and dogs, jogging, and simply hanging out.

As we paused to watch the antics of the ospreys, a retired gentleman out for his daily constitutional stopped and struck up a conversation with us. He reported frequently seeing a group of 10 or so Bald Eagles at the lake during the winter months, feeding on fish and the occasional gull. He also mentioned seeing a Snowy Owl in the trees along the shore. As we chatted, and he described some of the military history of the area, we were given a valuable reminder that the places we will visit because they are IBAs are also important for other reasons. The man spoke about the American military base that used to be beside the lake, the ingenuity of the American engineers, and the jobs they brought in, as well as the World Wars, the sacrifices that were made by the previous generations, and the benefits we now sometimes take for granted. We learned a lot from this friendly local, as we hope to continue doing as we cross the country.

After our walk through the IBA we wandered back towards the Signal Hill National Historic Site through Quidi Vidi Village. 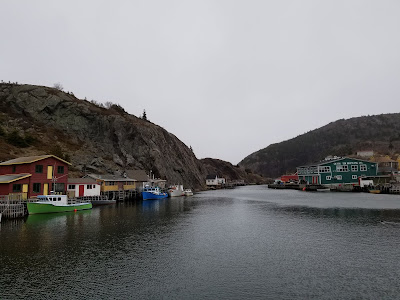 On the way we stopped for a hot chocolate and raspberry chocolate scones at the Battery Cafe, a lovely little place that features live music one night a week. Thus fortified we made our way through the Battery, which is a neighborhood on the edge of The Narrows that we had never explored before. The steep, winding, streets with their brightly coloured houses were fun to explore, and we got a nice view across the harbour towards St John's. This area, together with Fort Waldegrave formed an important part of the defences of St John's harbour during both World Wars.

Finally, we made our way up the steep, rocky path towards Signal Hill. When we stopped to survey the flock of Herring and Black-backed Gulls in George's Pond, with Cabot Tower visible through the mist beyond, we realized the spot provided a nice mix of history and nature. 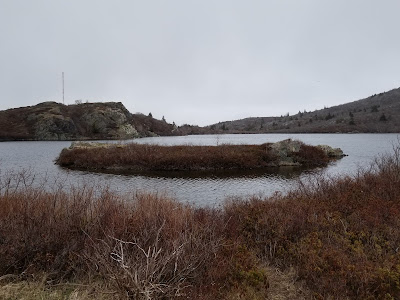 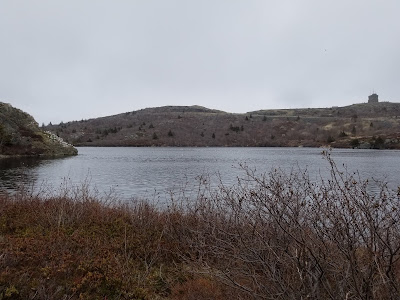 In the days before ship-to-shore radio and satellite communications, signalmen used to keep watch from Cabot Tower, and use different flags to communicate which ships were approaching the harbour. In 1901, Guglielmo Marconi made history at the site when he received the first transatlantic wireless signal there.

When we reached the top of the towering hill, and got a glimpse of the vast Atlantic Ocean beyond, we were super excited to see not one but two icebergs!! One was relatively far out at sea, and partially hidden by mist, but the other was just offshore from Fort Amherst. These are the first icebergs I've been lucky enough to see, and I found them very impressive! 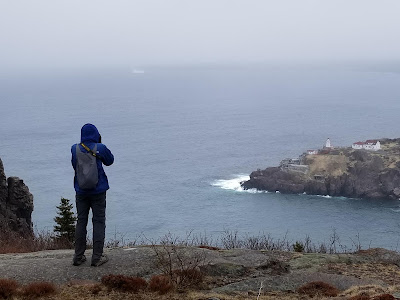 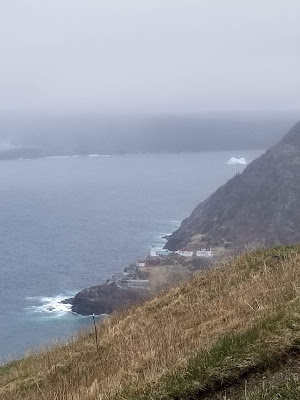 On the way back down through the mist and wind we stopped for another hot chocolate at the Newfoundland Chocolate Cafe, which is just outside the Parks Canada visitor center. It was a good way to warm up after a very satisfying day of hiking and birding around St John's. 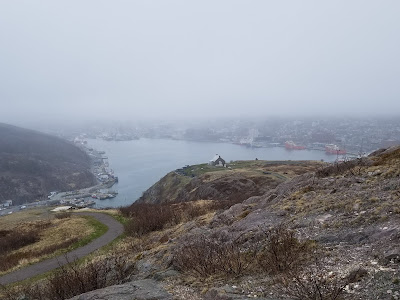 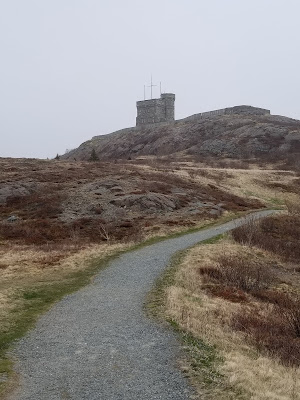