As we walked out of Degelis there was a Bald Eagle circling high overhead, just below the heavy, low hanging clouds. It was being pursued by a hawk, too high up to be identified.

The trail took us through the town, past a lovely little park complete with many wooden play structures and some nice landscaping. No one was out on this cold, grey morning, but it looked well loved. 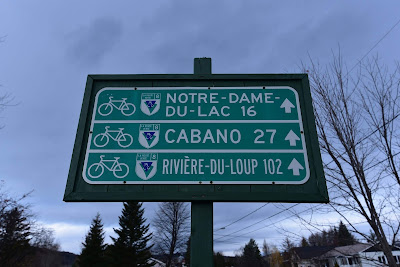 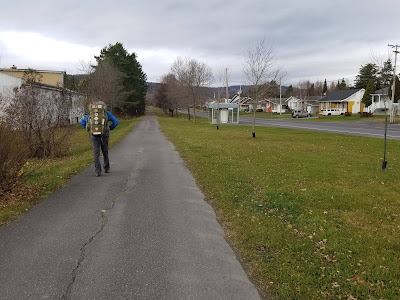 On the far side of town the trail began skirting the edge of Lac Témiscouata. This lake is 5 km wide and 45 km long, and the 135 km long trail we are on, Le Petit Témis, follows the abandoned CN rail line that runs the length of it. 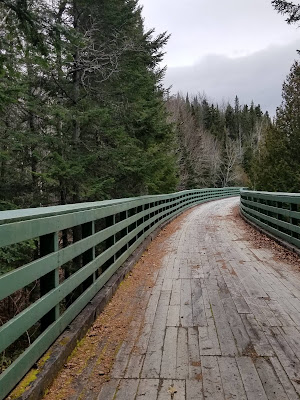 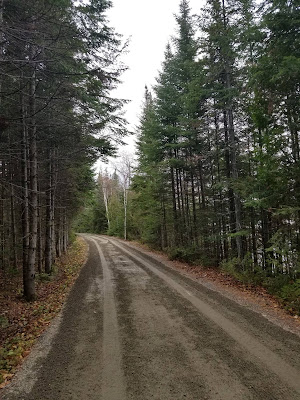 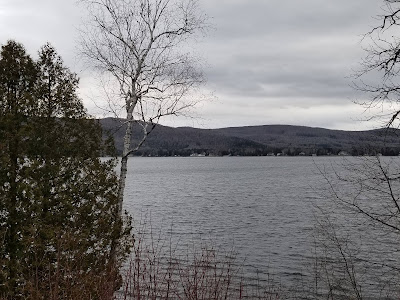 At the southern end of the lake the trail was right on the shore, wedged between the water and a mixed forest. It felt like we were going through wilderness, and every few kilometers there was a lovely picnic shelter and outhouse tucked in among the white birch, trembling aspens, sugar maples, and firs. 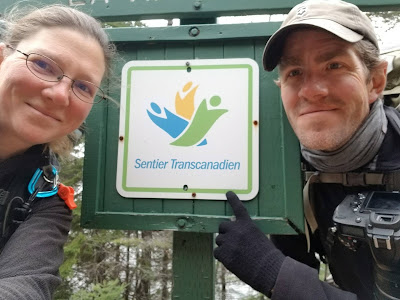 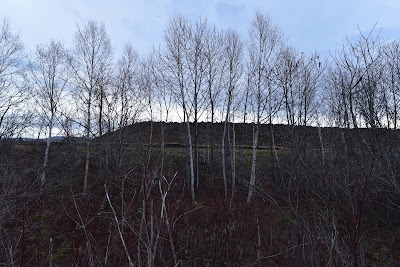 About 3 km in we passed the Motel Claude, which also had a large campground and RV park beside it. The owner was outside working, and he nodded a cheerful hello as we passed. We aren't sure, but we think we picked up a feline follower at this point. 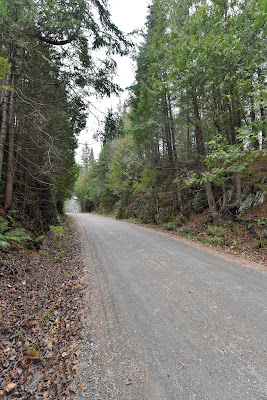 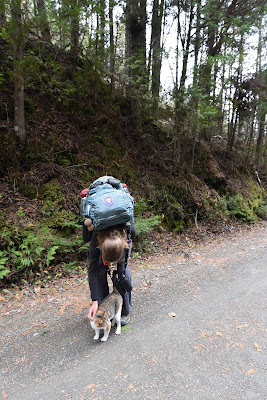 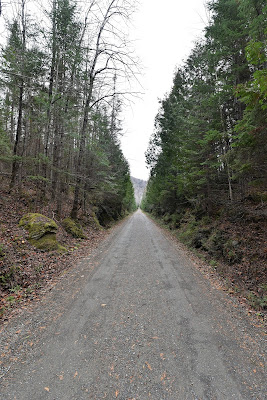 A few minutes later Sean stopped to take a photo and we noticed an orange and white kitten with a white collar trotting after us down the path. We stopped and the cat sped up, started meowing, and put its tail in the air. We stopped to pet her, and then unfortunately she began to follow us. This continued for quite some time before we finally convinced her to turn around and go home. It is always a little heartbreaking to shoo away a friendly animal companion, and we are always left hoping they make it back to their homes okay. This kitten looked well loved and cared for, so hopefully all is well. 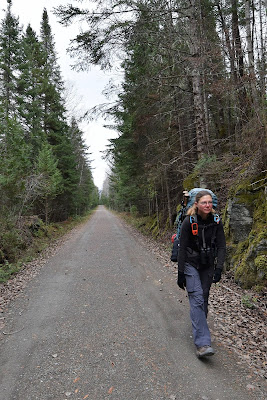 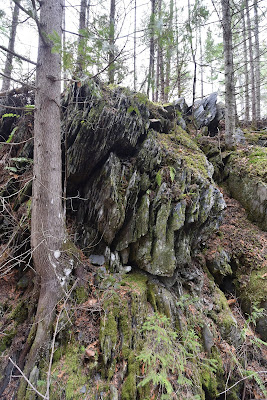 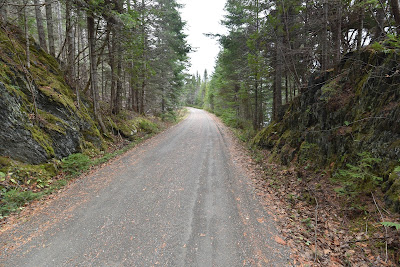 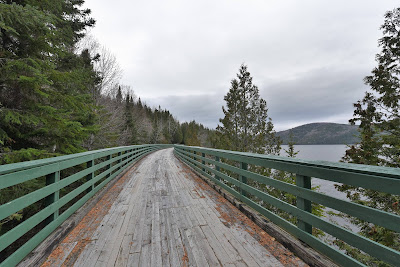 After the this point we passed between a series of tall, mossy, exposed rock cliffs. It felt like we were walking through a tall mossy tunnel. The rock formations looked almost like slate - with slim, sharp, jagged strips of dark grey stone running vertically along the cliff face. The light coloured moss and lichens clinging to their surfaces made interesting patterns. 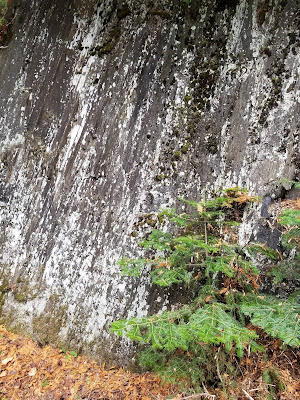 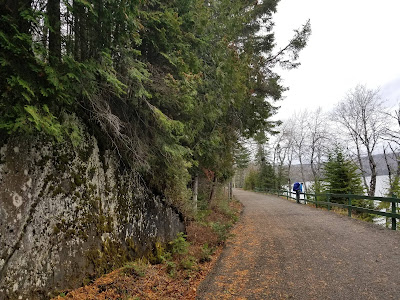 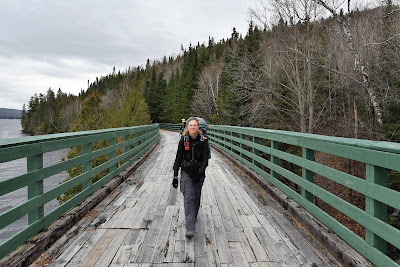 Occasionally there would be a frantic scuffling in the dried leaves on the edges of the trail. Sometimes this would be followed by a loud scolding from a Red Squirrel. The most deeply offended squirrels added a soft whine to the rhythm of their protests. Other squirrels simply sat stock still on their branch, tails curled tightly above their backs, pine cones held tight in their front paws, hoping to remain undetected. 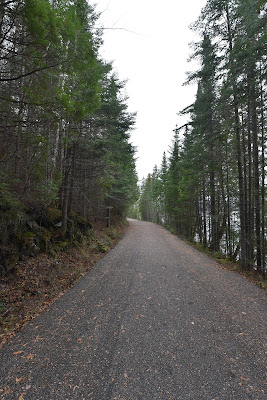 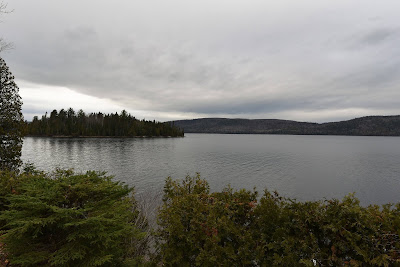 As we continued around the edge of the lake the shore became more developed. It was a mix of small cottages, landscaped RV sites, houses, and a few newly built mansions. Many of these properties had beautiful landscaping, and most had a boat dock. There were fewer places to stop in the more developed section, but it was interesting to see the colourful, creative, and neatly kept properties. 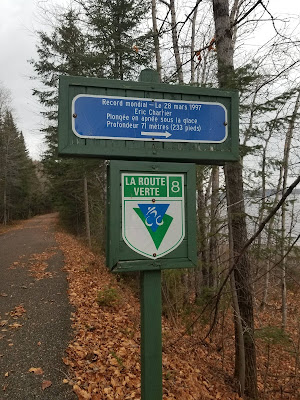 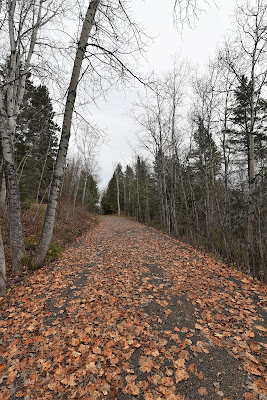 Just before noon we arrived at the marina in the community of Notre-Dame-du-Lac. Although the town seemed to be asleep, with the cafes, auberges, and shops all closed, it was easy to imagine a bustling lakeside community in the summer. The marina had a beautiful beach area, picnic tables and an open grassy space for relaxing, as well as a nice looking restaurant (also closed). There was also a small dock for the ferry that links Notre-Dame-du-Lac to Quai-du-Saint-Juste on the opposite shore of the lake during the summer. In winter the two communities are apparently linked by an ice bridge! 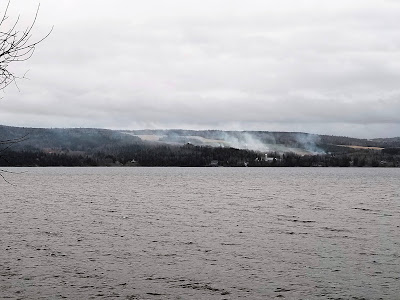 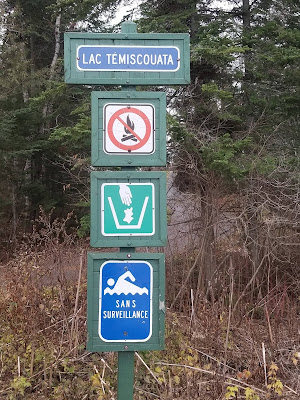 After the town of Notre-Dame-du-Lac the development around the lake gradually became more scarce again, until we felt surrounded by nature once more. It was beautiful and peaceful, although a light but steady rain began to fall, gradually getting us quite wet. 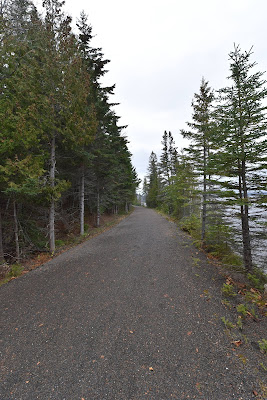 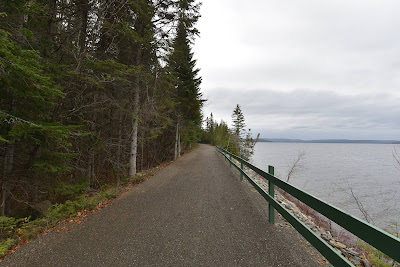 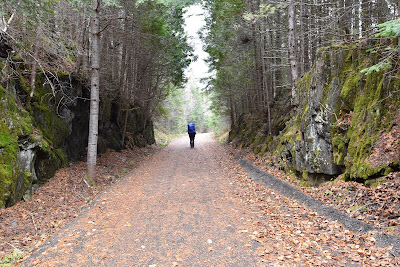 As we walked we spotted two Common Loons fishing in Lac Témiscouata. A bit farther out a flock of Ring-billed Gulls floated in the choppy grey water. A little ways along the trail we scared a large group of Mallards that had been huddling near the shore. The forest birds were mostly quiet, except for not one, not two, but three Ruffed Grouse that erupted out of the shrubs as we passed. Each time we thought we'd been startled for the last time, another grouse took a turn at giving us a heart attack. If these birds stayed still their intricately patterned brown feathers would render them invisible, but instead they opt to scare potential attackers I guess. 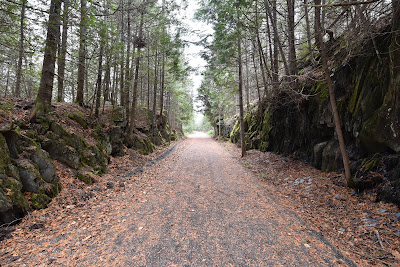 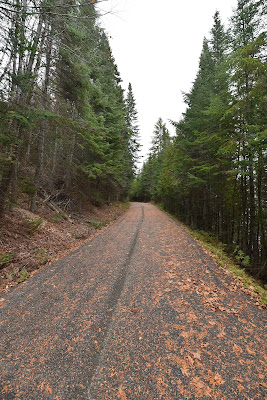 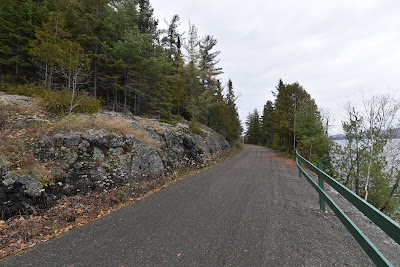 About half an hour before the light disappeared, we reached the edge of Cabanos. As the sounds of the Trans Canada highway grew louder, a very large pulp and paper mill greeted us at the edge of town. Another reminder that forestry is the dominant industry around the Lac Témiscouata region. Cabanos is a larger, busier town, and although it has lots amenities that come in useful to two soggy hikers, we found ourselves missing the peacefulness of the lakeside trail. 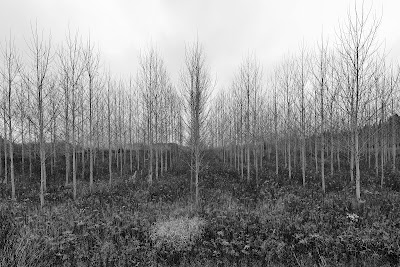