The sky began to turn a pastel pink and yellow, silhouetting the bare tree branches and outshining the stars a full hour earlier this morning as a result of the time change. As we headed out into the cold clear morning there was a thick layer of white frost sparkling on the grasses and fallen leaves. 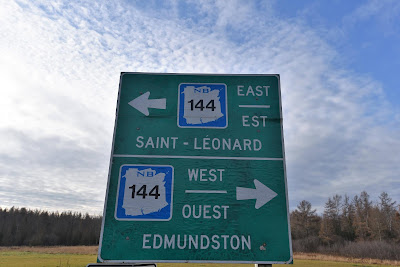 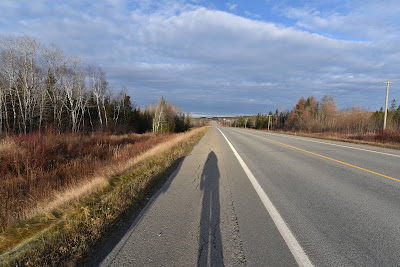 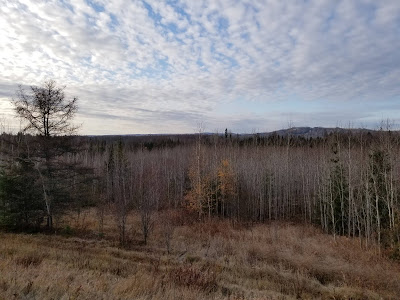 We covered another 32 km of trail, again walking on the shoulder of highway 144 the entire day. Even though it was Sunday, traffic was continuous and moved at a very fast pace, with many cars passing each other to get ahead. 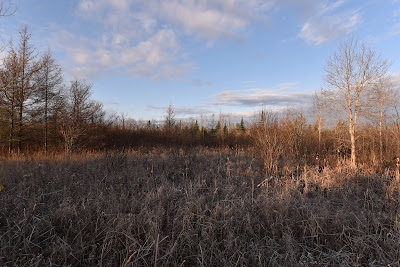 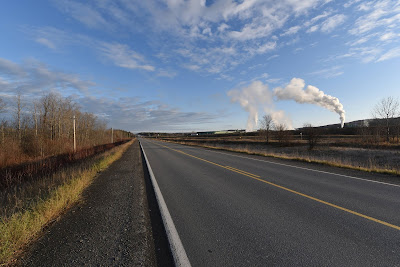 At the edge of Saint Leonard we passed the very large JD Irving Sawmill, which sat there quietly steaming, even on this Sunday morning. Throughout the day we passed many scattered small businesses and houses, farms and barns, all spaced out along the highway, the Saint John River, and the railway tracks.

Across the river we enjoyed seeing the rolling hills of Maine. The deciduous trees are bare, leaving the hills a patchwork of grey and dark green. Every so often a house or cabin would dot the slopes, looking out over the winding river below. If the landscape had been dusted with snow it could have belonged in a Norman Rockwell painting or on a Hallmark Christmas card. 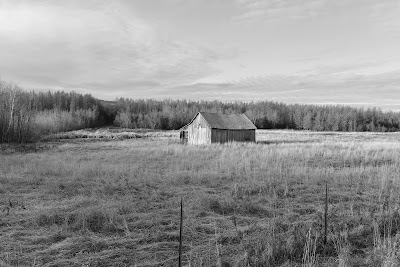 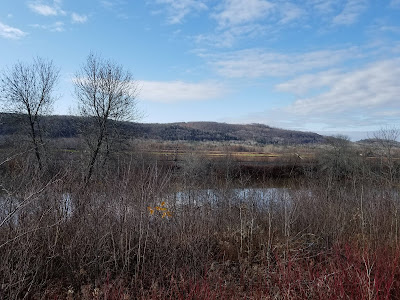 About 10 km into our hike we came to the tiny but beautiful village of Sainte Anne de Madawaska. Nestled in the foothills of the Appalachian mountains, this small community is home to the Sainte Anne Church, whose double steeples can be seen from miles around. The church was built in 1923 in the Romanesque style, and it can seat over 1,000 people. 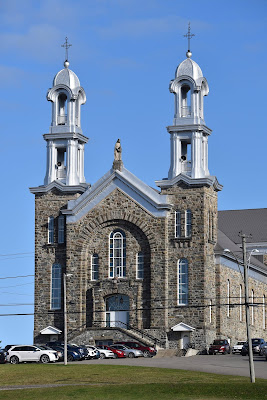 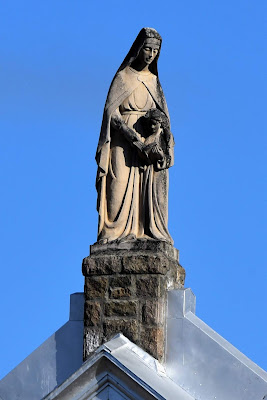 The village of Sainte Anne de Masawaska is also home to a lovely little restaurant called Resto La Bonne Assiette. We enjoyed a delicious breakfast of cheese omelettes, fries, toast, and coffee as well as a break from the chilly wind. Sometimes heaven can be found in the simple things. 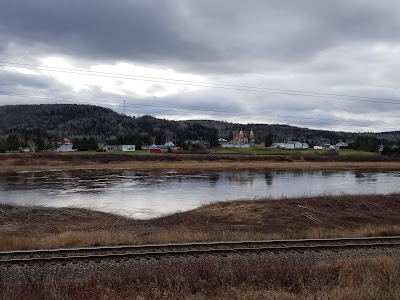 Shortly after breakfast we spotted an interesting, imposing, double-steepled building on the opposite side of the river. We assumed it was a church, and indeed it used to be a Catholic place of worship. Now it is home to the Musee Culturel Du Mont Carmel. This museum is dedicated to the preservation and development of Acadian and Québecois culture and history in the St. John Valley of northern Maine. The museum was founded in 1984 and is operated by the Association culturelle et historique du Mont-Carmel. We had been wondering if the Acadian culture was as strong in Maine as it seems to be here, and I guess this helped answer our question! 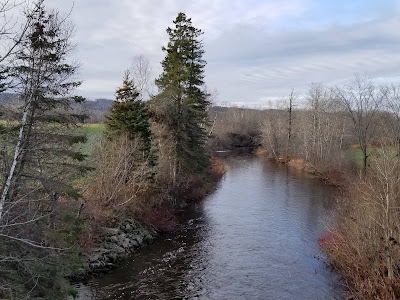 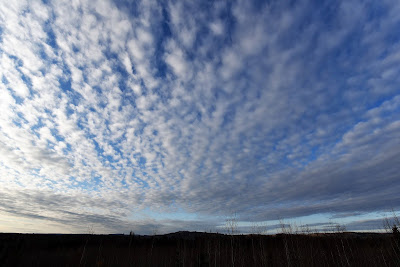 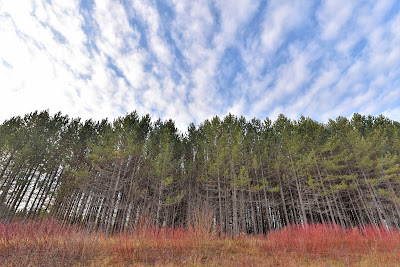 As we continued towards Edmondston we noticed a lot of flooding. Many of the fields were underwater, the grassy slopes disappearing beneath the still water, and the trees poking up through the mirror-like surface. One of these ephemeral ponds was full of Mallards that took flight at our approach. Another was filled with Canada Geese that opted to stay hidden. 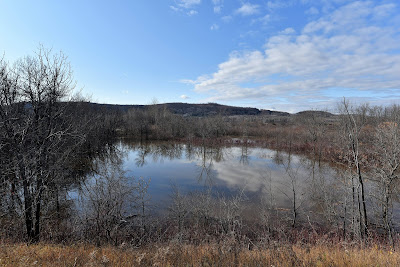 In the afternoon we were startled to see a huge flock of gulls suddenly and almost silently erupt into the air off the Saint John River. Up and up they went spiralling just underneath the low hanging and dark clouds that had gathered. We wondered what had startled them, until we saw a huge Bald Eagle circling around in their midst. 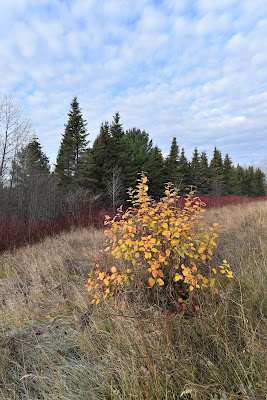 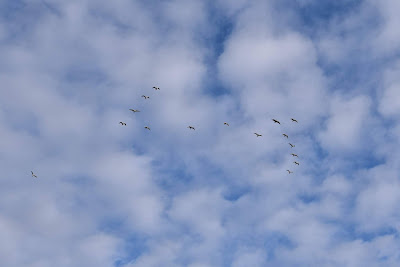 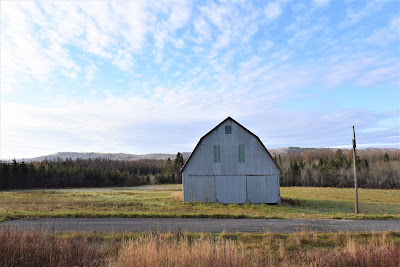 In between the agricultural fields we passed many small groups of white sided houses, each with an arrow straight driveway and a neatly trimmed lawn. Occasionally one of the yards would have a small birch, or a few small shrubs. Some of the houses had covered porches. These small villages gave the area a distinctive character. 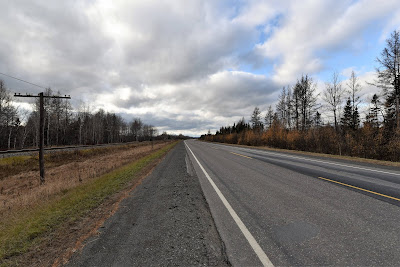 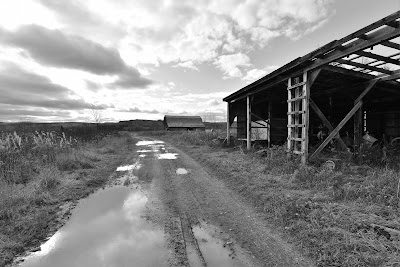 When we came to the village of Riviere- Vert we found a beautiful and very well kept and decorated village. It too had a large Catholic church in its midst. At the edge of town we were delighted to find a small park complete with picnic tables and a tall wooden sculpture of what we assume was a local hero. Walking the edge of the highway can be tiring because there is no opportunity to stop or take a break, so this resting spot was much appreciated. 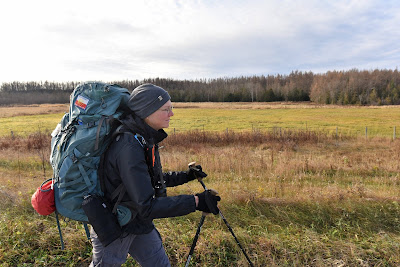 We decided to stop just short of the town of Edmundston for tonight. This may be our last night in the beautiful province of New Brunswick, or we may have one more. Snow is in the forecast for three days from now.  In addition to which we made the classic error of trying to trek too far, too fast in new hiking boots.  Tonight neither of us have much skin left on our feet. Although we keep discussing how much farther it might be possible for us to go before snow flies, it feels like our hike is coming to an end for this season. We are both very saddened by this realization.