ExplorersWeb Article: Trans-Canada Trail Duo Packs It in For Winter

Although Sonya Richmond and her partner Sean Morton no longer have a home to go home to — they sold their house to finance their three-year, 24,000km trek along the new Trans-Canada Trail — the 40-something couple has decided to find a warm hearth somewhere and resume hiking again in the spring.

In just over five months, Richmond, 42 and Morton, 45, covered almost 3,000km from Cape Spear, Newfoundland to Rivière-du-Loup, Quebec. They have eked by on 20 dollars a day, thanks to a basic diet of oatmeal, peanut butter and rice and beans. But now, as winter sets in to eastern Canada, the budget-conscious hikers have found that their equipment is not up to the increasingly harsh conditions. Instead, they will hunker down, try to find paying work and resume their quest for sponsors.

“The challenges of keeping our food and water unfrozen, being unable to stop for breaks during the day without immediately freezing, making camp and cleaning up in the snow and subzero temperatures, and both beginning and ending each day in darkness are too much,” Richmond wrote in their blog.

They have still managed to average approximately 40km a day, despite just seven hours of ever-diminishing daylight, compounded with blizzards and high winds.

For most of their trip, they tried to avoid busy highways in favour of trails and back roads. But winter conditions have caused authorities to close some of those paths to cyclists and hikers. The rural cafes and depanneurs (French for convenience stores) on which they depend for resupplies are also closed or close early in the winter months. 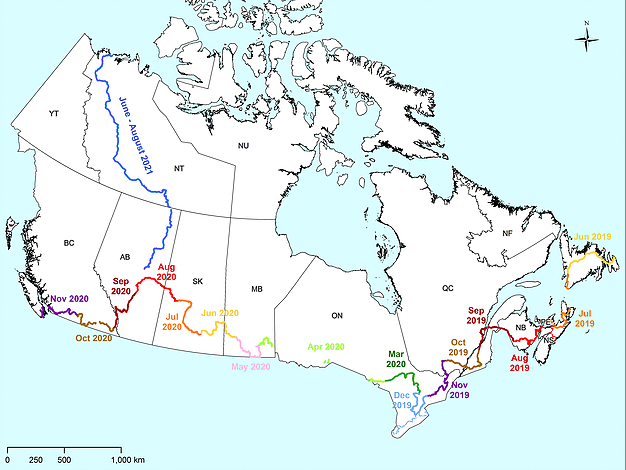 They resume their adventure in spring, 2020. Next year, they hope to walk from Rivière-du-Loup all the way west to milder British Columbia, which they might be able to endure in late fall, and so finish the east-west portion of their trip. Then in summer 2021, they will cover the final, northern section of the Trans-Canada Trail.


Their progress can be found at https://www.comewalkwithus.online/blogger.
Posted by Sonya and Sean at 10:13 AM