When we set out around 8am this morning there was a slight breeze blowing, and the gravel dust trail was shaded by aspen, birch, and maples. Almost as soon as we got underway a friendly jogger stopped to ask where we were headed, and enthusiastically asked for a photo. It gave out stiff selves a welcome boost. 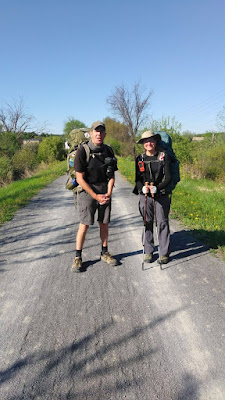 The trail leaving Bell's Corners was immaculate, and perfect for cycling or hiking, which many people were out doing. We passed through forested sections, which were oddly quiet except for the occasional Ovenbird, Wood Thrush, or Red-eyed Vireo song, and we passed between neighborhoods with houses backing onto the trail, where American Goldfinches and Black-capped Chickadees were busily flitting about in the trail-side shrubs. 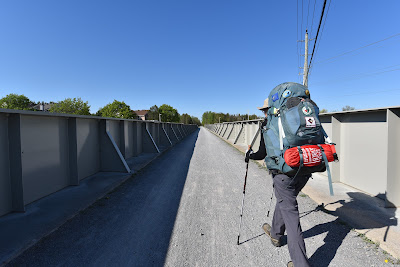 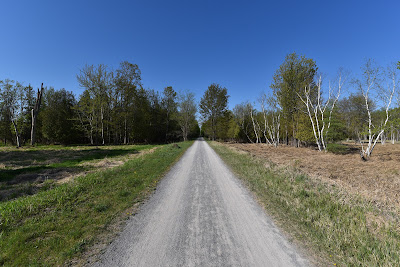 When we reached the Bridal Wood Community we found one of the coolest sets of Trans Canada Trail signs we've seen yet. Amazing artwork and great community spirit! (and I love the number of birds in the picture too!) 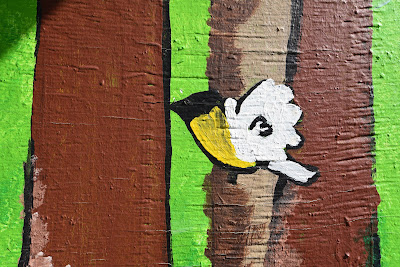 Shortly afterwards we came to the Kemp Woodland, which is an Urban Natural Area that is home to a grove of 200 year old eastern white cedars. The grove is stewarded by students from the Sacred Heart High School's environmental studies class. As we walked under the canopy the morning light was filtering through the cedars. The clear, loud whistle of a White-throated Sparrow rang out, and a Black-and-white Warbler quietly hopped up the trunk of a tree. 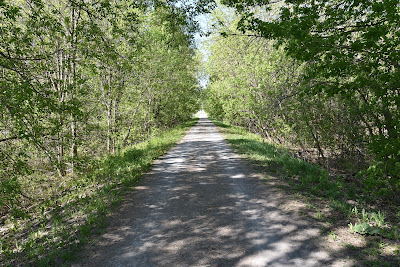 The woodland was named after John Kemp, who was born in 1838 to the Irish settler William Kemp, in what is now Stittsville. He was best known as the builder and owner of Kemp's Tavern, but he was also a railway contractor, and Goulbourn Township Reeve. 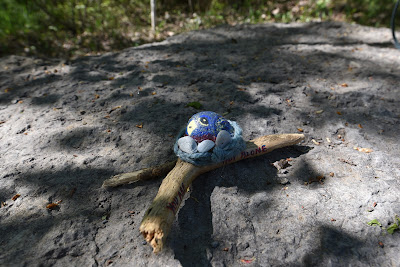 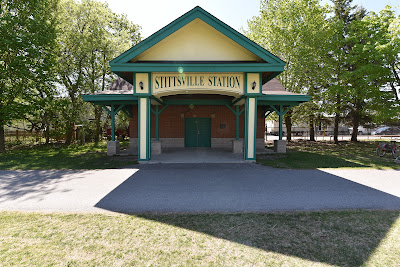 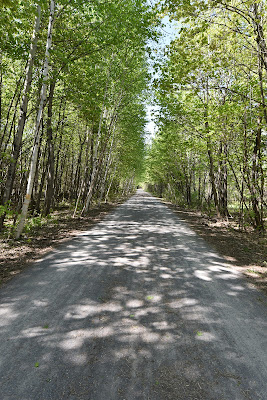 Along this section of trail we also found numerous painted rocks. It was kind of like an Easter egg hunt, with dozens of colourful and creative rocks lining the trail. My very favourite was a rock bird, placed in a knitted nest complete with rock eggs, perched on a branch. How cool is that? 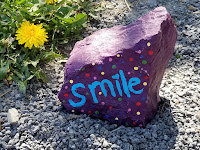 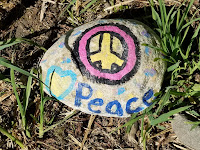 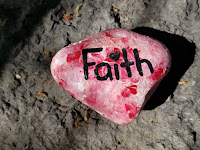 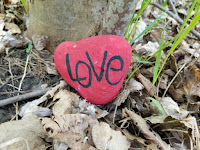 The trail of rock art continued into and through the charming heritage town of Stittsville. We walked through a tasteful central square, with a rustic cabin that normally serves as a farmer's market, the old train station building, and an elaborate wooden kid's climber with a train theme. As we crossed the square a couple rode past on bikes saying 'Welcome to Stittsville!' When they passed us later on we learned they have been following our journey online. An exciting random encounter. 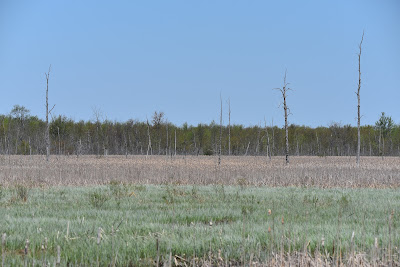 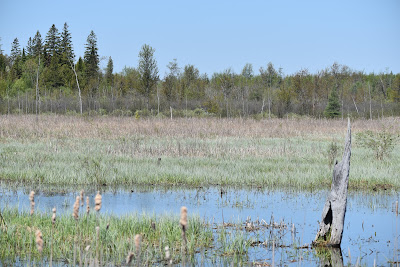 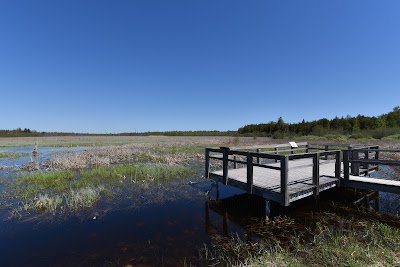 After Stittsville the trail took on a very different feel, as it headed out into cattail marsh. There was a wooden lookout platform providing a great view out into the marsh, where we had the pleasure of meeting a young aspiring nature photographer and his family. It was heartening to see the support this young naturalist has from his family. 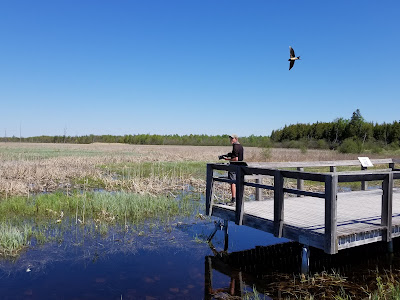 The marsh had not yet fully woken up. The cattails were still a dry silvery blond, rattling in the breeze. The tender green shoots of this year's reeds were just beginning to poke up above the waterline. We spotted a couple of Canada Geese paddling past and the brilliant green of Mallard's heads sticking up among the cattails. The loud calls of Red-winged Blackbirds filled the air, and a Northern Flicker flew into the nearby trees, while a Turkey Vulture circled lazily above. A highlight was watching two pairs of Barn Swallows doing aerial acrobatics above the marsh as they foraged and courted. 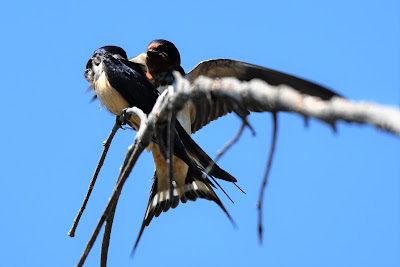 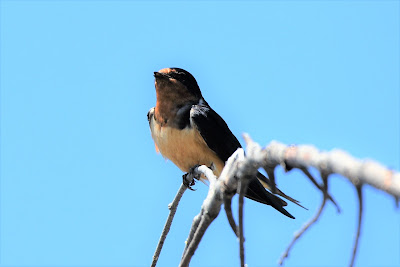 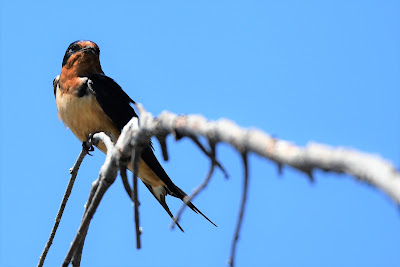 From that point onward the lovely shade of the morning disappeared, and the gravel dust trail was fully exposed. It was another hot sunny day, again without a single cloud in the unusually blue sky. Ten years ago, when I did field work in Algonquin Provincial Park, May was still a bit chilly sometimes, especially at night. It was possible to find patches of snow in shaded cracks. We didn't expect temperatures to be in the high twentys this early in the season, and are carrying our winter gear :( It looks like even warmer temperatures are in store. 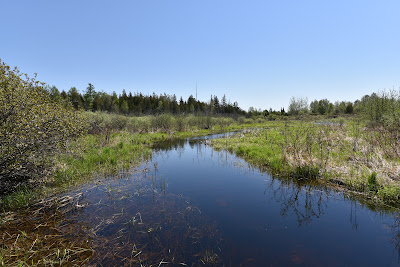 As we continued through the afternoon it felt more like August. Bright yellow dandelions sprinkled the sides of the trail. Large bees and several types of butterflies flitted around us as we walked. Stretches with pine trees gave off the tangy scent of warm pine pitch and hot dust. The only hint of spring was in the swarms of blackflies that are out but not yet ferociously biting. 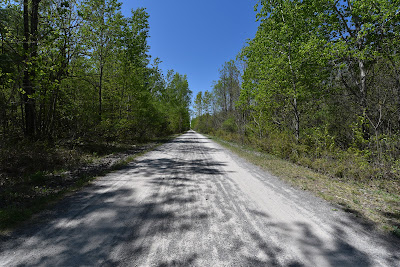 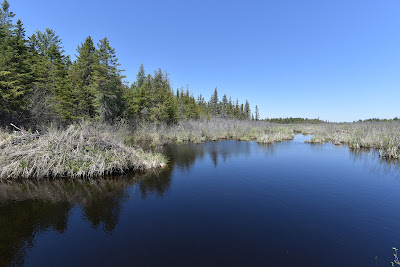 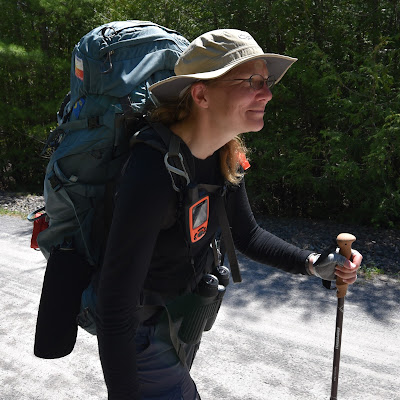 As we walked past the Stittsville firing range the sounds of loud and continuous gunfire range out across the landscape. Not too long after that we passed a golf course, and then crossed under the Trans Canada Highway, where the sounds of traffic became louder. The world may be in turmoil, but civilization is not entirely on pause. 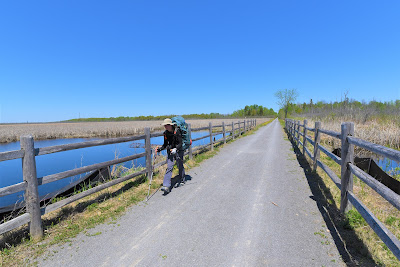 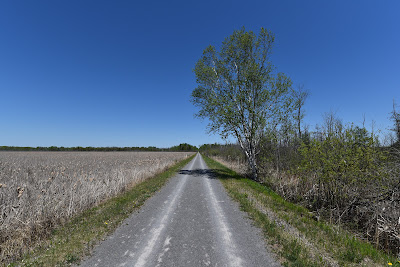 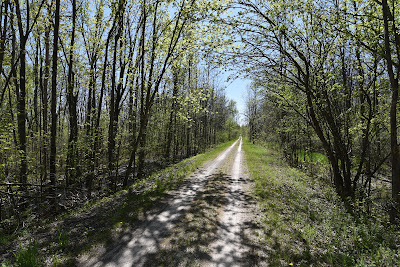 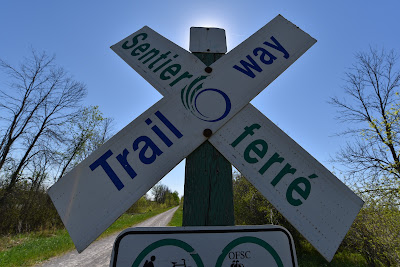 As we've often done in the past, we managed to miscalculate the distance we thought we had to hike today. We ended up walking 32 km. While this isn't a huge distance, we were ill prepared for it on day two of our hike, having done little to no training. Hopefully we can make tomorrow shorter. 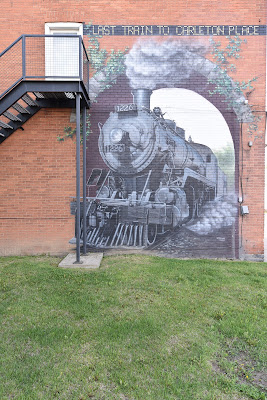