Lost in Lanark: Pt 1 - Beyond Almonte to Somewhere in Lanark County 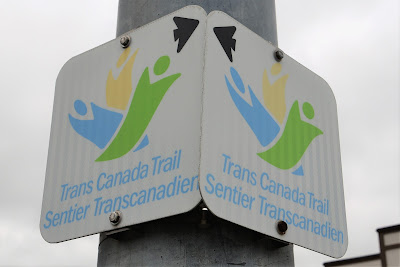 Last night was beautiful and cool, and for the first time this trip we got to lie in our tent and listen to the soothing sound of rain. Shortly after that we got to listen to a short-lived but slightly alarming sounding deluge. We could hear a few of the birds in the surrounding trees fussing and chirping softly, so apparently we weren't the only ones to be woken by the sudden noise.

This morning we had the somewhat less enjoyable task of packing everything up while it was still wet, and then getting soaked shoes and pans in the sodden grass on the way back up to the road. We also discovered that the rain gave the blackflies and mosquitoes a real boost in the night, and they were out with a vengeance. In the end it turned out to be a small price to pay for a lovely, overcast morning that gave our sunburns a much appreciated break from the direct heat of the sun.  Indeed after two days of trekking railtrails most of Sean's face, ears, arms, and legs have taken on a rather unfortunate colouring and begun to peel. I am slightly better off (with the burns limited to my face) owing to the large sunhat, long sleeve shirts, and pants which I wear trekking. Though in both of our cases our shoulders and sides (where our backpacks rest)  have broken out into a bad heat rash. 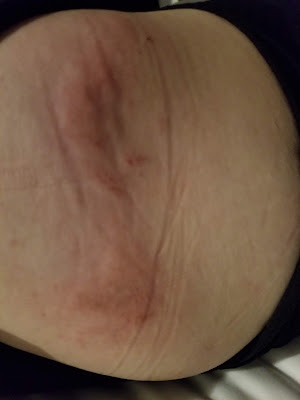 As it turned out, today was a first for us on this hike - we got well and truly lost! We've hiked across four provinces and onto a fifth one without having this happen.  We discovered last night that we've somehow misplaced our main charge cable. Unfortunately, it is the cable that connects our battery pack to the converter that all our electronics plug into. When we discovered this the phone was already almost dead, the Garmin was at about 10% power, and the camera was at about 20%. Not a great situation to be in for navigating! 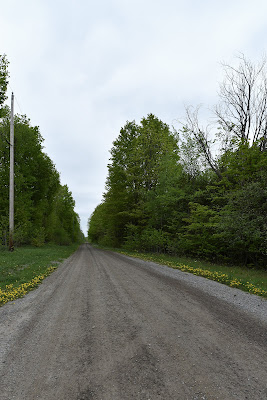 We figured we could simply follow the Great Trail signs, but as so often happens, this proved to be better in theory than reality. We knew we were supposed to follow old Perth Rd. for a while and then turn onto another country road at some point to head towards Lanark. We ended up walking many, many, many, concession roads in Lanark County today, but none of them led to Lanark. Either there was no Great Trail sign at the correct turn, or there was one but we managed to miss it somehow.  After a 35 km day we saw an inviting spot to pitch the tent and decided to call it quits for the day since we were tired, hot, frustrated, and making no useful progress. I think that we can honestly say that we have seen most of Lanark county by foot - just not the parts that we are supposed to have seen. 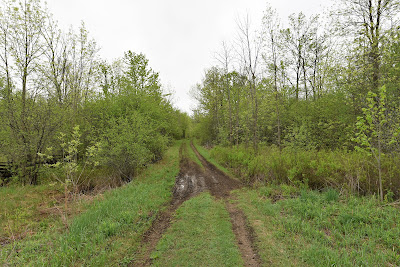 While the most evident benefit of last night's rain was the overcast skies, the precipitation had also wetted down the roads and trails enough to stop the dry dust from blow around in the wind.

In between our misadventures we had a really interesting wildlife day. It began with a porcupine sighting! After walking across the Maritimes and seeing quite a few of these endearing rodents, they have definitely become one of my favourite animals. They are found in a wide range of habitats across North America. They live in dens in rockpiles, caves, fallen logs, and trees. Their flat feet and sharp claws make them excellent climbers, and they tend to stick near trees which they can climb when threatened. Their other defence consists of about 30,000 hollow quills which cover their entire bodies except for their stomachs. The porcupine we spotted was sitting in a tree, munching on new leaves, and watching us. 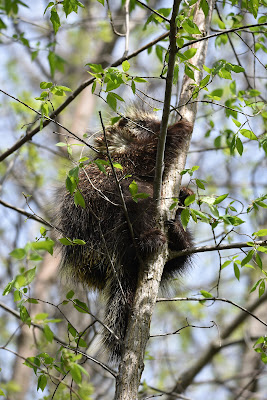 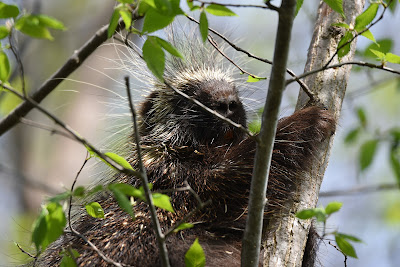 A little farther on we came across the largest Garter Snake we've ever seen, sunning itself on the gravel shoulder. Garter snakes are ovoviviporous, which means they give birth to live young - typically between 20 to 40 per litter, but up to 101 have been recorded! Given it's impressive girth, we wondered if perhaps the magnificent snake we saw might have been pregnant. 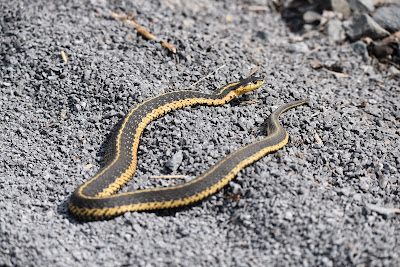 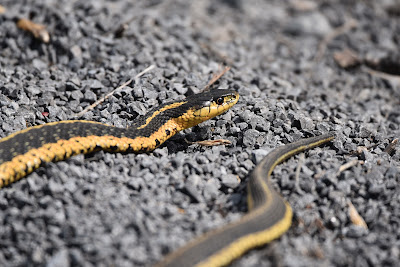 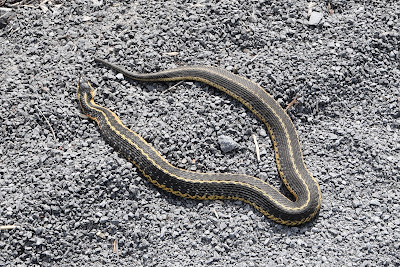 The birds were also very active. American Goldfinches and Yellow Warblers wove in and out of the roadside shrubs. Song Sparrows and Chestnut-sided Warblers also sang from the hedgerows at the edges of fields. Turkey Vultures circled overhead, and at one point we heard the eerie and piercing cry of a Red-tailed Hawk from the top of a tree. A particular highlight was getting a close-up view of a Common Yellowthroat skulking in the roadside bushes with his dashing black mask. 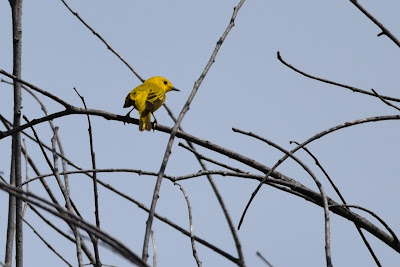 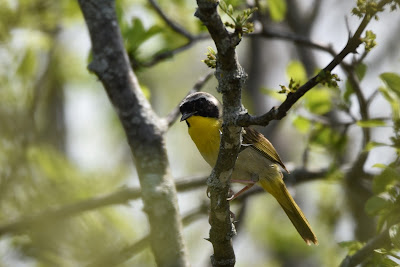 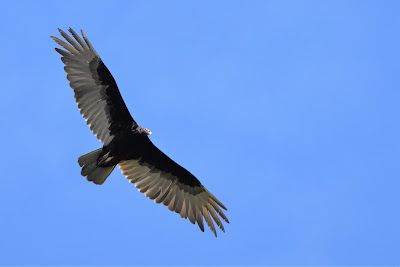 By late afternoon the sun came out from behind the clouds, considerably increasing the temperature. Fortunately however we had been able to cover a lot of ground under the shade of the day's clouds.  By evening we got to enjoy a soft pink sunset. We tried to economize the camera's battery power by only photographing wildlife, so have very little record of this truly beautiful day beyond images of long county roads. 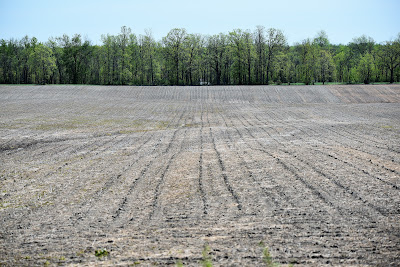 Often life presents some it's most beautiful moments right after something has failed to go the way we expected or planned. It can be challenging to keep an open mind to see the beauty, especially when you are tired or frustrated, but if you can do so, it is often very well worth it. It may be unnerving to fall asleep in the middle of nowhere, but we have everything we need, and we are in a beautiful spot. 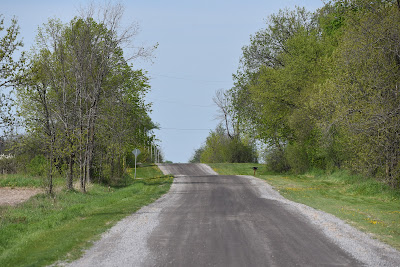