Carleton Place to Beyond Almonte

Today was another gorgeous 'summer's' day. Walking through Carleton Place in the morning light and pleasant temperatures was very peaceful. The community had the feel of many small towns in Ontario, with a main street lined with two-story red brick buildings, the ground floors of which housed a collection of cafes, restaurants, boutiques, and various assorted small businesses. We stopped to enjoy several large murals celebrating the history of the town. 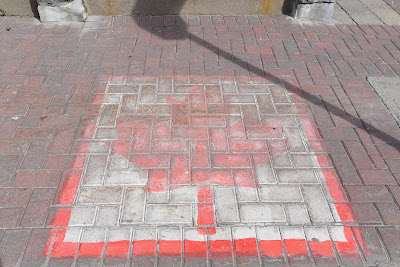 Local plaques tell us that Edmund Morphy arrived in 1819 and eventually built a textile and lumber mill on the Mississippi River. In the late 1800's the town's economy was given a boost by the construction of the railway. It would have been something to see the town in its heyday of industry and railway prosperity. 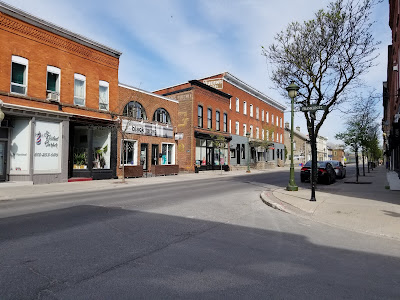 We headed out of town across a pedestrian bridge over the Mississippi River (no relation to the famous river in the United States), which provided a beautiful view down the rapids to the old mill. Since the Great Trail follows a busy highway from Carleton Place to Almonte, and the Ottawa Valley Recreation Trail runs parallel to it, we decided to walk the nice, multi-use, gravel dust trail instead of the more dangerous road shoulder. 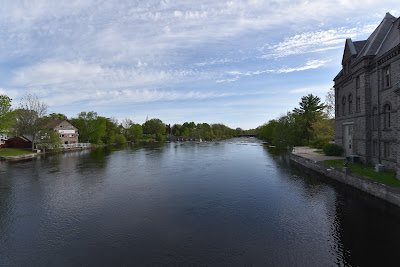 The trail took us through wide-open agricultural areas that were a patchwork of light green hay fields dotted with blooming yellow dandelions, bare brown earth squares, and blond fields of last year's corn stalks. The trail was lined with lilacs that sported huge pink, purple, and white buds. In a few days time this trail will be ablaze with colour and scent. 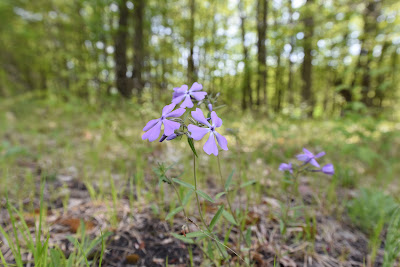 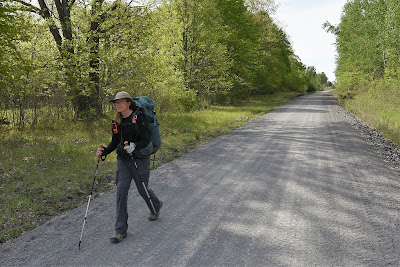 As we hiked we were serenaded by the happy and busy sounds of Song Sparrows, the bouncy 'potato-chip-and-dip' call of American Goldfinches, and the raspy calls of Red-winged Blackbirds. Yellow Warblers and Black-capped Chickadees were also constant companions, and Tree Swallows and Turkey Vultures flew overhead. 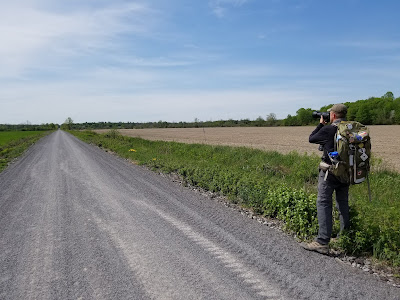 The undisputed bird highlight of the day was finding Bobolinks! Two males were
singing on opposite sides of the trail, periodically flying into the dandelion field beyond. Bobolinks are impressive long-distance migrants, flying around 20,000 km to and from southern South America every year. Over the course of their lives they fly the equivalent of 4-5 times around the Earth! During this journey they literally follow their 'noses.' They can orient by using the Earth's magnetic field, thanks to iron oxide bristles in their nasal cavity, and specialized tissues around their olfactory bulb. During the summer they breed in hay-fields, meadows, and large fields with a mixture of grasses and broad-leaved plants like dandelions. They are the only North American bird to have a light back and dark underside (like a backwards tuxedo). Unfortunately, Boblinks are a Threatened species in Canada, due in part to the loss of prairies and other grassland habitats. They are also susceptible to accidental mortality during hay harvests that occur before they finish nesting. 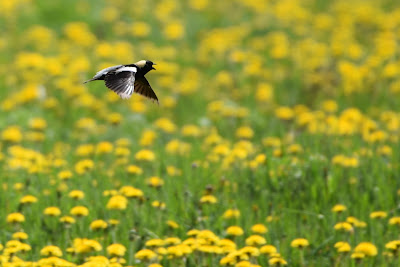 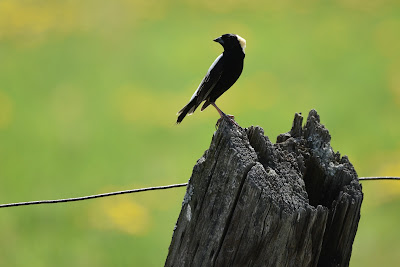 As we approached Almonte we encountered another stretch of rock art on the trailside. A couple saw us taking pictures of the colourful artwork and stopped for a socially distanced chat. They told us that the prevalence of rock art we've been seeing is the result of the 'URock Challenge' issued by two sisters in Brampton, Ontario. They were looking for a way to keep their artistic creativity alive during the Covid 19 lock-down and bring their community together, so they decided to paint rocks and place them on neighbour's porches along with a note. The instructions suggested that the recipient of the rock art paint a rock of their own with a positive message on it and pass it on with the note. Ever since, rock art has been cropping up everywhere, and apparently along the trail near Almonte the rocks are regularly exchanged for new ones! 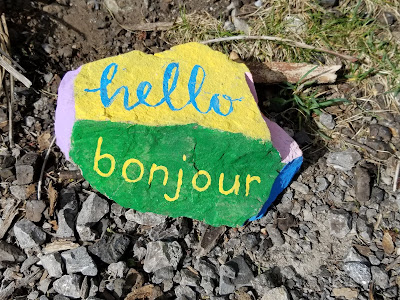 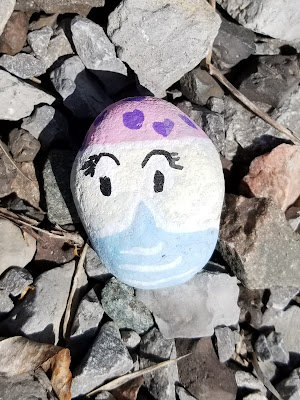 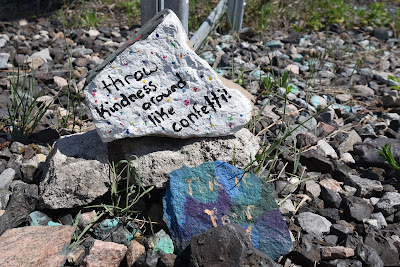 As we hiked we were passed by quite a few ATVs. For the most part they were all extremely polite, slowing way down as they passed to avoid throwing rocks and dust, and giving a small wave. It reminded us fondly of Newfoundland. 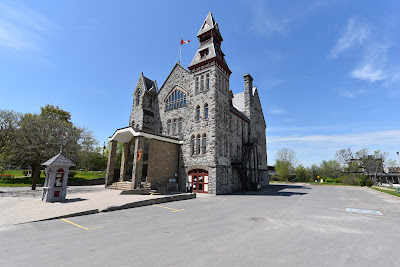 When we reached the charming and busy riverside town of Almonte we discovered that the bridge which the Great Trail would have taken into town was closed for construction. The riverside walk it followed into downtown was also closed due to Covid 19 because it crosses a very narrow bridge where social distancing wouldn't be possible. 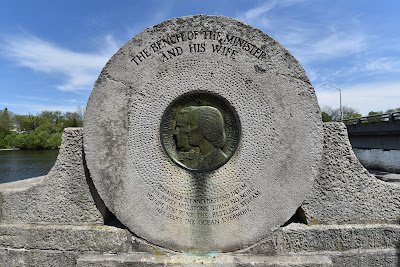 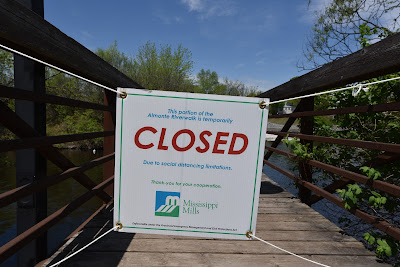 Given the local construction and restrictions we made our way into downtown.  The sidewalks and walkways along the river's edge are lined with stone buildings that have been converted into condos and a power generating station. 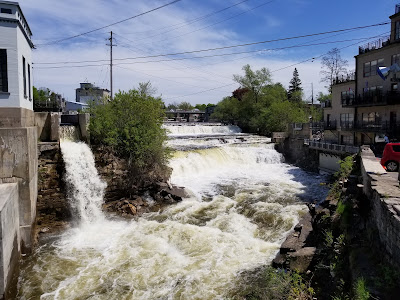 We found a bustling and charming little town with an ice cream stand - The Almonte Ice Cream Shop -  that was open and doing a roaring business. We carefully purchased two ice creams and sat along under a shady tree to enjoy them. 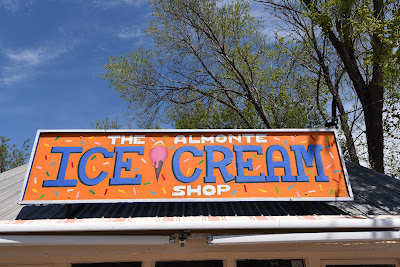 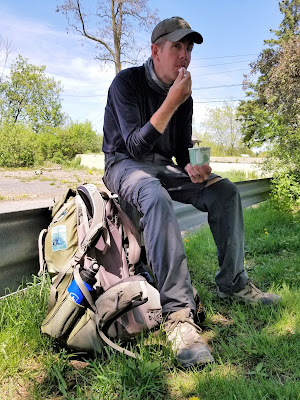 During our walk around town we came across a statue to James Naismith, who was born in Almonte in 1861 and is credited with the invention of basketball. Apparently he invented the game as an indoor sport for young men at the YMCA to play during the winter months using a soccer ball, two peach baskets, and a set of 13 rules. In normal years Almonte has a basketball tournament on their main street during August when 40-50 basketball nets are put up around town. 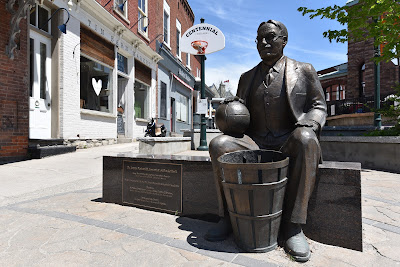 As we headed out of Almonte it was mid-afternoon and the sun was beating down on the shadeless country roads. It felt wonderful to be out in the open countryside, and away from civilization again, but road walking has never been our favourite thing.  We had been fortunate this morning to travel along the Ottawa Recreation Trail which afforded us some coverage, but beyond Almonte we were onto the county roadways on the Lanark Link for the next 80 or so km. We turned down Old Perth Rd on the Great Trail, and after a few hours of hiking we began looking for a spot to camp in the open landscape.  This is rarely an easy task, striving to find a legal place to set up camp which is off anyone's property, which provides coverage and protection, and which is located near water.  Regardless, we soon found a small spot hidden from the view of the roadway, and set up for the night.  It was here, while bedding down for the night that we realized that we have left our battery charger to keep the phone, cameras, and tablet running somewhere in the past 4 days.  This means that until we can find an open electronics store, or order a replacement, were are now living with very limited power to navigate with. 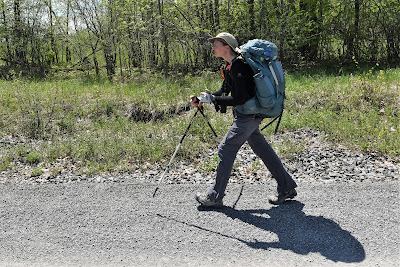 All told we made it about 16 km beyond Almonte before succumbing to the heat and our not-yet-broken-in bodies.  I am not sure that we have ever experienced such heat and humidity so early in the year and so far north.  The temperatures this year are making our first few days out a real challenge. 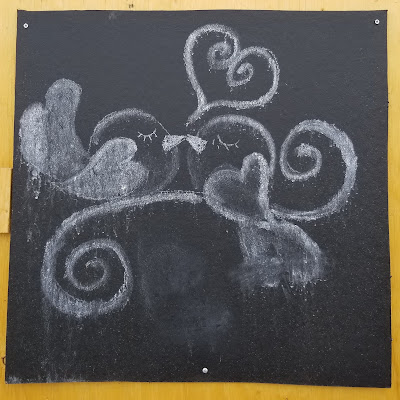