We awoke to the sounds of American Robins, Red-winged Blackbirds, and Song Sparrows singing in the surrounding trees at first light. In the tent it was was already hot, and a look outside the tent confirmed a cloudless sky. We packed up as quickly as possible (which isn't nearly as efficient as it could be yet), and decided to head out early to make as much progress as we could before the heat really set in. 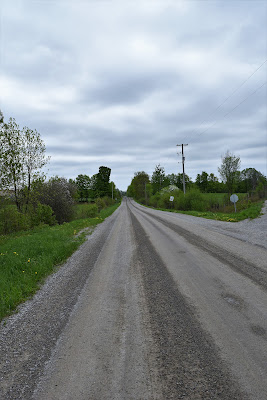 Armed with new energy and determination we headed in what we hoped was the direction of Perth, where we would try to rejoin the Great Trail. The rising heat and complete lack of shade on the country roads made it tough going from the start, but we soon discovered it was turtle hatching day! 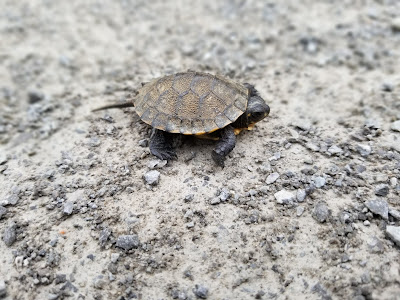 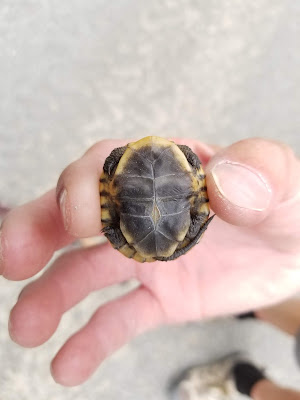 In a very short space of time we found two hatchling turtles! Each one was about the size of a townie, but we think they were two different species - a baby Snapping Turtle and a baby Midland Painted Turtle. We happy to report that both hatchlings were rescued from the backing roadway and moved out of harm's way well onto the shoulder in the direction that they were heading. 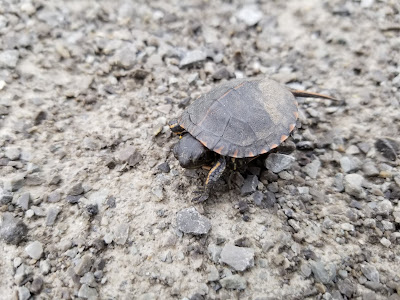 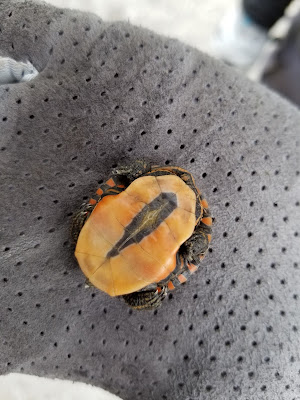 Around mid-morning we passed a lady who was out jogging, and from a safe distance asked her for directions. She told us we were now closer to Smiths Falls than to Perth, and then very kindly and patiently gave us directions - which Sean promised he understood and then promptly forgot. It was so hot by then we decided to give up looking for the official Great Trail, which follows these country roads anyway, and simply head, as best as we could for Smith's Falls. 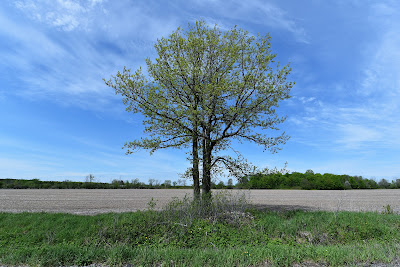 We hiked past fields with split rail fences, as well as old fields and small woodlots. The flute-like melodies of Wood Thrush, the loud 'teacher-teacher-teacher' call of Ovenbirds, the musical notes of Black-throated Green Warblers, and the buzzy sounds of Black-throated Blue Warblers floated out of the cool, shady, deciduous woods we passed. It was very tempting to join them under the cooling shade of the canopy.

Other sections of roadway were lined with eastern white cedars, and punctuated with beautiful cattail marshes. The light reeds with their fluffy tops were reflected in the still, dark water of the small pools. In these areas the calls of Common Yellowthroats, Yellow Warblers, Great Crested Flycatchers, and Red-winged Blackbirds filled the air. Common Grackles were frantically flying back and forth with large beakfulls of insects for the nestlings. A few frogs occasionally called. 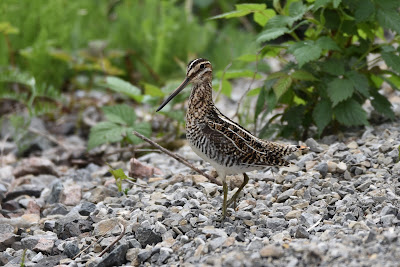 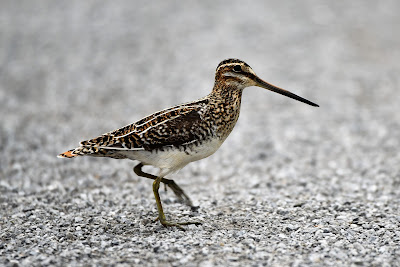 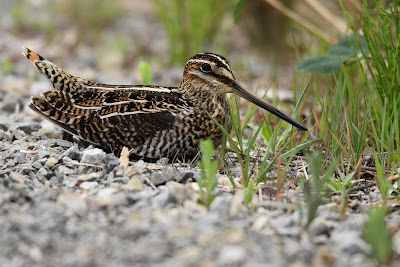 Our birding highlight for the day came at one of these roadside cattail marshes. A Wilson's Snipe, sitting atop a small snag, emitting its loud, persistent cries! These endearing, plump, long-billed birds are among the most widespread shorebirds in North America. They can be found in wet, marshy areas, including bogs, fens, alder and willow swamps, wet meadows, and along rivers and ponds. Wilson's Snipes use their flexible bills to probe for invertebrate prey deep in the soil, and can swallow smaller morsels without having to pull their bills up. Snipes emit a unique "winnowing" sound when they fly which is produced by their tail feathers. The Wilson's Snipe we met on the edge of the marsh came right up to us, calling, and shuffling down into the gravel. It was a very exciting encounter. 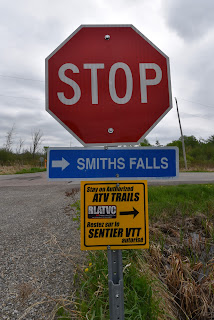 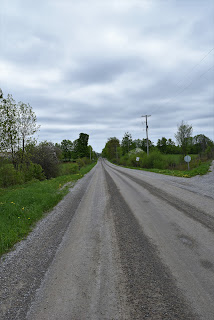 By mid-afternoon the heat was pretty oppressive, especially walking along the side of paved and gravel roads in the full and blinding sun.  Owing to the heat and humidity we took a break for several hours in the shade of the single tree that we could find until later in the afternoon.  Then around 4 or 5 pm, about the time we would normally be slowing down to find a place to camp for the evening, we continued on. Ultimately we got to Smith Falls around 9pm after hiking for just over 40 km and just as the sun was setting. 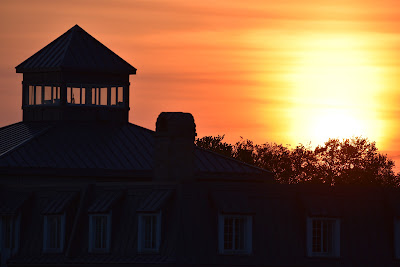 We were very glad to make it into Smiths Falls to take a much needed break. We have three online presentations scheduled for the coming days which will require a WiFi connection, and we need to find a way to replace our charge cable, so we will be spending a few days here in Smiths Falls to rest and recover. We are also taking the opportunity to switch out some of our winter gear which is heavy, hot, and clearly unnecessary at this point.   The possibility also exists for us to switch to our "prairie plan" and simply switch our backpacks for the hiking cart which we have purchased for trekking with more gear across the central sections of Canada. 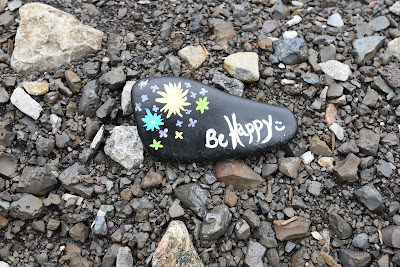