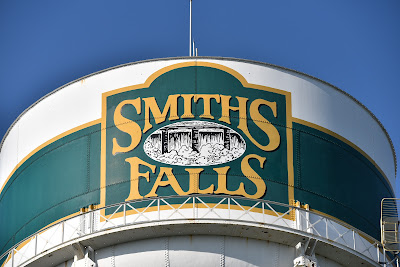 We are spending the next couple days here in Smiths Falls, giving a couple online presentations, recuperating, waiting to switch out our winter gear, and replacing our charge cable. It feels a bit like a step backwards to make a stop so early in this year's hike, but we feel it is necessary. When we got in yesterday evening and reconnected to the internet we discovered that the area is under a heat alert, with a humidex of 37°C. Even apart from our other logistical challenges, now is definitely not the time to be hiking hot country roads with heavy winter gear, risking heat stroke. 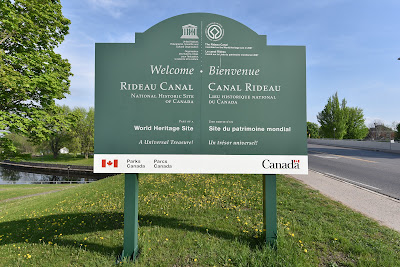 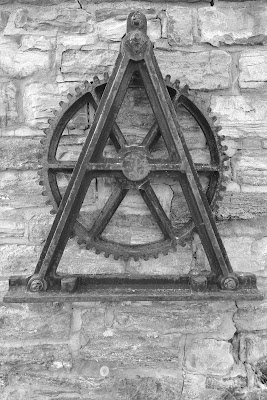 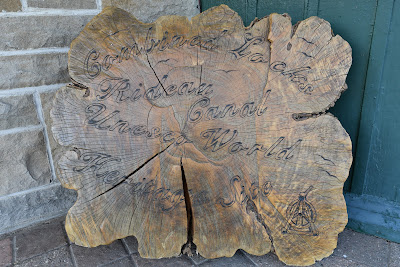 The main street in Smiths Falls is currently under construction, but it is nonetheless easy to see that this is a town with a rich history and a beautiful waterfront. It is situated on the Rideau Canal, within the town there are four sets of locks in three different locations. Together these locks provide a total of 15 meters of lift for watercraft travelling the canal. 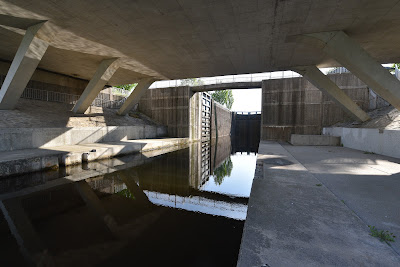 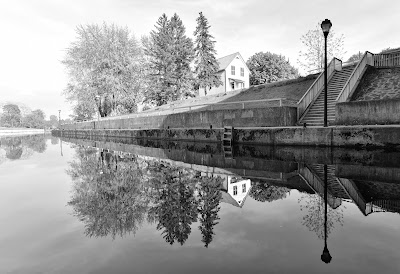 Much of the land bordering the Rideau Canal is a grassy park with pathways, gazebos, fountains, artwork, monuments, and maples that provide beautiful shade. It seems the local kids come down to the Canal to jump off the locks and go for a swim, and adults spend their evenings fishing off the sides. 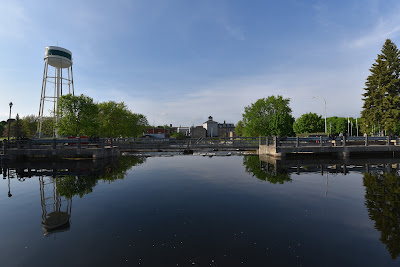 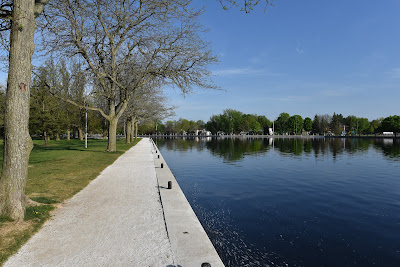 The waterfront isn't busy, and we were able to sit by ourselves under the cool shade of a tree and watch the Mute Swans and a family of Mallards lazily paddling around in the water. Iridescent European Starlings and an Eastern Kingbird also provided entertainment as they took splashy baths among the rocks at the water's edge. 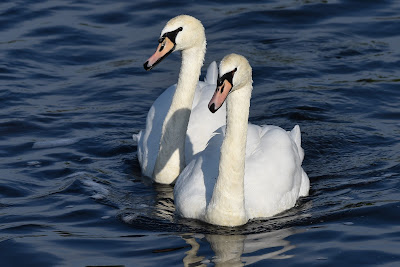 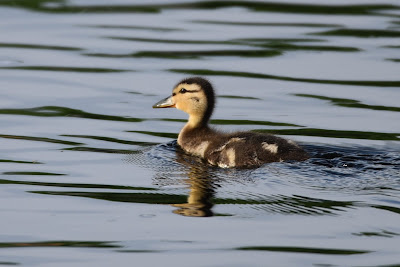 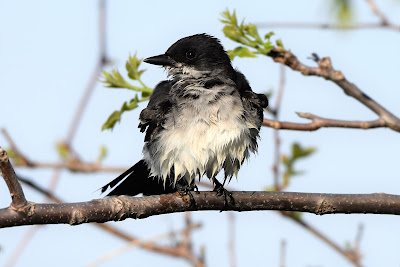 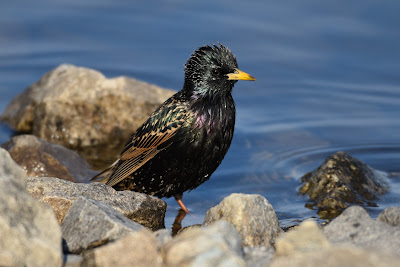 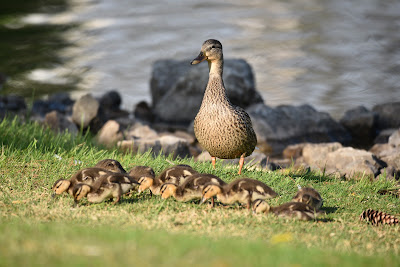 Sadly, as we sat enjoying the afternoon we were reminded of how important the lessons are that we teach our children. There was a grandfather out fishing with his daughter and grandson on the opposite shore, and he suddenly took his lawn chair and began repeatedly slamming it down in the water, killing a large and beautifully coloured Northern Watersnake.   Afterwards the older gentleman seemed to take a great deal of pride in telling everyone who passed by that he had killed a snake.  He held it up, swung it around, had people take pictures of him with it, and eventually just dropped the body in the water again.  The young boy who was with him seemed torn between being 'proud' that his grandfather had done something 'seemingly great' and being very upset that the snake was dead.  He ran around the park trying to talk to people, and whether because of social distancing or being unsure of what to say or do, most families walked away.  Regardless, I'm sure the behaviour will stay with the young boy.

As we walked out of the park, the grandfather was on his cell phone telling city officials that they 'had to clean up the snakes in the region' and kept yelling to people in the park to 'stay away because 'there were snakes that could kill people in the area'.  While I doubt that the city did in fact tell this individual to kill more snakes, it is nonetheless a sad understanding of species and their contributions to our world and communities. As a point of fact, nine of Ontario's seventeen snake species are found in this region, and none of them are harmful to humans. They are a valuable part of our ecosystems, and all of them are suffering from loss of habitat, road mortality, and persecution from humans. It was very sad to see this last threat in action.

With all of that said, I do also have to relate that upon being informed of this incident the local Municipal officials expressed their concern and have begun to discussing ways in which they might address the matter including the possibility of putting out information plaques (featuring the photographs of local photographers) detailing the diversity of the region's natural wonders!  A great means to transform an unfortunate matter into a forward thinking development. 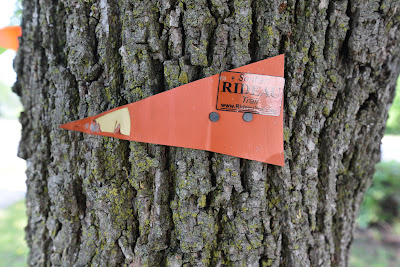 The Rideau Canal was not the only geographical feature that made Smiths Falls an important transportation hub in the late 1800's and early 1900's. It also sits at the crux of several major railway lines, giving it direct rail access to Toronto, Ottawa, Montreal, Brockville, Napanee, and Arnprior.

During World War II, Axis prisoners were transported by train through Smiths Falls to POW camps across the country. A German soldier, Oberleutnant Franz von Werra, jumped the train near Smiths Falls and was apparently the only POW to successfully escape in North America and return to his homeland. His story was made famous in the book and movie 'The One That Got Away.' 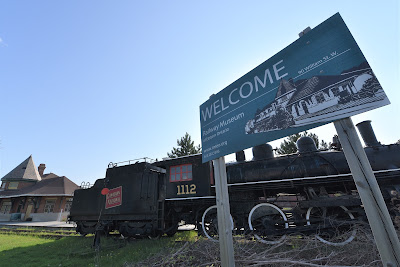 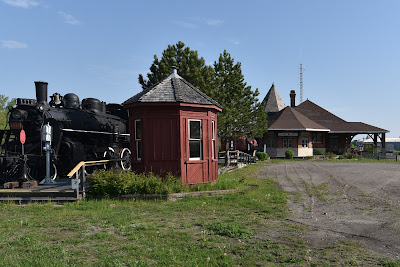 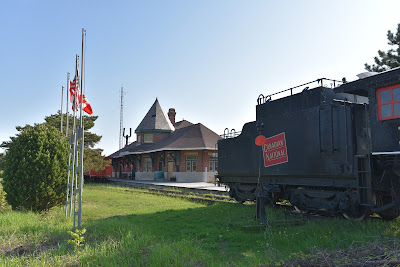 The history of the railway can be seen in murals around town and in the Railway Museum of Eastern Ontario, which is located on the Great Trail, in the old CN rail station. Sadly, it closed at the moment. The railway station and the nearby railway Bascule bridge are both National Historic Sites of Canada.

A bascule bridge, more commonly known as a drawbridge or lift bridge, is a bridge with a moveable span that is operated using a counterweight. TheScherzer Rolling Lift bascule bridge in Smiths Falls, which was designed by the American engineer William Scherzer, combines the traditional counterweight of a bascule bridge with a unique rolling lift motion that eliminates friction. It was but in 1912-1913 to carry the Canadian Northern Railway main line across the Rideau Canal.

It is an area rich in history. As we sit in the evening air, watching the Tree Swallows catching flies over the canal, a thin crescent moon rise, and the sun set in a beautiful, soft, pink sky we try to imagine what it was once like in its heyday.