When we woke up this morning it was cold and the skies were overcast.  We knew there was rain in the forecast, but we didn't know how much or when it was due to arrive, and we didn't have cell service in the valley to check the predictions.  We've long since learned that forecasts are often less than precise, so we try not to rely on them too heavily, and instead to wait and see what the day (or night) brings.  So when we packed up our campsite and began the 2 km climb up out of the valley to the front gate of Buffalo Pound Provincial Park we did so with some apprehension under the darkening and cloudy skies of the early morning. 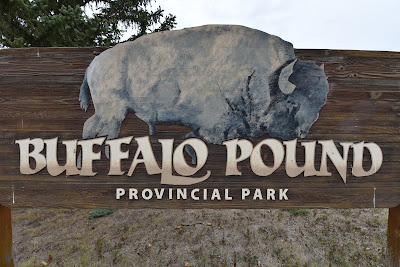 Buffalo Pound Provincial Park is over 1930 hectares in size, and is centered around Buffalo Lake, a water body created 10,000 years ago when the glacier retreated.  It was established in 1963, and its name refers to the method of hunting bison used by the Indigenous People of the Plains, who used the contours of the land to create natural corrals or 'buffalo pounds.' 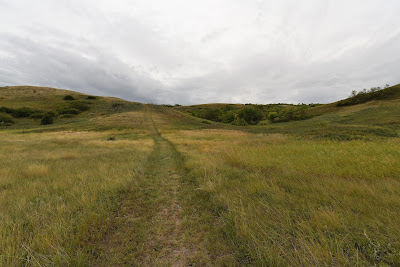 When we had finally huffed and puffed our way up to the rim of the valley on a wonderfully paved roadway we turned around to see a very large bank of dark and angry looking storm clouds rapidly approaching.  We stopped at the main gate, and debating whether to attempt our planned 50 km trek westward through the Sun Valley section.  Deciding against all odds to push onward we ventured out of the park and down the roadway.  As we did so the rain began. 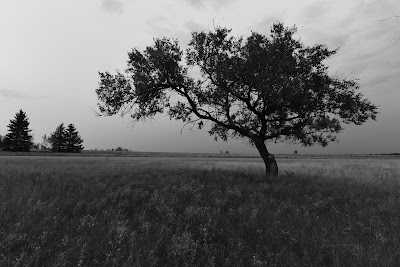 By 9 am we were damp.  By 10 am we were wet.  By 11 we were soaked – and then the rain really began to come down.  Given the rain we were unable to step into the fields of mud to get out of the way of the vehicles travelling by and so – by no fault of their own – we ended up being washed with wave after wave of water as they passed us.  There was no stopping to take pictures there was only trying to push forward.

After a couple of hours of miserable trekking we reached the turn that would take us to the Sun Valley section of the Trans Canada Trail.  Once again we began to worry as there were no TCT signs to indicate that this was indeed the pathway. Adding to the challenge of being wet and trekking amid a strong westerly wind we turned off the paved roadway and quickly discovered that this part of the route was neither ash vault nor gravel…instead it was pure mud.   As such it was in this manner that we began our hour and a half of pushing and pulling ourselves through the deluge and mud that presented itself.

By noon we were again in the Qu’Appelle valley and found that what he ranger in Buffalo Pound said of the trail here was correct.  The pathway has been cut off from thru traffic and rather than being able to continue forward we again found ourselves looking across a small piece of private property with no way to bridge the gap.  Once again the Trans Canada Trail was broken and we had to backtrack.  Without being able to cross this 50 feet it would take us between 10 and 16 km to get back onto the main trail.   If ever there was a moment to cry this was it.  Soaked through, covered in mud, exhausted and cold we now faced having to retrace our steps at least 8 km south in the rain to the first available roadway.

We re-walked a concession southward and there, standing in the pouring rain we huddled to keep the phone dry to plan how to reroute around our third trail break in 3 days.  Then, minutes into our scrolling, zooming, and googling of options the phone winked off….it turns out that we had forgotten to charge it last night and the damp day had taken its toll on the old battery.  As such, uncertain of the region and not knowing our way forward (concessions here are not the organized system of predictable 1 mile boxes that we have come to rely upon) we set out along the way back to Buffalo Pound Provincial Park which we knew to have camp sites and warm showers available.  And so drenched and dispirited and we headed first south then east again as our carts continued to sick into the roadway, our wheels got thicker with mud, and our shoes got heavier with each step 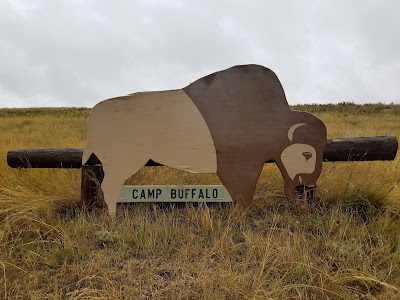 When we arrived back the Saskatchewan Park Staff were incredibly kind, and booked us into a nearby campsite for the night.  We walked down the snaking paved road to the lake shore.  The surface of the water was a dark slate grey, and whipped up into choppy waves by the wind.  It was raining so hard that we decided to take shelter under the overhang of the building which housed the park interpreters' office.  We had a view of the sandy beach, a large blow-up bouncy castle floating in the water, the heated swimming pool, and at the far end of the parking lot we could just see the mini golf course and store.  Here we changed our of our wet gear in the washrooms, took warm showers and waited out the afternoon showers for a period with less rain to set up our tent up during.

Ultimately we ended up spending several hours huddled under the overhang as it rained and rained and rained.  We watched a group of Ring-billed and Franklin's Gulls standing on the beach, and a large flock of Tree Swallows wheeling and diving above the hills, playing in the wind and rain.  It was very damp and cold and at one point the park interpreters brought us two hot chocolates from Tim Horton's, and offered us a couple of lawn chairs.  As far as they knew we were just two hobos squatting on their doorstep, which made us appreciate their kindness and incredible generosity even more.  These two Park’s Staff are clearly wonderful souls!

Around 5 pm the rain finally let up a little and we ventured out to set up our tent.  Once we were settled in we discovered that we had trekked 39 km to end up a mere 4.5 km away from last night’s campsite. 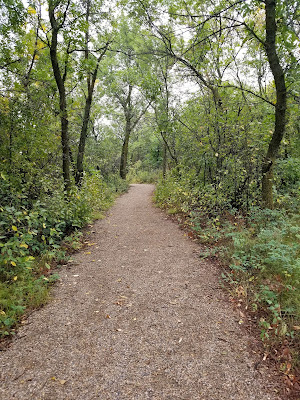 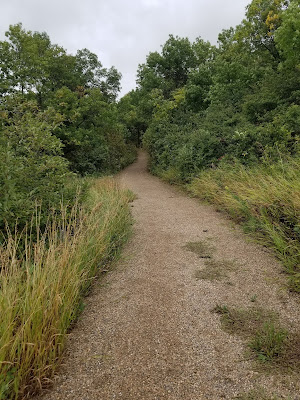 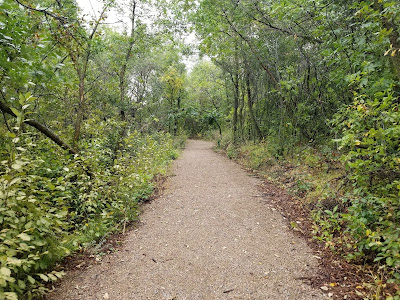 By 7 pm the rain had stopped and the sun had come out, and so we walked along a lovely, wide, crushed stone dust trail that wound along the shore of the lake to the campgrounds at the far end of the park.  This scenic trail, which wound over grassy hills and through forested tunnels was also part of the Trans Canada Trail and a spur that wove through the park.  We stopped for a hot coffee at the Convenience Store, and sat outside among the flower boxes on the patio to enjoy them. 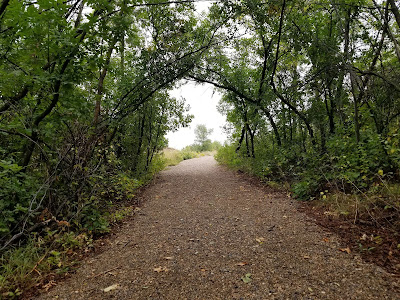 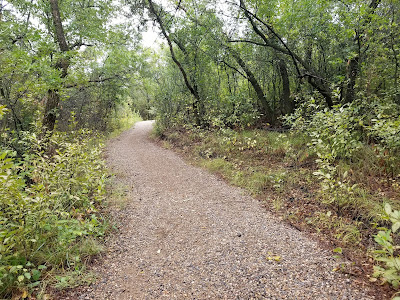 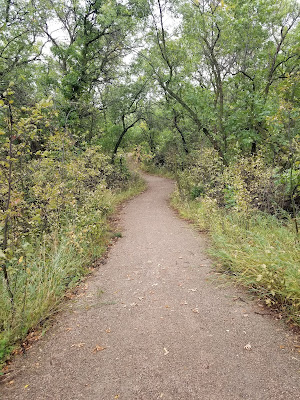 It never fails to amaze us how a day can begin one day, go in a certain direction and then end entirely different than one might have expected.

The best I can make of today’s situation is that despite our best laid plans and hopes, the world ultimately will force you to slow down. In recent weeks – owing to the length of the days and distances between communities our pace had shifted from our usual meandering tempo of 25 km per day to an average of more than 50 km per day.  As a result we had begun to remap the coming two months of the TCT through September and October becoming more and more focused on covering kilometers and were we might conclude when winter settled in at the end of the 2021 hiking season.  But over the past three days conditions have reminded us of the hubris of over-planning and over-reaching.

This trek was never about getting to Vancouver or Tuktoyaktuk by a certain date it was about exploring Canada.  Ultimately as with every hike and in life it isn’t supposed to be a race - it’s the journey not the destination that matters.  So it is time to start trekking day by day once again. 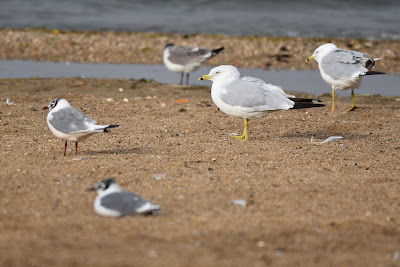 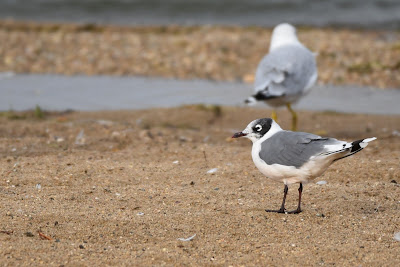 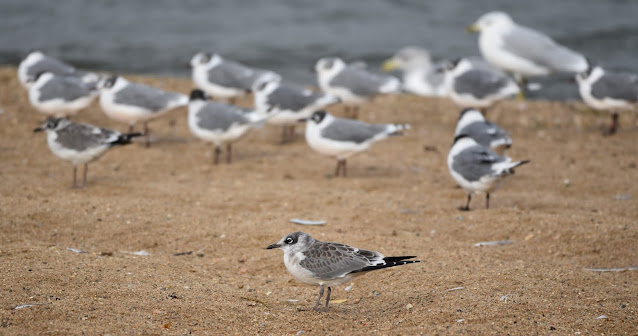 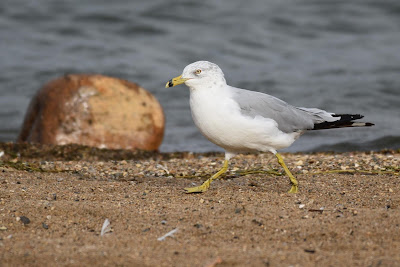 As evening came the sun began to fight its way through the clouds, setting the sky ablaze as it set.  A very large group of American Crows gathered on the hills above our tent, creating quite a lot of noise.  Once again, as we fall asleep we can hear the sound of our neighbor's campfire, the sounds of other campers around us, and in the distance the familiar yipping and howling of coyotes.  We hadn't intended to be here at Buffalo Pound Provincial Park for another evening but sometimes weather and circumstances force us to slow down and enjoy the place we're in. Tomorrow we will continue on to Moose Jaw.