A Wet Walk around the Bay : Echo Bay to Sault Ste Marie

Well, we didn't get evicted from the rest area last night, and we were even joined by a camper van that arrived in the parking lot around 2:30 am. However, it was anything but a restful night. Bands of thunderstorms rolled through like freight trains, bringing torrential rain with them. Water dripped through the roof of the tent, soaking our sleeping bags, and letting us know that our fly is reaching the end of its life after 5,000 km on the trail. Although we were disappointed with the fly, the floor of the tent more than made up for it when we realized we had pitched the tent too close to the marsh, and it was now sitting in about 4 inches of water - as were our backpacks and shoes.  When we pushed on the floor there were little waves of water under it - an ankle deep puddle. However, none of that small lake came in, so at least that was something.


We finally decided to get up at 6 am when it started to get light, packed up our sodden gear, and made ourselves a breakfast of jam, bread, and tea at the picnic table in front of the loonie monument. The sky was still very dark, and we could tell more rain was imminent. 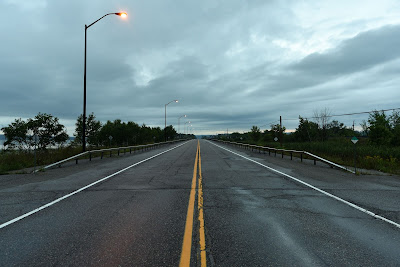 As we set out down Highway 17b once again on this dark, rainy, Sunday morning there wasn't any traffic. As we crossed the bridge over Lake George the far shore was lost in mist, and a few Mallards, Canada Geese, and Common Mergansers floated among the shrubs and trees on the near shore. 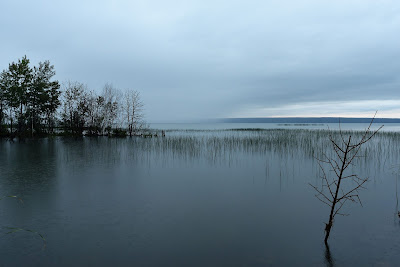 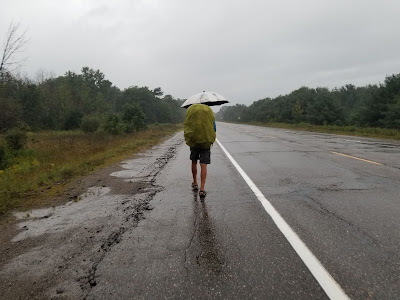 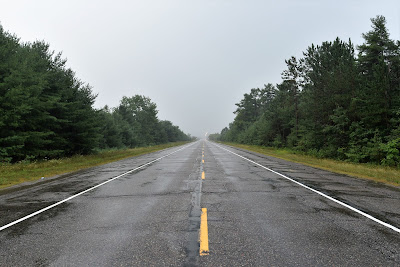 A few minutes into our hike the skies opened up and the rain began to pelt down again. We pulled out our sun umbrellas, and to our delight they seemed to function very well as regular umbrellas as well. This was a relief, because it was too hot to make wearing rain gear comfortable, but there was too much rain not to protect ourselves. 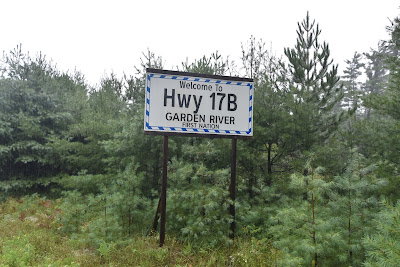 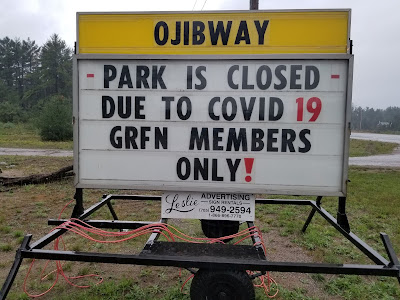 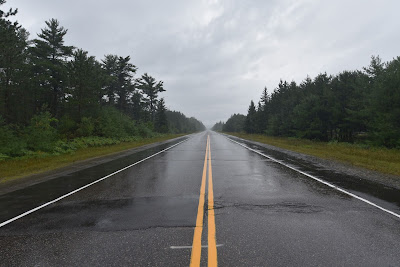 Soon we entered the Garden River Indian Reserve No. 14. The Garden River First Nation, which is also known as Gitigaan-ziibi Anishinaabe, is an Ojibwe band. This Reserve was created as part of the Robinson Huron Treaty of 1850, which was signed by Chief Shingwauk. It has two parts which are geographically separated, but both are located along the St. Mary River.

The highway was bordered by trees and tall white pines. Small homes were occasionally nestled in among the trees. There were a few spots where it might have been possible to camp, but without foreknowledge we had no way of knowing this. Eventually we passed the Ojibwe Tent and Trailer Park, which is where we had originally intended to camp, before we learned it was closed to outsiders as a result of Covis 19. It looked like a beautiful campground, with sites nestled among tall pines on the water. 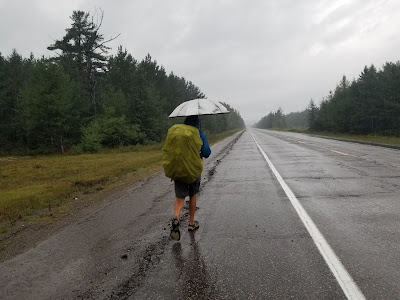 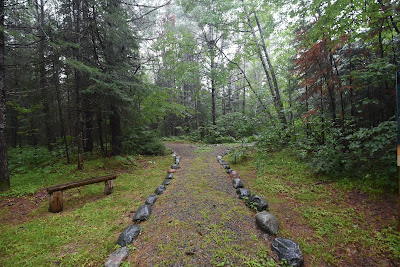 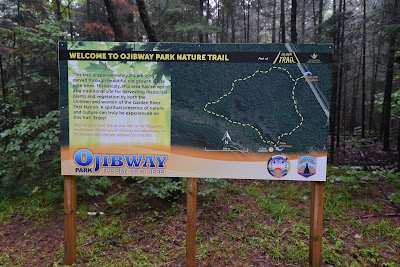 A short distance past the entrance to the park we unexpectedly came across the Ojibway Park Nature Trail. This 2 km loop side trail was part of the Great Trail, and it consisted of an emerald green moss covered pathway that ran underneath a tall canopy of old growth white pines. The area was traditionally used by the women and children of the Garden River First Nation as a place to gather medicinal plants and vegetation. The place felt peaceful and magical, but it was extremely dark, and it was raining very hard, even under the dense tree canopy. 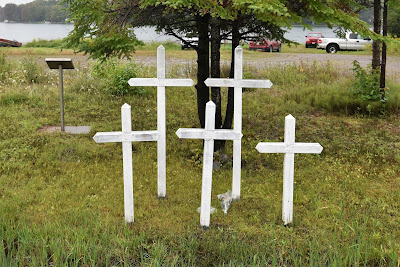 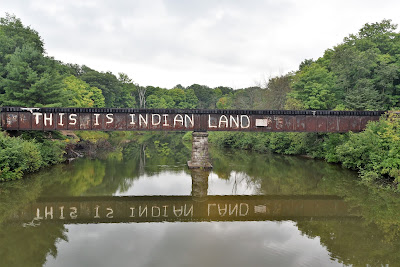 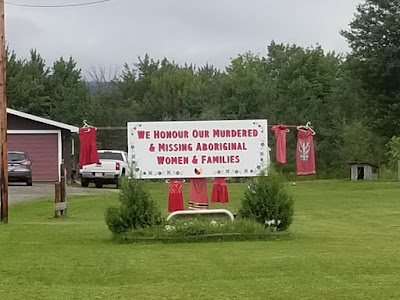 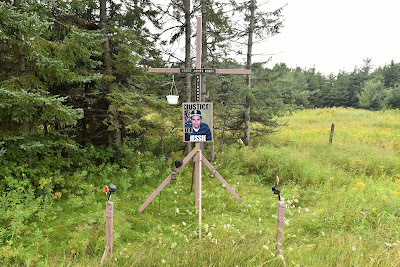 As we continued down the tree lined highway, there were constant reminders of the historical, social, and cultural tensions between Aboriginal communities and Anglosaxon attitudes and actions.  Eventually we came to a memorial which read "We honour our Murdered and Missing Aboriginal Women and Families." Red sun dresses were hanging around the edges of the large sign. We had seen these dresses hanging in people's yards as we crossed several reserves over the past few weeks, but we didn't understand what they represented until now.

The memorial refers to a grim situation that is considered a Canadian national crisis, and has been referred to by the CBC and in academic literature as an ongoing genocide in Canada. According to a report commissioned by Prime Minister Justin Trudeau in 2016, Indigenous women and girls made up 4% of Canada's female population, but accounted for 16% of all female homicides between 1980 and 2012. Other reports have even higher numbers. They were also found to be disproportionately affected by all forms of violence compared to their non-Indigenous counterparts, and far more likely to go missing. It is unknown how many Indigenous women and girls have been killed or gone missing since 1970, but it is likely more than 4,000. Many of these cases are unresolved, or the suspected perpetrator was never convicted. If one white woman goes missing in this country there is a nation-wide manhunt to get answers. This is an inexcusable situation that we as Canadians need to find a way to address. 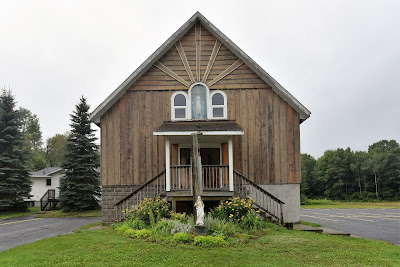 The weather remained fittingly dark and depressing as we continued on, wading through a downpour. We passed a beautiful circular community Center, a small stone church, and a set of wooden administrative buildings. Eventually we came to a variety store and gas station, where we stopped for a cold drink and to take shelter among the flower baskets on the porch.

As we continued along the rain seemed to let up a little. We found ourselves walking along the St. Mary's River. We could see Squirrel Island sitting in the middle. The far shore, which is part of Michigan, was lined with cabins, cottages, and homes, many of which had docks with boats. On the Canadian side there were several grassy parking lots half-filled with cars, which had banks of mailboxes. It made us wonder if those people lived on the island (which looked uninhabited), or if they crossed by boat to Michigan.

As the rain began to lift we started to see a lot of bird activity in the trees along the shore. We heard a few residents, including a White-breasted Nuthatch, Black-capped Chickadees, a Yellow-bellied Sapsucker, and several American Crows. The trees were also hopping with migratory songbirds, including American Redstarts, Cedar Waxwings, Blue Jays, and Yellow-rumped Warblers. There were likely other species, but my binoculars were fogged up and wet and it was very dark, making accurate identification difficult. It was nonetheless a joy to be in the midst of so much bustling activity! 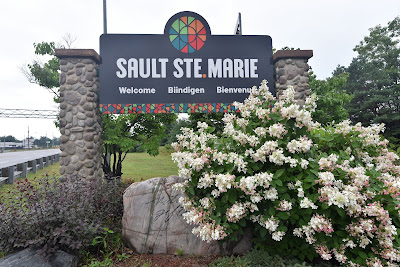 When we reached the junction with the Trans Canada Highway we found ourselves on the outskirts of Sault Ste Marie. 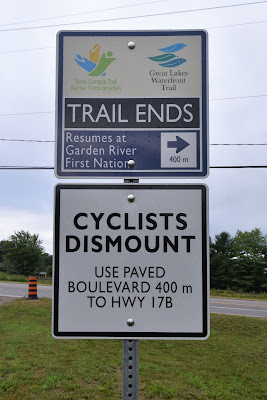 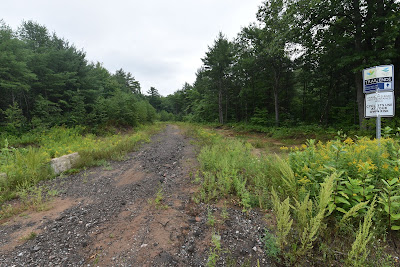 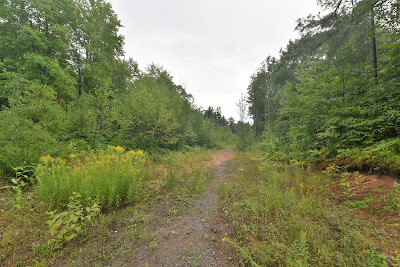 The trail followed the busy highway for a few short blocks, and then diverted down a decidedly sketchy looking sandy track that was overgrown with weeds and littered with garbage. The trail which lasted all of 20 feet actually said it ended there, and would resume in 400 m. We decided to chance the track, hoping we wouldn't find any decomposing bodies along the way, and 400 m later emerged into a quiet, treed subdivision. Phew.

Although we had technically arrived in Sault Ste Marie at this point, we still had another 10-15 km of hiking in the city to get downtown. We followed Queen St, which was a seemingly endless road that took us past many well-to subdivisions. Although most 'trails' that follow sidewalks through suburban neighborhoods aren't usually filled with other hikers or cyclists in our experience, this road had a bike lane and was full of cyclists. It turns out this is because it is part of a loop that winds through the city. 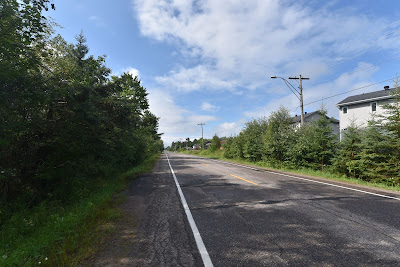 One of the highlights was stopping at the Absolutely Delicious bakery. While we were sitting outside enjoying chocolate raspberry squares and iced tea Sean discovered that the lens on the camera he has been using for the past couple of days was completely fogged up on the inside. He has been using a camera body borrowed from my generous and kind father these past few days. Discovering water inside his lens was a very discouraging development in an already less than ideal situation. 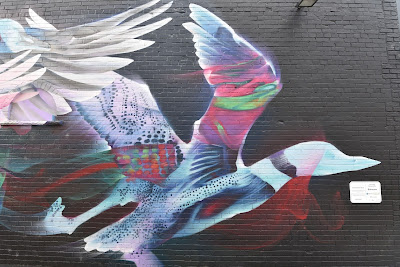 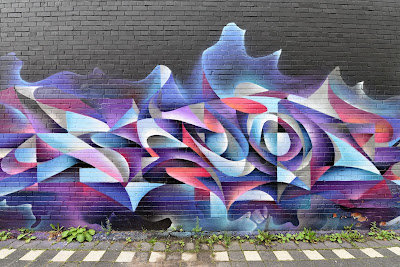 By this point we were tired of being soaking wet and ready to get cleaned up. As the sky began to darken once again, we walked the last 7 km into downtown, checked into a motel, and began the task of washing, drying, and cleaning up ourselves and all our gear.

We will be staying in Sault Ste Marie for the next few days while we try to sort out the logistics of hiking the land sections of trail between here in and Thunder Bay.  It seems like this may prove to be a bit more challenging than we anticipated, but we remain hopeful that the trail will provide but at the moment it seems that our luck and timing has just run out.
Posted by Sonya and Sean at 2:45 PM