An undignified way of Travelling : Sault Ste Marie to Marathon

Today seemed very long. Yesterday we walked a 22km part of the Great Trail which loop through Sault Ste Marie that we did not take on the way in, and then spent the rest of the day waiting for the Ontario Northland bus.  A first for us, waiting on mechanized transport.  At 10:30 pm we boarded the bus, bound Marathon utterly depressed by the situation.

After moving through the world at 5 kph for so long, it felt very strange to cover nearly 400 km of Trans Canada Highway in a mere 5.5 hours. Deciding against walking the highway around Lake Superior was not a decision we made lightly, and it came with many tears and much frustration.  However the implied costs of utilizing the trail shuttle from Lake Superior PP to Wawa and water shuttle to the beginning of Pukaskwa were too costly for us to consider.  The choice to set these sections aside has resulted in a stunningly huge amount of upset and a great number of nasty emails.  However, in the end we believe it was the right choice for us. Most of the next 1,100 km of Great Trail is a waterway, with only small sections of terrestrial pathways. We plan to walk as many of these as we practically can, highlighting the natural beauty we find along the way.

It was pitch dark and raining when we left Sault Ste Marie, but we could feel the bus beginning to climb almost as soon as we left the town. Gradually, as the night progressed, the sky began to clear. A half moon lit up the sky, and stars were visible between the racing clouds. We could tell there was a lot of beauty out there, just beyond the visible. We could see the dark shapes of rolling hills receding into the distance, stars reflected in the still waters of small lakes, and as the highway approached Lake Superior we could see a long silver moon trail stretching out to the horizon. 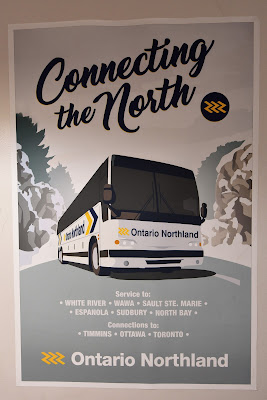 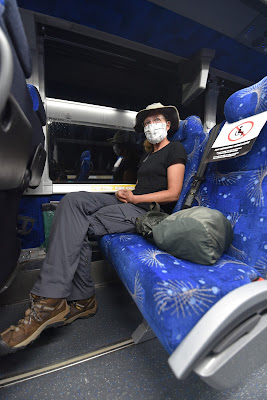 When the bus pulled into Wawa for a brief rest stop we got to see the new Canada Goose. Since 1963 visitors have been welcomed to Wawa by a giant Canada Goose, and since then it has become one of the most photographed tourist attractions in Canada. The idea for this monument came from the word "Wawa", which means "wild goose" or "land of the goose" in the Ojibwe language. Apparently the first Goose was made of plaster, and slowly melted. It was replaced with a steel goose, which eventually also needed replacing. When we visited Wawa a decade ago we saw the previous goose. 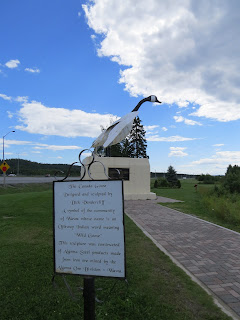 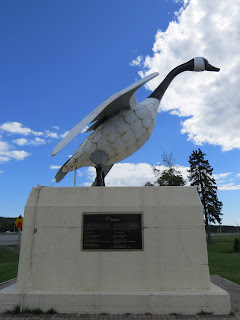 As we drove into Marathon at 3:45 am we passed a motel on the side of the road. There was a line of cars parked out front, and in glancing over something caught my eye. It looked like one of the cars was moving ... I suddenly realized the last "car" in the line was actually a large black bear, and it was pawing at the office door to motel! Oh my. 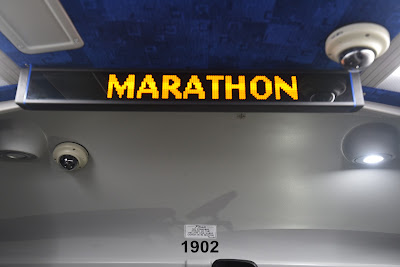 The bus dropped us off about a block from the bear/motel, outside of a closed convenience store. We gingerly made our way up the dark street and turned onto another road, directly across from the bear/motel. It was about a 20 minute walk through the dark, quiet streets of Marathon to the Penn Lake Park and Campground, where we will be spending a few nights. 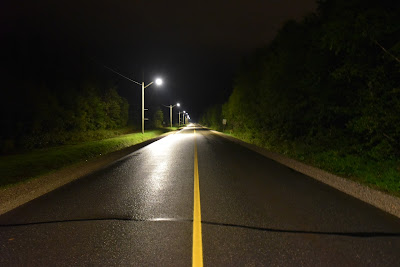 Thankfully we made it safely without getting lost or having any bear encounters. We set up our tent on a beautiful but very recently rain drenched site beside the lake, and gratefully fell asleep at 4:15 am.
Posted by Sonya and Sean at 12:32 PM