Sirens of Temptation and Trail Angels : Nairn Center to Espanola

Today began with the sounds of a fleet of logging trucks jamming on their air brakes heading in empty at 5:30 am. It was a cool morning, and the sun shining through the white pines was very beautiful. As we packed up we were grateful that we made it through the night without any further visits from the bear, although we were startled by screaming in the night, which sounded a lot like a raccoon fight somewhere nearby. 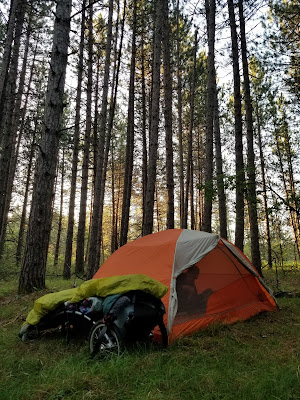 As we headed onto Highway 17 for the first 6.5 km of hiking we discovered a real treat. This part of the Great Trail overlaps with the Waterfront Trail, which is a signed route running 3,600 km from the Quebec Border to Sault Ste Marie. It passes through 150 communities and first Nations along the Canadian shores of the Great Lakes and St Lawrence River. In this stretch, the Waterfront Trail provided us with a wide paved shoulder that even had a white dividing line painted on it! This was so much nicer than walking on the soft, steeply sloped gravel shoulder of the highway!! 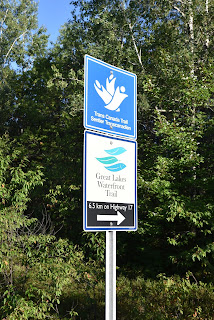 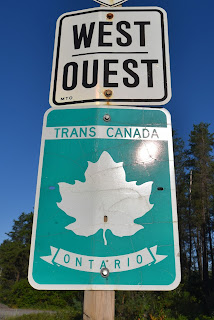 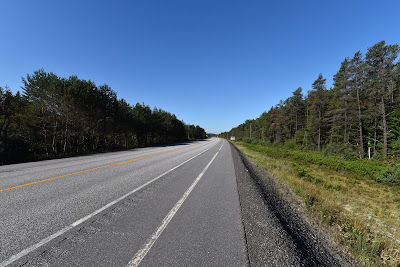 A few kilometers into the hike we crossed an impressive trestle bridge over the Spanish River that was right beside a trestle bridge for the train. On the far side was a picnic area on the edge of the river. As we took a break on a shady bench, a juvenile Yellow-bellied Sapsucker landed a few feet away on a tree trunk, close enough to take a phone photo! The trees around us were bustling with activity. A Common Yellowthroat was hunting around on the water's edge. A Cedar Waxwing was foraging in the top of a Trembling Aspen, and a family of White-throated Sparrows was competing with a group of young American Robins for berries in a nearby shrub. Overhead Ring-billed Gulls and a lively group of Cliff Swallows circled. 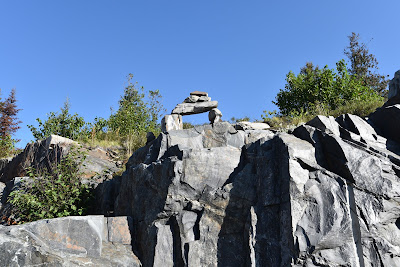 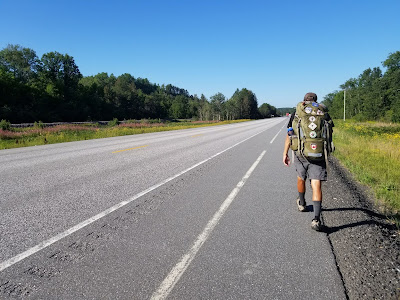 A few minutes after leaving this hotspot of bird activity we met either an angel or a devil - we can't tell which. A man in a pickup truck pulled over on the opposite side of the highway and waited for us to draw even with him. He asked where we were going, and offered us a lift to Thunder Bay. He said it would take him 11 hours to drive there, and wanted to see if he could help us out. Thunder bay is over 900 km from here, and we think it will take us over a month to get there, much of our walk being along the Trans Canada Highway along the Northern Shore of Lake Superior. Temptation comes in may forms throughout our lives - today our siren was motorized transport. We thanked him for his incredibly kind and generous offer.  He paused again saying that he could wait and help anyway we needed.  We thought for a moment, the temptation to get off this highway and end the road walking evident in us.  Ultimately however we bid him farewell as he pulled a u-turn and disappeared over the horizon. We can only hope this was the right decision. 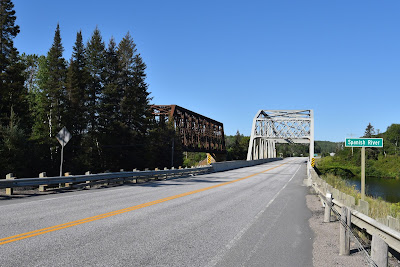 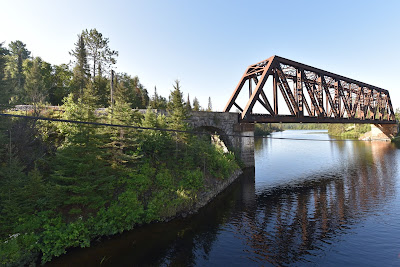 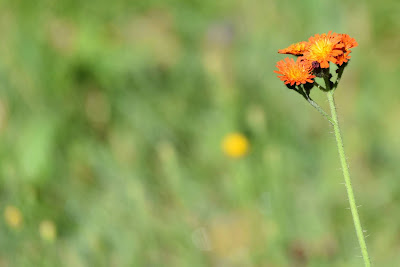 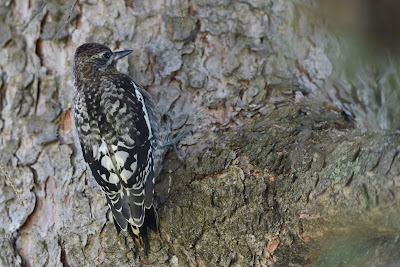 Just before we reached the turnoff for Jacklin Rd, which would take us into Espanola down a backroad, we had another wonderful surprise. A black Jeep pulled off the road ahead of us, and out of it emerged Julie and Simon of JUSI Adventures! It was so exciting to meet fellow cross-country Great Trail hikers!! In the past couple weeks we have been chatting online with them about the Voyageur Trail and sections of trail around the northern edge of Lake Superior which they have just completed, and we've really appreciated their advice. They also provided some fantastic trail magic in the form of nuts, dehydrated fruit, and cereal. We realize their food options are much more interesting and healthier than anything we have! 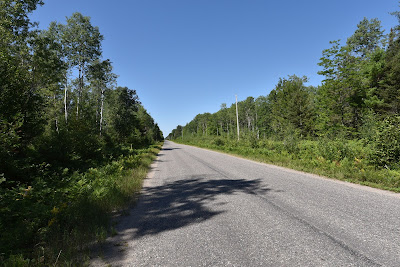 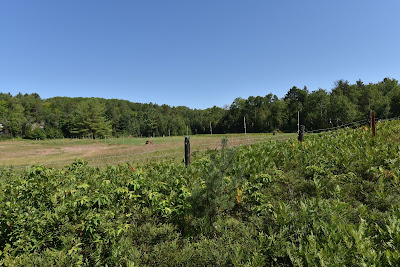 As so often happens on this trail, moments of pure joy are countered by moments of sadness. As we turned off the highway we spotted a porcupine at the side of the road. It had clearly been recently hit by a car and suffered extensive and irreparable injuries, but as we approached we realized it was still breathing, impossible as that looked.  We chatted for a moment, Sean poured his water on the road in front of the crying creature.  While the noble animal drank we sought to find a way to end its suffering, but as we approached it seemed to sense that we were now a danger and puffed up its quills.  The effort lead the porcupine to cry out once again.  He seemed determined to hold on until he chose to depart the world and so we could do nothing to help stop its pain.  It was one of the hardest moments that we have had on the trail this year.  Being out on the trail seems like it requires witnessing and learning to accept many different things, some of which we'd rather not see or feel, including injury and death. In some ways we exist outside society, but in others the buffers to life have been removed. 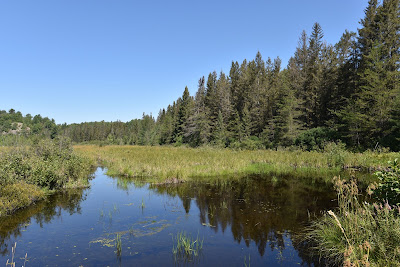 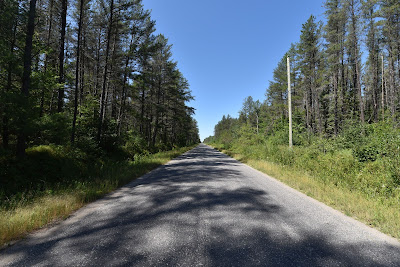 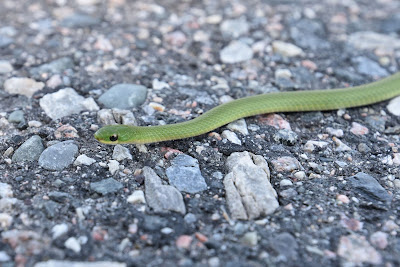 As we continued down the forested road we were thankful to have a break from the highway. The temperature had increased steadily throughout the morning, and by that point it was quite hot. We were surrounded by a mixed forest of white and red pines and white birch. An immature Bald Eagle circled overhead. A smooth, bright, jewel-like greensnake made it's way across the road. 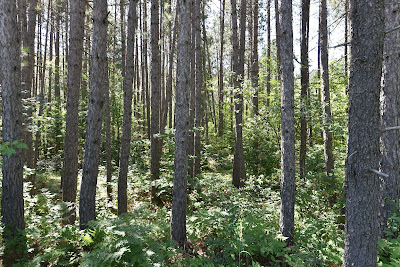 As we approached the town of Espanola we could see the top of a tall building extending above the treeline in front of us. As we crossed the bridge into town later in the afternoon, we realized this was part of the Domtar Espanola Mill. This large facility is located on the banks of the Spanish River, and produces over 200 different grades of technical and specialty paper, as well as high quality northern bleached softwood kraft pulp.
\ 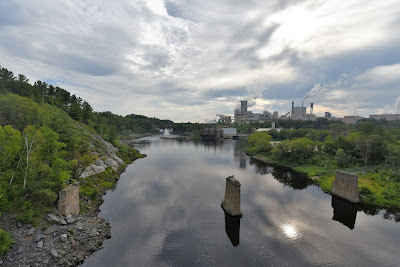 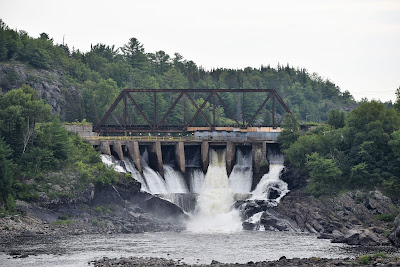 Espanola's history is linked to timber and pulp and paper. The town was founded in the early 1900's for the employees of the Spanish River Pulp and Paper company. The company was taken over by the Abitibi Power and Paper company in 1927 in a somewhat shady sounding deal, shortly before it shut down in 1929 during the Great Depression. Espanola became a Ghost Town until WWII, when it was used as a camp for German prisoners of war. The mill reopened in 1948, and after years of complaints and court cases resulting from the release of toxic effluent into the Spanish River, the Domtar Mill is now said to use one of the most stringent "zero-emissions" pulp bleaching processes in the world, and the area below the mill has become a fish sanctuary. 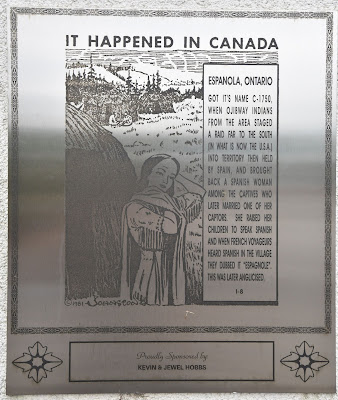 Out of curiosity we looked up why there are so many references to Spanish in this area of northern Ontario. According to an 18th century story, a party from the First Nations Ojibwa tribe brought a white woman who spoke Spanish back with them from a raid in the deep south. The woman married an Anishinaabe man who lived at the mouth of the Spanish River and taught her children to speak Spanish. When the French explorers arrived and heard fragments of Spanish being spoken they remarked 'Espagnole!' thereby giving the river and the region their names. 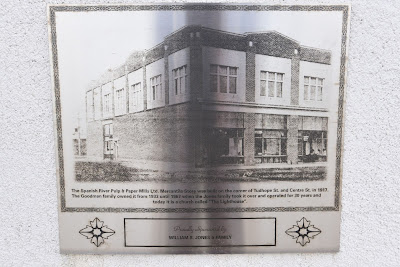 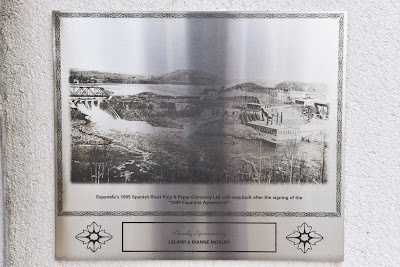 We stopped at the Northwest Trading Company for ice cream on the edge of town. This busy shop sells a huge selection of beautiful products, crafts, and art created by Indigenous people, as well as locally produced meats and other foods. It is an eclectic and interesting spot to visit. I was particularly happy to discover that they sell raspberry bugaboo ice cream, which is one of the finest flavors in my opinion (and not just because of its name). 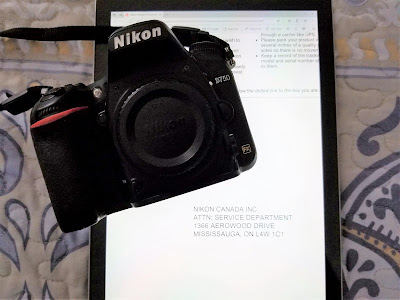 Although we only covered 16 km today, we decided to stop in Espanola to give Sean's injured toes a break, let him rest is sore left shoulder (after being hit by the wood yesterday and because his backpack strap is now tied and offset) and to begin trying to deal with the broken camera. After a long and frustrating afternoon we understand that we can send it in to Nikon for assessment for a $400 fee, but it could take until after Christmas to get it looked at because staff have been reduced during the pandemic. That doesn't seem like a viable solution. Lens itself is a complete write off and loss and will eventually need to be replaced.  Ordering a replacement for the camera is not only prohibitively expensive, it also comes with the headache of exceeding the cost of an item that can be Flex delivered to a post office near us, and also has a relatively long waiting period for delivery (months, not weeks). Since part of our goal is to photograph the country as go, this is a problem. What to do?

We've discovered some unexpected side effects of the pandemic this year, and a shortage of supplies is one of them. When this all began people started hoarding toilet paper. This made little sense, but since then it seems panic buying has gone through various phases. The current one involves outdoor gear. We seem to have reached a point where a lot of our gear is falling apart (from our shoes to our tent), but is strangely difficult to replace. Keen shoes and sandals, Klymit sleeping pads, Sean's backpack, MSR camping fuel, and freeze dried food all seem to be available in highly limited selections or are on back order.  The unexpected challenges that we are facing we could never had prepared for or anticipated two years ago are now our reality and have to be met with on its own terms each day as best as we can. 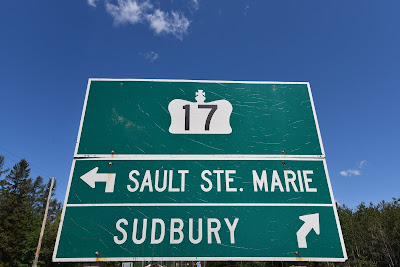 Although we face certain obstacles, we recognize our highly privileged position. Our difficulties are minor compared with the situation many people find themselves in, and best of all we have help. At this moment, we are most grateful to my parents for their kind and generous support, help, and understanding. We couldn't ask for more.