It was an overcast and slightly cooler morning as we headed off through downtown West Nipissing this morning. It was a beautiful little town, with landscaped parks, several brightly coloured murals of birds and flowers, brick intersections with rainbow crosswalks, tree lined streets decorated with flower boxes, and a greater than normal density of fry stands. 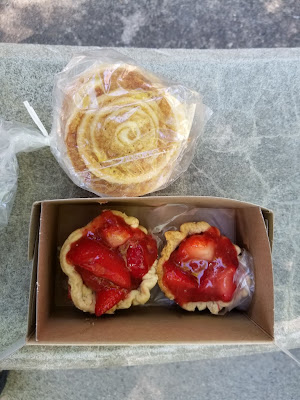 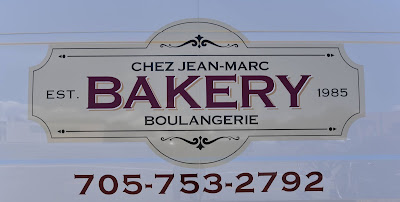 On the way we stopped at the Chez Jean-Marc Boulangerie and picked up some delicious strawberry tarts for breakfast. The berries were fresh from the Leisure Farm down the road, and they were extremely tasty! We sat in the park, beside a tall stone cross commemorating the passage of Jaques Cartier through the area in 1534. 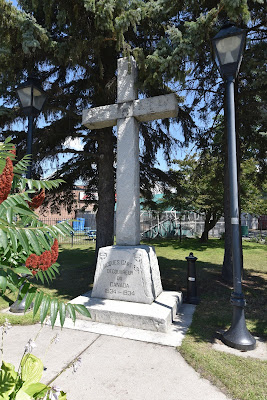 Afterwards we wove through town, out past the hydroelectric dam. There wasn't much water coming over the dam, leaving the rusty red rocks of the shield exposed at the bottom. Looking down river we had a good view of an old metal trestle bridge. 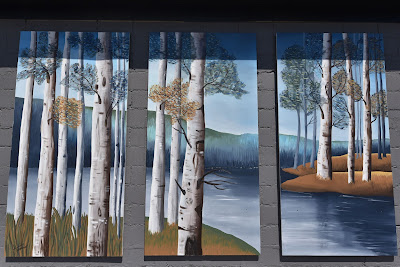 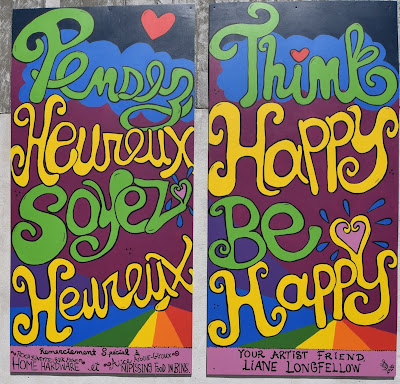 We followed the Voyageur Cycling Trail out of town on a relatively quiet, paved backroad. This cycling route is 645 km long, spanning from Ottawa to Sudbury and passing through 29 northern and rural communities along the way. It roughly follows the waterways that have been used for transportation and trade by Indigenous People for thousands of years, and later by the early French explorers and fur traders. Roughly 200 km of the Great Trail follows the Voyageur Cycling Route. 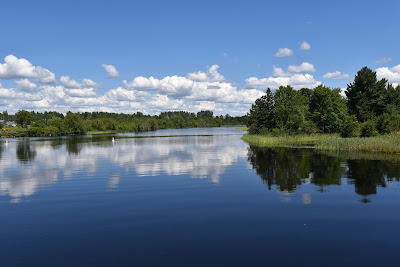 We made our way through a residential neighborhood and then almost immediately found ourselves in an open, pastoral, landscape as we passed Cache Bay. It was still possible to see, hear, and feel the legacy of the French explorers in this region. The names of the roads were French, as were many of the names on the rural letterboxes and farms we passed, and we heard French spoken in the town just as much as English. 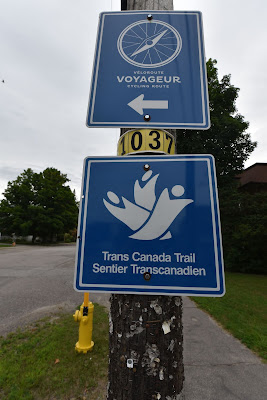 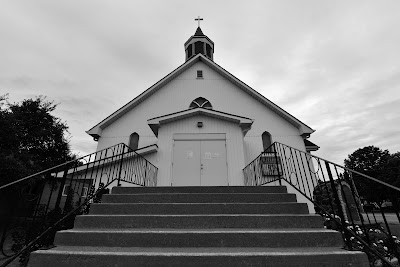 Perhaps it was in our imaginations, but in some ways the countryside reminded us a lot of the landscape we hiked through in France. The fields were smaller, and bordered with trees. Bright yellow, white, pink, and purple wildflowers lined the sides of the roads and filled the occasional fallow field, filling the air with a fresh, sweet smell. The farms and farmhouses were very tidy, many featuring large gardens and beautiful flowerbeds. 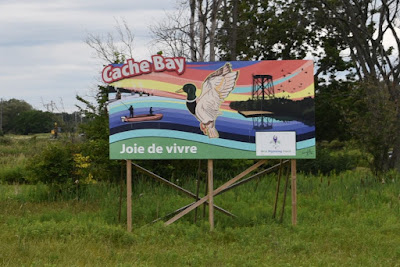 In other ways, this rural landscape was different from those we've previously hiked through. The fields were a patchwork of golden grains, dark green soy, and lush, light green hay. A few contained horses or cows. In between were patches of coniferous spruce forest, a thick layer of ferns and moss covering the ground, and towering white pines jutting out above the rest of the canopy. Between these familiar elements pieces of grey and pink, lichen-covered, granite shield poked up through the soil. It was an interesting combination of agricultural and Canadian Shield landscapes. 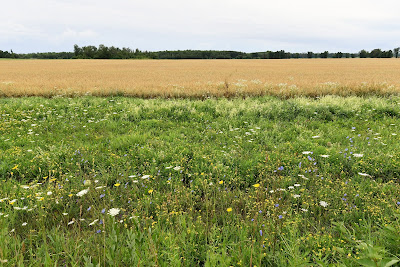 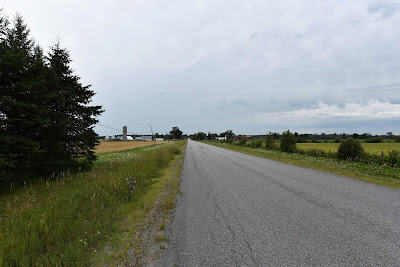 Of course, the rural landscapes of Ontario usually feature beautiful landscapes and some interesting barns, and this one was no exception. Sean happily took the opportunity to do some barn photography. One thing we noticed was that many barns, sheds, and buildings features the brightly coloured wooden quilt squares. Perhaps this route is a quilt trail too! 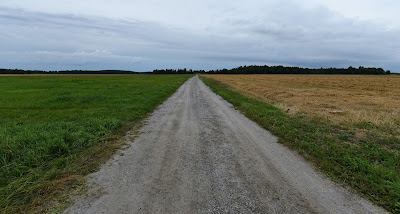 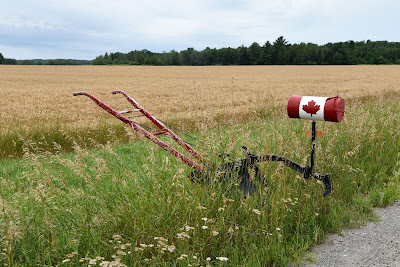 The relative quiet of the country roads gave us an opportunity to enjoy a few birds as well. Early on we spotted an American Kestrel perched on the utility wires at the side of the road. A large group of European Starlings was wheeling and turning above a golden wheat field. A group of Rock Doves perched atop a grain silo. We heard the distant call of a White-throated Sparrow in a patch of forest, while beside us a Song Sparrow gave an enthusiastic trill from a nearby stalk of grain. Chipping Sparrows and American Goldfinches bustled about on the edges of farms. A little farther on a Northern Harrier flew low over a pasture. As we crossed the Veuve River a flock of Tree Swallows was flying overhead, chatting noisily. 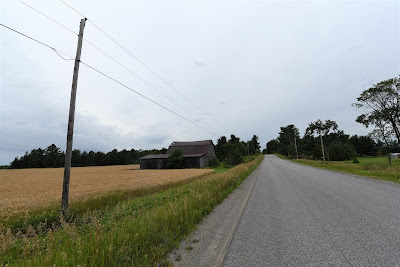 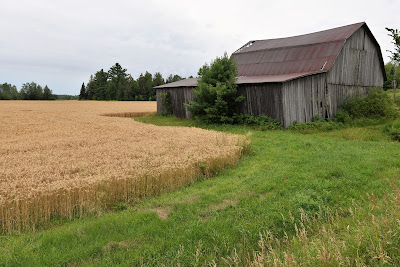 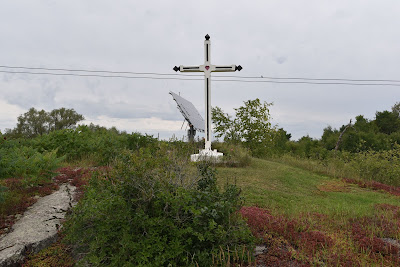 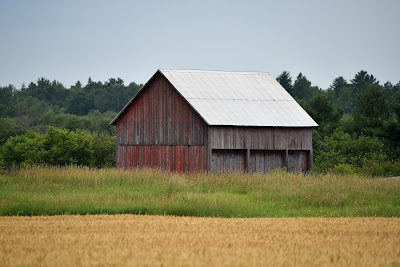 As we approached Lavigne we passed a farmhouse with two people outside, setting up a stand with fresh cucumbers and homemade strawberry rhubarb jam at the end of their laneway. As we passed they asked about the hike, and offered us fresh cucumbers for our lunch! 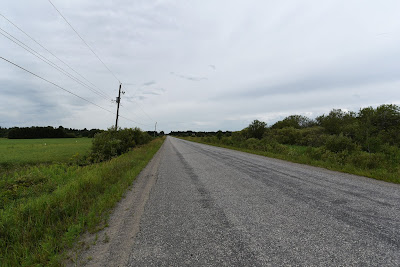 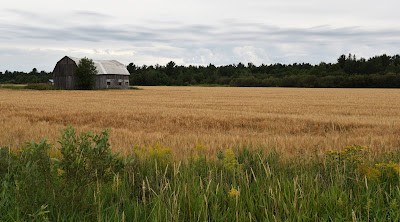 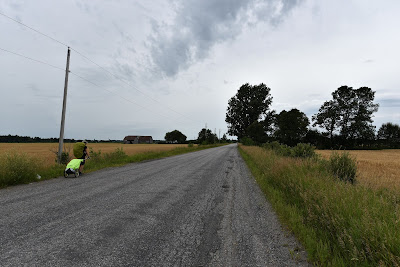 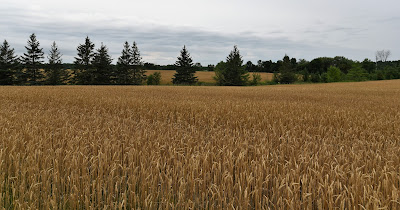 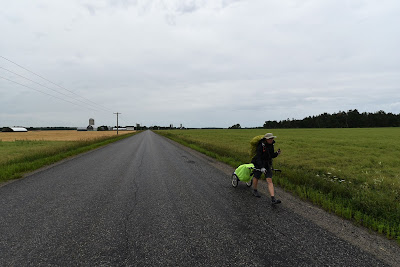 There was 50 mm of rain forecast for today, so we decided to make it a short one and stop at the beautiful Joli Voyageur Campground in Lavigne. We arrived just after noon, and the very kind and helpful campground owners let us pitch our tent in a beautiful campsite under a white pine just before it started to rain in earnest. It had been spitting all morning, but we'd managed to stay mostly dry. We are very grateful to be inside the dry tent this afternoon, listening to the rain pour down outside. This campground offers a wide variety of activities, as well as hot showers and laundry facilities, the latter two of which we very gratefully made full use of. 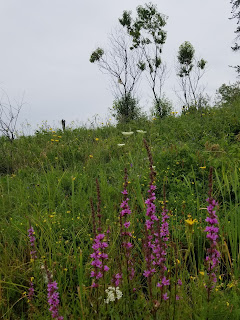 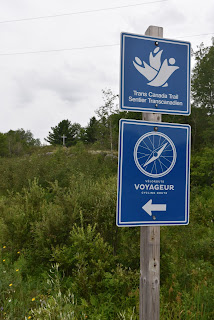 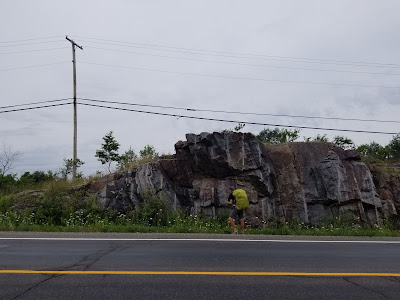 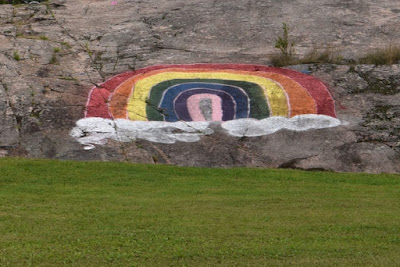 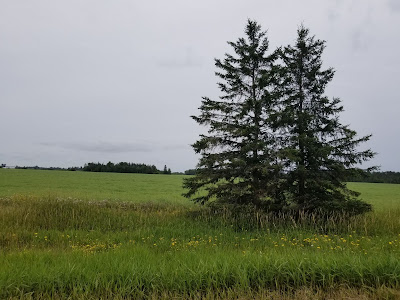 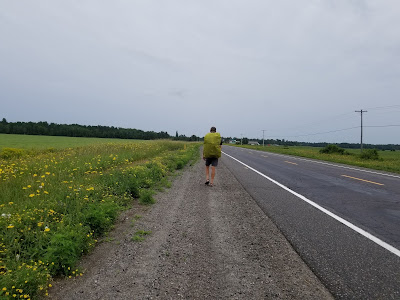 As we lay here in the tent, listening to the rain outside, we have become an object of much curiosity for the children who are riding around the campsite on their bikes in their bathing suits. It seems to puzzle them deeply that we are here, in our tent, but we have no car. There is much speculation about how we got here. Maybe they lost their car, one boy considered out loud.  Maybe I am a witch, another child wondered beside our tent.    Hearing their guesses is fun and reassuring. 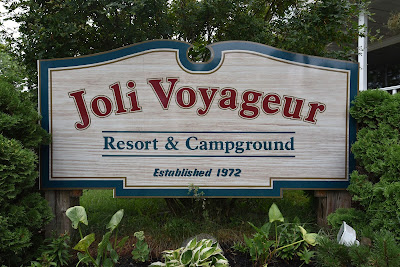 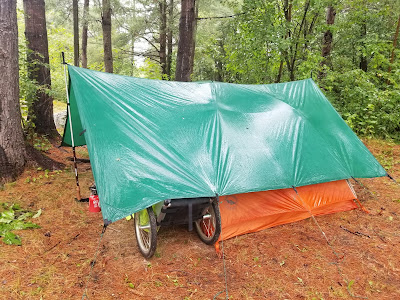 We are glad to see these active, curious children, especially after a conversation with the campground owner, who says it is more common now for families to leave the campgrounds early because there is no access to WiFi. Let's hope we can convince even just a few that being out here is a wonderful place to be!