A keen observer of the Great Trail Map will notice that between Sudbury and Iron Bridge and Iron Bridge and Sault Ste Marie the pathway is not a singular line but is instead a series of choices and options for the traveller over a distance of 374 km.

After Sudbury the Trans Canada Trail gives us the option of following one of two routes – the first, the Huron Shores Trail, which continues largely along and around the Trans Canada Highway.  This portion of the trail does not as strictly keep us on the busy sections of the highway, but it nonetheless stays primarily on roadways and concessions.  The great advantage to this route is that we were able to travel further each day by keeping our Wheelie with us and continue to offload most of our gear weight into it.      The other option which was available to us was the Voyageur Trail which would have allowed us to venture onto the wilderness of Northern Ontario from Spanish to Elliot Lake and again from Iron Bridge to Sault Ste. Marie. This route presents a singular catch however in that this track does not go right through east to west as it has breaks in the trail in the midst of the wilderness of Northern Ontario.

Having arrived in Iron Bridge we have clearly opted, to trek the Huron Shores Route from Sudbury to here.   However after several days again on busy roadways and the Trans Canada Highway, we had family send us a resupply box to Iron Bridge with the intention of switching to the Voyageur Trail in order to be done with roads for a while. We have received 15 days of freeze dried meals, and arranged to be able to ship our Wheelie back to BC in order to trek on the rugged terrain which the Voyageur Trail is noted for.

With all of that said, no choice is ever easy and we need to be willing to adapt to changing circumstances, trail conditions, and advice from experts.  As such despite wanting to desperately get off the Trans Canada Highway and move off the local roadways we are left with the realities of the moment. 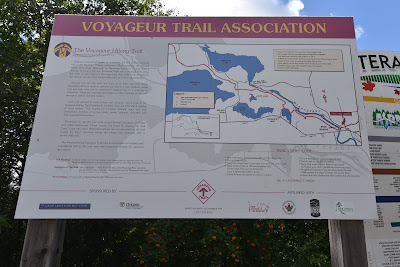 This year, owing to Covid 19 the Voyageur Trail Association announced that "the VTA has temporarily suspended all Association led and coordinated group hikes and activities, including trail maintenance. Members are advised that sections of the trail are remote, and in need of maintenance following winter trail use and winter environmental conditions. Due to COVID-19, our regular seasonal maintenance is not possible at this time."  As a result members of the Voyageur Trail have contacted us stating that the trail is "in vast disrepair", "ill maintained" and "almost unfindable as nature has taken it back" in some sections including the parts between Iron Bridge and Sault Ste. Marie.  Apparently maintenance hasn't been possible in a few years in this area due to a lack of trail stewards.  Their overwhelming suggestion was to not attempt this part of the trail.
In addition, we've recently been in touch with Julie and Simon of Jusi Adventures. They were unable to complete this section of trail last year because it was unmaintained and too difficult to follow. They tried again this year, from several access points, and reported that conditions had deteriorated. They were unable to get more than 50-100 m down the trail.


What this all means is that while we had hoped to hike the portion of the Voyageur Trail from Iron Bridge to Sault Ste. Marie, we have ultimately decided to hike the Huron Shores trail, which continues follows backroads instead.  With more weight on us, the loss of our Wheelie seems unthinkable and given the stated conditions of the trails at the moment and conversations with recent hikers and local trekkers it appears that attempting to bushwack the Voyageur Trail is not practical or even possible. 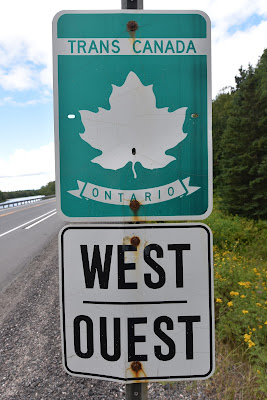