Today seemed to be reminder of our own vulnerability, and how quickly things can change. The traffic from the Trans Canada Highway woke us up around 5:30 this morning. Half an hour later a stream of 5 or 6 police cars shot past, their sirens screaming. Despite the unsettling noises, when we looked outside, we found a magical looking world, shrouded in mist. It was a beautiful reminder that nature really can be found anywhere, if we just remember to look. 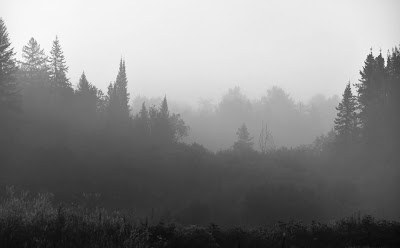 Last night we met an extraordinary father and son team, and as we made breakfast we had another chance to chat with them. The son is 17 years old, and he has ridden his bike here from Vancouver, with a plan to get back home to Ottawa in the next three days or so. His father has driven the support vehicle with their gear, and by the sounds of it, done lots of his own exploring along the way. They had lots of advice and useful information for us, which we really appreciated. What an inspiring story for someone so young! 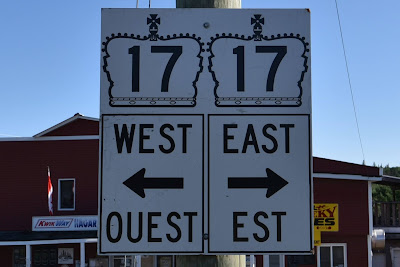 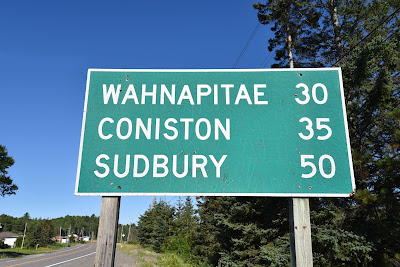 We set off down the Trans Canada Highway around 8 am. The scenery on either side of us was amazing - the winding Veuve River, snaking railway tracks, and dark forested hills on one side of the highway, and the tall, solid, pink Canadian Shield on the other with its streaks of glittering black, white, and grey. 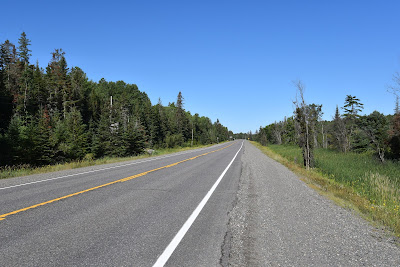 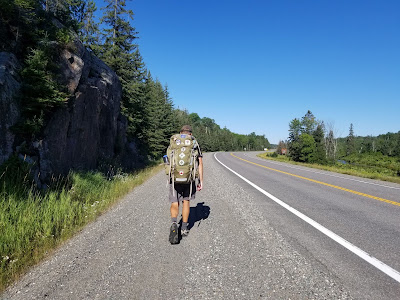 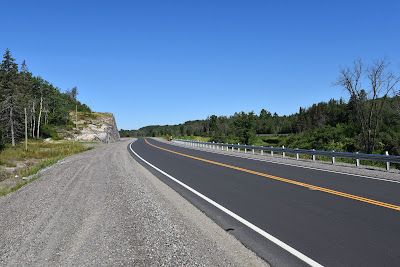 Over the past few days we've been talking a lot about what comes next. The Great Trail becomes a waterway along the northern shore of Lake Superior which we are unequipped to paddle. There are a few disparate sections of land trail in the National and Provincial parks along the shoreline, but they are separated by about 600 km of Trans Canada Highway. The father and son had described the beauty of the parks around Lake Superior, which we've visited previously and love, and almost convinced us to hike the highway around to do those sections. It took about an hour of walking on the narrow, steeply slanted, eroding highway shoulder, with its sharp gravel and non-stop traffic roaring past us about 4 ft away at 100 kph for us to decide we aren't walking an extra 600 km under these conditions, especially since they aren't even part of the land portions of the Great Trail. We'd love to find a way to do the sections of actual trail through the parks, but walking the highway is incredibly dangerous, extremely painful, and highly unpleasant. 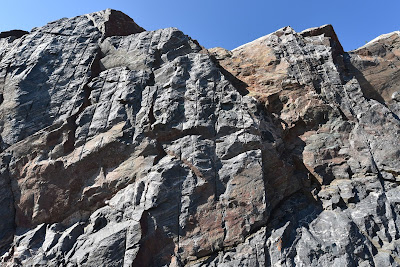 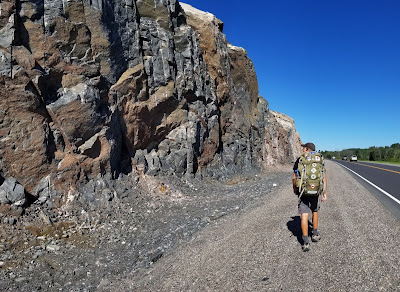 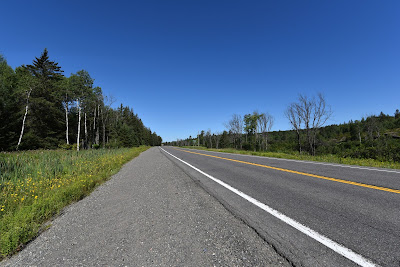 A few kilometers into our hike we came to a rest stop and picnic area at the side of the road. We took a few minutes to rest at a shady picnic table, and walked the tiny footpath down to the Veuve River. The calm water was a dark red, and it contrasted beautifully with the mounds of pink flowers that covered the riverbanks. 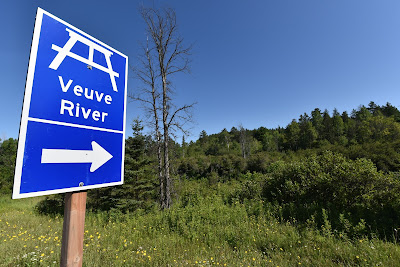 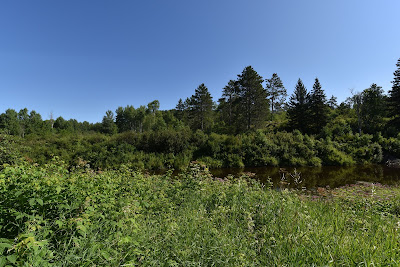 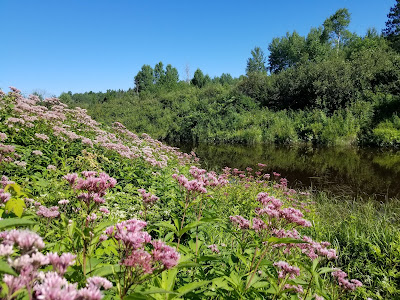 We soon headed off with several kilometres of the Trans Canada Highway to cover before our next planned respite from the day's traffic. 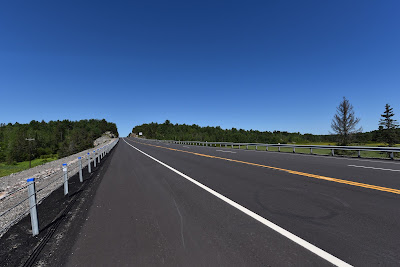 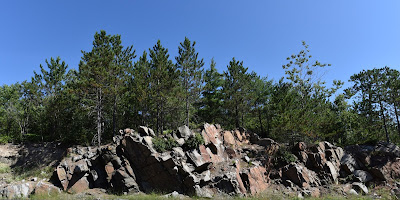 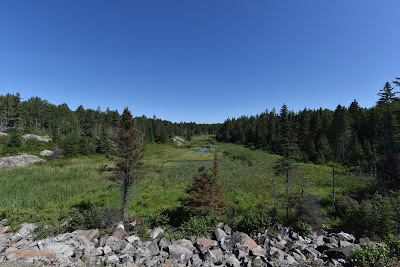 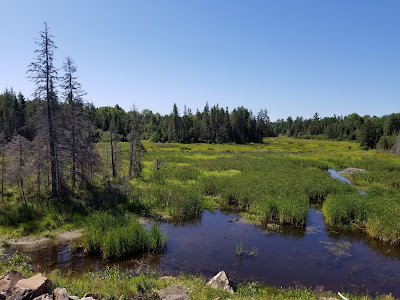 Our next diversion off the highway was into the community of Markstay. This was a beautiful, quiet, town with a fire station, post office, public school, general store, and restaurant. The Markstay Restaurant was open for take-out, so we stopped for some ice cream. We began chatting with the friendly owners about our hike, and before we left they very kindly and generously donated two bottles of cold Gatorade to our efforts! This turned out to be the perfect treat for later, as we made our way along the highway through the rising afternoon heat. 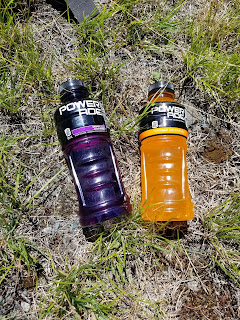 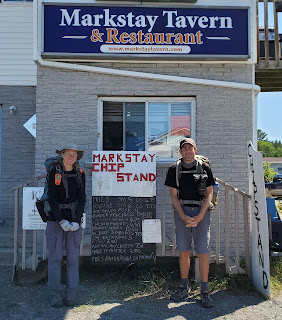 On our way through town we passed a house with a huge garden that was absolutely full of blooming flowers. We also passed a beautifully landscaped memorial park to the people who gave their lives in WWI and WWII. Yet another community that made a huge sacrifice in an effort to restore and maintain peace in the world. 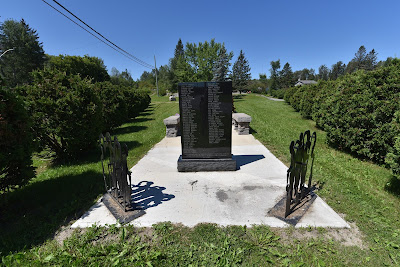 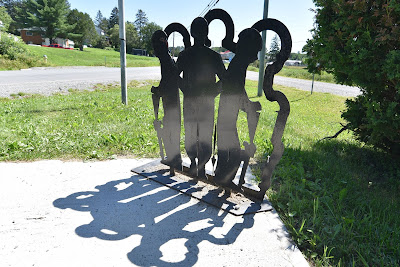 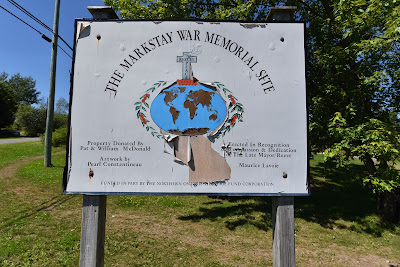 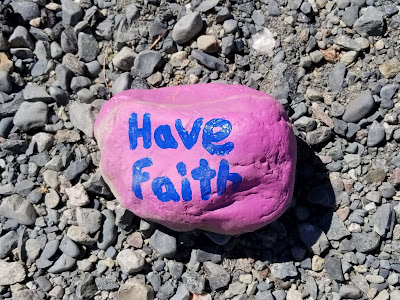 After leaving Markstay we had another stretch of highway walking. The sparkling, pink rocks of the shield seemed to glow in the sunny afternoon. We passed beautiful marshes and wetlands. At the side of one large beaver pond we spotted a little cabin in the woods, a small boat sitting out front as if waiting patiently for adventure. 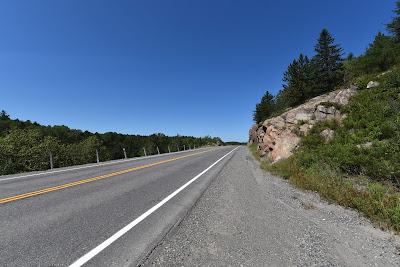 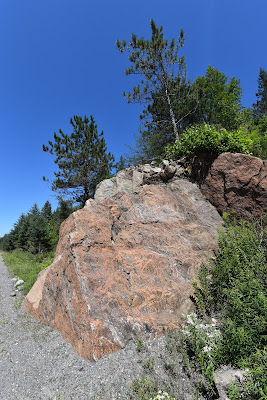 As the afternoon progressed, and we approached the outskirts of Sudbury the traffic increased a lot. At one point we spotted a large piece of metal lying on the highway in the lane closest to us, only a few feet from where we had to walk. We stopped, not wanting to get too close as the traffic roared past. As we hesitated, a pickup truck clipped it, flinging it onto the verge with great force. It landed about 2 feet away from us right in our path.  I'm not sure the driver even noticed us or the metal that he had kicked up. It was once again a firm reminder that we are very vulnerable out here. 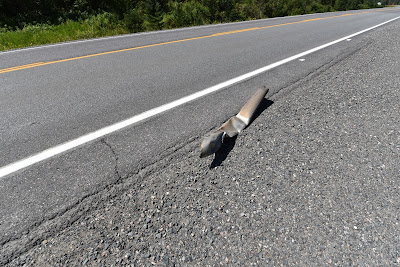 We quickly tossed the metal into the shrubs which made it made it safe for us to pass.  However it is moments like that which make us think maybe guardian angels and St. Roch, the patron saint of hikers, are watching over us. 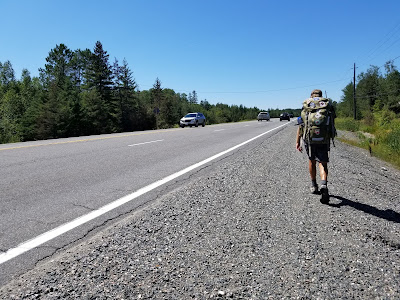 A little farther on we had an opportunity to divert off the highway for a few kilometers down Park Rd. This turned out to be a quiet gravel road lined with small houses and an RV park. One of the RVs had clearly burned last night or this morning, and there were many firetrucks and cars surrounding it while the firefighters and investigators presumably tried to figure out what had happened. As we inhaled the smell of wet, recently charred wood this seemed like another reminder of how quickly things can change in life. 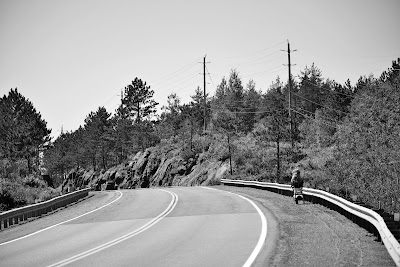 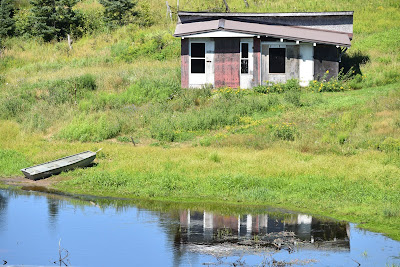 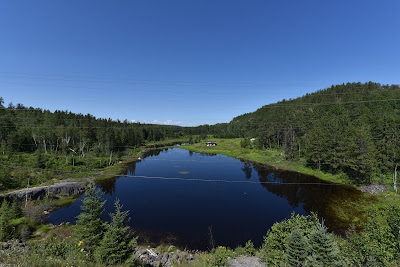 In all we walked 29.8 km of highway today. As we reached the outskirts of Sudbury the drivers of several cars beeped their horns and waved enthusiastically at us, and all day we received friendly waves from motorcyclists. Nonetheless, the constant and deafening roar of the traffic was draining, and the sloped shoulder of the highway was painful to walk. Tomorrow we have another 12 km of highway, and then we will begin to walk the Sudbury Camino! 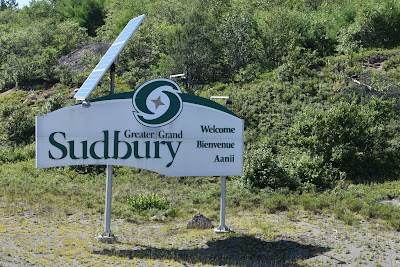