Today was a slow day in which we hiked a leisurely 10 km across Barrie. After looking at the maps and trying to guess our next few stopping points, we decided to take it easy today, before making a two day push north to Midland. As an extra treat, it rained last night, and today was overcast and felt like 26°C with a slight breeze. It was such a sweet reprieve from the heat! 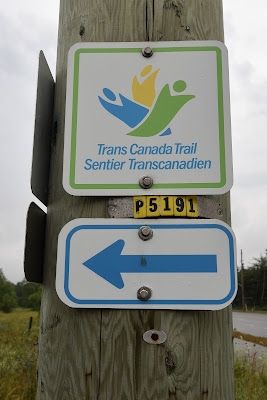 We began by hiking some very busy roads lined with plazas containing many big brand name box stores and restaurants. From the 1980's to the 1990's Barrie more than tripled in size, going from around 38,000 residents to nearly 130,000. There is a lot of new development in the area to support this growth, and we got to see some of it this morning. 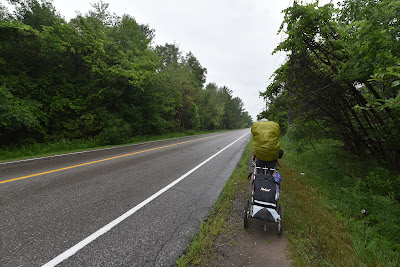 The next section of trail wove us through a subdivision whose streets were all named after waterfowl. We walked from Loon Ave. to Widgeon St., passing Drake Dr. and Gadwall Ave. on the way. On one hand this was kind of cool, but on another level it always makes me a little sad to think that developments like Fox Hollow and Tall Oaks are named for the landscapes and wildlife they replaced.

We wove through a couple neighborhood parks, with sports fields and some pretty cool looking climbers (still closed due to covid 19) before popping out on Yonge St. This is the same Yonge St. we crossed outside Union St. in Toronto, and the same Yonge St. I grew up two blocks away from. It is not the world's longest street, as was once a popular rumour, but it does connect Lake Ontario to Lake Simcoe. 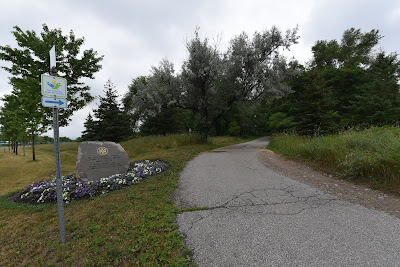 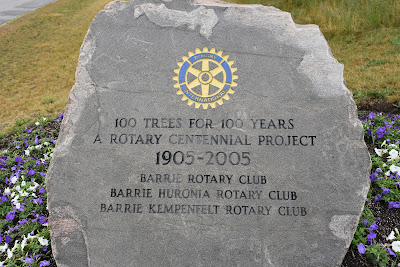 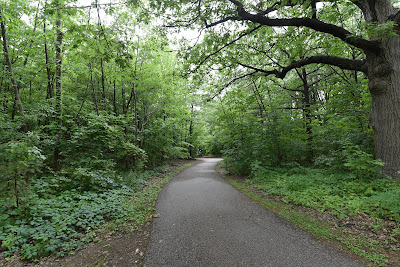 Shortly after crossing this street from my childhood we made our way down to the Military Heritage Park, which is a large green space running the length of the Barrie waterfront.

As we entered the park we came to a plaque commemorating the Rotary Club's contribution of 100 trees in celebration of the park's centennial in 2005. As we've hiked across Canada we've noticed that a lot of municipal parks have been built and improved by local Rotary Clubs. This organization does amazing work, and reiterates a lesson we seem to be learning a lot lately - communities are built by a few dedicated individuals who volunteer their time, energy, and money. Trails are built, natural spaces are protected, and parks are created because of a small group of people who want to change the world for the better. We'd like to say thank you to all those people. 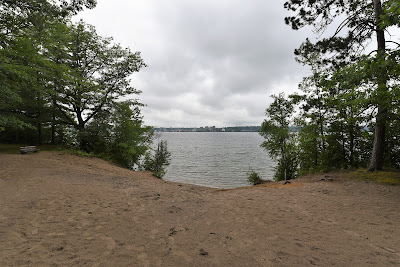 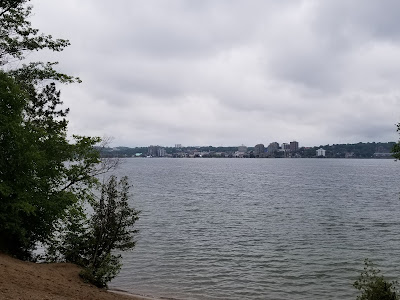 As we made our way into the park we got our first glimpse of the ruffled grey waters of Lake Simcoe! This is the fourth largest lake in the province apart from the Great Lakes. The Wyandot (Huron) people called the lake Ouentironk, which means 'Beautiful Water.' It was also known as Lake Taronto until it was renamed by John Graves Simcoe, the first Lieutenant-Governor of Upper Canada, in memory of his father, Captain John Simcoe of the Royal Navy. 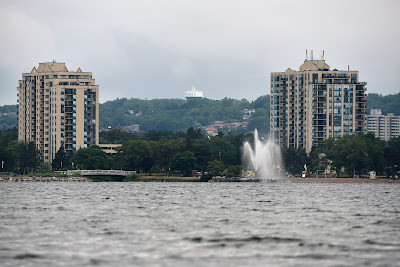 As a child I spent many summer weekends happily playing on the pebble beaches of Lake Simcoe, swimming in the lake, and feeding chipmunks with my mother while my father went windsurfing. In the evenings we'd have dinner together at a local restaurant and then drive home on the gravel roads.  It was very exciting to be back on the cedar lined footpath that ran along the shore of the water.

As we came to a break in the trees we spotted a group of eight Common Mergansers floating near the shore. Farther out a large group of Mallards bobbed in the waves, and as we stood on the shore two Common Loons flew past overhead. 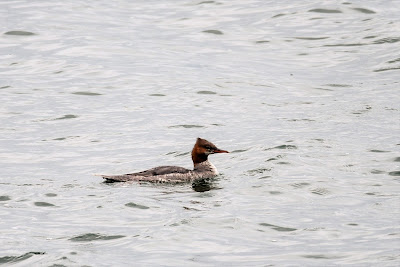 As we made our way around Kempenfelt Bay along the waterfront we joined a paved, two-lane bike path that was filled with people out enjoying the cooler weather. From there we got a clear view of the Barrie skyline, which looks highly developed. 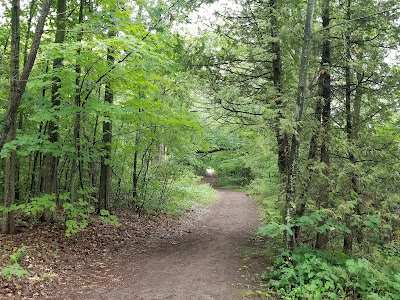 At the end of the park, right on the water's edge, we passed the modern Allandale GO train station. A little farther along we came to a red brick building that was the original Allandale train station. In 1853, the Ontario, Simcoe, and Huron railway opened between Toronto and Allandale, and Allandale became the northern regional headquarters. In 1888 the line became part of the Grand Trunk Railway. In its heyday, the station was an elegant passenger depot, with a fancy restaurant, lighted tower, and covered walkway.

Today the abandoned station sits in a beautifully landscaped park, opposite a large memorial for World War II. The memorial not only tells the stories of the soldiers who fought in the war, but also of the nurses, shipping industry, support workers, and role of the Indigenous community. 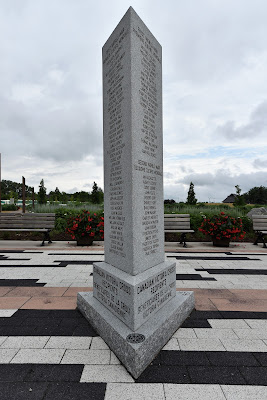 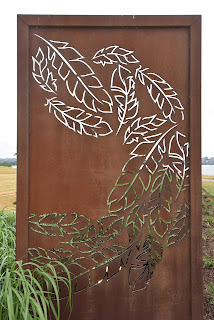 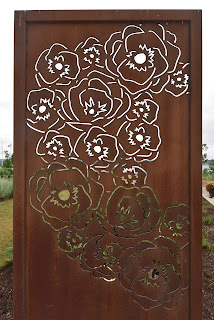 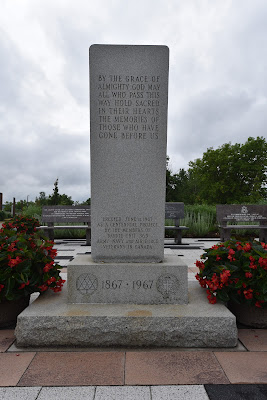 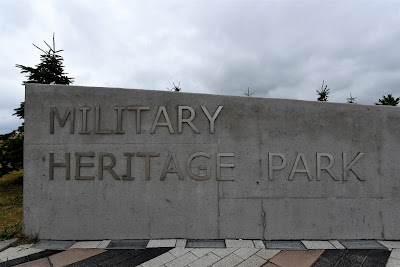 The Heritage Waterfront Trail took us around the bay, past condo towers on the opposite side of the street, a marina that was full of power boats, and through a grassy park with a concession stand, picnic tables, a large climber, public washrooms and showers, and beautiful landscaping. 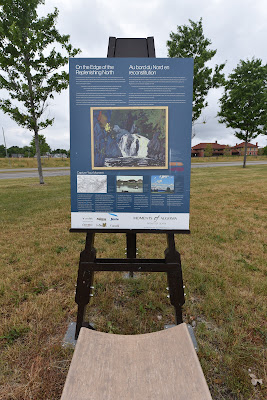 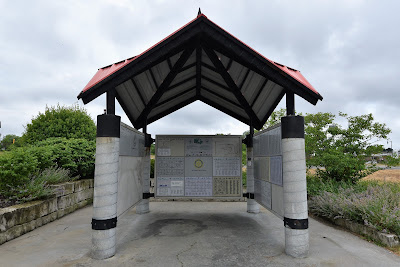 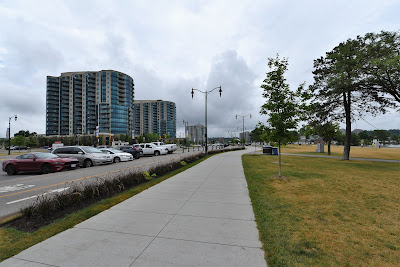 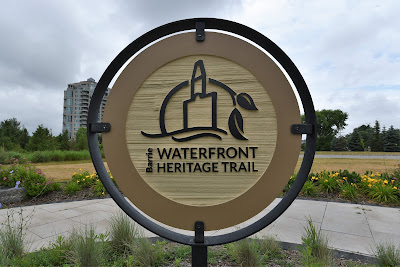 Beside the marina we came to the iconic 'Spirit Catcher.' This large steel structure was created by Ron Baird for Expo '86 in Vancouver. It represents the Thunderbird, the messenger for carrying people's dreams and desires to the Creator. The donation of the artwork in 1986 inspired the creation of a public art gallery in Barrie, and this became the first piece in the MacLaren Art Center collection. We had a few dreams of our own to send to the Creator. 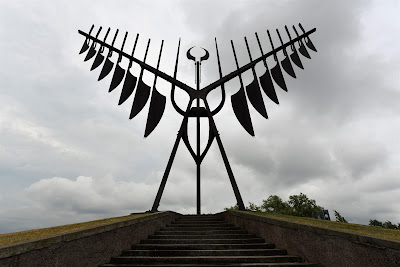 We turned away from the waterfront at the Millenium Park, where local festivals are held. 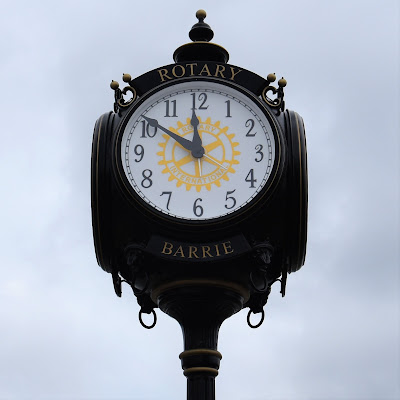 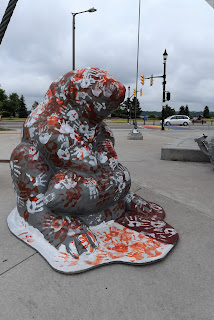 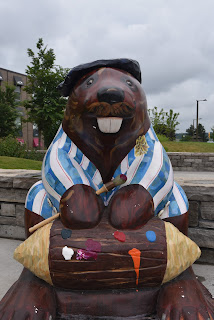 In the small concrete amphitheatre that faced the water we came across several painted beaver statues. It seems these colorful and charismatic creatures are part of the Geat Canadian Beaver Race and Festival. This annual event, which is held at the end of Septmeber, is hosted by the Kempenfelt Rotary Club. It is held in the Heritage Park in Barrie, and as far as we can tell, it involves racing 10,000 rubber beavers, which can be purchased for $10 each. All the proceeds go to charity.

In a very unusual move, the Great Trail then routed us through downtown Barrie. Unfortunately, the downtown streets are currently under construction, and resemble gravel piles lined with yellow metal construction fencing. 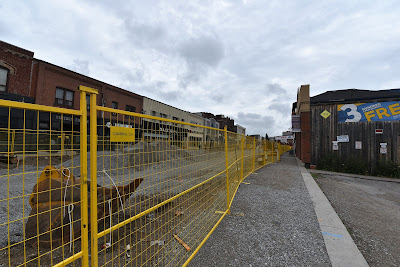 As we wove through the fencing on the sidewalks we noticed an elderly lady pushing her walker slowly down the middle of the street. She was beginning to realize that she was fenced into the construction site and would be stuck unless she walked several blocks back. She asked us if we could see an escape route for her, and then asked Sean if he could life the fencing to let her out. When she had safely escaped she asked where we were walking, and told us that she had backpacked across Europe in the 1950's, and was still a lifetime member of the youth hostel, so she still got their newsletters and promotions. She reminded me a lot of my own grandmother, who also uses a walker now, and who also once walked across Europe, albeit under very different circumstances.

As we continued to head up through town, away from the lake we found ourselves in another neighborhood park. This one had a public washroom building covered in colorful bird art. We spotted a Northern Cardinal, an Indigo Bunting, a Cedar Waxwing, and a Pileated Woodpecker. 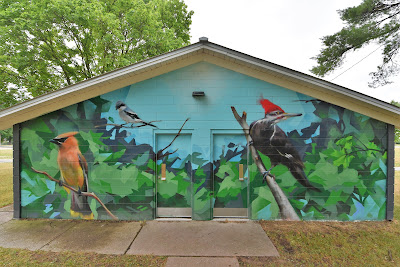 We stopped at the Post Office to pick up a re-supply box kindly sent by my parents. It contained some wonderful treats, as well as a few replacement parts for various electronics, and my old eyeglasses , since my current ones have been held together with tape and hope for a while now. 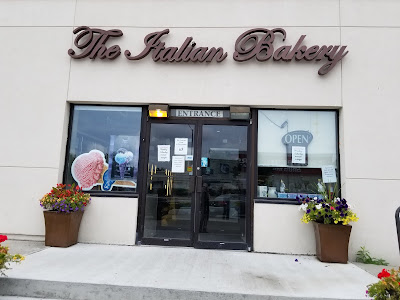 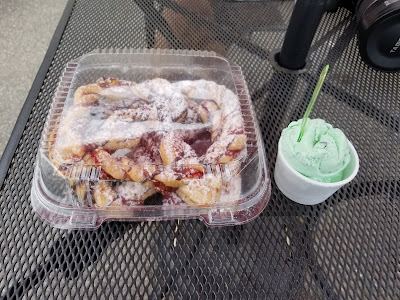 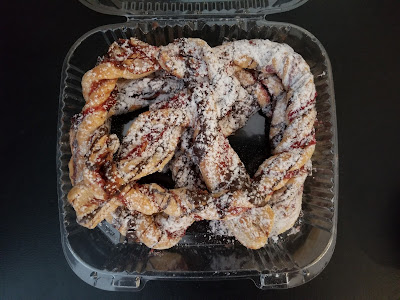 Just beside the post office we stopped at a lovely looking Italian Bakery. It turned out to look like a European market inside, and we enjoyed a wonderful chocolate and strawberry pastry, as well as two scoops of gelato. Even though it was a short and somewhat lazy day of hiking, it seemed fitting to end it with a stop at a bakery!

As we headed off the heavens opened and it began to rain heavily as we took refuge in a Subway Restaraunt and decided to purchase our dinner to enjoy on the trail (with the hope that the weather would pass while inside).  Here we chatted with a young gentleman who was working about our trek.  As we talked his interest rose and rose - with questions about where we camp, what we eat, and how long we had been on the trail coming quicker and quicker.  As our sandwiches were assembled we exchanged stories, and as we went to leave he insisted on buying us our ice teas for the evening!  Yet another kind soul in the world that we chanced upon.

With the weather clearing and the generosity of this gentleman in our minds we pushed to find a place on the edge of town for the evening.
Posted by Sonya and Sean at 9:58 PM