Now that we have arrived in North Bay after more than 1500 km of trekking across Ontario and more than 4500 km of hiking along the Great Trail from Cape Spear Newfoundland in 2019, we have a number of challenges to consider and which require that we find a resolution to. 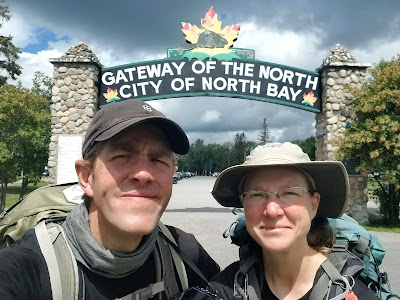 We are often asked questions like : What is the Great Trail like? Or what are the conditions on the Trans Canada Trail?

Each of these are difficult to answer for the very simple reason that the TGT is not a singular pathway.  Instead it is best understood as a collection – a huge collection – of independent and regionally constructed and maintained trails assembled into a national network reaching from the Atlantic to the Pacific to the Arctic Oceans.  It is a collection of connected trails which are constantly evolving and improving.  However beyond this loose definition, it is seemly not bound by a set of standards which hikers can rely upon from coast to coast to coast.  And it varies in accord with the geography, landscapes, and interest of each region and province we venture through.  In many of the sections we have traversed the trails are extraordinarily maintained routes dedicated to cyclists, day walkers, and hikers.  However in between there are admittedly pathways in the system which are better described as snowmobile routes and ATV trails which are theoretical at best, or maintained to other purposes, or which are seasonally dependent for safe passage.

For these reasons, in the past two years we have come to understand, that each section – and sometimes each community along The Great Trail has different obstacles and challenges that hikers have to overcome to get through.  In Newfoundland it was the wild terrain, in Nova Scotia it was lack of filterable water around the Bay of Fundy, in PEI it was the number of downed trees in the aftermath of Hurricane Dorian, and in New Brunswick it was the combined challenges of the Dobson and Fundy Footpath routes.  In Eastern Ontario and the GTA it was the extreme heat as we crossed rail-trails and urban pathways.  While in Northern Ontario it is to be the long stretch of roadway and highway which compose the Trans Canada Trail that make up the greatest challenge that we will face. From North Bay to Sault Ste Marie we have in excess of 500 km to traverse, with most of it on major roadways and highways. 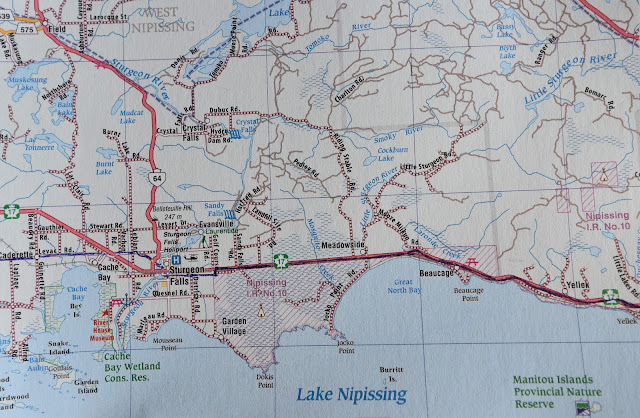 Our most immediate concern of course is the 211 km from North Bay to Sudbury along HWY 17 also known as the Trans Canada Highway across the region.   This highway – simply put is massive, busy and dangerous.  More to the point, the trail throughout this section is on the side of the highway.  There is no pathway here – or rather the ‘pathway’ is on the side of the highway.

As there is no comprehensive guide to the Great Trail we have read blogs, watched videos and reached out to people who have previously trekked down the Voyaguer cycling trail.  Their response has been almost unanimous and we have been told by cyclists and hikers alike that it is ‘extremely dangerous’  and that ‘the majority of the…[route]… is not safe for pedestrians’.  To best understand the conditions which face us perhaps this video – shot by Mel Vogel 2 years ago along this same route demonstrates what the next few weeks will look like for us:

With only a few exceptions – most notably the intrepid MelVogel (Between Two Sunsets) – many of the hikers who have come before us on the Trans Canada Trail have ventured onto the highway for a day or two and then abandoned the route as ‘wildly unsafe’ and ‘not a pathway by any definition’.

In our emails and phone calls with previous trekkers and cyclists we have been advised to simply take the bus entirely past these sections to the ‘actual pathways’ in Sudbury, Sault Ste Marie and the Northern Superior Parks.  We have, in all honesty considered this approach as there is a real and evident personal danger to this section.

It is, as one person we met would say, extremely unsociable.

So what are we to do?  Well we do what we have done so far, push forward – safely – and continue westward.  It is however, not an easy decision to make.

The recent stretches of endless concessions and road walking are hardly the most pleasant parts of our venture.  Actively engaging on a 5-7 day, 211 km stretch of highway is a daunting prospect.

Regardless, tomorrow morning we set out on the first 38 km of it to Sturgeon Falls along the Great Trail and along the side of the Trans Canada Highway.

Wish us luck – for the first time ever I think we need everyone’s prayers and best wishes with us.