The Actions of Good People (a follow up to ....all it takes is for Good People to do nothing.....) 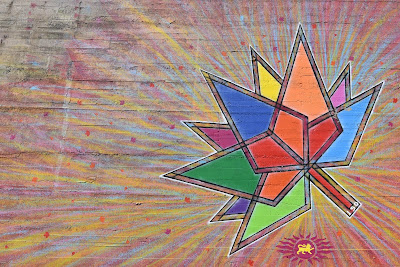 A week ago we encountered a harsh reminder that racism is not something which only exists south of the border. It is a problem here in Canada as well, as a series of racist and highly offensive posters we encountered and then removed from a section of the Great Trail in Waterloo clearly demonstrated.

Since posting about those events we have been encouraged by an outpouring of support for the removal of these messages. Several people who live in this community have come forward to volunteer their time to make sure this doesn't happen again in their neighborhood. We were also contacted by the local police, who are looking for information to help find the person or people who are responsible and to address the problem. We are highly encouraged by all of these responses.

As we hiked through Elora a few days ago we found another reminder that racism is a problem here in Canada, but this one was of a much different nature. This one was a beginning to the conversation we all need to have - even if it makes us feel uncomfortable - and which serve as a step towards beginning the healing process. 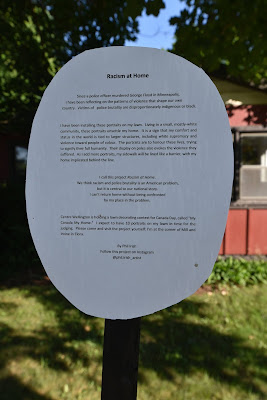 As we walked through the Elora neighborhood we came upon a powerful art exhibit in the front yard of Phil Irish, a talented local artist. As it was designed to do, it made us pause for thought. It was called 'Racism at Home' and included very beautiful painted portraits of victims of racist acts that occurred here in Canada. The paintings were placed on poles, arranged around the edge of the artist's home, facing out. It was meant to honour the lives of the victims and to celebrate their humanity, while making the largely white community, and the artist himself, experience the discomfort of recognizing what happened to them and why. Among the portraits were: 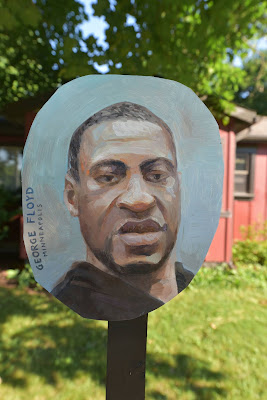 George Floyd. He was a 46 year old Black American man who was suffocated by police in Minneapolis, Minnesota on May 25, 2020 while handcuffed and lying face down on the ground after being arrested for using a counterfeit bill. This was the only person in the exhibit not to die in Canada. Dudley George. He was a 38 year old Ojibwa man who was shot and killed in 1995 by heavily armed police during the Ipperwash Crisis in Ipperwash Provincial Park, in Ontario. He was a member of the Stoney Point Ojibwa band who was peacefully protesting the takeover of his band's sacred ceremonial burial grounds for use as a military camp. 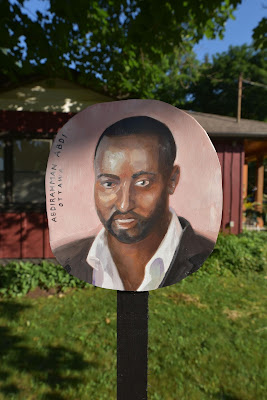 Abdirahman Abdi. This Somali-Canadian was beaten to death on July 24, 2016 in Ottawa. He was unarmed, running away from the police, and suffering from mental health issues when he was killed. 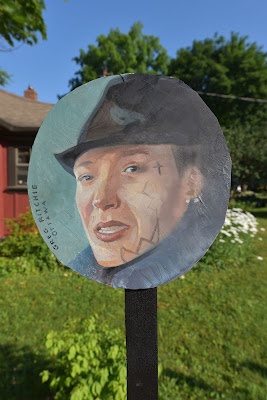 Greg Ritchie. He was a 30-year old member of the Saugeen First Nation near Owen Sound, Ontario who was shot and killed by police in Ottawa in January 2019. He was suffering from mental health issues and was on his way to the pharmacy to pick up his medication. 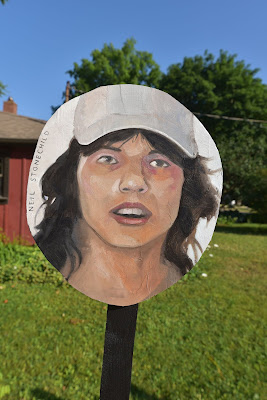 Neil Stonechild was a 17-year old Saulteaux First Nations teenager who died of hypothermia on November 25, 1990. His body was found in a field outside Saskatoon when the temperature was -28°C, and it is suspected that he was given the "Starlight Tour" by the Saskatoon police. A number of similar cases dating back to 1976 are collectively known as the 'Saskatoon Freezing Deaths', and it is suspected that they are the result of Indigenous people being taken out into the countryside during winter and left to freeze to death after being arrested for drunk or disorderly behaviour. 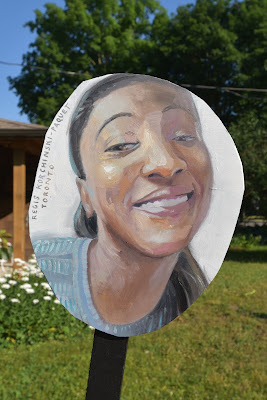 Regis Korchinski-Paquet. This 29-year old woman was an active member of her church, a talented gymnast and proud of her Ukrainian and Nova Scotian roots. She suffered from epileptic seizures, and fell from her family's 24th-floor apartment in Toronto on May 27, 2020, after police had been called to help and were inside the apartment with her.

In learning about the people Phil Irish painted, it seemed obvious to us that better access to mental health services is needed for all Canadians. Many of these stories involve people struggling with mental health or addiction issues, which the police aren't adequately equipped or trained to deal with. We need to create a more just, equitable, and humane society where marginalized and non-white communities don't experience elevated rates of poverty, stress, and discrimination as a result of racism, and we need to provide support for our communities so that violent and unnecessary death is not the only option for those suffering from mental health issues.

As so often happens on this trail, from one place to the next, the conversation continues. The exhibit gave us a lot to think about. In researching about each of these individuals we learned a great deal - often being both stunned and saddened both over how often these horrific events take place and the fact that they take place here in Canada on a regular basis. According to the artist's social media, these are the conversations that he wishes to ensure keep going and expanding.

We want to thank Phil Irish for presenting the stories and faces of these individuals and for fostering our discomfort - forcing us to actively rethink our own assumptions and understandings of our communities and nation.