The sun don't shine on the same dog every day : Huntsville to Compass Lake

We slept in this morning, enjoying the luxury of a flat camp site, a picnic table, a faucet with potable water, and a comfort station. As we lay in the tent we listened to the sounds of an Ovenbird singing across the river, a Song Sparrow right beside the tent, a White-throated Sparrow across the clearing, and a family of Blue Jays begging for food. The voices of small children started to join the mix around 7:30 am, and then the shouts of a woman trying to recapture an untrained German Sheppard by the name of Whiskey rang out across the campground. It was time to get up. 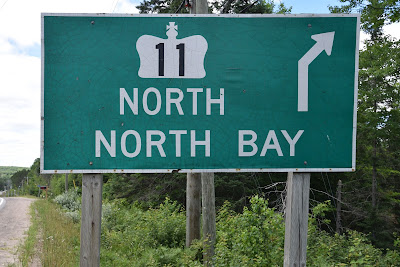 We headed out of Huntsville, across Highway 11. The weather forecast called for 2-4 mm rain, and all the traffic on the highway was headed south. We've spent many wonderful weekends in Algonquin PP in the rain, and never understood why people fled, but I can appreciate not wanting to be soaked, especially at the moment. 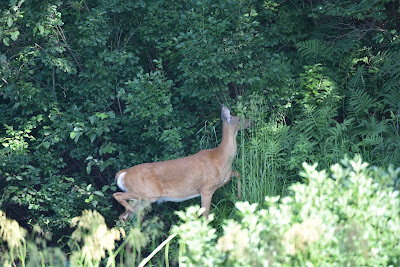 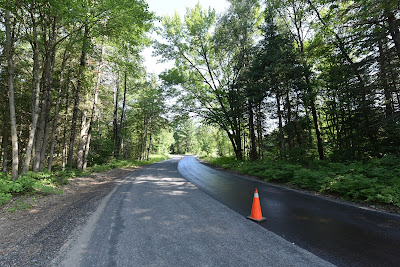 We turned onto the winding, paved road we were to follow until we picked up the Park to Park Trail. Almost immediately we ran into a construction crew. For the next 4.5 km the road was down to one lane, with the other side coated in a brand new layer of thick, oily, brown tar. We could feel the heat from the far side of the one remaining lane. Of course there was a lot of traffic.

Even though we've spent quite a bit of time in Algonquin, we never realized how sandy the soil is here. The meandering river we were following, with its iron rich reddish waters, was flowing between 3-4 m tall yellow sand banks. It was very colourful, and provided a beautiful contrast with the dark green cedars and hemlocks along its banks.

At one of the oxbow ponds, whose dark black surface was covered with yellow and white blooming lily pads we came upon a baby White-tailed Deer. It was still dappled with white spots and doing it's best to blend in. As if we needed a reminder, wildlife really is everywhere - you just have to get outside and look! 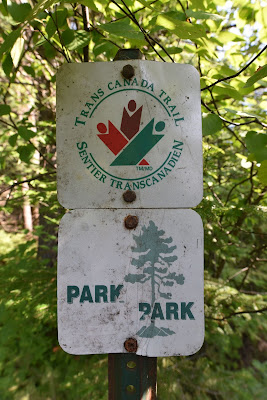 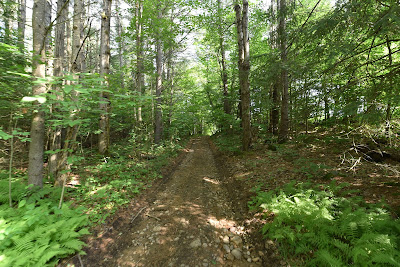 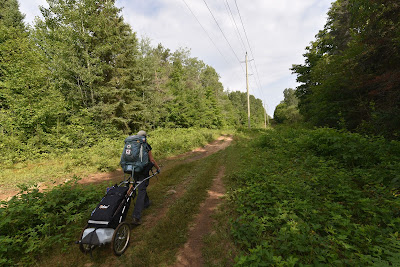 After about 5 km of road walking we joined a small section of the Park to Park Trail. This trail is 230 km long, connecting Algonquin Provincial Park with Killbear Provincial Park. It is a multi-use trail, for hikers, cyclists, and ATVs in summer and snowmobilers in winter.

The hilly, winding, dirt trail was beautiful, taking us through maple, beech, and birch forests, and through numerous marshes and wetlands that were bordered with exposed granite outcroppings and coniferous forest. It was an established trail, although very rocky and uneven in some places and clearly well used by ATVs. 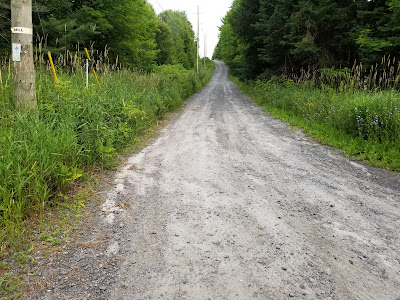 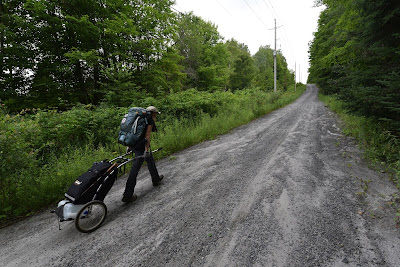 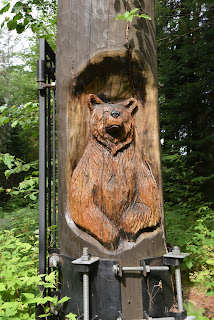 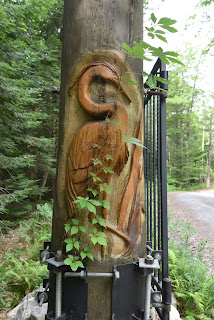 As we walked, the sky grew darker and darker. When it finally started to rain, we chose not to put full rain gear on, because it was 24 °C out, and not that much rain was forecast. That turned out to be a bit of a mistake. It poured without pause for the next five hours straight, leaving us completely drenched to skin. 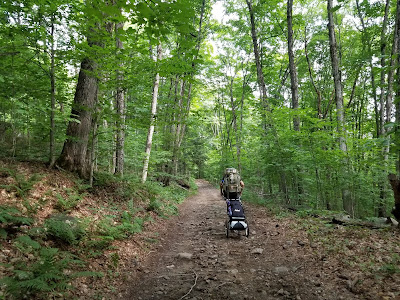 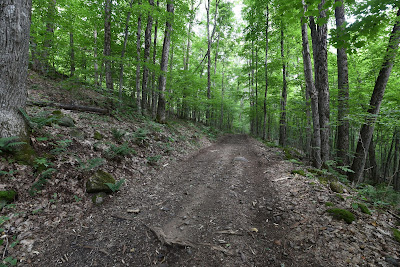 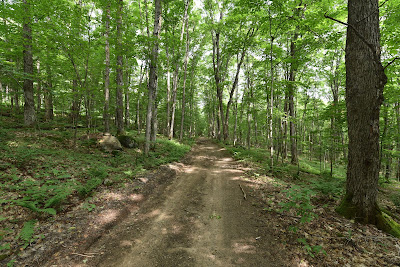 Despite the rain, it was a beautiful walk. A Wood Thrush sang joyously from the surrounding forest, as if welcoming the rain. He was joined by the loud call of an Ovenbird, and the soft 'Zur-zee-zee' of a Black-throated Blue Warbler. A pair of Red Squirrels chased each other spiritedly across the forest floor. Along the way we spotted another young deer and its mom. 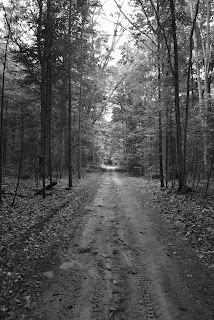 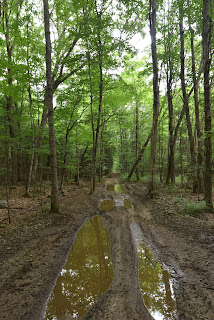 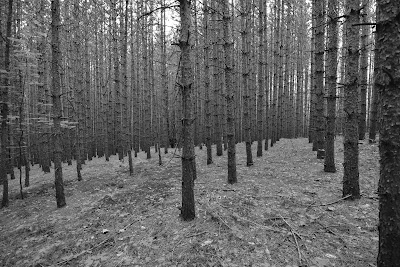 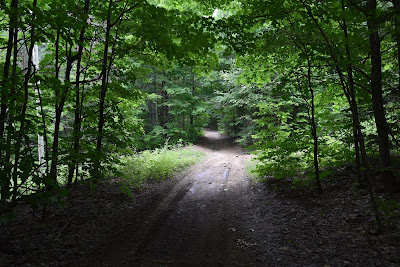 After the gorgeous section of deciduous forest we emerged onto Long Lake Rd, which true to its name, followed a very long lake. This road was lined with cottages, houses, and private property but it was pouring rain, so not many people were out and about. One exception was two young girls and their mother, whose laughter we could hear across the lake. They were out enjoying the shower in a small rest area along the water's edge.  Unfortunately, as the mother was quick to point out, we were unable to take a break in this same space owing to Covid restrictions.  Tired, we continued on down the road. 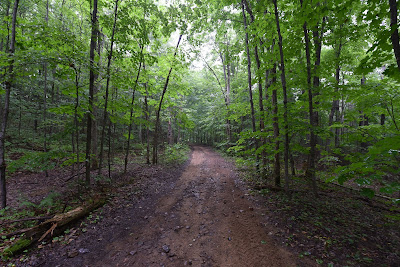 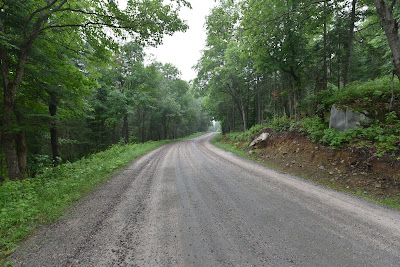 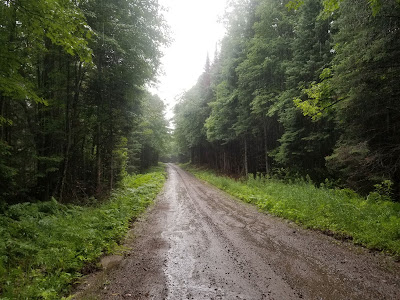 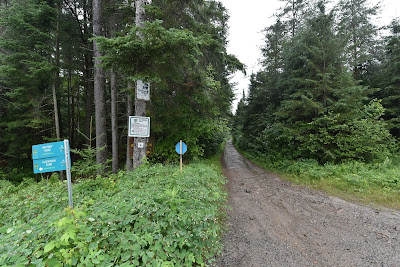 We continued down this long, winding, gravel road, and then a few others for about 10 km. It rained so hard at times that we thought of stopping and putting up the tarp to take shelter, but although both sides of the road were bordered with cedar, spruce, hemlock, and white pine forests, the only areas that weren't posted as 'No Trespassing' were the marshy sections. A lot of the road was parcelled off and listed For Sale, indicating that development is coming to this area. It seems that here, even the forests down old country roads are being cut up and commoditized. 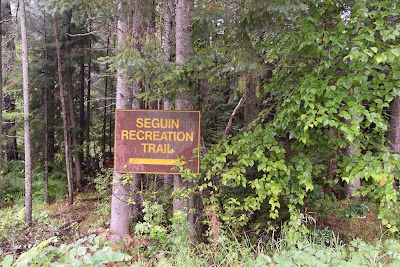 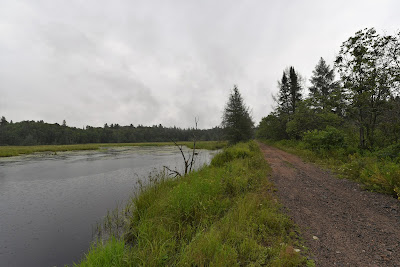 We plodded along in the rain, enjoying the landscape, but by mid afternoon we were both somewhat dismayed at the lack of a break in the deluge. At one point a lovely, large, dark grey weasel poked its head out of the grasses at the side of the road, saw us, grunted loudly, and fled back into the undergrowth. Sean shrieked at the size and sound of the unusual creature when it startled us, probably half giving it a heart attack.

Finally we turned onto the road where we would pick up the next section of trail. It was a winding gravel road leading down to a gravel pit, and several large trucks passed us on the way in. 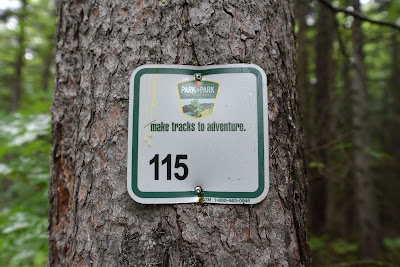 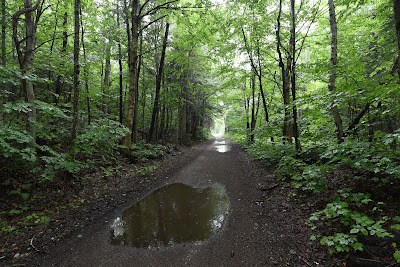 About the time are backpacks stopped repelling the rain and began to collect it,
we picked up the Seguin Trail, which is the next part of the Park to Park Trail. Once off the road we discovered a lovely sandy track. It was a bit difficult to pull the cart through the deep sand, but generally it was very nice. This trail also took us through beautiful coniferous forest, and between lush, green, wet meadows and cattail marshes. At one of these a large, healthy looking deer was standing a few meters from the trail. As we approached, it let out a huge huff, and jumped on spring loaded legs back into the bush. This encounter brought our deer sightings for the day to six.

As we crossed another beautiful marsh with dark standing water, bright green cattails, and purple flowers, we noticed a Great Blue Heron standing on the trail, staring at us. When we were about 5 m away it finally took flight, flapping and gliding low over the lily pad covered pond. Neither of us have ever been so close to a Heron before! 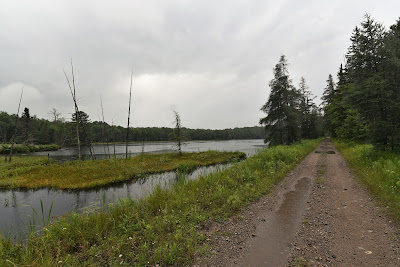 At the far end of the pond we spotted a stand of hemlock that looked like a good place to camp. We are pretty close to the highway again, and we wanted to stop before we got to it. We pitched the tarp in inland amid the pouring rain, and then set up the tent beneath it at the side of the trail, a few meters in from an unused looking gravel track that resembled a small stream. 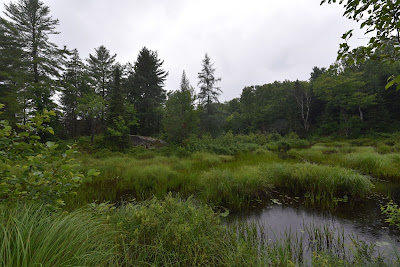 As we sat in our quickly constructed shelter, stripping off our soaking wet clothes and trying to warm up, a Jeep drove down the trail and turned up the track. This was only the second vehicle we'd seen in over five hours. This was followed by two guys in a golf cart coming down the track and turning onto the trail, heading in the direction of the highway. It was still pouring, but they were in shorts and t-shirts, and looked like they were out on the back 9. Shortly after that three more pickup trucks drove down the tail and turned up the track, which must lead to Compass Lake Then the golf cart folks came back. It seems that after an entire day of seeing almost no one, in the middle of a rainstorm and the middle of nowhere, we've managed to find the only major wilderness intersection at which to camp.

It seems that after 225 days on The Great Trail, we were due for a challenge day of rain and some tough trail conditions.  The sun don't shine on the same dog every day.  We'll see how tomorrow goes.