When we woke up this morning it was so dark we assumed the sun wasn't up yet. We knew that severe weather and 50 mm of rain were predicted for today, but somehow we didn't expect the day to be quite that dark. It still seemed like nighttime at 7:30 am.

It was a very slow morning getting ready to head out, both because we were still exhausted, and because it felt like we were moving through mud. The humidity seemed to keep building and draining our energy as we made our way into downtown, and it was already over 35°C by 9:30 am. 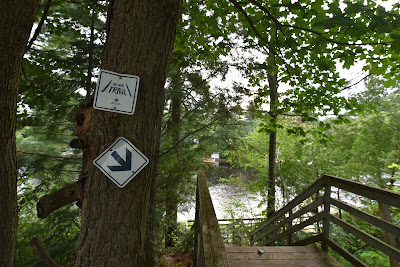 The paved Trailway into downtown Bracebridge took us along the north branch of the Muskoka River.  It initially wove us down a long set of wooden staircases onto a beautiful shoreline boardwalk.  We walked along a winding paved pathway between a row of 2-3 story tall brick condos with beautifully landscaped decks and a wooden pier with boats, kayaks, and colourful inflatable swans docked alongside. 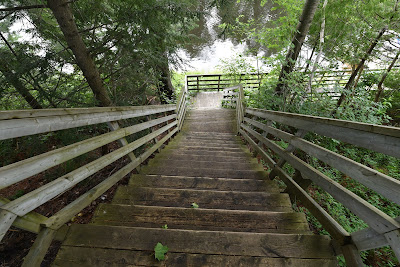 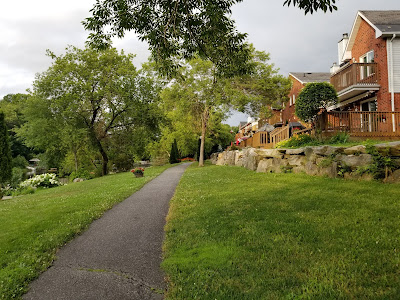 When we got to Kelvin Grove Park we heard thunder rumbling above, and occasional flickers of sheet lightening began to appear in the sky. We had stopped to look at the Trans Canada Trail Pavilion in the park, and admire a piece of rock art when the skies opened up and it began to pour. 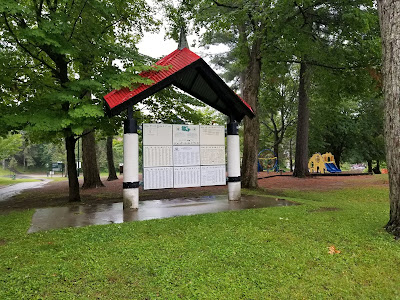 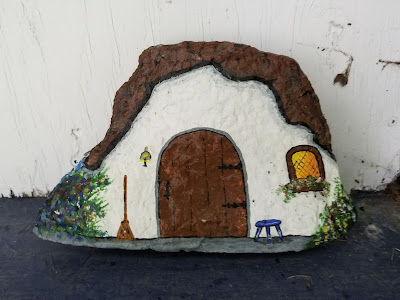 We waited under the trees in the park for a bit, but the rain only seemed to increase. 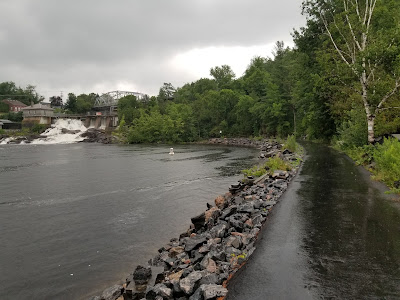 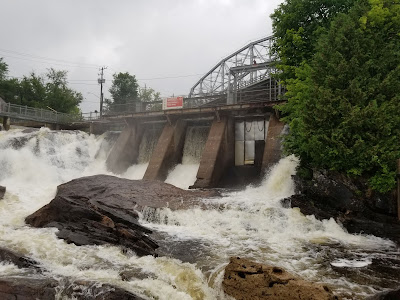 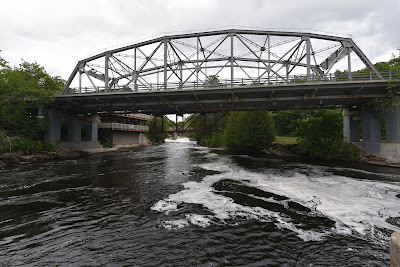 A set of steps led back down to the river level, and the treed shore rose steeply up on one side of us to the road. Across the river we could see a couple condo towers, a park, and neighborhoods. As we rounded a corner we came to the dam. With the torrential rains the water was flowing through the dam and over the rocks below with enormous force. There was an intriguing abstract metal statue that brought mermaids and canoe paddles to mind at the bottom of the falls, as well as a water wheel. 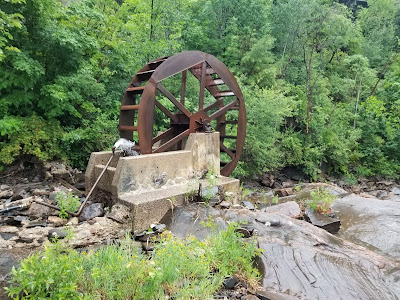 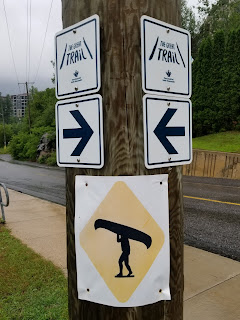 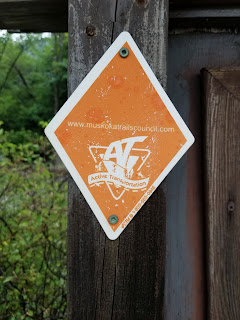 The trail crossed the dam and led under a road. We paused under the bridge, out of the rain for a few minutes and read the creative graffiti left on the walls. The rain didn't let up. Apparently we were right beside the Bird Mill, which is now a tourist information office, but was once a wool mill in the mid 1800's. 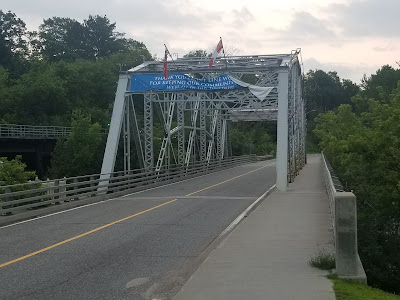 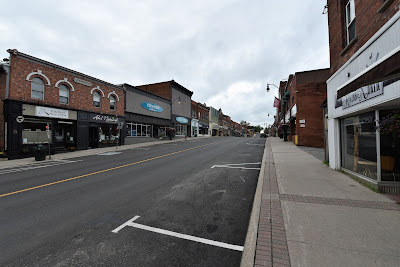 Despite the rising winds we continued on through the main street passing artwork in the public gardens, getting an opportunity to visit the Memorial Fountain in the downtown park and pay our respects at the Veterans Memorial. 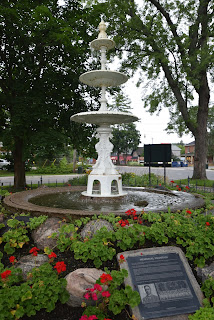 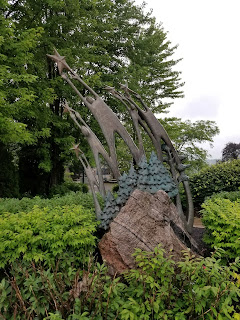 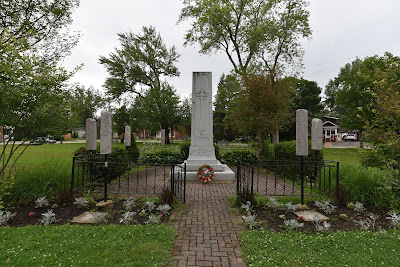 We walked the main street as far as a Oliver's coffee shop, which was open and allowing people to sit inside. As we sat there enjoying a cup of coffee for as a long as humanly possible, and watching the rain pelt down outside the window, we got an emergency alert from Environment Canada on the phone warning of possible tornadoes in the area.

With that we decided to stay in Bracebridge for another day, to rest, get caught up on the blog, and hopefully avoid the worst of the weather.   Yet again going into lodgings led to us being punished.  Arriving back at the hotel we were charged for 'early access' to a room given that it was 12:30.  While we initially grumbled and simply went to our quarters we were soon amazed to discover that despite the warnings flashing on TV screens and coming across on phones in the region, that families who refused to pay the 'early check in fee' were told to stay in their cars.  Nothing makes you feel more selfish than watching a single mother with 3 very active children sit in a mini van as the skies go jet black and realize how privileged you are to be able to afford splurge on the extra fee at that moment.  We fully realize there will be times on this hike when we run into severe weather and will not be able to seek shelter to avoid it. Staying put today is a luxury, but one we chose to take to avoid the heat, humidity, and immense amount of rain.

After checking into a hotel for the second night in a row laying out all of our gear (now sodden), and writing for a few hours, the weather seemed to lift somewhat. We headed back out to pick up some supplies, only to have the skies open up once again. It was still so hot outside that getting soaked wasn't necessarily bad, but we were nonetheless glad to not be struggling through a raspberry infested hydro corridor or snowmobile trail in that much water.  It also meant that our one set of dry clothes was now wet too. Sigh. 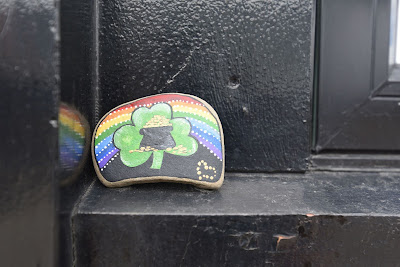 As we walked through downtown Bracebridge we noticed a few changes. Marty's World Famous Buttertarts has been replaced with an Irish pub. The bookstore we went to for the release of one of the Harry Potter books is also gone. Things inevitable change, but we were happy to see that the main street was still lined with many locally owned and operated businesses.

We've noticed a few other changes since walking back into cottage country. About 25 years ago we both had wealthy friends with cottages on lakes in this region. At that time most cottages were small. When you arrived someone had to turn on the water pump, fire up the generator, and maybe open the shutters. The interiors were filled with mismatched furniture that had to be aired out to get rid of the musty smell, and hand crafted art decorated the walls. There was a wood stove and no AC. There were no TVs, no telephones, and definitely no internet. We spent days paddling canoes or row boats, swimming in the lake, or exploring local trails on bikes or on foot. If it rained there were board games, card games, books to read, or guitars to play. A lot of time was spent just talking around a campfire or on the dock, under the stars. We were free to explore, discover, and learn about ourselves and others.

The cottages of today seem to be large, fully equipped residences with every modern convenience imaginable. We see docks with power boats, seadoos, kayaks, and SUPs. Garages are filled with ATVs. I'm sure this outs me as the crotchety old foggy I'm rapidly becoming, but it seems to me that the point of a cottage was to 'get away from it all.' It was a sanctuary where you couldn't be reached, and you escaped the demands of a fast-paced, mechanized world. It was quiet, more tasks were done by hand, and things moved more slowly. You learned to improvise and expand your comfort zone. It doesn't seem to me like cottage life involves unplugging, disconnecting, or slowing down anymore. As an outsider, it looks just as coordinated, decorated, designed, connected, and high-maintenance as a primary residence. 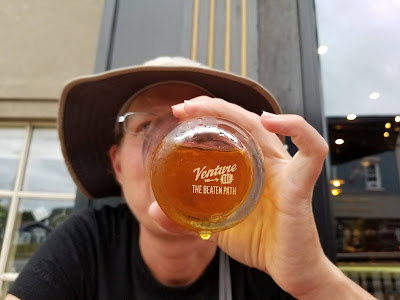 In any case, Bracebridge is a beautiful town with a lovely park, historical main street, and riverside walk. We loved spending a day here, especially since it let us avoid the rain. As I write this, the skies are still dark, but it feels like the sun is trying to make it's way through the clouds. Tomorrow we push on towards on Huntsville, hopefully in cooler weather