Today was a slow day in which we covered very few kilometers, but got a lot of chores done and did some relaxing. First, and most importantly in our view, was visiting the coin laundromat and removing the swamp from our clothing (see previous entry for introduction of swamp to our clothing, gear, and persons). This task accomplished, we set out across town around 10:30 am. 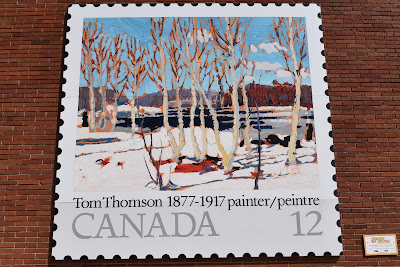 Huntsville is the largest town in the Muskoka region, and has become a major tourist destination for people from all over Canada. It offers a world class golf course at the Deerhust Inn, as well as many amazing opportunities for boating, kayaking, canoeing, ATVing, and snowmobiling, and many other types of recreation. It is also the gateway to Algonquin Provincial Park, which is a popular place to camp for people from Toronto and Ottawa.  We have both spent a great deal of time in this region, Sean while spending summers at camp there as a child and Scout and later while golfing at Deerhust with his cousin as a teenager. 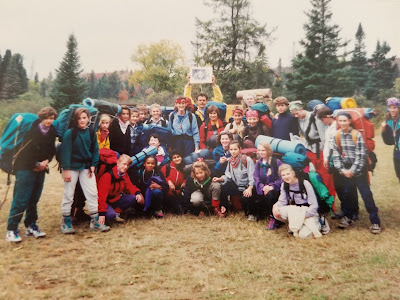 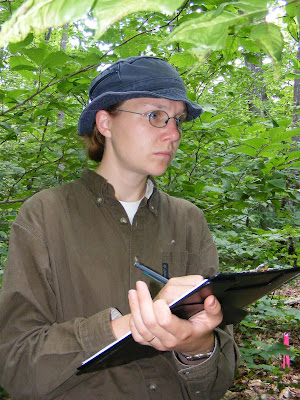 I similarly spent time in Muskoka as a youth going on a number of trips with the Toronto Waldorf School!  Later I would return, completing much of my graduate research over the course of many years both Trent University and the University of Toronto in Algonquin Park working at the Wildlife Research Station (WRS) near to the Lake of Two Rivers in the heart of park along HWY 60.

The land around the Muskoka region, which is now known as cottage country to many people, was once the traditional territory of the Anishinabek (ᐊᓂᔑᓈᐯᒃ), Huron-Wendat, and Odawa Peoples. It is located on the Canadian Shield, with the exposed granite outcroppings, windswept White Pines, and numerous small lakes.

As we were getting ready this morning we were honoured to discovered that the Huntsville Public Library has shared our story. This was done by Julie, whom we spoke with briefly last night. We were delighted to discover her blog, called State of the Dog, that is written from her canine companion's point of view.

As we set off down main street a lady in a purple car honked and waved enthusiastically as she passed us. We greatly appreciated the encouragement, and it was a lovely, upbeat way to start the day. 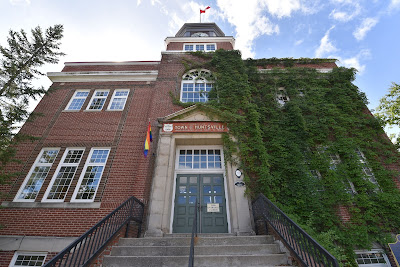 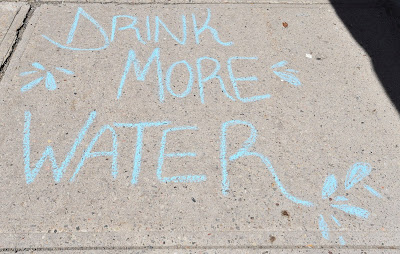 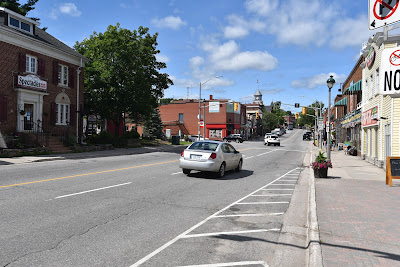 As we followed the trail down Main Street we passed familiar sights, like the Nutty Chocolatier and Algonquin Outfitters, where we stopped to pick up a few resupplies. Throughout downtown we noticed murals showing Group of Seven Paintings. They are part of an Outdoor Art Exhibit featuring 80 world-class reproductions of Tom Thomson's and the Group of Seven's works. The Group of Seven consisted of seven Canadian landscape artists that worked together from 1920-1933. Some of their most famous pieces were painted in or near Algonquin Park, and they have come to define how we perceive and think of nature and the Muskoka region. 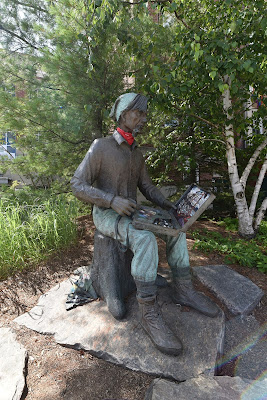 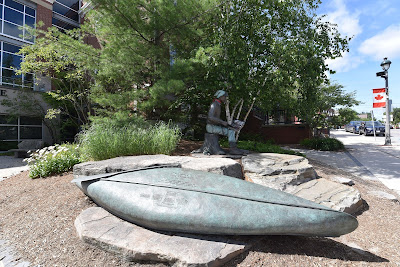 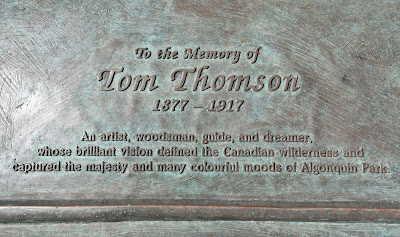 As we made our way through town and across the central bridge we saw many new businesses and restaurants. The downtown seems to have expanded, and reflects a more consistently up-scale, touristy vibe than it did ten years ago. Boston Pizza now has a riverfront patio, and Starbucks has a location on Main St. 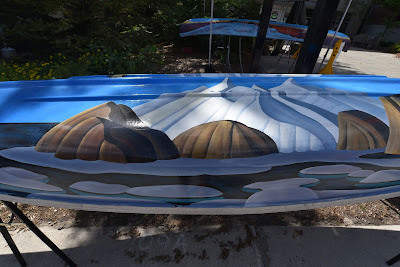 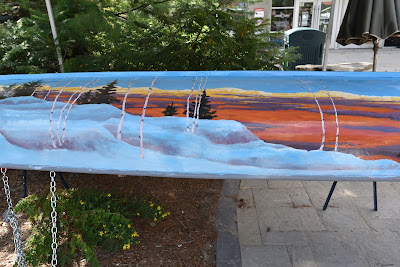 We visited the bank and the grocery store at the far edge of town before attempting to rejoin the trail again. When we did we found construction - a new development of lakefront condos was being built along both sides of the trail. Thankfully, a very helpful member of the construction crew indicated that we could go through the site and pick up the trail at the other end. 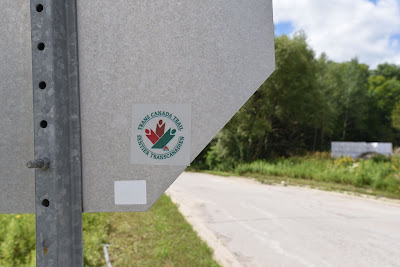 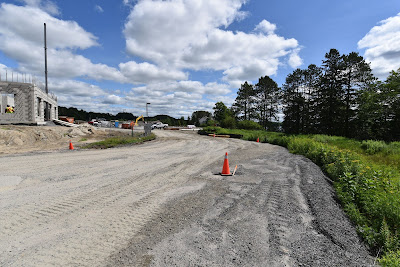 A small footpath led us to the 3 Guys and a Stove restaurant. This unique restaurant offers one of the best breakfast platters ever - with quiche, bacon or ham, eggs, potatoes, toast, and grilled tomatoes. Or at least it used to when we would stop in for weekend brunch in the days of old. 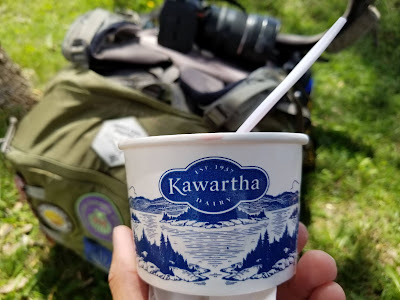 From there we crossed the street right at Kawartha Dairy, so of course we had to stop for ice cream! The "small" portions include about a pint of ice cream - too much to fit on a regular cone. This place also brought back fond memories of travels from years ago with younger family members. We ended up speaking with a lovely family while we enjoyed our ice cream under a shady tree in the parking lot. 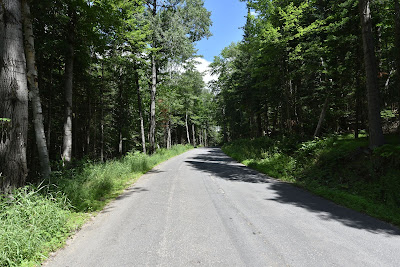 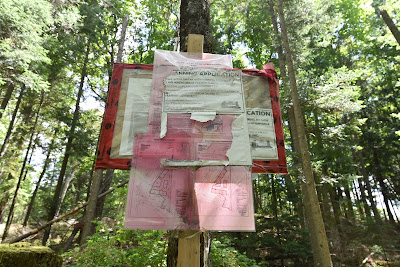 As we followed the trail north from there up into a residential section.  Here just as we were beginning to think that we had escaped back into nature we discovered signs and city plans on almost every plot of trees.  So here too nature is in the process of being plotted out, sold off, and developed.   More than this, each of the sites which had already been sold off were almost clear cut with huge new houses on them.  It has always amazed both of us that people would spend small fortunes to live in such a naturally beautiful region and then begin transforming the region by eliminating all of the trees and nature on the site. 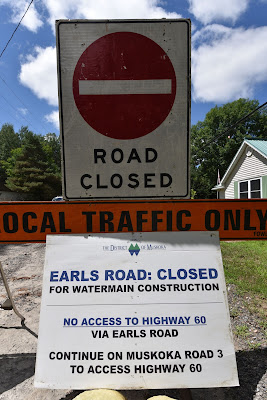 Again we continued on only to come to more construction. This time the construction crew members said there were two water mains out, that the road was impassible (even by foot) and we wouldn't be able to get through and could not be allowed to pass. As a result, we followed Muskoka Rd 3 out the north end of town, to the Lagoon Tent and Trailer park. 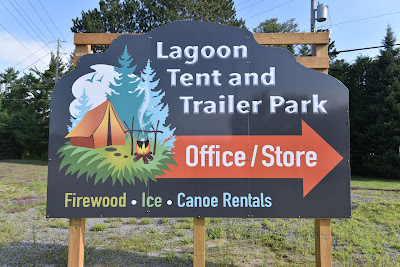 Arrowhead Provincial Park is just up the road, but in addition to being 4 km off the trail it seemed to be full, with no reservable sites left. Rather than taking the risk of an 8 km round trip to no purpose we checked in to the private campground. 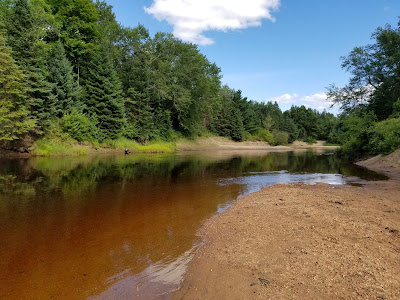 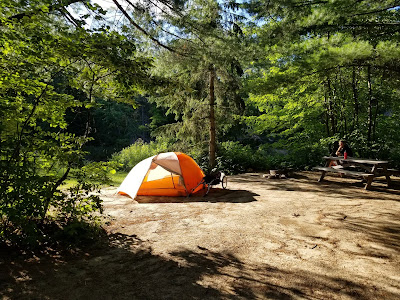 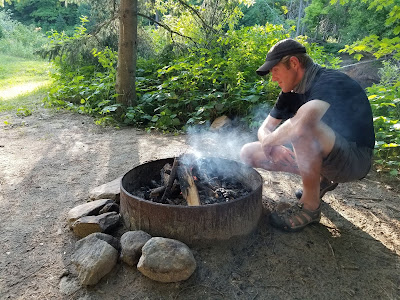 We were given a lovely campsite under a pine tree right on the banks of the river. It was a perfectly flat, sandy site, and we greatly enjoyed having a picnic table on which to make and eat dinner. Freakishly, there we no biting insects in the campground at all, which we also enjoyed. Tonight was our first campfire this season! 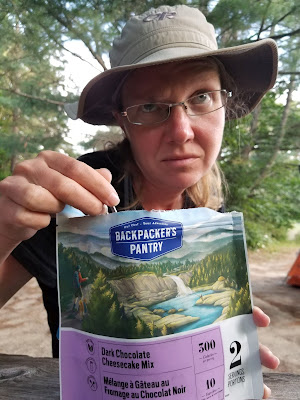 As we fall asleep we can hear the happy sounds of children playing in the campground, dogs splashing around in beautiful sandy river, and other people's campfires crackling away. It feels good to be a part of this happy place, where people come to enjoy themselves, spend time with family, and relax. 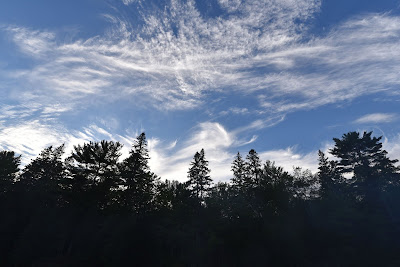