When we awoke this morning the world was wet with dew, and the sun was just beginning to make it's way above the horizon in a partly cloudy sky. The soft chips, calls, and tweets of migrating songbirds surrounded us once again, and when we looked up into the sky we saw another continuous stream of moving birds. It was a magical morning!  We where alone on the top of a magnificent vista overlooking Lake Superior, the Provincial Park and Thunder Bay!  Even though packing up our wet tent and clothes wasn't too appealing the realities of our fully drenched gear could not take away from the beauty of the moment. 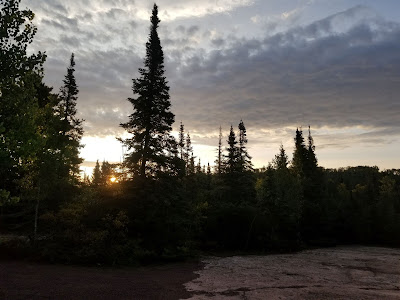 Our campsite was in a sheltered spot, but when we ventured back to the lookout for another peek at Thunder Bay across the water, it was quite windy on the cliff edge. This morning it was clear enough to make out the city on the horizon, and in the distance we could see the peninsula we've just spent two days walking along. Seeing the panoramic landscape from such a height was a bit dizzying. 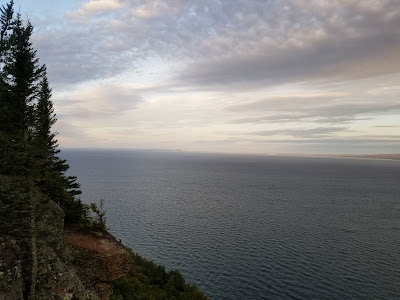 Although the Kabeyun Trail ends at the Thunder Bay Lookout, the Great Trail continues north for another 20 km to Pass Lake. From there we must continue on for another 6 km to the Trans Canada Highway before finding our way back south to Thunder Bay in order to continue west.

As such our day began with us trekking out of the 'parking lot' for the Kabayun Trail on unexpectedly vibrant pink and red rock of the landscape towards the nearby roadway where the trail continued northward. 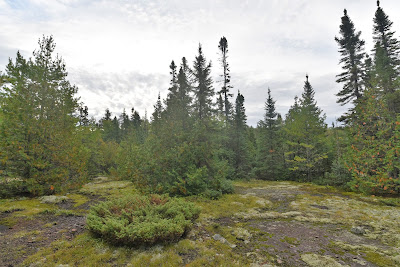 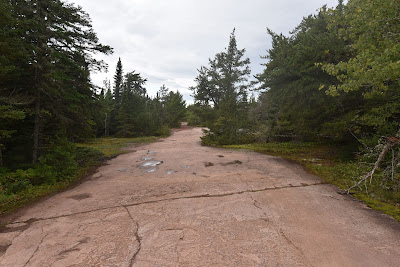 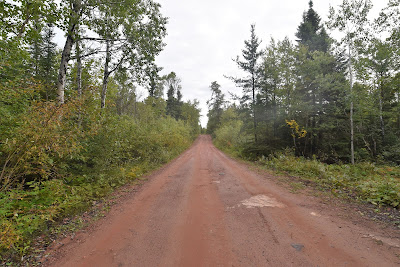 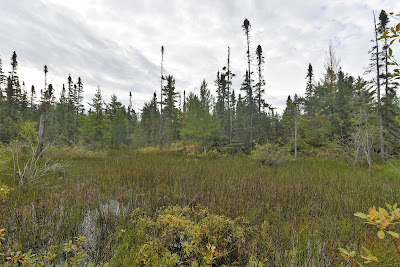 The remaining trail is an old fire road, which we spent the morning lazily walking along. The road was a very wide, gently rolling, grassy track. There were a few downed trees along its length, but otherwise it was kept in pristine condition, which was a bit puzzling, since it didn't look well used. 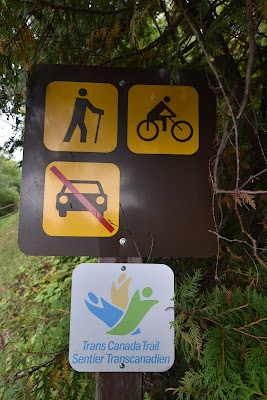 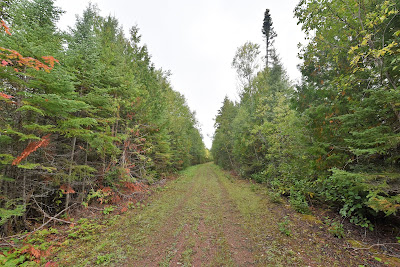 Most of the day we spent walking between walls of trees, with little variation in scenery. The leaves were beginning to change colour, and the reds and yellows along the edges of the trail were very beautiful. 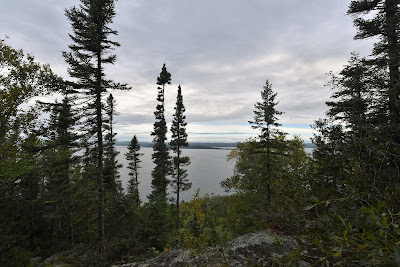 One of the highlights of the morning was spotting a Red Fox trotting down the trail in front of us. It had a huge bushy tail, and was carrying something the size of a rabbit, but the dark grey colour of a mole in its mouth. Unfortunately, we only got a fleeting glance before it rounded a corner and was gone. 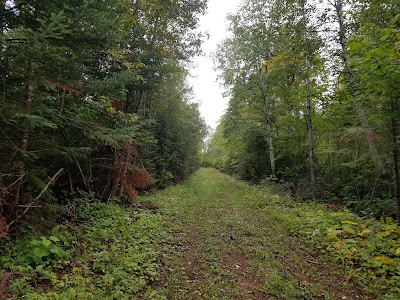 A short while later Sean turned around and looked behind us, only to see the large posterior of a Black Bear disappearing into the bushes. It seemed to be travelling at great speed in the same direction as us, so for a while we stayed alert and on the lookout, but that was the last we saw of it.  The true wonders of nature seem to pass us by in a flash leaving only a memory and the hope of encountering them again. 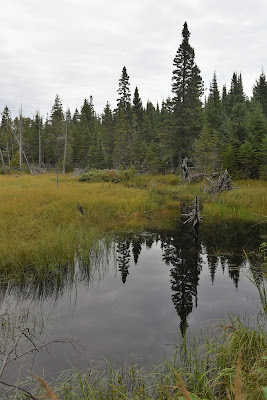 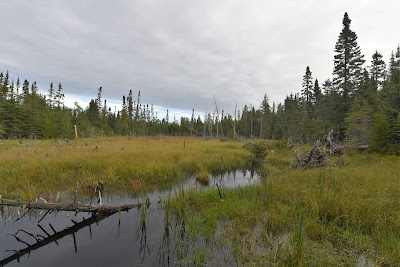 A bit later in the morning we came to an open marsh. There was a band of black, deep, still water running through it. A piece of driftwood provided a beautiful reflection in the dark water. Hundreds of birds were moving about in the tall grasses, and among the snags. White-throated, Song, and Swamp Sparrows hopped about in the tall shrubs and grasses. Flycatchers paused for a few seconds on the snags as they passed through. Yellow-rumped, Black-throated Green, and Palm Warblers foraged in the trees as they moved around the edge. Everything seemed to be in a hurry, and their frenzy was not lost on us.  The chirping seemed to mirror our own thoughts amid the changing colours of the forest around us - winter is near, go, be quick! 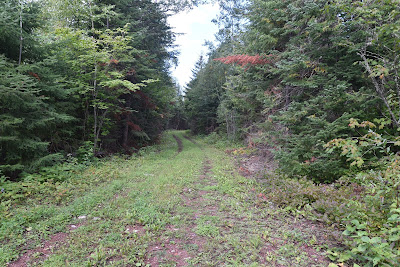 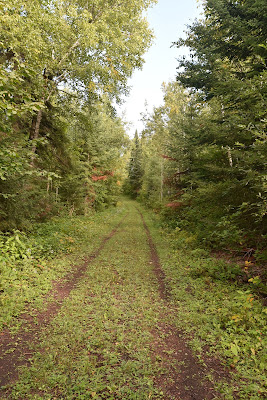 Overall it was a day of appreciating the small things. A shaft of warm sunshine that broke through the clouds and tried to dry everything out. A butterfly fanning its wings on the branch of a downed tree. Moose tracks down the middle of the road. A Northern Flicker foraging for ants on the side of the trail. A Broad-winged Hawk being pursued viciously by two Sharp-shinned Hawks in an impressive aerial display. A Song Sparrow that hopped for about 500 m down the trail in front of us, clearly under the impression that we were chasing it. We would stop, and so would the bird. We tried to convince it to fly sideways into the bush. It was having none of it. So, together we travelled for a while. 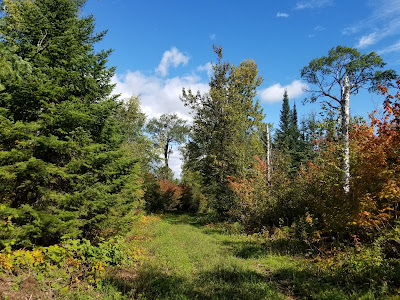 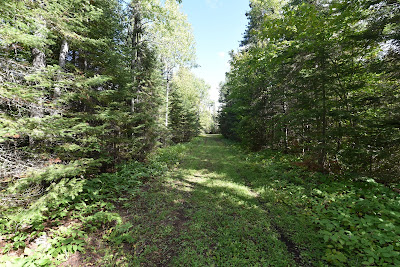 Right before we reached the end of the track we came to a lookout over Lake Superior.  We could see the mainland, stretching off into the distance towards Thunder Bay, as well as part of the coastline we walked. 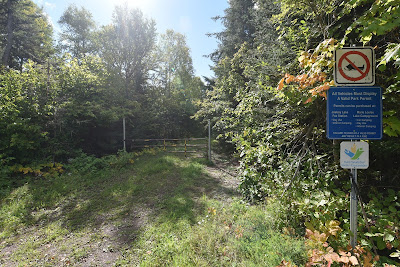 Eventually we reached the long, winding, paved road that leads through the community of Pass Lake and down into Sleeping Giant Provincial Park. This point marked the end of the Great Trail until it picks up again in Thunder Bay.


As we headed towards Highway 17 (the Trans Canada Highway), we passed a historic plaque to the Aqua-Plano Indians of the Upper Great Lakes. These were the earliest known people of the Great Lakes Basin, who earned their name because they migrated from the western plains to the beaches of glacial and post-glacial lakes in this region about 9000 years ago. Their culture involved big game hunting, which they achieved by using specialized tools and weapons made of taconite. In 1950 an archaeological dig found evidence of their existence in this area. 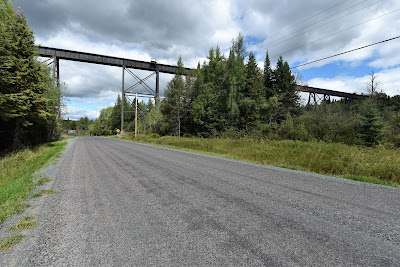 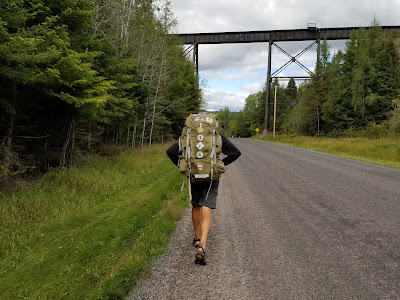 As we wound our way up to the highway we walked under the Pass Lake Trestle Bridge. This very impressive structure was built in 1916, as part of the discontinued Kinghorn railway from Longlac to Thunder Bay. It is now an abandoned CN railway line, and apparently at one time people walked across it! It is one of the longest and deepest trestles in North America, and it doesn't have railings. A hike across it would definitely not be for the faint of heart. 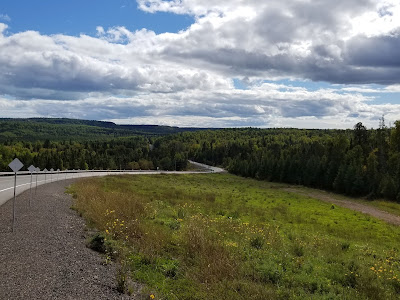 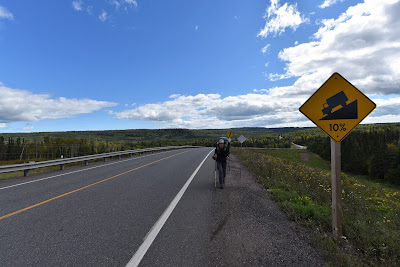 It was a steep climb up to the highway, and when we turned around and looked back we saw a beautiful green valley stretching out below us. It was a beautiful way to end this section of the Great Trail.

While today's hike was a relatively easy venture down a grassy corridor and along a gentle concession road, the 3 days of hard trekking have unexpectedly taken their toll on our feet. Our new (unbroken in) shoes and sandals have reminded us that at times it is better to go slow than to push forward.  The result is that Sean is in the process of loosing 6 toe nails and has very bloody feet. Yet he hobbles on. 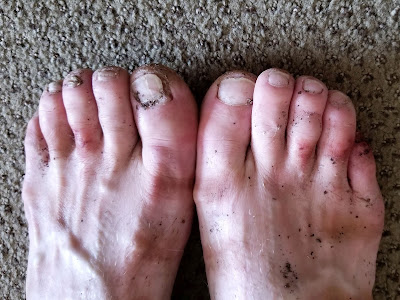 Fortunately his spirits are high and he keeps joking that it is merely the season saying 'that the skies are full of birds, the trees are full of song, and just as the animals move on so too must the toe nails migrate as well'.  I just try not to look at either of our feet!  Socks are beautiful and hide many unsightly things.