Goodbye to Ontario : Kenora the final trail in the province of Ontario

Today we walked the most western section of the Great Trail in Ontario, which is 11 km long and located in Kenora, Ontario. It took us six hours on the Ontario Northland bus to get here from Thunder Bay, and along the way we crossed into a different time zone. The landscape east of Fort Francis was hilly and forested, with numerous lakes, rivers, and marshes. The reds and yellows of the fall colours were partially shrouded in fog, creating mysterious landscapes like paintings. West of Fort Francis the landscape flattened out for a bit, and we passed through an agricultural region that could have been in southern Ontario. Around the Lake of the Woods we found ourselves back in a Boreal landscape once again. 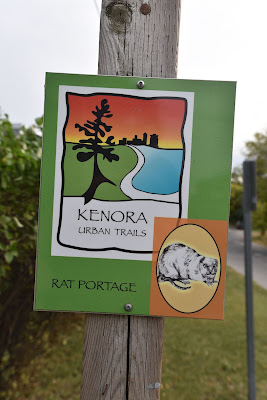 Lake of the woods is bordered by Ontario, Manitoba, and Minnesota, and is 110 km long and wide. It contains more than 14,552 islands and 105,000 km of shoreline. It is the sixth largest lake located at least partially in the US. One of the exciting things for us was that some of the islands in the Lake of the Woods provide breeding grounds for large groups of American White Pelicans. There is also a large population of Bald Eagles in the area. Sean spotted a group of Pelicans from the bus as we drove past, but so far I haven't had any luck. 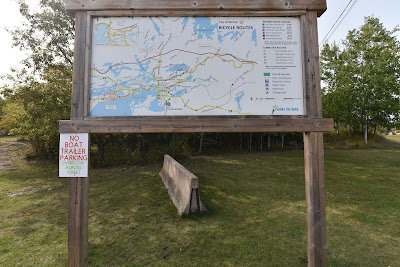 When we got off the bus we walked down to the Anicinabe Campground, which is where this section of trail starts. After setting up the tent we followed the trail out of the campground and through a quiet residential neighborhood. From there it brought us to a picturesque and historic downtown. 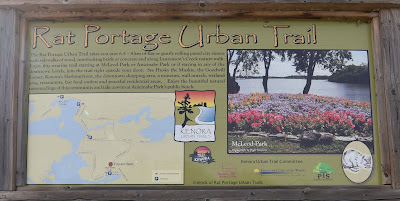 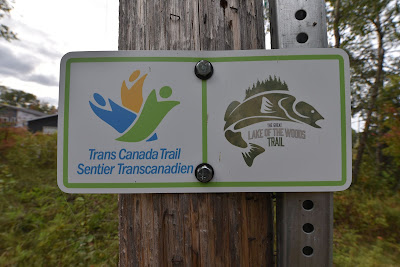 Just before we reached the downtown area we passed the skate park, which was absolutely full of very young skateboarders. At the edge was a mosaic created from clay tiles that had been individually sculpted and painted. The topics of the tiles ranged from hockey, bicycling, hiking, and canoeing, to moose, cats, and turtles, and included many skate park themed tiles. Some of the handcrafted tiles were broken and missing, but it was a very interesting project nonetheless. 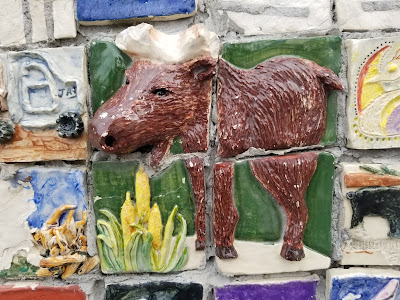 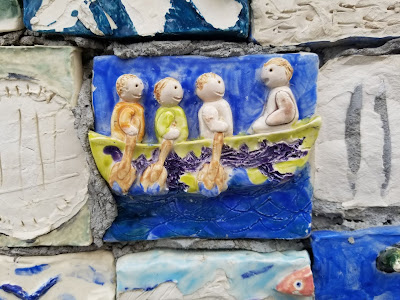 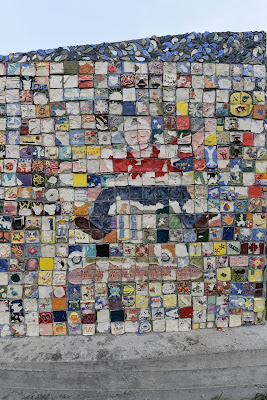 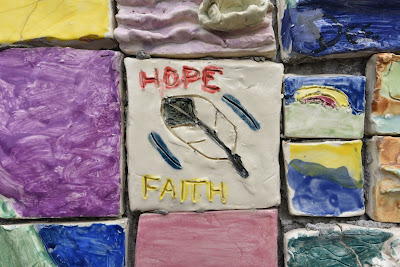 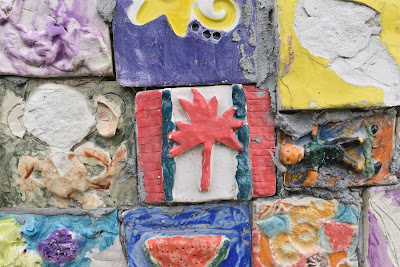 When we reached downtown Kenora, we discovered that a lot of the buildings along the main streets retained their old brick exteriors, complete with the painted signs of the old businesses. The downtown was an interesting mix of old and modern, creative and functional. 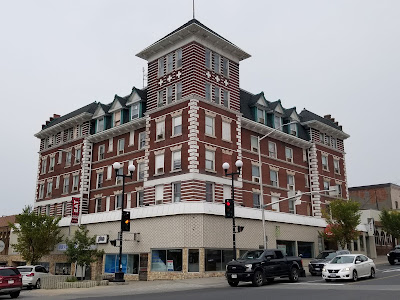 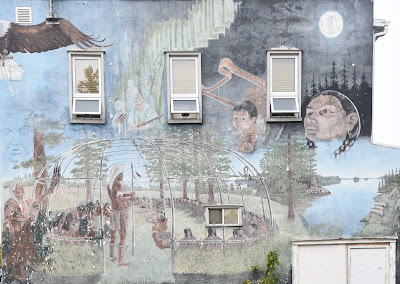 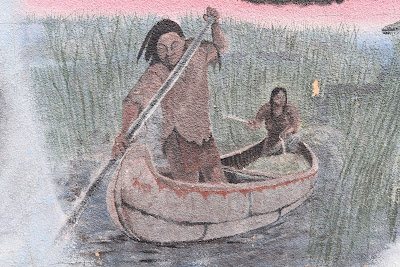 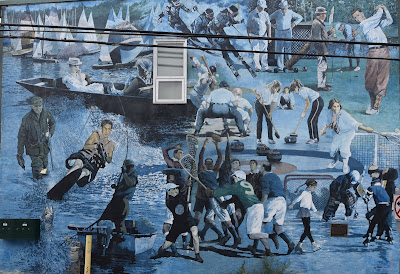 After walking through downtown the trail brought usto the waterfront. Kenora, which was originally called Rat Portage, is located on the shores of Lake of the Woods. 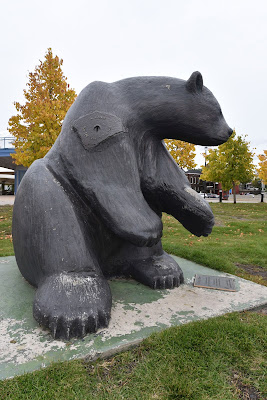 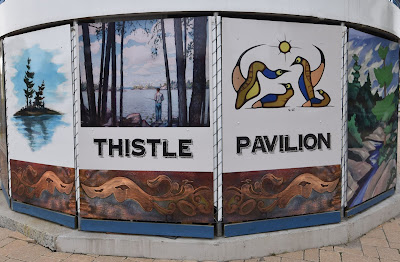 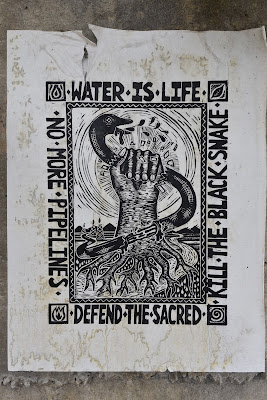 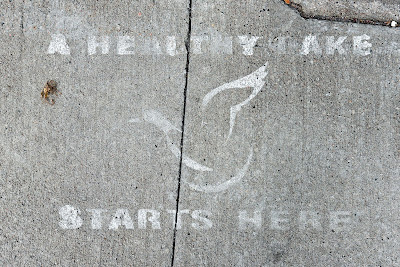 The land was originally in the territory of the Ojibwe. As we walked around the waterfront, we learned from historical plaques that Jaques de Noyon was the first European to visit this area in 1688. A French fur trading post, Fort St. Charles, was established nearby in 1732. The French lost the post to the British during the Seven Years War, and it was later taken over by the Hudson's Bay Company.

Kenora was also claimed by the province of Manitoba, leading to the Ontario-Manitoba boundary dispute. Between 1870 and 1884 both provinces claimed the town as part of their territory. In 1881 Ottawa ruled that Kenora was part of Manitoba, but the Judicial Committee of the Privy Council decided in Ontario's favour, and in 1889 Kenora became part of Ontario. The dispute likely had something to do with the gold deposit that was discovered in the area. 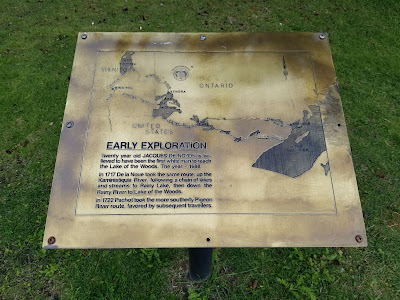 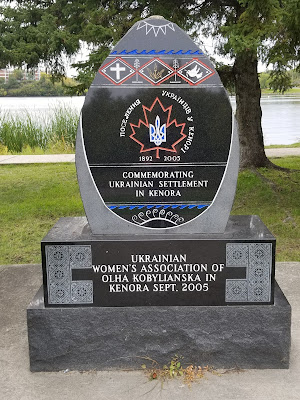 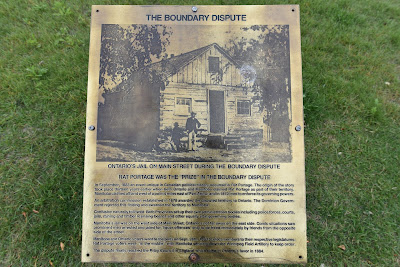 In the downtown core there was also a tribute to the Kenora Thistles, the local hockey team that won the Stanley Cup in 1907. Hall of famers Billy McGimsie, Tommy Phillips, and Art Ross were part of the winning team. Kenora is the smallest town to have won the Stanley Cup title.

As we continued around the waterfront on a treed trail past the marina, the Great Trail took us the town's mascot, and one of it's most recognizable features. Husky the Muskie is a 40 ft tall sculpture located in McLeod Park, which depicts a muskellunge. The first Huskie was constructed in 1967 for Canada's Centennial. The slogan for the giant fish is "Huskie the Muskie says prevent water pollution." 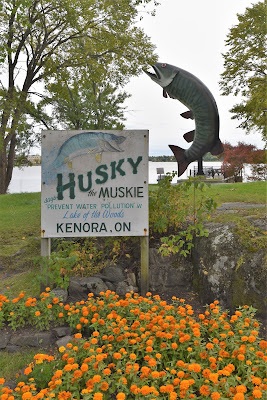 The giant sculpture was located in a beautiful flower garden. As we made our way through it a Canadian Pacific Railway train crossed the bridge over the nearby river. It took us a few moments to realize that it had scared three White-tailed Deer who were bounding as fast they could down the busy highway because of the train! 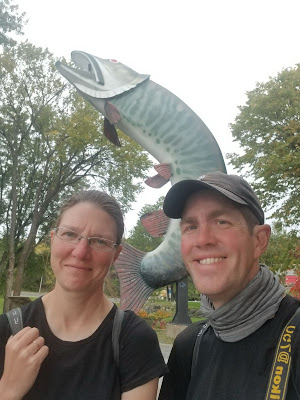 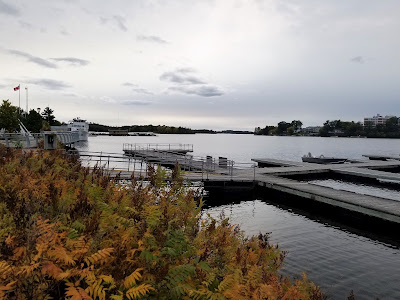 This section of Great Trail was an urban pathway that gave us a chance to visit and explore a small town we would probably not have come to otherwise. As we made our way along the waterfront, past the hospital, another stretch of motels and the information center, and past a Forest Products plant on the way in to Keewatin, we could see how water- based the culture here is. We passed many marinas full of powerboats, and quite a few of the mid-sized islands offshore had houses on them. We could see from the map that many of the tiny islands had picnic tables on them. Although we are heading in to fall, the sparkling blue waterways along the lake were still busy with boat traffic. 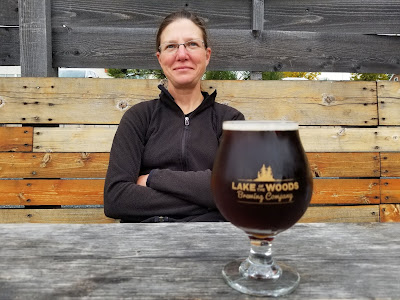 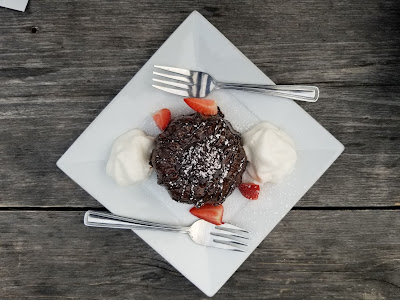 On our way back to the campground we stopped at the Boathouse for a celebratory drink and dinner on the lakeside patio. We have now completed our hike across Ontario. As we sit here, we wonder what comes next. Our next trek is not yet decided upon, it has been a source of constant debate and a decision that has been put off for more than 2500 km.

What's next? Only time will tell.