Pictou's The Advocate article - From screen time to green time 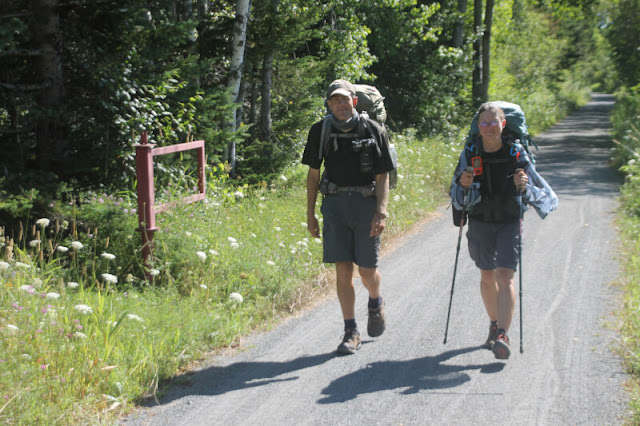 LYONS BROOK — Two hikers from Ontario hope they can get more people communing with nature.

Sonya Richmond and Sean Morton passed through Pictou County last week heading west along the 24,000-kilometre long Great Trail, formerly called the TransCanada Trail, with their goal over the next three years or more to get more people — especially young people — connected with nature.
Birding, or bird watching, is described as a form of bird observation for recreational and citizen science purposes.

Richmond is on leave from Bird Studies Canada. She sold her house and donated her possessions to help pay for the project. Many other groups have provided funding, sponsorship and other support.
“We’re trying to direct youth to nature through birding, get outside and enjoy the earth and change their screen time to green time,” she said.

Both Richmond and Morton are acutely aware of how spending too much time on social media can harm people.

“We found people who said their lives were becoming unbalanced,” Richmond said. “I was in the same place, staring at a computer screen all day.”

Richmond and Morton began their trek on June 1 at Cape Spear, N.L. Their backpacks are full and heavy, each weighing more than 20 kilograms. They contain food, a tent, a tarp and other items. Morton also carries a laptop, phone and camera.

Richmond uses walking poles, which have come in handy. “I like them for walking over streams,” she said. “They can be used for a clothes line, or to pitch a tarp or a tent.”

Sometimes they “wild camp” as they planned to do around Denmark, Col. Co.

They were in Pictou on August 13. Stops while here included the Hector Heritage Quay, the Northumberland Fisheries Museum and lobster hatchery and Lighthouse Museum before travelling on the Jitney Trail toward the Birchwood Campground and Cottages for their stay.

“When we have campgrounds like this — they have showers, laundry and running water — we love them,” Richmond said.  Birchwood also allowed them to recharge their batteries and devices. They sometimes stay at hotels for the same purpose.

“We were in parts of New Glasgow where the road is part of The Great Trail,” Morton said. “We average about 25 kilometers a day. We did 35 kilometers that day. That really hurt.”

Richmond and Morton have also been impressed with the people they have met and help they have received along the way.

“We’ve been told not to trust strangers (but) they’re wonderful,” Richmond said.

“We all have thoughts about what Newfoundland and Atlantic Canada look like, but you need to see it,” Morton said. “We’re amazed how people are helping us.”

Side trips and longer stops to meet people and appreciate the landscape and ecology have Richmond and Morton thinking their trip will take longer than planned. They want to complete the east-west trip to Victoria, B.C. and hope to travel on the Great Trail from Fort Saskatchewan, Alta. to Tuktoyaktuk, NT.

They were supposed to be in southern Ontario by Christmas but it’s looking more like Montreal will be their destination by that time.