Hiking Cape Breton Island, Nova Scotia on The Great Trail and the International Appalachian Trail has been an amazing experience. We've enjoyed highly varied and stunningly beautiful landscapes, diverse cultures, and the kindness and generosity of many Nova Scotians along the approximately 154 km of trail on the island. 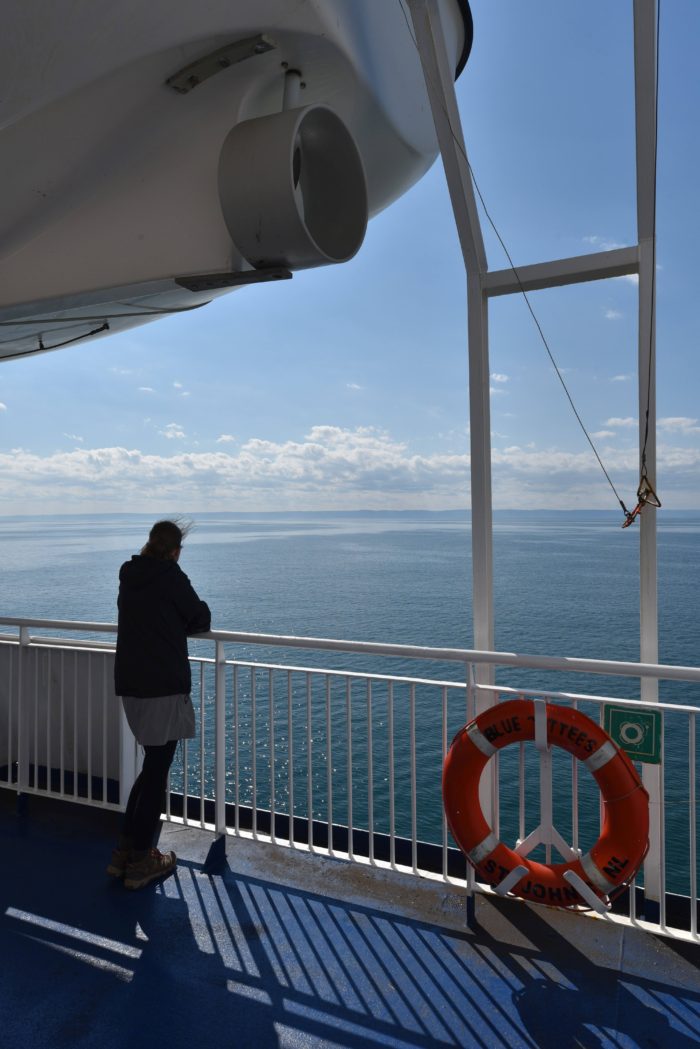 We arrived in North Sydney, Nova Scotia on the Marine Atlantic ferry from Port-aux-Basques, Newfoundland. To read more about our hikes on the East Coast Trail and later across Newfoundland on the Great Trail, or the T'Railway Trail, please check our past articles here.
The first section of The Great Trail on Cape Breton Island is a waterway from North Sydney to Whycocomagh that follows the shore of the beautiful Bras d'Or Lake. This brackish inland sea is surrounded by rolling hills, dotted with small islands and sandbars, and lined with long sandy beaches. It has been designated as a UNESCO World Biosphere Reserve due to the diversity of bird and marine life it contains, as well as the successful agreement between the Mi'kmaq First Nations and descendants from the Scottish, English, and French settlers to live sustainably within the watershed. We were privileged to see many Bald Eagles in this area, a testament to the thriving population in this region that was used in successful reintroductions across North America following the ban on DDT usage.
We did not paddle the waterway because we do have access to a boat.  As a result during this section we were invited by Parks Canada to give a couple of presentations at the majestic Cape Breton Highlands National Park.  While here we were fortunate to be able to hike many of the local trails and enjoy the coastline visiting beautiful waterfalls and coastal fishing villages en route.  Given our brief experiences we would certainly recommend that anyone who has the opportunity to cycle, hike, or explore Highlands National Park here in Nova Scotia to definitely take the opportunity to do so! 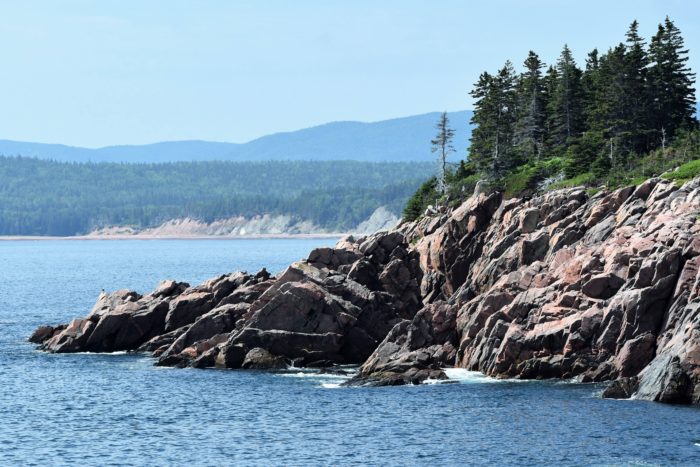 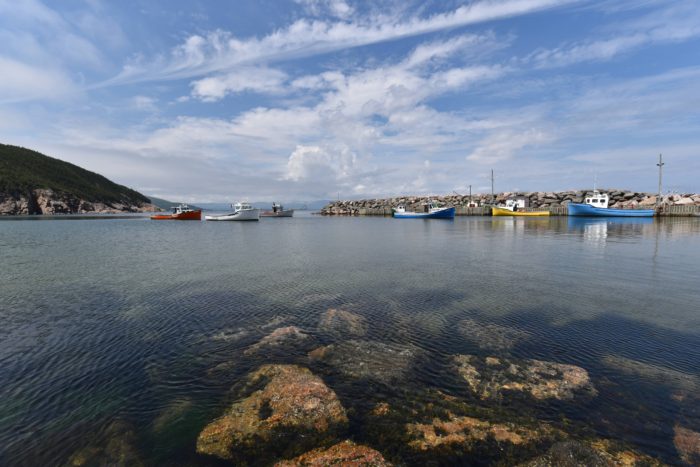 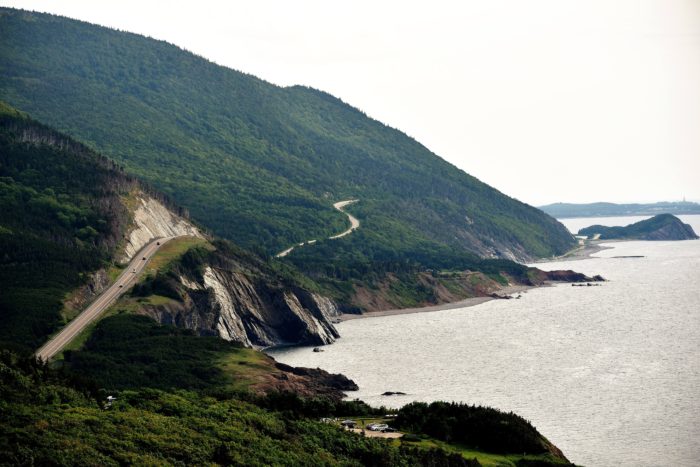 The terrestrial section of the Great Trail picks up in Whycocomagh, and from there the trail took us up into the rolling hills above the Bras d'Or Lake. The trail was a shaded, forested track that ascended 300 m up to wonderful view points, and then descended to lush, forested valleys, before climbing again. The rolling hills in this area are part of the Appalachian Mountains, and the rough winding trail feels wild and rugged. Much of the hike was through beautiful deciduous forest, far from developed areas, and it was easy to wild camp at the side of the trail. A highlight of this section was falling asleep in a deep river valley beside a rushing river and a small waterfall. 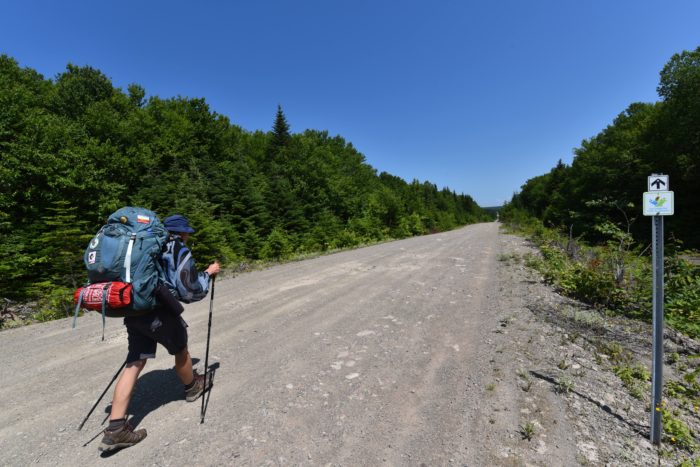 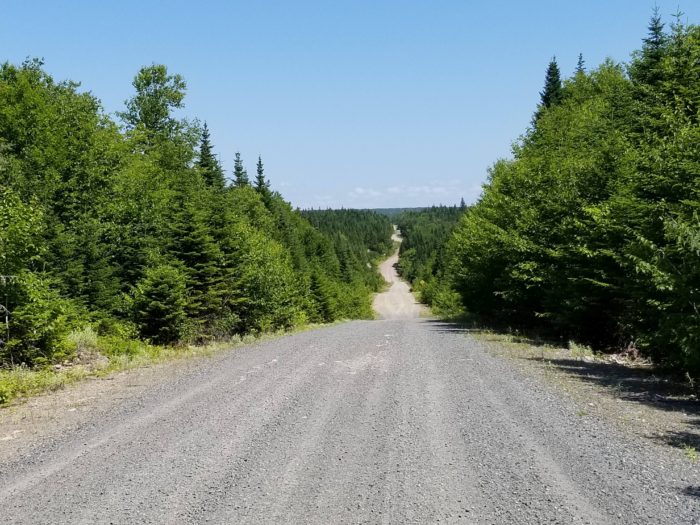 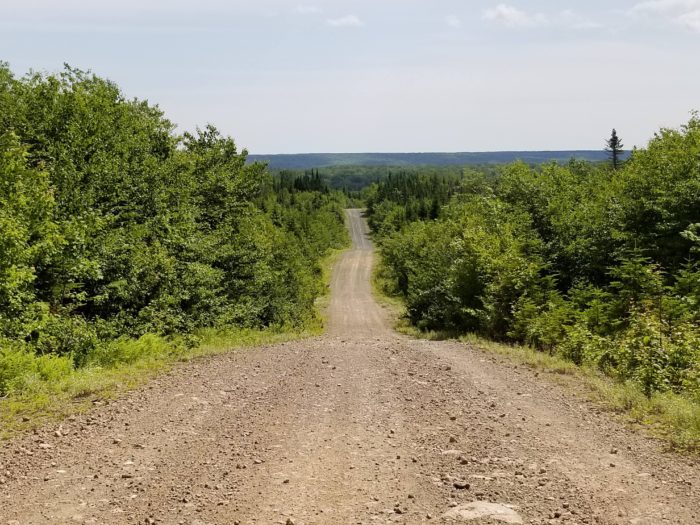 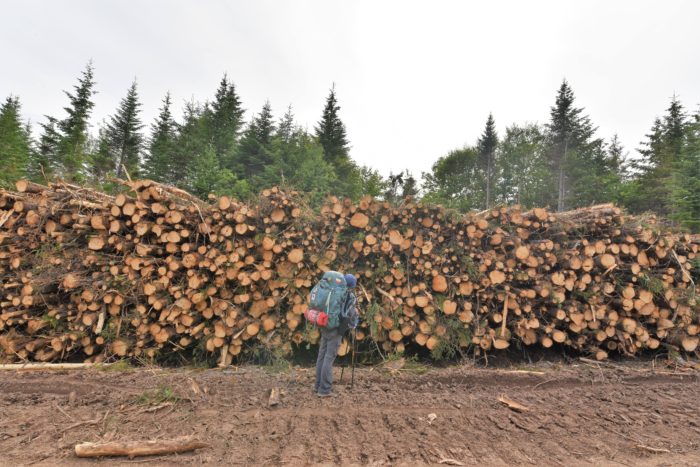 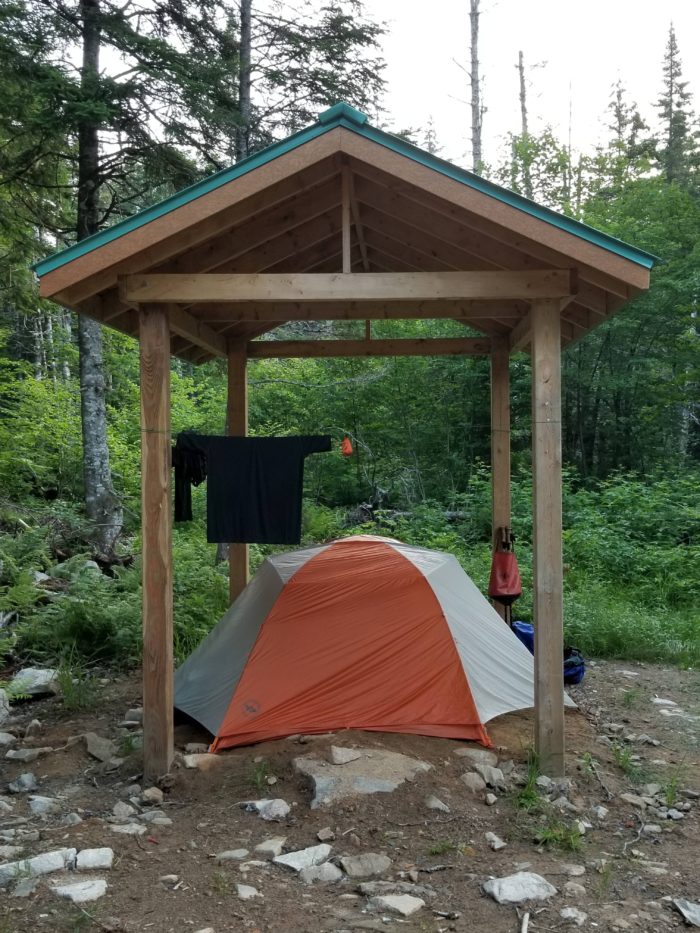 As we rounded the Trout Brook Nature Reserve and headed up to Inverness, we enjoyed a stunning view out over Lake Ainslie. In the higher, more open sections of trail we enjoyed the fragrance of fields of blooming wildflowers, and the songs of Chipping and Song Sparrows. The trail took us through some heavily logged areas, some of which were still being actively harvested, but we encountered few other trail users, and little development. 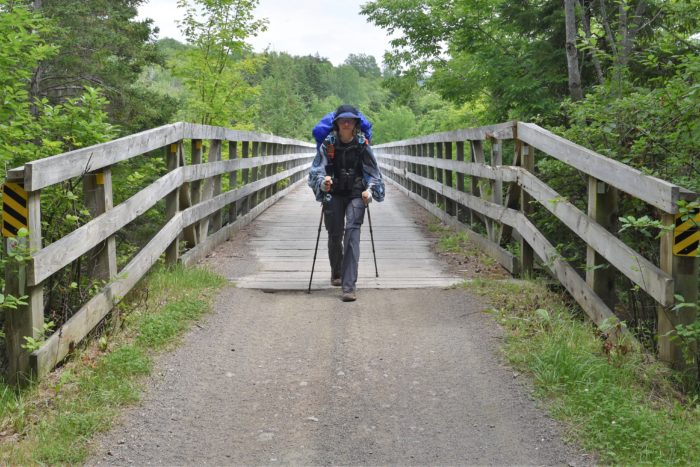 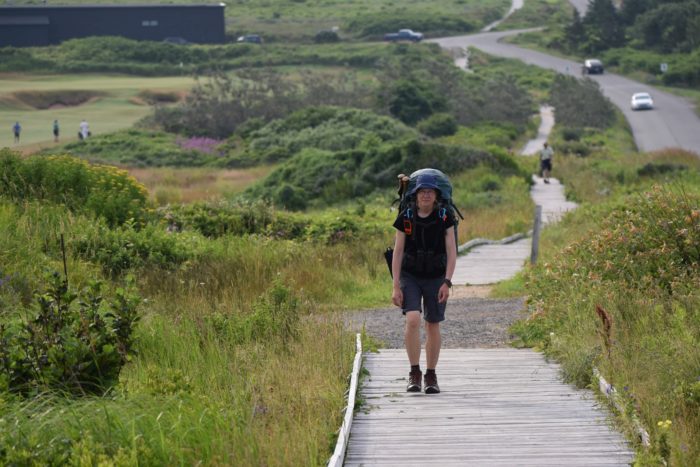 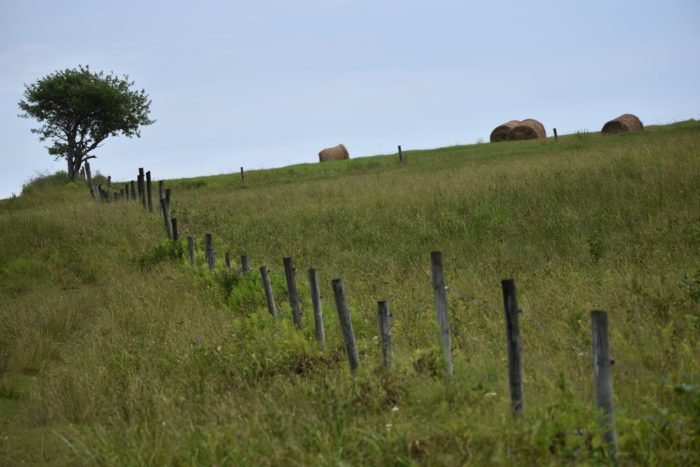 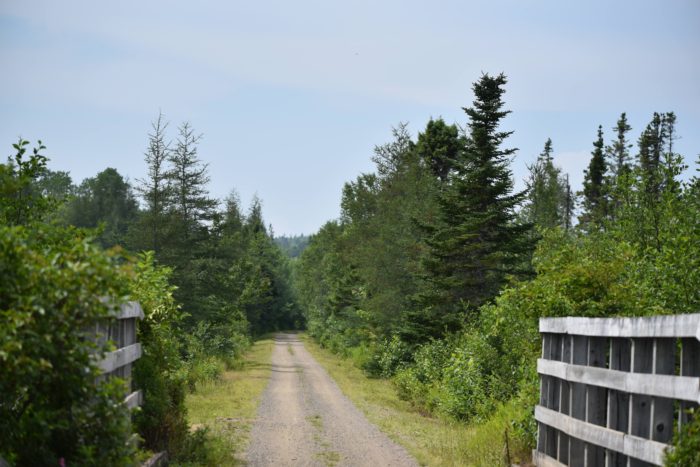 When we reached the town of Inverness we began walking the Celtic Shores Coastal Trail, which is one of the most well-groomed trails we've ever encountered. It is a flat, pea gravel trail, shaded in many sections, which offers lovely views over marshes, rivers, and the Atlantic Ocean. Inverness itself is a bustling tourist town with a world famous Golf Course right on the seaside cliffs, a resort, many shops and restaurants, a grocery store for resupplies, and a lovely campground. 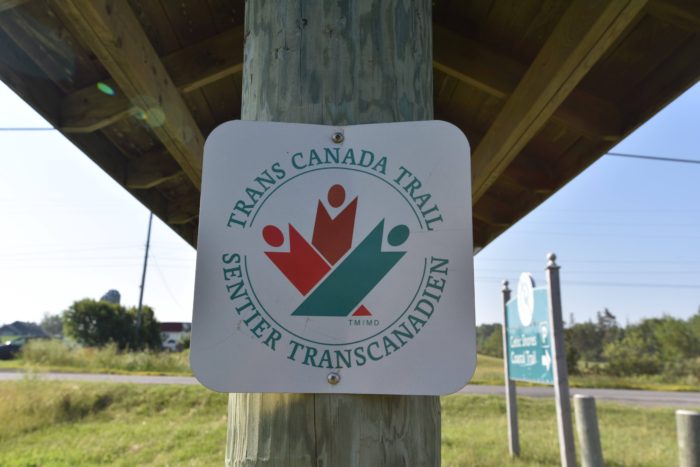 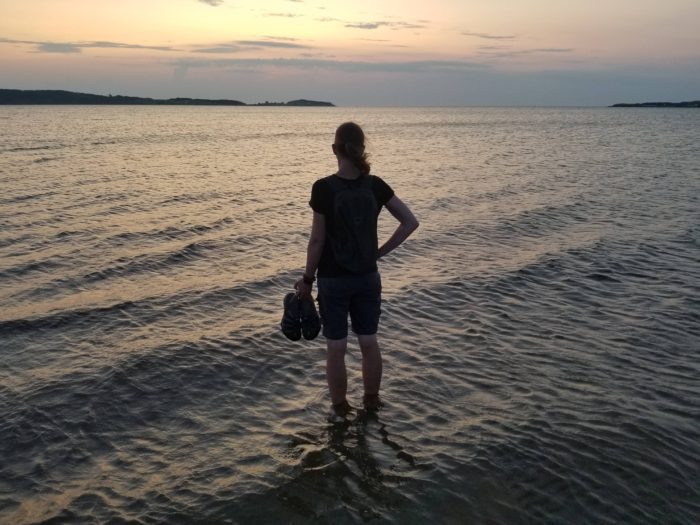 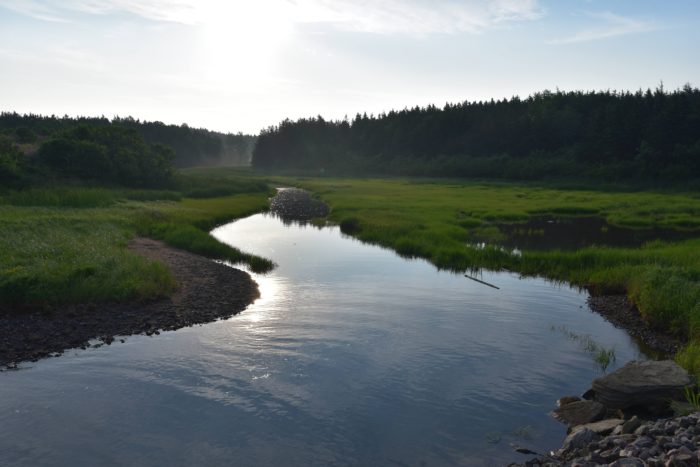 The Celtic Coastal Shores Trail is 90.6 km long, and runs along the northeast coast of Cape Breton from Inverness to Port Hastings, where the trail crosses onto mainland Nova Scotia. It is a beautifully manicured, mostly flat trail the entire length, complete with picnic shelters, benches, and interpretive signs. Although hiking conditions are superb, camping in this section can be a bit of a challenge. Freshwater sources are somewhat scarce, much of the trail is bordered by private property, and camping is prohibited in most of the communities it passes through. Bed and breakfasts are abundant and beautiful looking, but expensive. 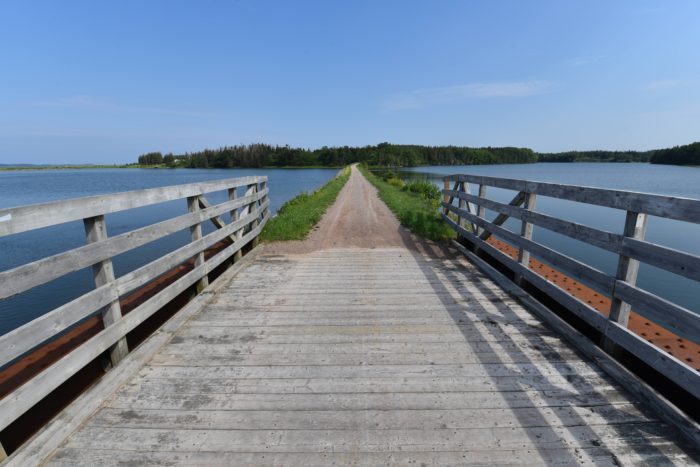 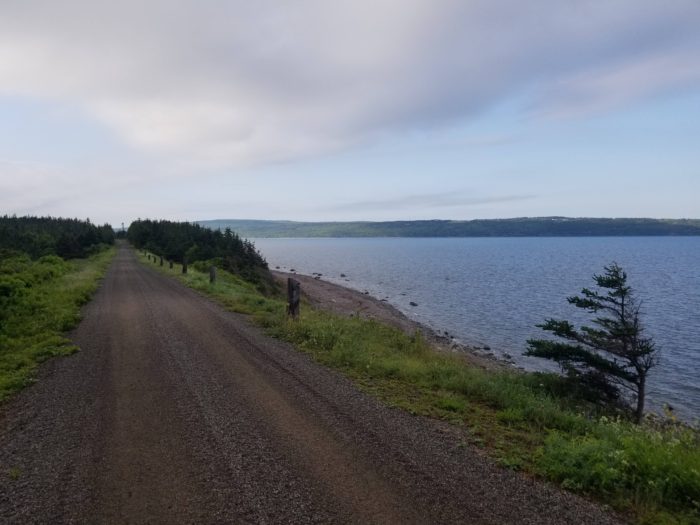 On our walk from Inverness to Mabou we crossed the Deepdale trestle bridge, which took us high above a river. We were very surprised to see three garter snakes sunning themselves on the bridge, one of which had just moulted. 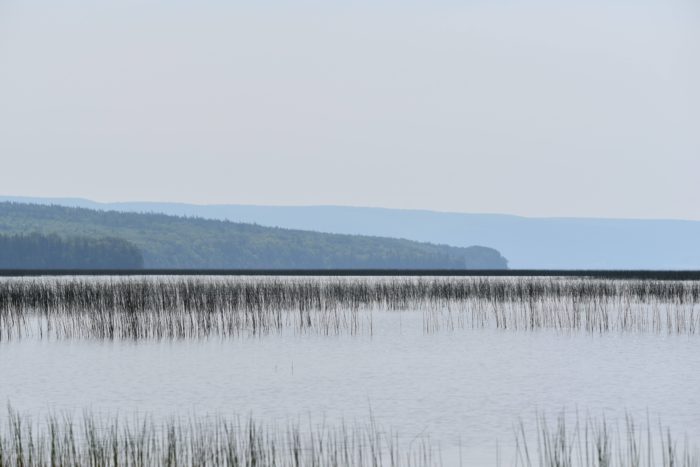 We then skirted the western shore of the beautiful Lake Ainslie, where we saw a Bald Eagle perched atop a dead snag, listened to the haunting call of the Common Loon, and watched a Great Blue Heron flying majestically past overhead. 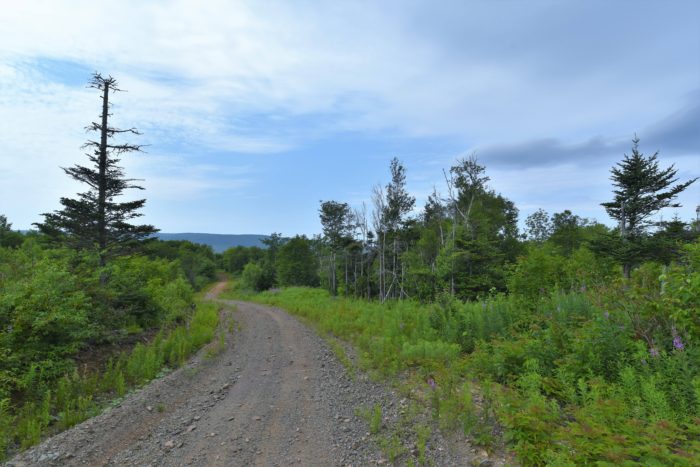 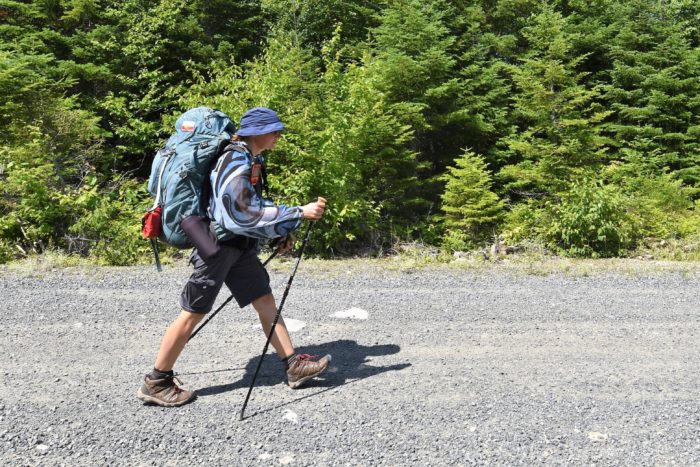 In the small community of Mabou we stopped at the Red Shoe Pub, which is run by the Rankin Family, to listen to the joyous fiddle music. Fiddling is an important part of the Scottish traditions of Cape Breton Island, and well worth a listen.

The next day was a very hot July day, and when we reached the town of Port Hood we deviated from the trail for a bit to walk the boardwalk through the dunes to the sandy beach. 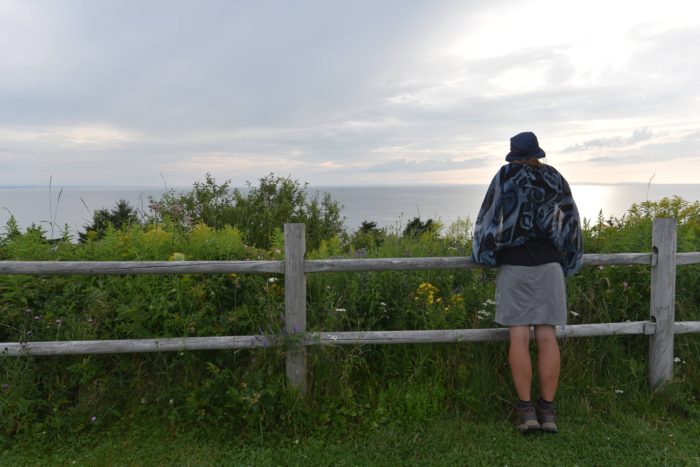 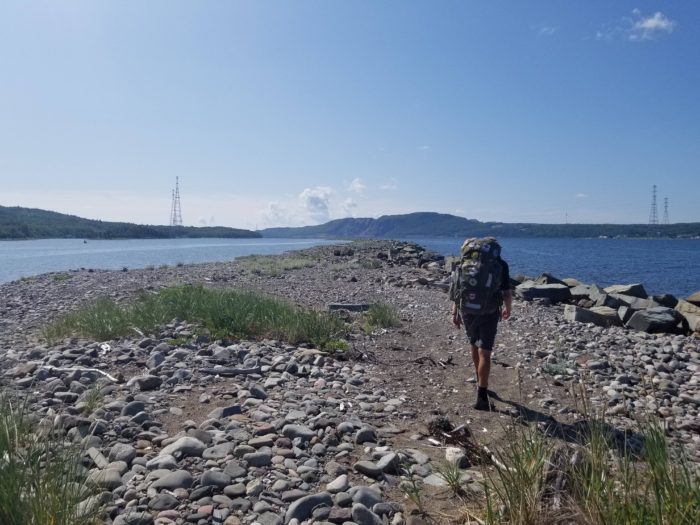 From Port Hood to Port Hastings the Celtic Shores Coastal trail followed the shore of the Atlantic more closely. We passed many salt and freshwater marshes, a few large rivers, and lots of sandy beaches. We also traversed sections of trail that took us along the cliff tops high above the ocean. This was perhaps the most wild and remote feeling part of this trail, but even here there we passed quite a few day hikers and residents out for a stroll.

Just before we reached the town of Port Hastings, the trail shifted abruptly from a well groomed trail to a dirt track, and then to a rocky beach. Ghost Beach is a 5 km long spit of land leading up to the Canso Causeway, which is surrounded by water on both sides. About half way down the beach we came to a break in the path where we had to wade through about 30 ft of Atlantic Ocean. It was only waist deep, and the day was very hot, so it felt good. We were left very thankful that the tide wasn't any higher, and that it was almost weather for our little crossing. 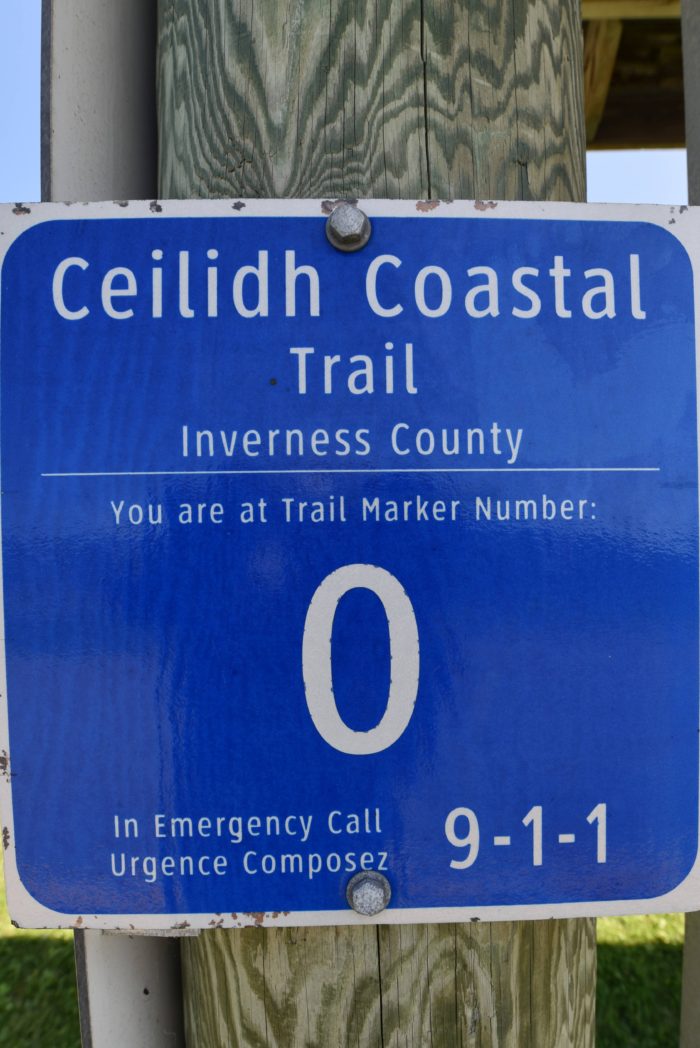 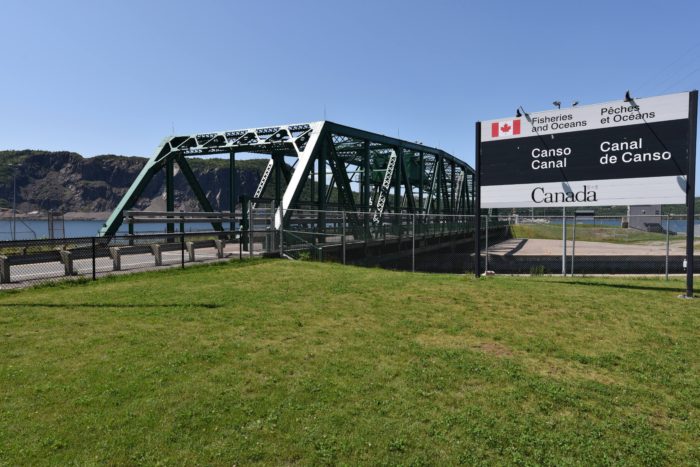 We enjoyed the stunning scenery, diversity of landscape, culture, and great birding of Cape Breton Island immensely. It is a fantastic place to hike, where the trail takes you to inland lakes, sandy beaches, remote forests, rolling hills, and many small communities, and offers great opportunities to experience the rich mix of French, English, Scottish, and Mi'kmaq cultures. 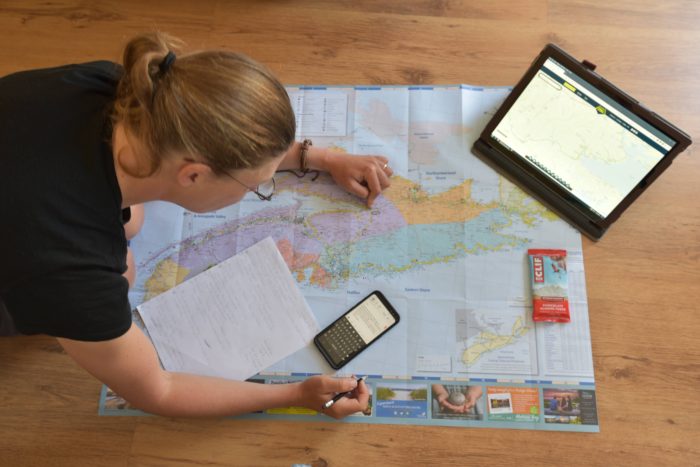 Next we travel to onto the mainland of Nova Scotia to continue our cross country trek along the world's longest hiking pathway, Canada's Great Trail, with just over 22000 km to go!
Posted by Sonya and Sean at 11:30 PM