We took a much needed rest day in the beautiful town of Russell Manitoba.  With over 1,500 residents it is one of the larger towns we've visited along the Rossburn Subdivision Trail, and it offers a full range of amenities as well as many opportunities to learn about local history. 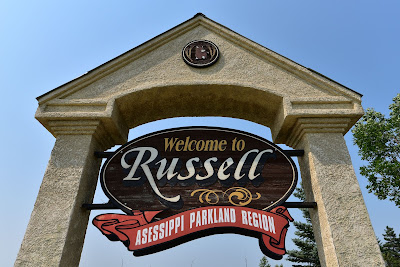 Russell was first settled by European-Canadians around 1880, when William Denmark built a homestead just north of the town site.  Col. A. Boulton also acquired a homestead in the area, and had the town site surveyed in 1881, naming it after his surveyor General Lindsay Russell.  In the fall of that year the Hudson Bay Company built a trading post on Main St. and the town began to grow.

We began our explorations by visiting the Millennium Park on the edge of town.  This large grassy area has a campground, which features a mural of the history of the town. 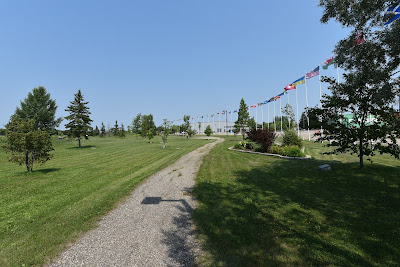 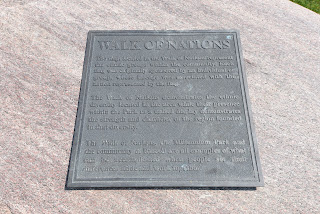 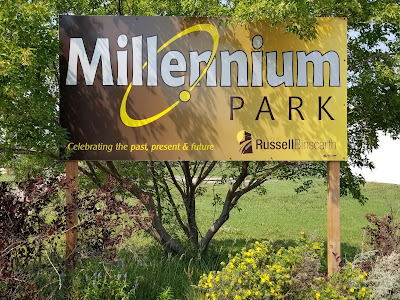 A little farther along we followed the Walk of Nations, which was a winding path under a long row of flags.  There were at least 29 flags representing the countries where the residents of Russell or their ancestors originated.  The accompanying plaque represented the ideals that diversity makes communities stronger, and that much can be accomplished when we put aside our differences and work together.

As we passed the community center we paused to admire two murals which represented prairie themes and positive ideals such as respect, love, and life.  As Sean was photographing them a group of very engaged and enthusiastic girls piled out of a van and one boldly asked if we were photographers.  Sean said we were hikers who were walking across the country, which seemed to spark a lot of interest.  They left with a cheerful "Welcome to Russell!" and an ongoing conversation about walking and adventures. 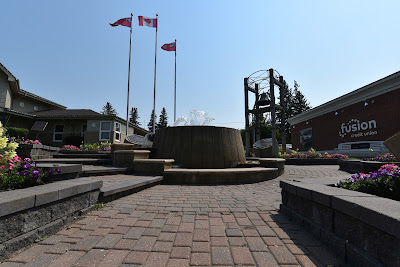 From there we made our way down the main street, which was tree lined and filled with restored old brick buildings.  There was a central square with a fountain and a bell, and each corner had a large planter with sweet smelling and brightly coloured petunias. 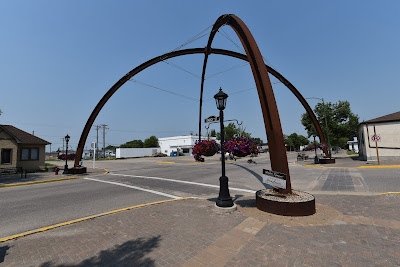 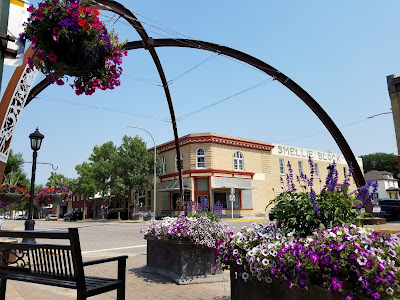 The most striking feature were the large metal archways that spanned Main St. at the major intersections. The pillars of each four-way structure were decorated with metal panels showing a different theme that represented part of the town's history.  Grains were shown on one, while farm machinery was on another.  One showed fashion, and another famous people who came from Russell. 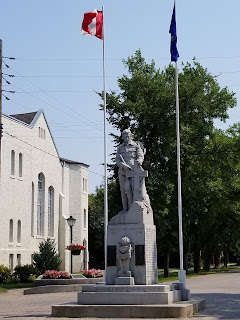 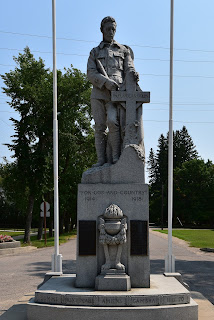 We continued down the main street and then explored a side street with huge old trees whose canopies met over the road.  In the center of one intersection was a statue and memorial to the soldiers who fought in the World Wars. 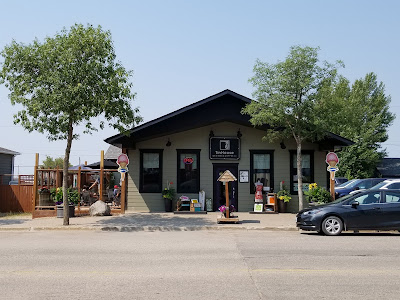 After our short tour we stopped in at a charming little café called the Tin House, which had delicious looking lunches, and ice cream.  We got two ice creams to go, and slowly strolled back to our motel.

Russell is a beautiful place to visit, and we greatly enjoyed all the history that is displayed throughout the town.  Each year it hosts the Beef and Barley Festival during the week before Thanksgiving, which features lots of events, competitions, and music.  The theme was chosen in honour of the area's high quality of farm production, especially in the area of beef and barley.  It sounds like it would be a lovely time to visit. 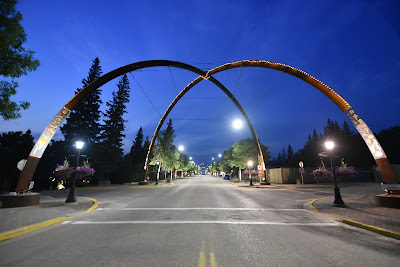 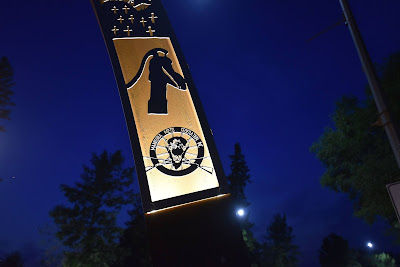 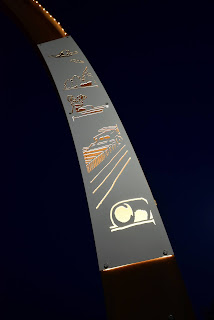 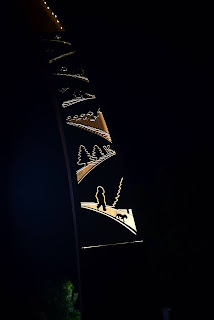