As we walked across mainland Nova Scotia on the Great Trail we were fortunate to observe 73 bird species over 36 days, bringing the total number of species for our cross Canada walk to 126. Many birds are quiet and secretive during the long hot days of August, and we spent many days walking along the baking hot shoulders of two-lane highways, so we are pretty happy with our modest findings. 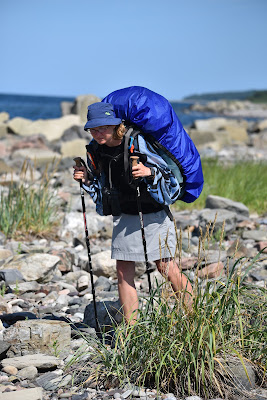 As we crossed the Canso Causeway on to mainland Nova Scotia we got a great view of an Osprey, the provincial bird, perched atop the bridge. The next 67 km of trail took us along roadways that skirted the Canso Strait and the beautiful Chedabucto Bay. In this section we saw Herring, Ring-billed, and Greater Black-backed Gulls, Double-crested Cormorants, a Great Blue Heron, several Belted Kingfishers, and a small group of Black Ducks. Although highway walking doesn't typically lead to too many bird sightings, one of the highlights of this section was encountering an extremely agitated and vocal Merlin perched in tree at the side of the road.

When we reached the beautiful, shaded, Guysborough Nature trail, which also took us through the Ogden Round Lake Wilderness Area, we had a chance to see and hear a variety of songbirds associated with mixed and deciduous forests. Highlights from this section included hearing a Black-throated Blue Warbler, watching a Black-throated Green Warbler feeding its family, hearing Wood Thrush singing us to sleep almost every night, having several close encounters with Ruby-throated Hummingbirds in the wild, and being startled by multiple Ruffed Grouse families as they erupted out of the trailside vegetation. There were many lakes in this stretch of trail as well, bringing with them the haunting calls of Common Loons.


The walk in to Sunnybrae along the Guysborough Rail Trail was somewhat exposed. During the hike we were very hot and beset by thick swarms of voracious deer flies. At a different time of year it would have been easier to enjoy the young regenerating forest, and the feeling of wildness that this stretch offered. Here we saw Blue Jays, American Goldfinches, a Hairy Woodpecker, and quite a few flocks of elegant Cedar Waxwings. Particular highlights were seeing a Brown Creeper making its way down the trunk of a tall white pine, an American Woodcock flying clumsily along the trail in front of us, and seeing a Great Horned Owl!


After a largely uneventful stretch of road walking in to New Glasgow, the Jitney Connector Trail took us from Pictou to Denmark. This forested trail crossed several rivers, skirted beaver ponds, and passed by marshes. The forested trail cut through a mostly rural setting and offered good opportunities to view forest songbirds. We particularly enjoyed finding a Broad-winged Hawk perched atop a snag in one of the marshes, hearing the raucous calls of Belted Kingfishers as they chased each other below him, and hearing Eastern Wood-pewees and Blue-headed Vireos in the forested sections.  We were also thrilled to see three Bonaparte's Gulls floating off shore in Pictou.


After another stint of road walking we entered the Gully Lake Wilderness Area. This is a fantastic piece of old sugar maple, white and yellow birch, and hemlock dominated forest with a very tall canopy and a well developed understory of ferns. The footpath took us through a stunningly beautiful landscape that felt wild and undisturbed. Highlights included seeing Ovenbirds, Black-and-White Warblers, Black-throated Green Warblers, and Dark-eyed Juncos, and hearing a Great Horned Owl hooting above our riverside campsite at Meguma Falls.

After a road walk to Truro, the Great Trail became a well-used municipal trail through town. Although it was raining, at times quite hard as we walked, we enjoyed seeing a Grey Catbird, Mourning Doves, a bedraggled Red-tailed Hawk and flocks of exuberant and chatty sounding American Goldfinches as we passed through.


Truro is located on the Bay of Fundy, and the Tidal Bore Interpretation Center offers not only a great view of the Tidal Bore, but also some great opportunities to see shorebirds and gulls out in the tidal mud flats. At the Interpretation Center, and along the beautiful Cobequid Trail on the way out of Truro we saw Greater Black-backed Gulls, Semipalmated Sandpipers, and Black-bellied Plovers.

After the beautiful Cobequid Trail, which took us along the Salmon River, we had another long section of road walking which essentially lasted until Musquodoboit Harbour. We made a stop at the Shubenacadie Provincial Wildlife Park, which is a wonderful place to learn about wetlands, and to get close-up views of some of the birds and other wildlife that inhabit Nova Scotia. Birding highlights included seeing a Great Horned Owl, a Barred Owl, two Bald Eagles, peafowl, a Barnacle Goose, and a Black Swan.

Once we got down to the Musquodoboit Trail we had a very enjoyable walk for the remaining 60 km into Halifax. The Musquodoboit Trail is beautifully forested, and offers a variety of side trips up to lovely views. This eventually turned into the Atlantic View Trail, and the Salt Marsh Trail near Cole Harbour, where the birding was all about shorebirds for us.

Our birding highlights along this coast included seeing flocks of Semipalmated Plovers, Semipalmated Sandpipers, Black-bellied Plovers, and Short-billed Dowitchers. We also saw lots of gulls, and enjoyed watching Common Terns fishing in the sea. Apparently all the species of owls that live in Nova Scotia have been sighted in the Salt Marsh, so this amazing beautiful spot is also a truly fantastic spot to go birding.

We would also recommend stopping to visit the Hope for Wildlife Rehabilitation Centre in Seaforth, just before Lawrencetown. This is an amazing place, and although the bird species they have in residence change depending on who needs assistance, it is a great place to support, learn from, and see a few birds close up. 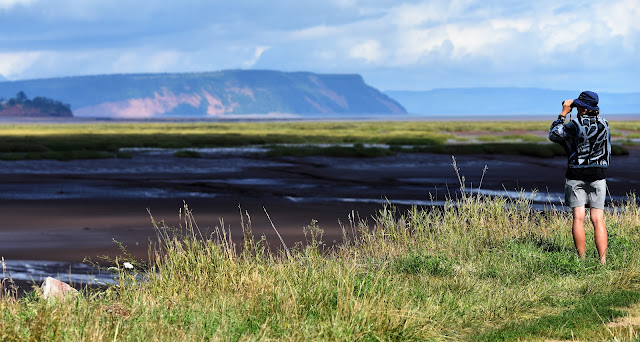 Birding Nova Scotia from the Great Trail has been a pleasure!  These are only a few of the amazing bird species we've seen along the way.  For a more comprehensive list please browse our daily blog entries. 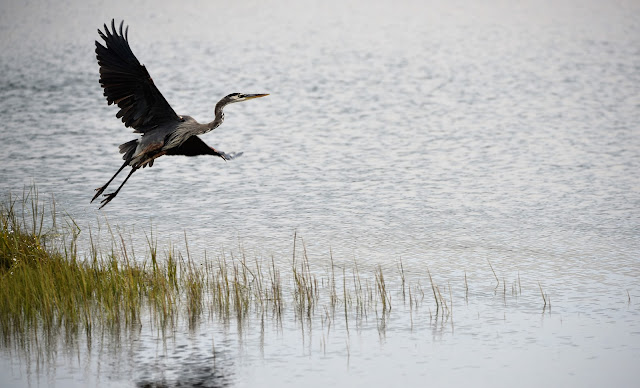